Poor Personal Hygiene Habits That Can Impact Your Lifespan

Ever since early 2020, the topic of personal hygiene has been discussed, dissected, and obsessed over like never before in history. Sure, we all knew how to bathe and brush our teeth every day, but all of a sudden things like hand sanitizers, face coverings, and practices like wiping off your cell phone all became part of our everyday routines like never before.

Still, given all that we know about proper hygiene in 2021, many of us still have so much to learn. (For more on that, continue reading.) After all, practicing proper hygiene is about more than simply trying to avoid looking like a slob, avoid smelling bad, attracting the opposite sex, or ensuring that you're not getting COVID-19. Science has shown that looking after your body is an important factor in not only your everyday mental health but also your physical health and your longevity. Curious to know the poor habits that can actually take years off your life? Read on, because here are just four of them.

And for more ways you can lead a cleaner, healthier life, don't miss The Secret Trick for Getting Fit Using Your Toothbrush.

Yes, nail biting is a bad look—after all, it projects nervousness and a lack of confidence—but it can also present significant dangers to one's health. Believe it or not, there are dangers related to the bacteria that can get on your hands and under your nails throughout the day.

Bacteria such as salmonella and E. coli can make themselves at home under your nails, and, if ingested, result in all sorts of gastro-intestinal unpleasantness and potentially serious illness. HPV is not uncommon among nail biters, and over the long term, some can suffer from an infection known as paronychia, in which bacteria sneaks into the abrasions around the tips of one's fingers, causing swelling and even puss to build up under the nails. For more on why you should always clean your hands properly, don't miss these 20 Facts That Will Change the Way You Wash Your Hands. 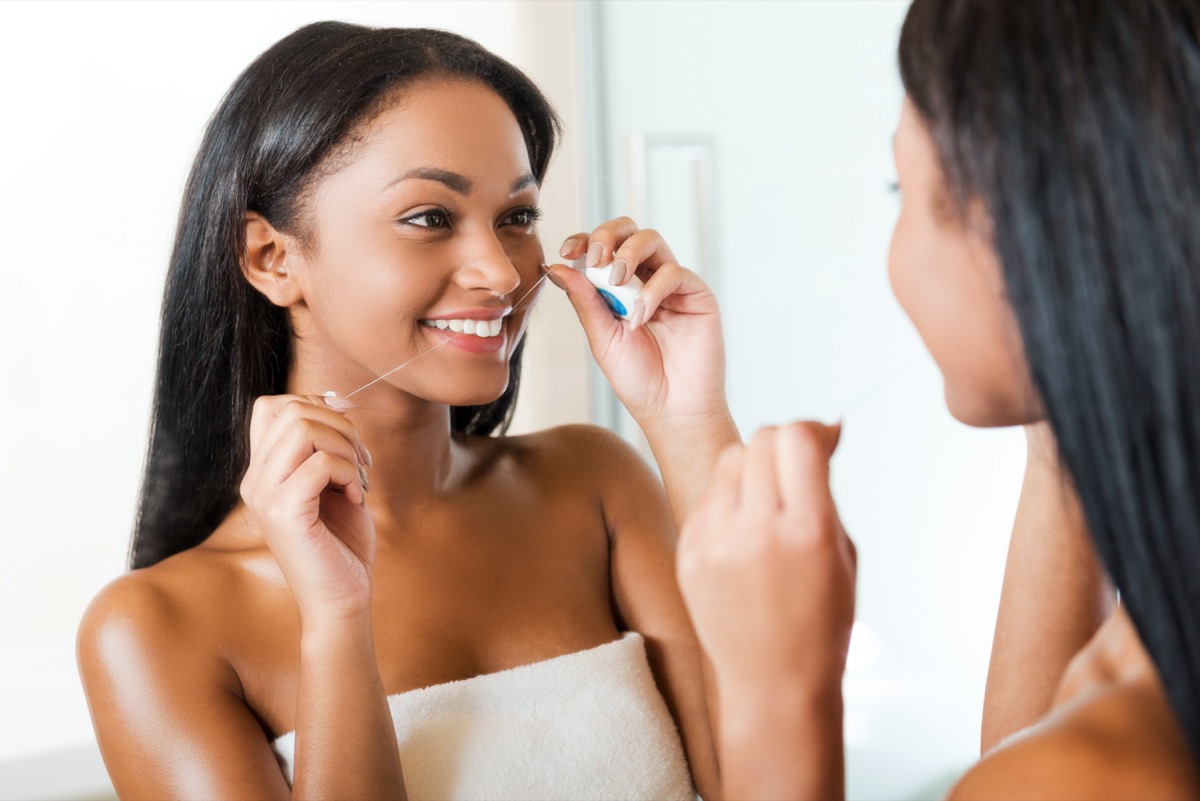 The American Dental Association advises flossing twice a day—and for good reason. Flossing promotes healthy gums while fighting plaque and reducing your risk of cavities. But the gum disease it helps fight has also been linked to cardiovascular disease—also known as the single biggest killer of people on the planet. People with gum disease are reported to have two to three times the risk of having a heart attack, stroke, or other serious cardiovascular event.

While there has not been a direct connection drawn between the two types of disease, Hatice Hasturk, DDS, Ph.D, of the Forsyth Institute, told Harvard Medical School that "Periodontal disease increases the body's burden of inflammation," which can be a major contributor to heart health. So grab that string of floss—it could save your life.

You're Not Washing Your Hands Enough

Hand washing has been deadly serious long before COVID-19 came along. As the Centers for Disease Control explains, "About 1.8 million children under the age of 5 die each year from diarrheal diseases and pneumonia, the top two killers of young children around the world." Hand washing is one of the most important things we can do to prevent the spread of illness, disease and resistance to antibiotics.

But despite this public information campaign, the CDC found as recently as October of last year that as many as one-quarter of Americans were not washing their hands. And if you are one of those people who "wash" but don't bother to fully soap up and leave your hands dangling under the water for more than 10 seconds, you're putting yourself at risk.

Your mom always told you that you should stand up straight—and how right she was.

The way you stand and walk can have significant effects on your health over the long run. Slouching or neglecting to sit or stand upright can exacerbate the effects of arthritis. As Chris Wolf, D.O., a sports medicine and regenerative orthopedic specialist at Bluetail Medical Group in Chesterfield, Missouri, told U.S. News & World Report, the misalignment caused by bad posture over time can "worsen the effects of arthritis by putting pressure on one part of the joint and causing pain. The pain can decrease your overall function and quality of life."

It can lead to other surprising results, such as constipation, heartburn, and slowed digestion. Bad posture can also have an impact on your mental health. A 2014 study published in Health Psychology found that subjects who sat upright reported higher self-esteem as well as a higher level of alertness and better mood than those who slouched. So stand up straight! And for more ways to ensure that you live a long and healthy life, don't miss The Secret Exercise Trick That Can Tell You if You'll Live Longer.