Here's how to spot the unhealthiest barbecue sauces.

With Labor Day right around the corner, it's safe to say that it's time to stock up on hotdogs, hamburgers, potato salad, corn on the cob, and other barbecue favorites. Now, to go with your holiday favorites, you'll want condiments like ketchup, mustard, and especially barbecue sauce. Whether it's for your ribs or hamburger, barbecue sauce is the perfect condiment to add a bit of sweetness and smoky flavor. While it can be delicious, it's not always the best pick for your health. Here's how to spot the unhealthiest barbecue sauces on the shelves.

"Many prepared BBQ sauces are loaded with added sugars and sodium," says Danielle McAvoy, a culinary RD and the Senior Manager of Nutrition for Territory Foods. "Any BBQ sauce containing high fructose corn syrup should be left on the shelf. Many also contain chemicals like caramel color and preservatives that should be avoided."

Keeping that in mind, here are nine of the worst barbecue sauces on grocery store shelves based on sodium content and added sugar that you might want to stay away from on your next shopping spree.

Out of every barbecue sauce on this list, this one has the highest sodium content with roughly 20 percent of the daily recommended value in just two tablespoons. If you're looking to limit your sodium intake whether that's to reduce blood pressure or for overall health, you'll want to refrain from this condiment at the grocery store. 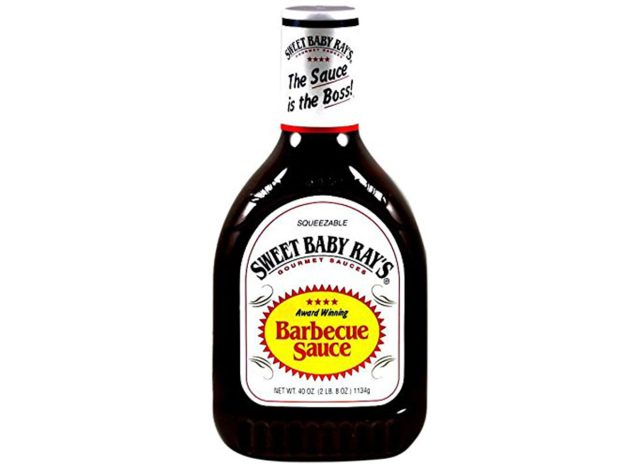 Breanna Woods, MS RD, registered dietitian for Blogilates, points out that this barbecue sauce has 16 grams of added sugar in addition to 13% of the daily recommended value for sodium in just two tablespoons. That's more sugar than one and a half Krispy Kreme donuts! Steer clear from this barbecue sauce when those cravings hit.

McAvoy says as a general rule of thumb the lower the added sugar the better— with 4 grams or less per serving being ideal. This barbecue sauce has nearly three times that amount and 70 calories per serving. The sodium level isn't horrible at roughly 12 percent of the recommended daily value, but you'll still want to keep an eye on portion size.

RELATED: We Tasted 7 Barbecue Sauces & This Is the Best

The first ingredient on this nutrition label is high fructose corn syrup which already signals a red flag according to McAvoy. "Look for brands that don't list a type of sugar (such as brown sugar, syrup, high fructose corn syrup, etc) as the first ingredient and instead list a whole food, such as tomatoes (crushed or paste)," says Sarah Koszyk, MA, RDN, dietitian and co-founder of MIJA. While the sodium count isn't that worrisome at around 350 milligrams, it's still a decent amount for two tablespoons.

While you may be able to get this barbecue sauce for an unbeatable price, that doesn't mean it's healthy. With 11 grams of added sugar, that's a fifth of the daily recommended value in just two tablespoons. Plus, its first ingredient is high fructose corn syrup which you'll want to avoid if you can.

Don't let the Whole Foods brand name fool you because there's still a significant amount of added sugar in this barbecue sauce—roughly one-fifth of the daily recommended value. With that said, the first ingredient is tomato puree and not a type of sugar giving it a leg up on the competition.

The first ingredient in this barbecue sauce is not sugar so it's definitely not the worst according to Koszyk. However, it does contain different gums which aren't good for your digestive tract and can lead to gastrointestinal issues like bloating and loose stool.6254a4d1642c605c54bf1cab17d50f1e

Out of every barbecue sauce, this one from Seed & Harvest has the lowest sodium content and a relatively low amount of added sugar. As Koszyk mentioned, it's better if the ingredient label lists a whole food as the first ingredient and this sauce has apple juice concentrate, apple cider vinegar, and tomato paste.

This organic barbecue sauce has the least amount of added sugar and sodium making it the least unhealthy on this list. With that said, it is the only sauce with one gram of fat per serving which is something to keep in mind as you shop. Also, the first ingredient is water, so don't expect a thick and rich barbecue sauce experience with this product.