This Is Secretly What's in Your Hot Dog

How about some sugar and mechanically separated meat?

Hot dogs are a quintessential summer barbecue staple, but oftentimes, the ingredients are far from what we'd deem necessary. From all the tall tales you've heard about franks — enter: pink slime and rodent remains — wouldn't you like to know what's really in that wiener before you hit up your next cookout or beachside BBQ?

We decided to take a peek at the ingredient lists of two popular hot dog brands: Ball Park and Nathans. Then, we enlisted the help of certified health and wellness coach and integrative nutritionist Molly Hoffman to go through each ingredient listed to review what it actually is as well as what effect it may have on your body.

Find out what these questionable terms really mean below. And just so you know, we're in no way trying to deter you from enjoying this grilling staple. Just order one of the healthiest hot dogs (listed at the end of this article), and jushe it up with these 16 Delicious Ways to Dress Your Hot Dog Beyond Ketchup and Mustard. 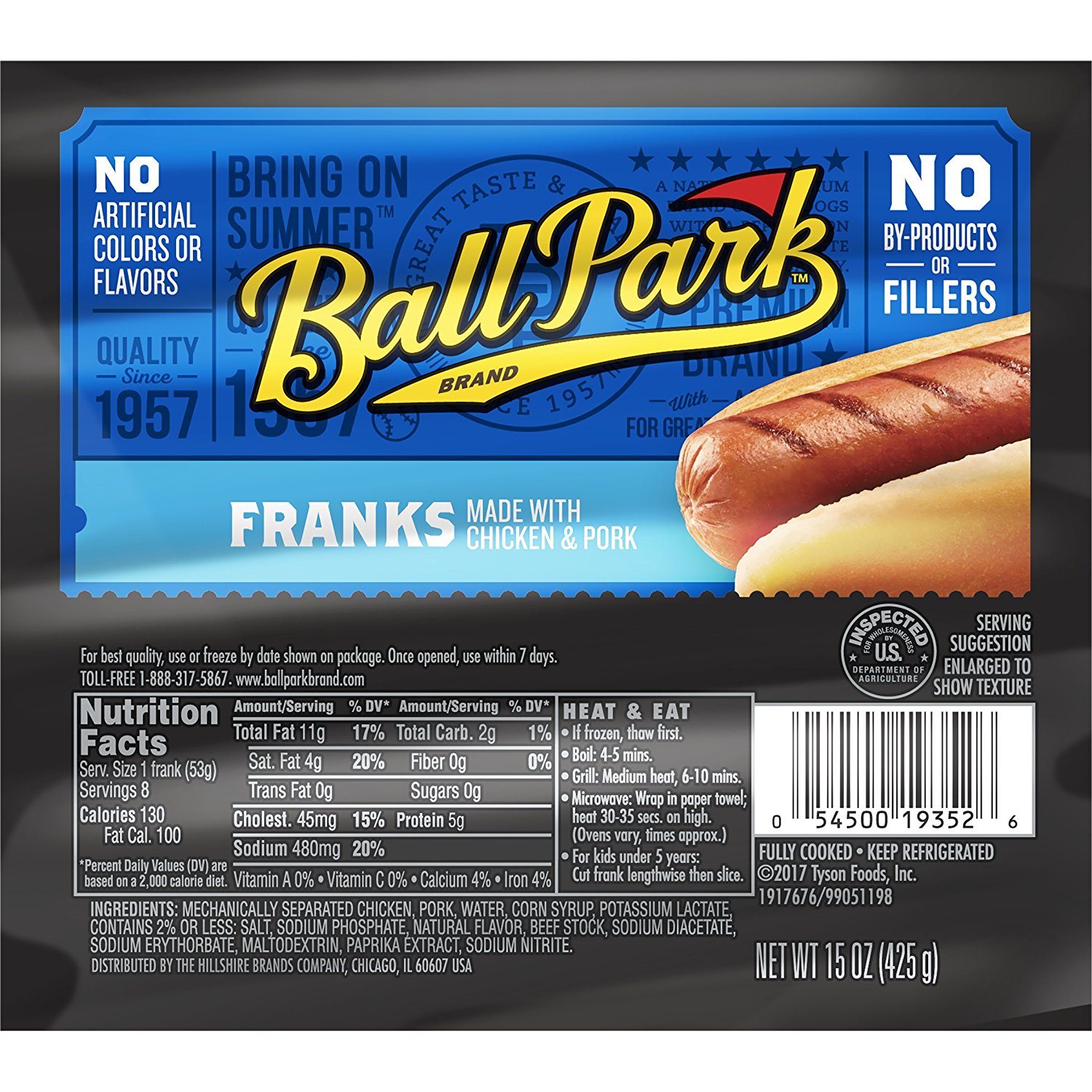 Now, let's dive into each of these to explain what they are, why they're in your hot dog, and what they can do to your body.

What makes mechanically separated chicken different than the legs and thighs you covet at barbecues? Well, it comes from the same animal, but it's the waste you typically set out for the garbage truck. See, in the '60s, someone in the meat industry began to question whether there was any use for the gristly pieces of meat left clinging to carcasses after the recognizable cuts had been removed. To answer the question, processors began siphoning animal remains — bones and all — through pressurized sieves that extracted all the edible pieces and churned them into a bright pink paste, according to the USDA. The goal was to wring every last dollar out of every last carcass, and a British chief trading standards officer estimated the cuts to be 10 times cheaper than traditional cuts. Today, mechanical separation is commonplace, and the extracted sludge is typically pressed into hot dogs, jerky sticks, and other processed deli meats.

Because it inhibits mold and fungus growth, potassium lactate is a commonly-used preservative in hot dogs and deli meats. You might see sodium lactate on other frankfurters' ingredient lists, as well. That's a type of salt "added to food to extend shelf life and inhibit the growth of pathogens in meat," Hoffman says.

"Don't be fooled by the word 'natural' as these flavors may be extracted via toxic chemicals that are not present on the food label," Hoffman says.

Sodium diacetate battles the pathogens introduced by unscrupulous farming practices. In April 2011, researchers in Arizona tested meat and poultry samples from five major US cities and discovered that 47 percent were contaminated with Staphylococcus aureus, the bacterial strain responsible for most staph infections. Worse yet, more than half were resistant to at least three classes of antibiotics. Where did these drug-resistant superbugs come from? It's suspected that by constantly pumping farm animals full of bacteria-fighting drugs to promote growth, food producers have encouraged the growth of stronger bacterial strains.

According to the FDA, 80 percent of the antibiotics sold in the US are used on animals, not people, and that's why we need additives like sodium diacetate: to protect us from our own food system. (It's enough to make you want to stock your kitchen with meat-free proteins.) And the sodium erythorbate on the ingredients list? That's "a preservative usually added to meat to maintain aesthetics," Hoffman adds.

The most controversial additive on this ingredient list, nitrites and nitrates are unsettlingly common in the deli cooler, and they play roles in curing and preserving the pinkish color of meats and fish. "Sodium nitrate is a food preservative used to maintain artificial flavors, create appealing colors, and add flavor to processed meats like hot dogs. The World Health Organization (WHO) has declared Sodium nitrate as a 'probable' carcinogen," Hoffman says. Trouble is, once ingested, nitrites can bond with amines to form cancer-causing nitrosamines.

You might think that all the poultry being pumped into hot dogs has made them leaner over the years, but the numbers don't lie. According to the USDA, in 1937 the average hot dog was composed of 19 percent fat and 19.6 percent protein. The humble frankfurter has plumped up quite a bit in the last 75 years; today, hot dogs contain about 28 percent fat to just 11.7 percent protein. Ball Park, one of America's iconic dogs, fares even worse. 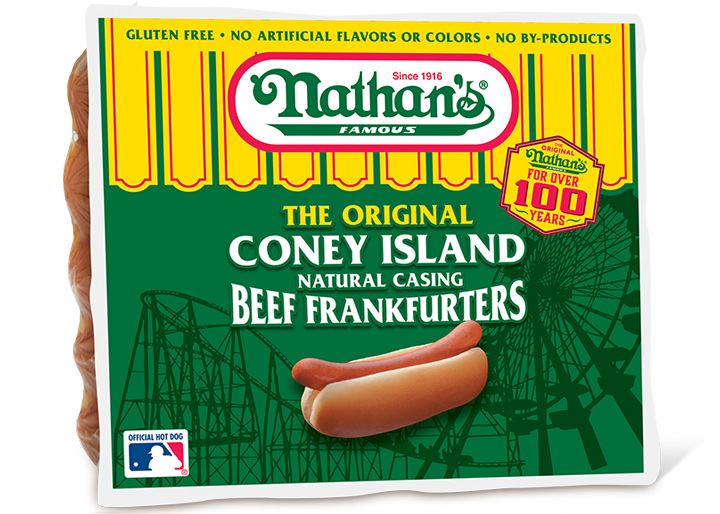 As for other hot dog brands, such as Nathan's: "Although the first ingredient in Nathan's hot dogs is highly recognizable 'Beef,' you should consider where the meat came from. It is highly likely that the non-organic beef hot dogs are produced from low-quality scraps with an abundance of added hormones," Hoffman warns. Nathan's Original Beef Frankfurters may have "Natural" plastered on their labels, yet they're anything but. If you plan to pick up a pack of these dogs before grilling, you'll some other sketchy ingredients on its list. Take a look:

"Sorbitol is a highly processed sugar alcohol that can cause digestive distress like gas and bloat. Definitely not something you want to have at a pool party!" Hoffman states.

"Sodium Phosphate is a food additive used to keep processed meats moist. Historically it was used as a treatment for constipation as it can cause stomach upset. Additionally, too much of this additive can cause an imbalance of minerals in the body like calcium, and eventually cause osteoporosis."

"Hydrolyzed Corn Protein is a flavor enhancer that contains glutamic acid. Many are familiar with the sodium salt version of glutamic acid called MSG which can cause migraines, heart palpitations, shortness of breath, increased risk of obesity and increased LDL cholesterol (just to name a few!)," Hoffman says.

What hot dogs to buy

In its best, most unadulterated form, a hot dog can still be a solid meal option, but you must choose wisely.

For your dollar, Applegate Natural Beef Hot Dogs, Teton Waters Ranch's Uncured Beef Hot Dogs, Fork In The Road Foods Honest Dogs, and Organic Valley Uncured Organic 100% Grass-fed Beef Hot Dogs are four of the best hot dogs for weight loss because they're made from grass-fed beef and spices. For more clean, unmysterious meats to throw on the grill, check out these 29 Best-Ever Proteins for Weight Loss.

April Benshosan
April is a born-and-raised Brooklynite who has a passion for all things health, wellness, and tastebud-related. Read more about April
Filed Under
Food & Nutrition // Healthy Foods // Unhealthy