36 Best and Worst Foods for Barbecues

Here's exactly what you need to buy to ensure your summer cookout won't balloon your bod.

Is there anything better than an outdoor BBQ and noshing on good food with your buddies during the summer months? We think not! But you probably know by now just how toxic some foods can be. Not sure what's good news for your gut and what should better be left on the shelf? That's what we're here for!

Stock up on our go-tos (and stay away from our Not That! picks) and you'll be prepared to throw a killer BBQ at a moment's notice. Better yet, you'll be able to maintain your flat abs without sacrificing the classic summer foods you love. Speaking of summer foods, don't miss our picks for the #1 summer food in every state. 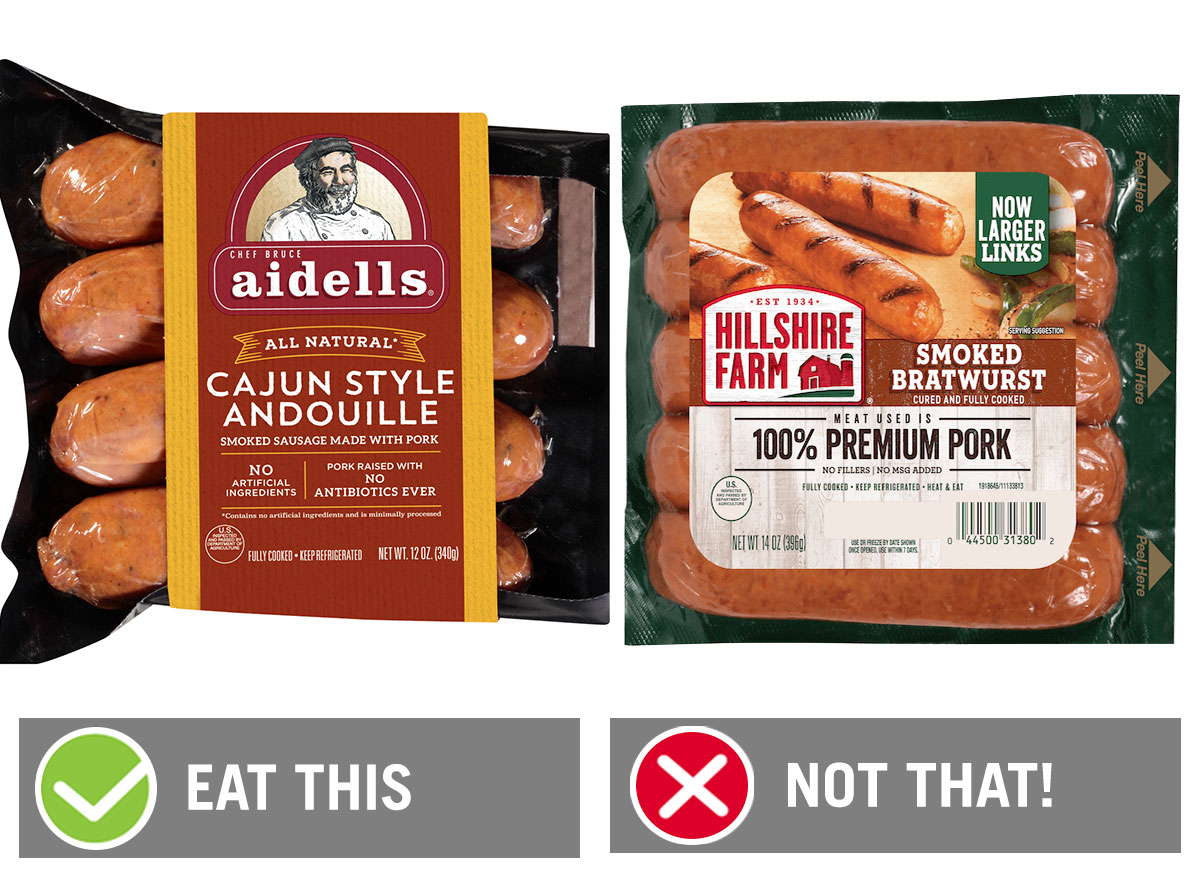 Over 75 percent of the calories in Hillshire Farm's smoked bratwurst come from fat, and these brats have less than half the amount of protein compared to Aidells Cajun Style sausage. Not to mention, Hillshire Farm fills their meat with health-harming sodium nitrites—yuck. We'll take Aidells' lean, flavor-packed pork all summer long. 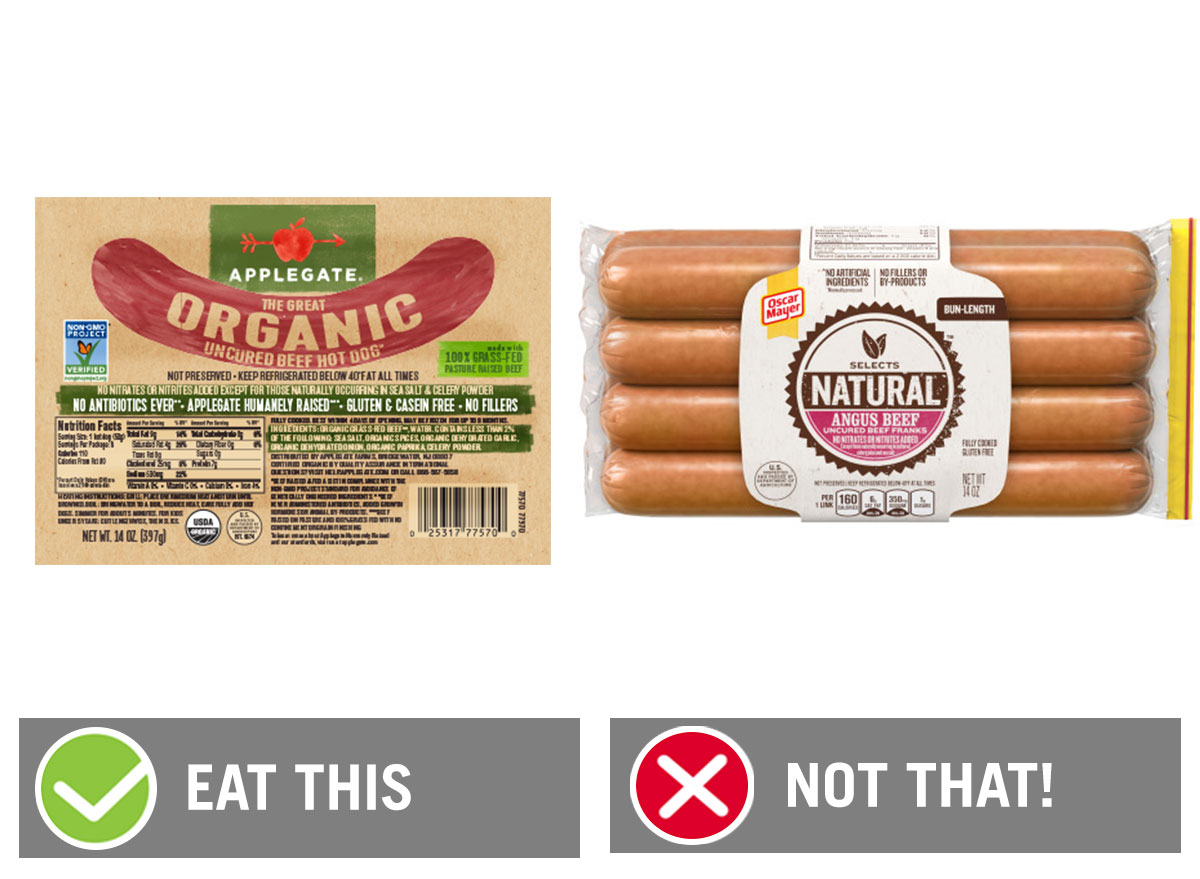 This is an easy choice. Applegate uses lean, preservative-free meat to create a dog with more protein, fewer calories, and less fat than Oscar Mayer's frank. Not to mention, Angus beef is no leaner—and arguably no tastier—than regular beef. 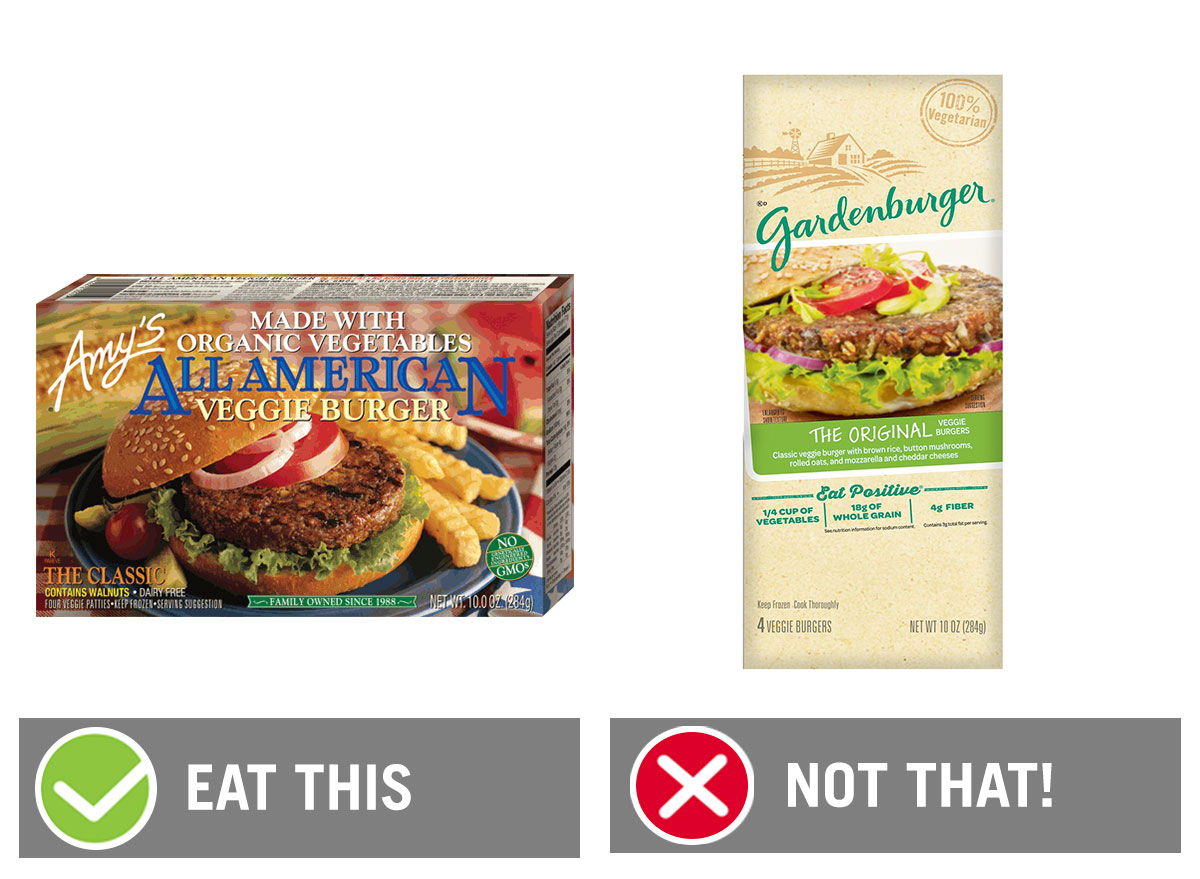 Amy's packs plenty of protein into their patties while keeping calories low, which is exactly what you want in a meat substitute. Unfortunately for Gardenburger, we can't say the same about their burgers. Plus, Gardenburger adds gums and yeast extract to its blend. 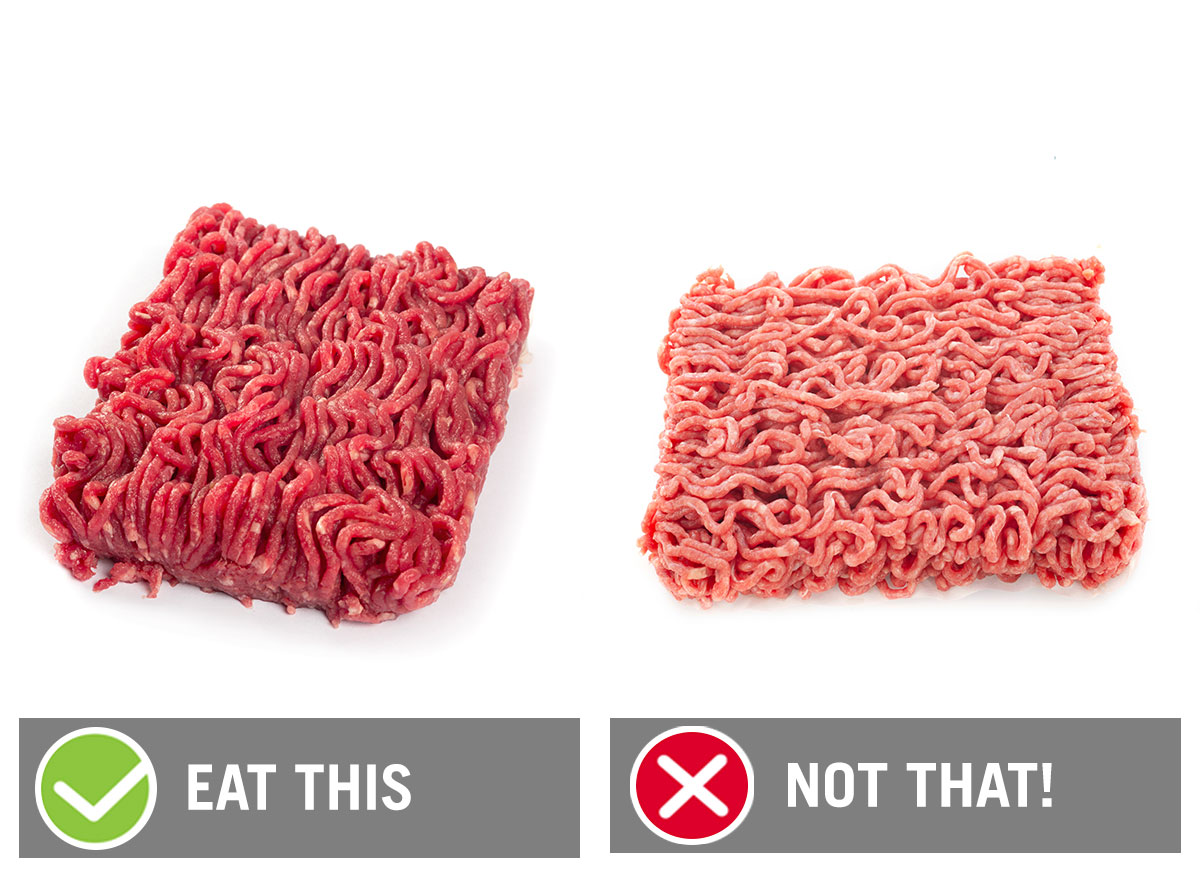 Opting for 95% lean over 85% doesn't just save you 10 grams of fat—it also slashes the saturated fat and keeps excess calories in check. Keep the lean burger meat from drying out by mixing it with minced button mushrooms, peppers, onions, or a combination of all three. For every cup of meat, use a quarter-cup of vegetables. Sure, it's more expensive, but choosing grass-fed instead of conventional beef is the best bet for your health. Meat from these specially cared for cows provides more heart-healthy omega-3s. 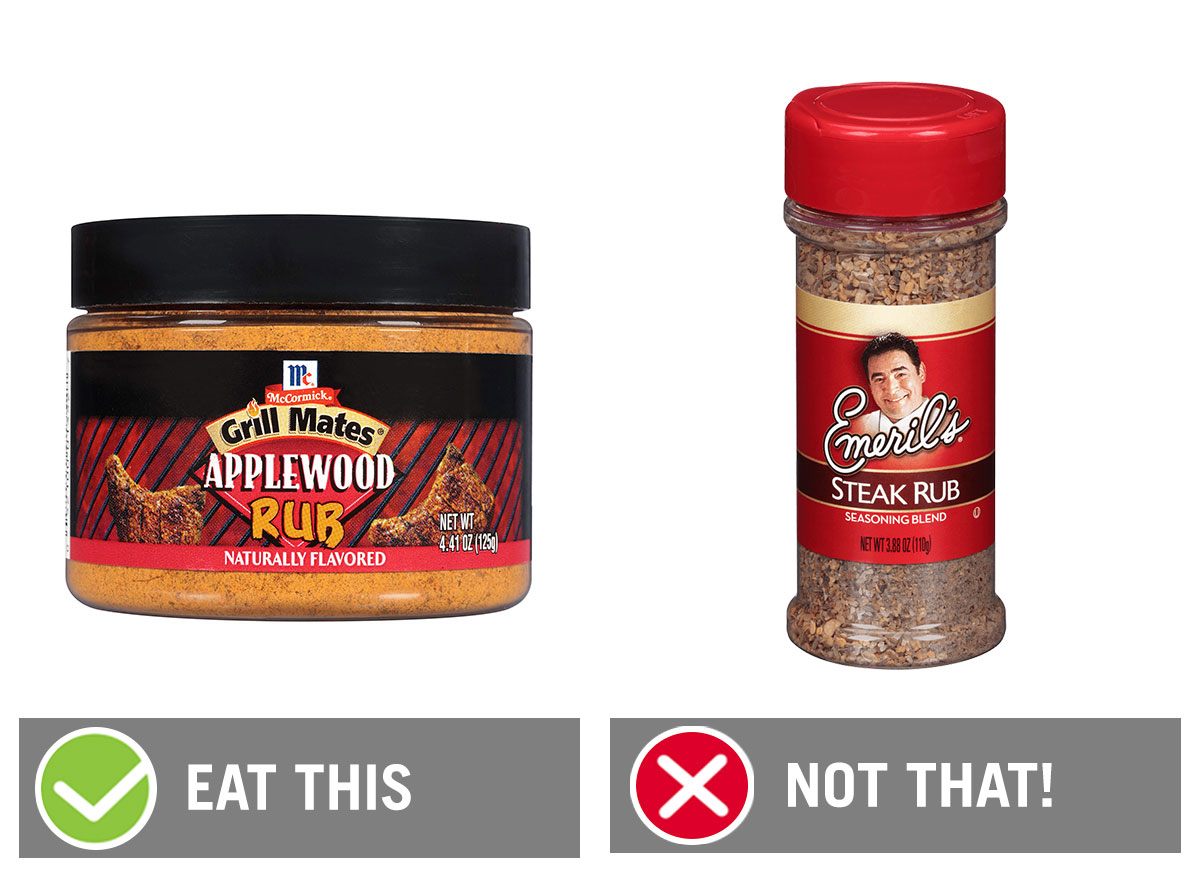 A rub is great for adding flavor to family dinner classics like chops, chicken, and steak. We're big fans of McCormick's smoky rub because it has a hint of sweetness and is relatively low in sodium—a rarity in this category. Just look at Emeril's: It serves up almost a full a day's salt in just two tablespoons! Just thinking about that makes us thirsty. 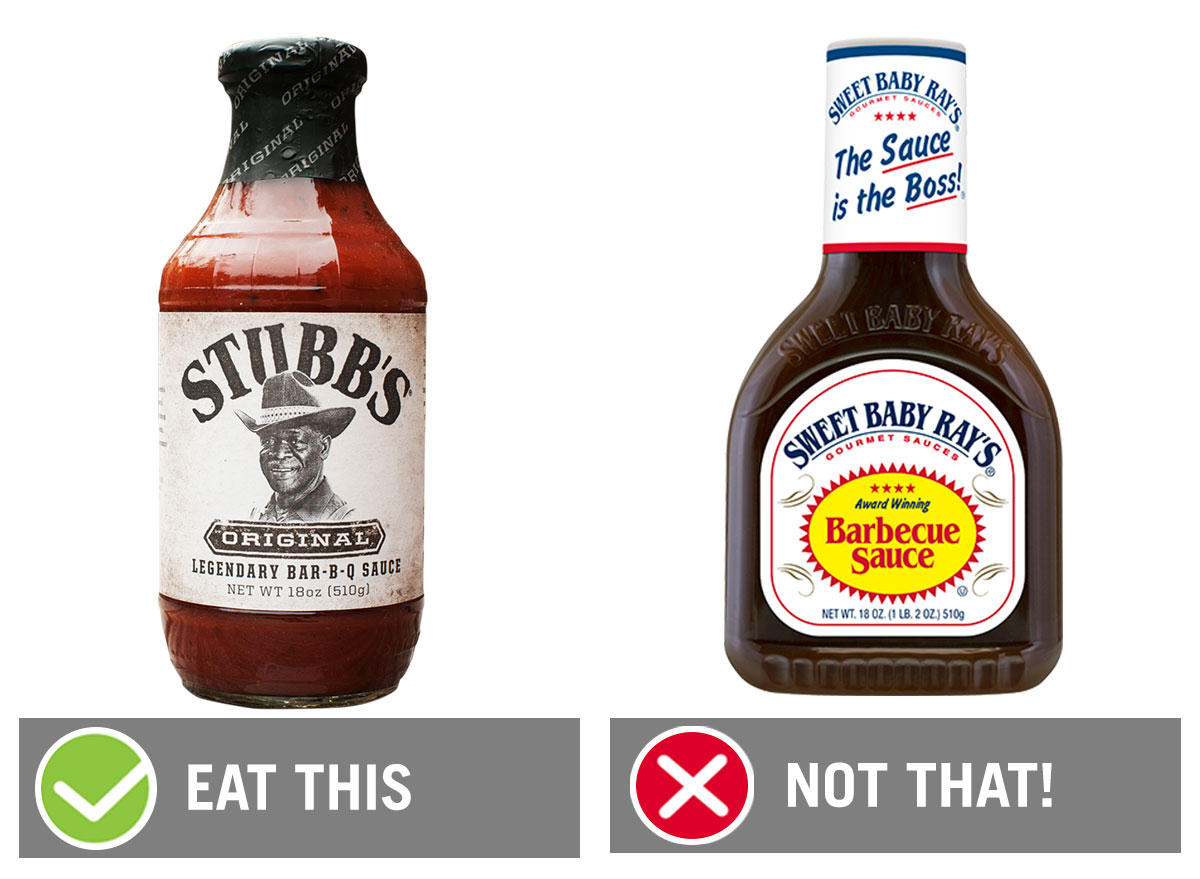 High fructose corn syrup (an additive shown to increase appetite) is the primary ingredient in Sweet Baby Ray's sauce, which is why it packs almost three times as many calories as the bottle of Stubb's. Stubb's also serves up a robust flavor without packing in a ton of sugar or salt, an attribute we're big fans of. We know which bottle we'll be using. 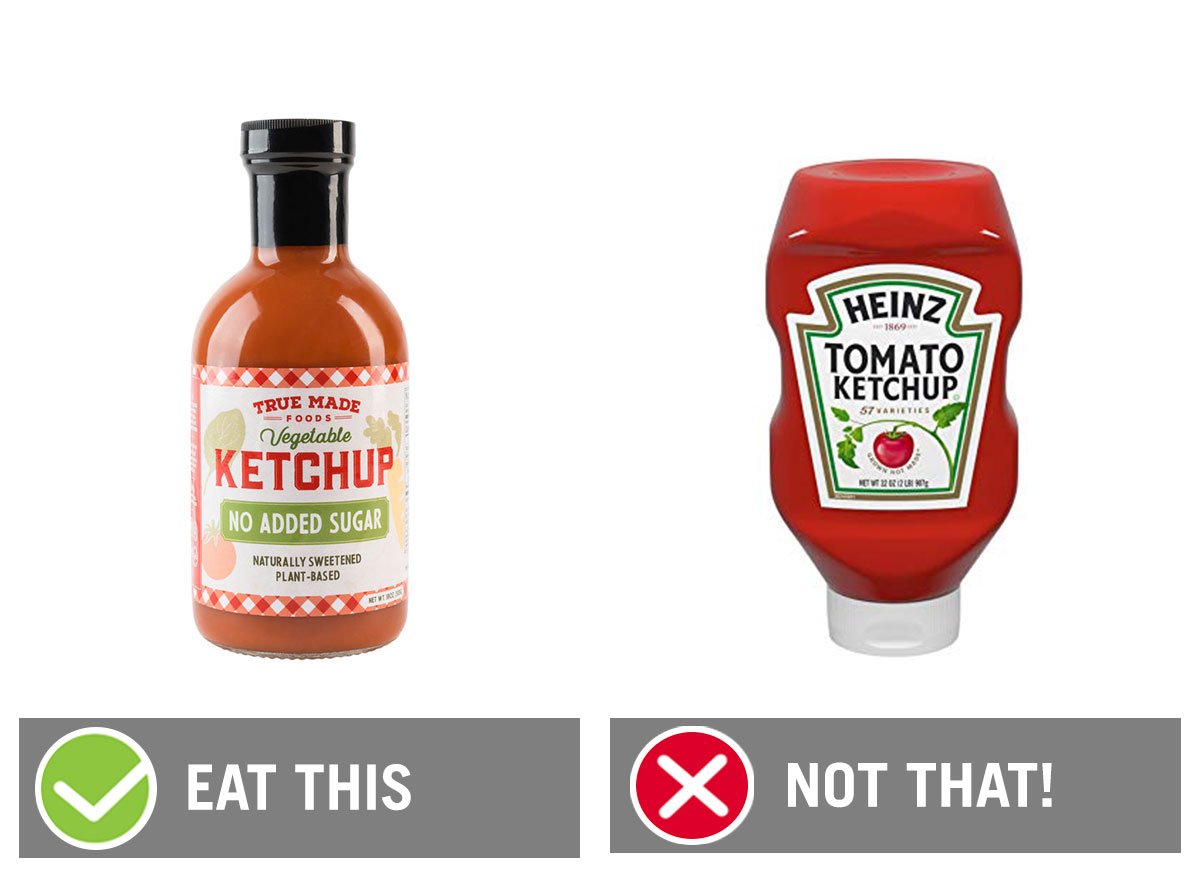 It may cost you a few bucks more, but go ahead and spring for True Made Foods Vegetable Ketchup. Unlike the high fructose corn syrup found in Heinz, True Made Foods naturally sweetens its condiment with fruits and vegetables, making this ketchup paleo-friendly. 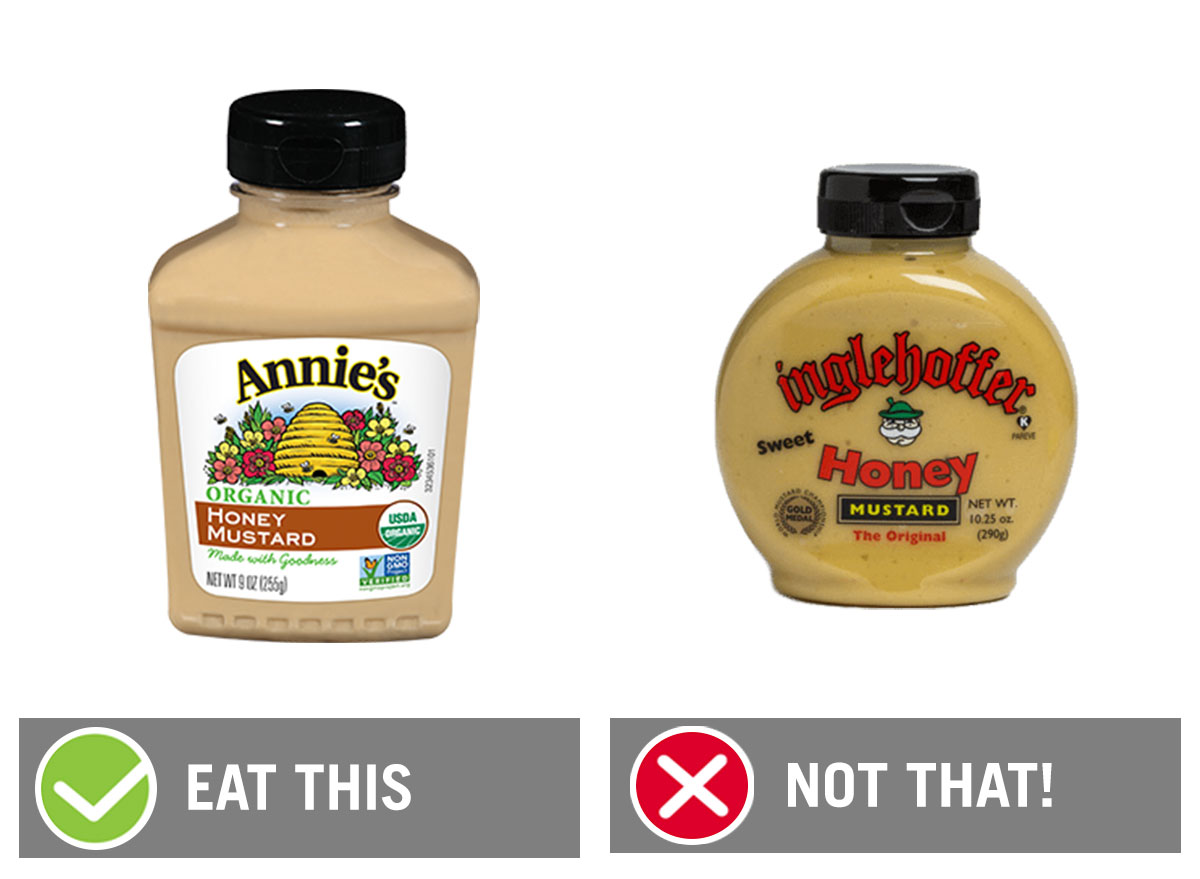 When sugar and water show up before mustard seeds on the ingredients list, should it really be labeled mustard? We don't think so. Opt for Annie's Organic Honey Mustard instead. It spikes its recipe with apple cider vinegar and uses real honey. 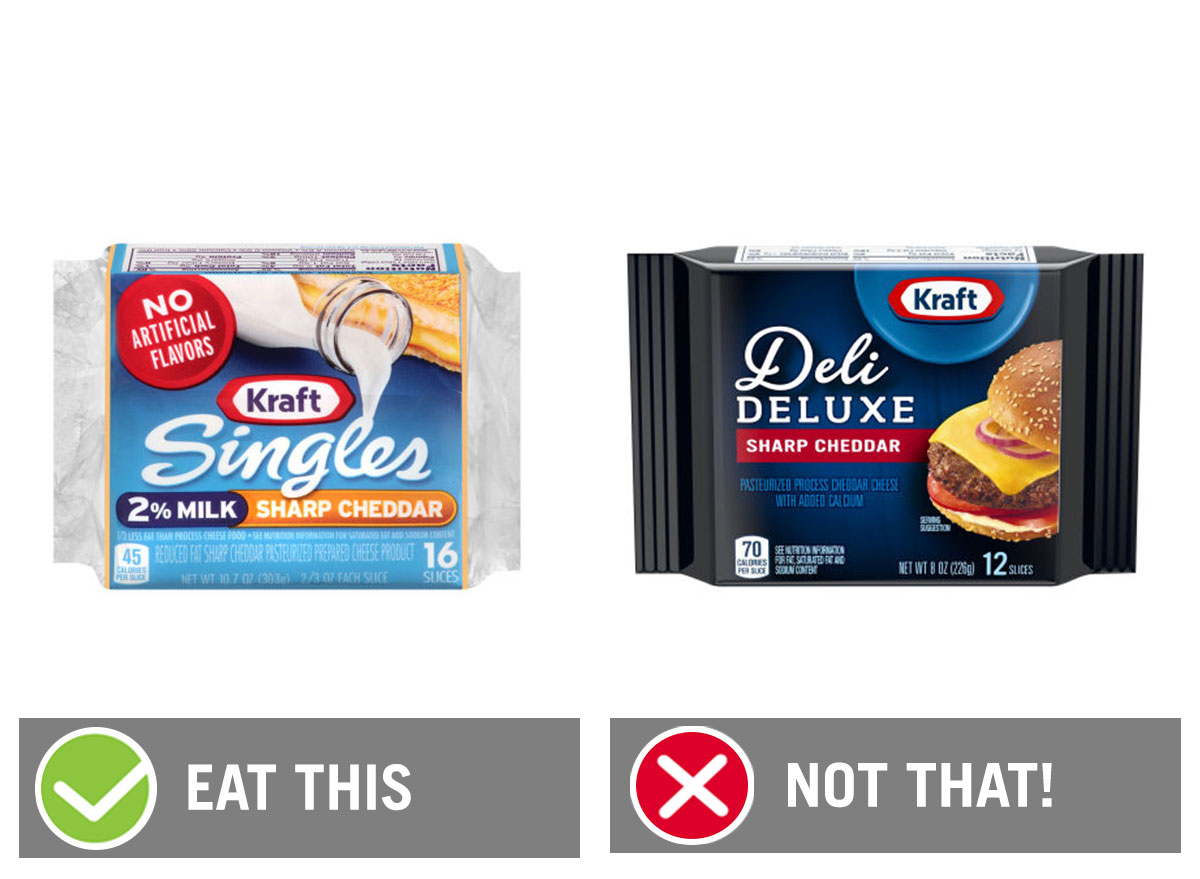 There may be a few lighter cheeses out there, but they don't taste like cheese. If you're looking for an all-purpose burger topper, use Kraft Singles 2%. Its shelf mate, Kraft Deli Deluxe, boasts three-quarters of its calories from fat, which earns you nothing but extra calories. Leave it on the shelf if you want to slim down. 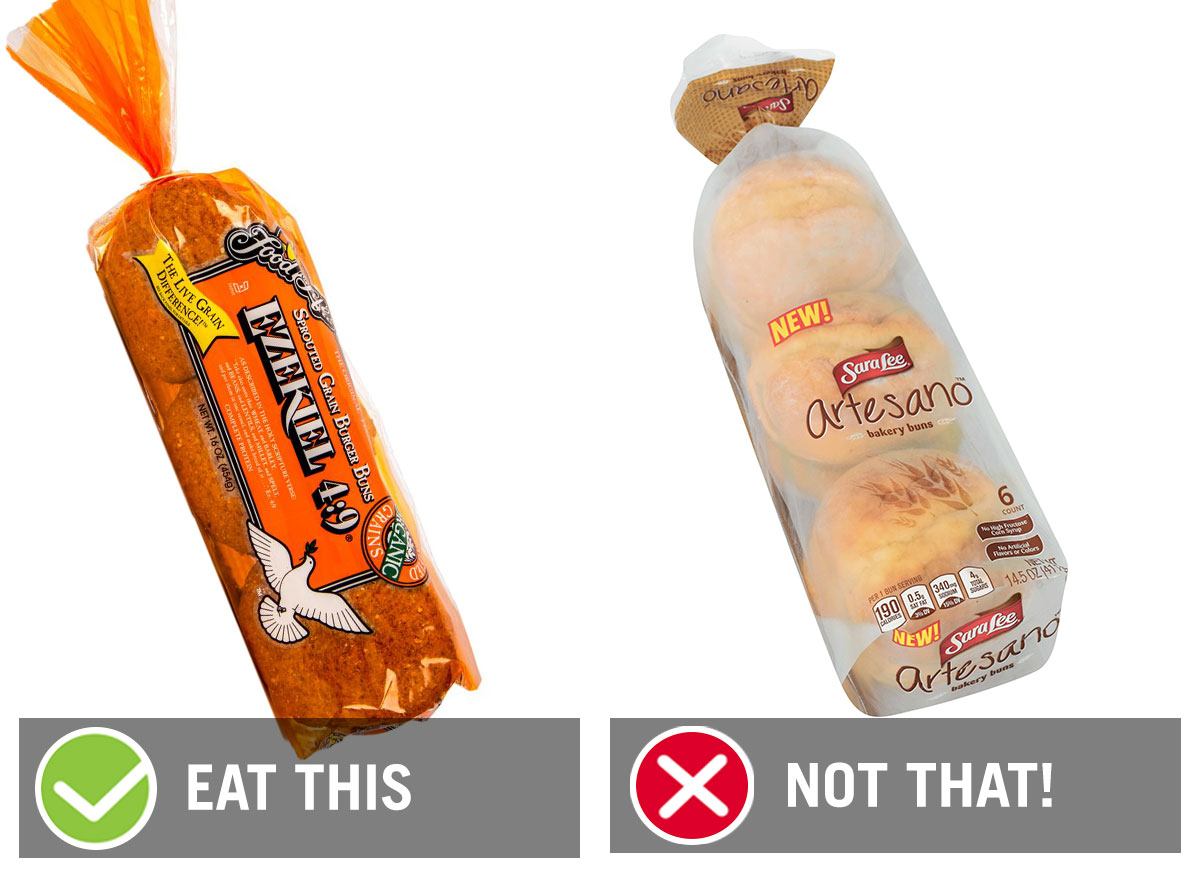 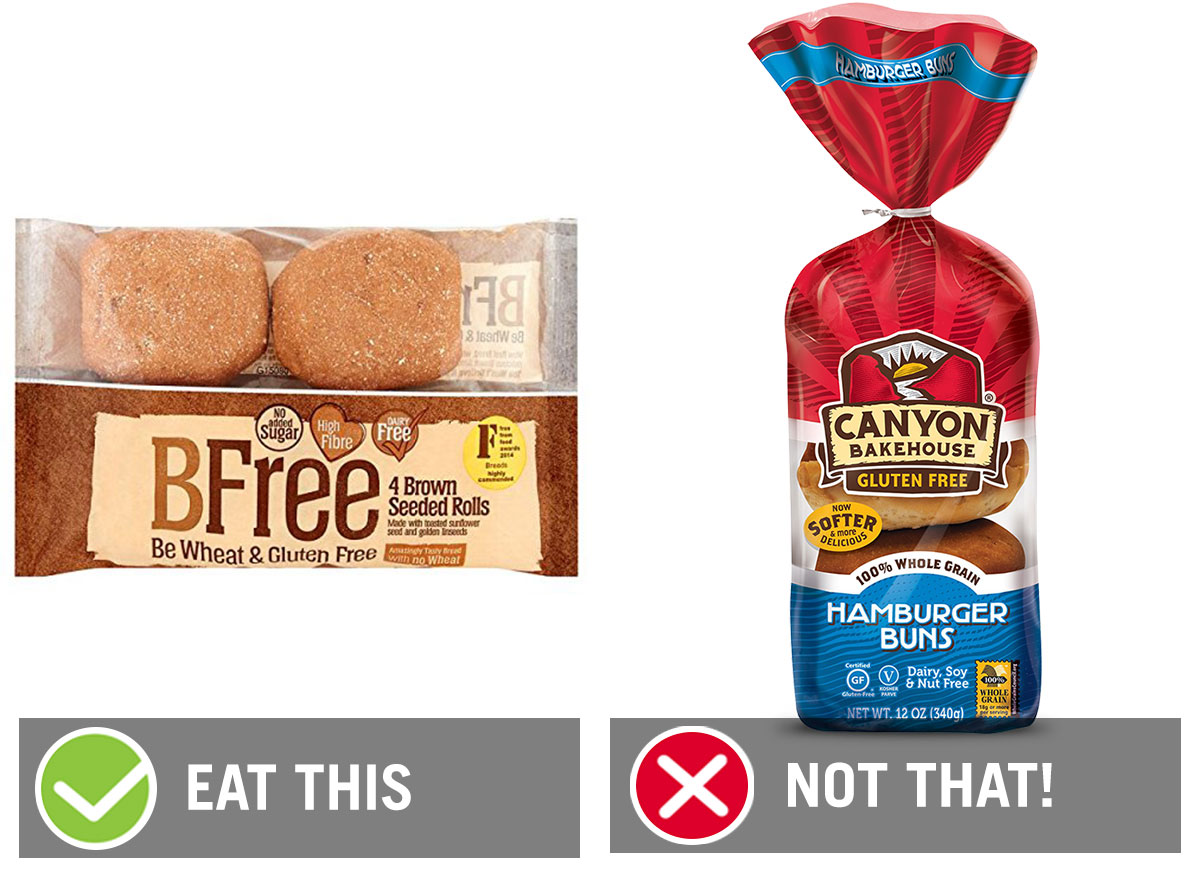 Both options are free of gluten, however, BFree Brown Seeded Rolls have zero sugar and twice the protein as Canyon's burger vessel, making them the clear winner in our eyes. If you're on a gluten-free diet for weight loss, you might want to read up on why a gluten-free is worse than no diet at all. 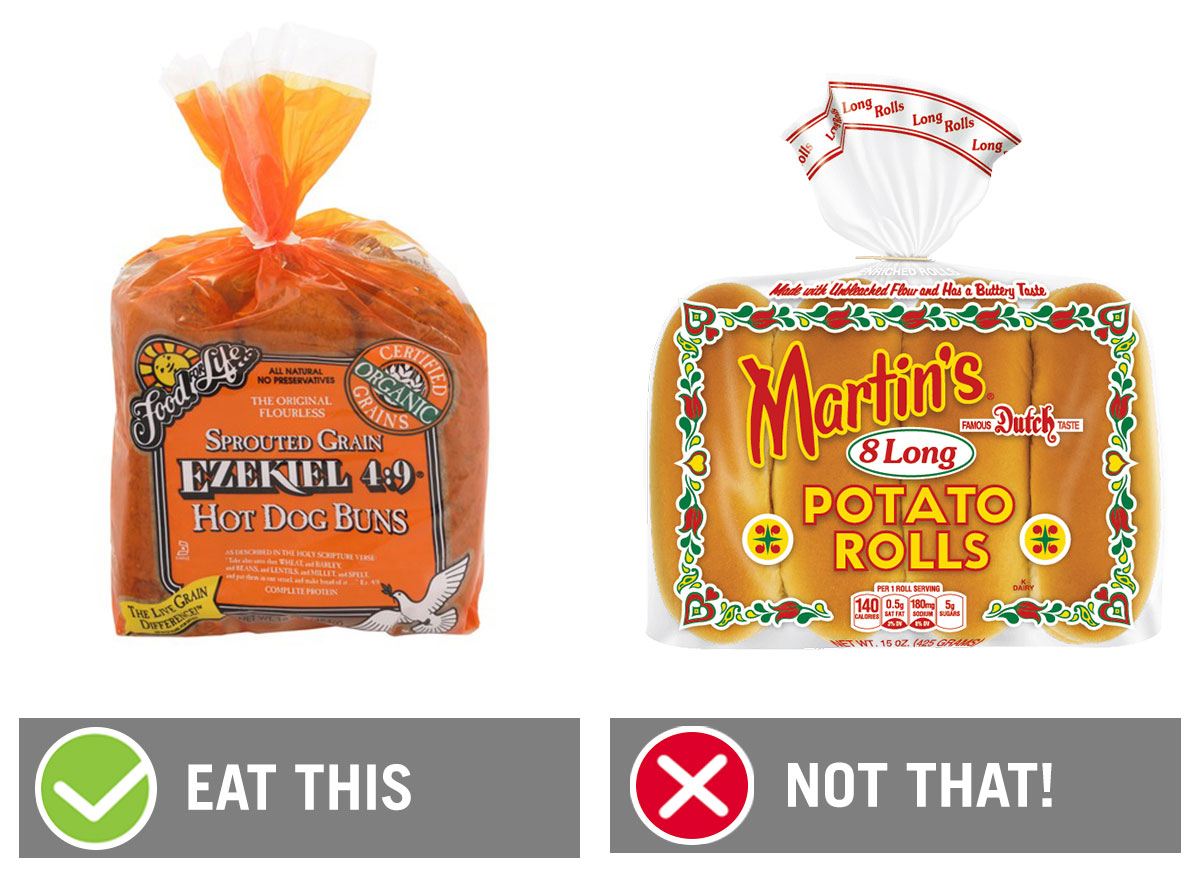 Ezekiel's hot dog holders carry six grams of filling fiber and an impressive nine grams of protein, a nutrient that preserves lean muscle mass and keeps your metabolism in high gear as you lose weight. Martin's is laden with dough conditioners and has more sodium. We'll pass on that combo. 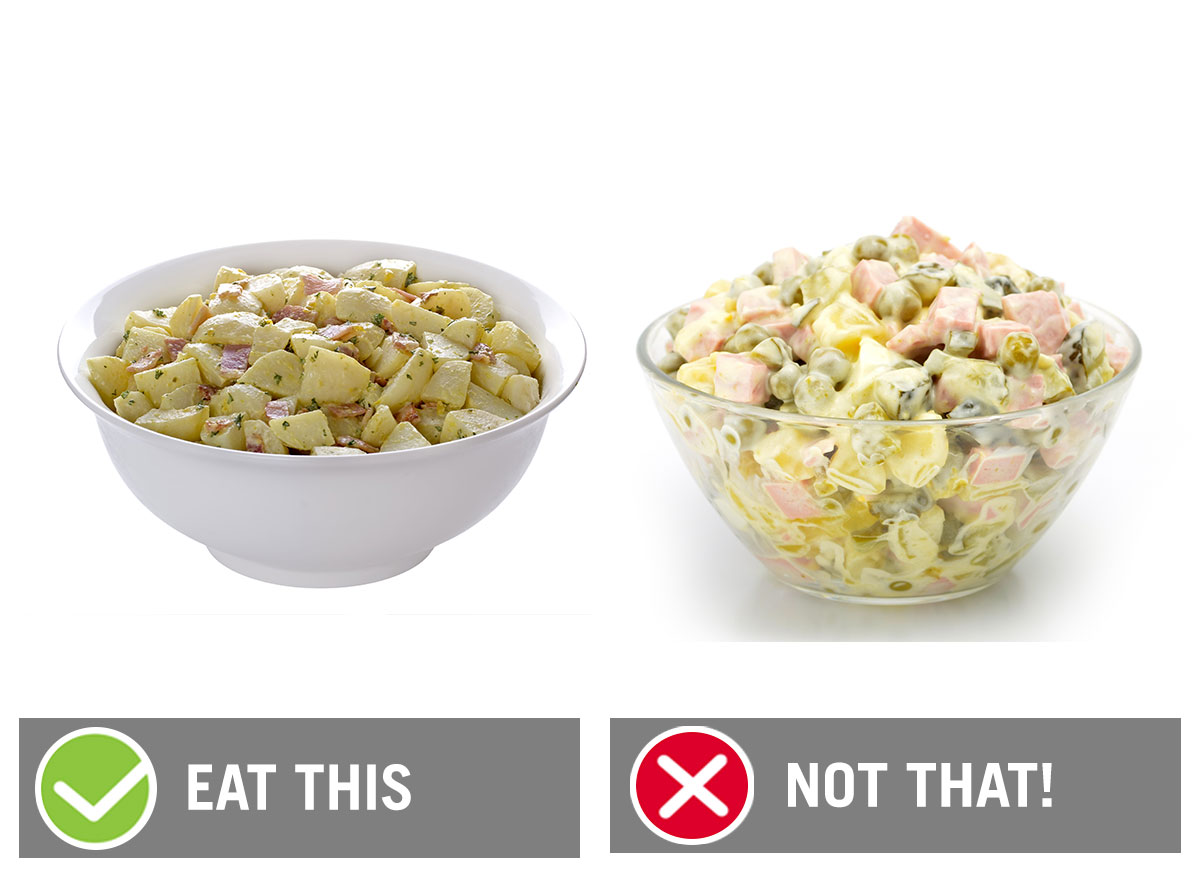 Enjoying a potato salad dressed in vinegar is a smart move. Eating the mayo-spiked kind? Not so much. Opting for the more acidic dish not only saves you calories, fat, and quite possibly a trip to the cardiologist, but also boosts your metabolism. Otherwise, a homemade cup could vary and land anywhere up to 350 calories with 20 grams of fat. Make it with olive oil and vinegar instead. According to a study published in Diabetes Care, vinegar increases the rate at which the body burns off carbs, making the more acidic dish a solid weight-loss weapon! On top of that, olive oil leads to higher levels of adiponectin in the body, a hormone that breaks down fats in the body. 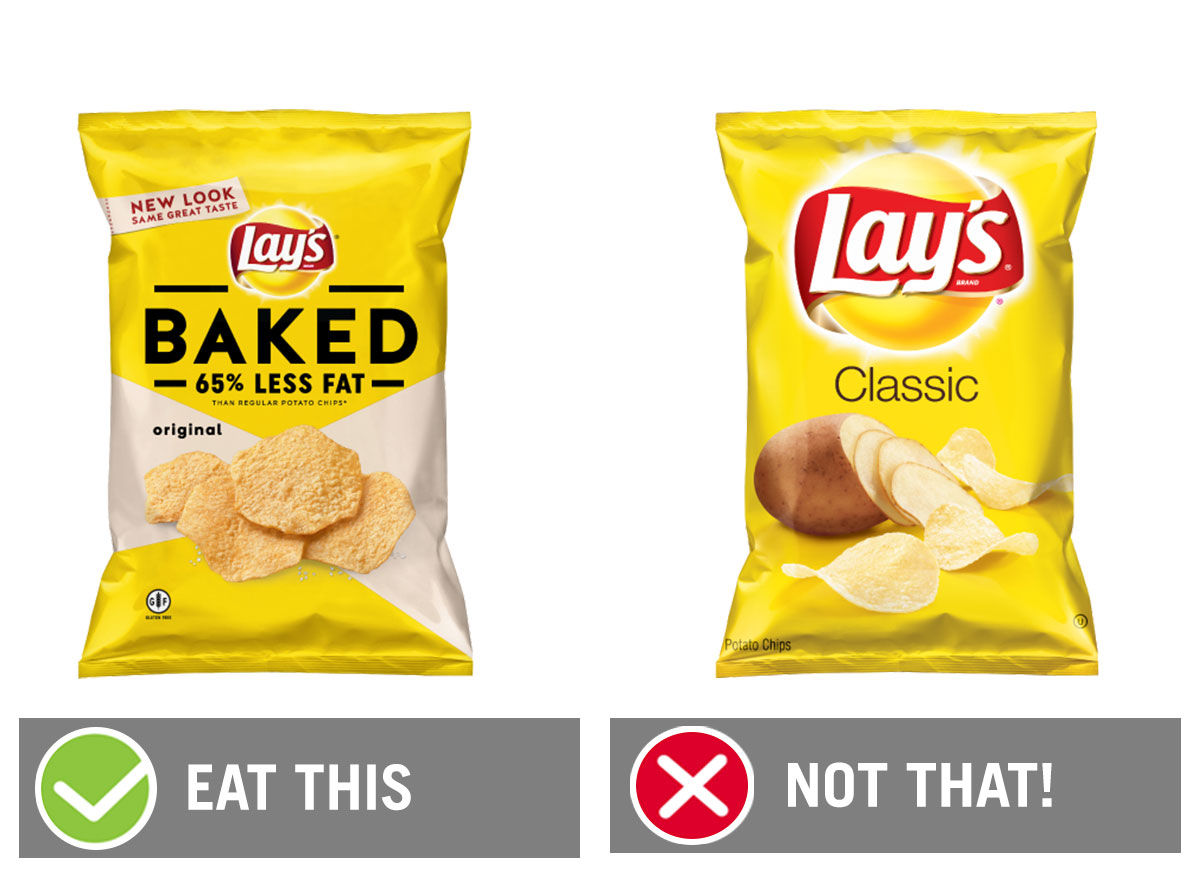 Lay's Oven Baked Potato Crisps may add some unnecessary sugar to their recipe, but other than that, they're low in calories and sodium and have a simple list of ingredients. Another plus: They're baked, not fried, so they have 65% less fat than a classic potato chip. Lay's classic recipe, on the other hand, are so salty and oily, you'll find a coating on both your fingers and tongue after just one. They have almost three times the fat as their skinnier counterpart, too. 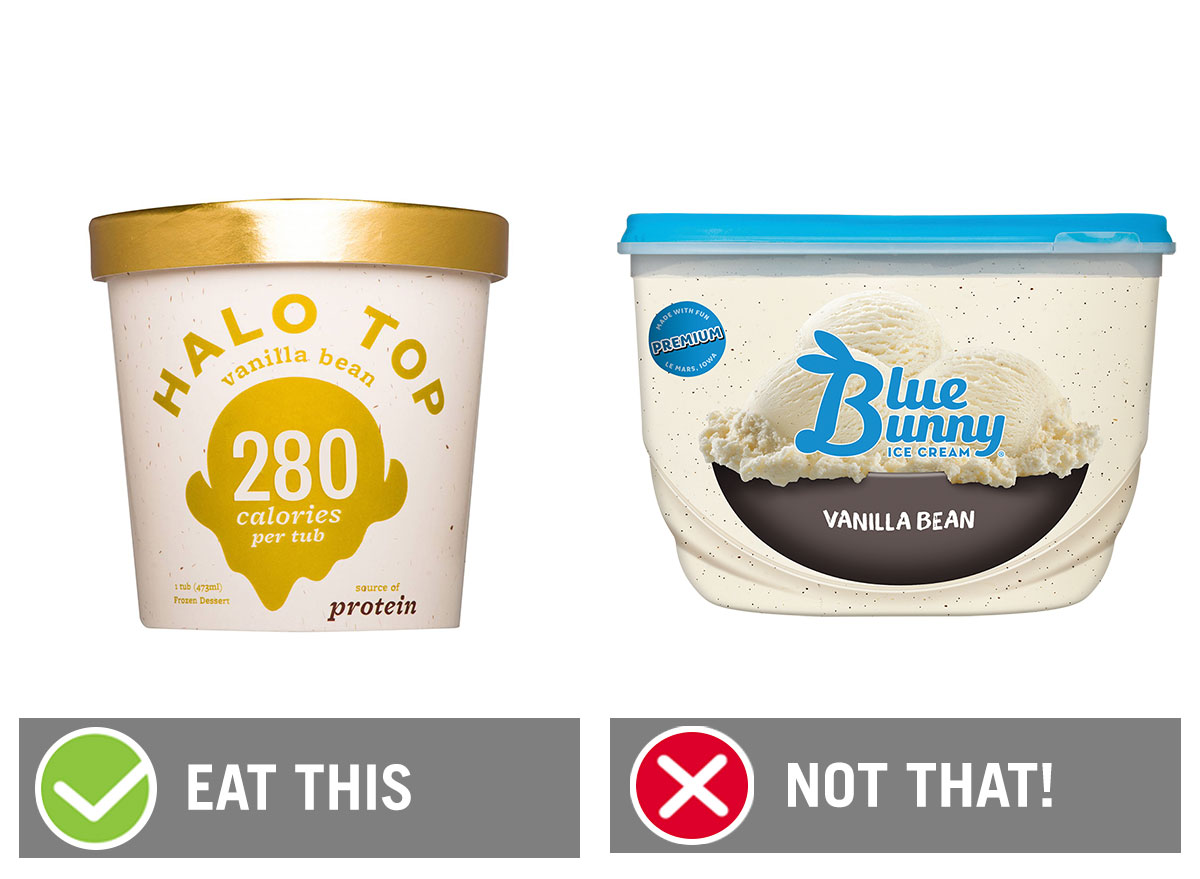 Halo Top gets a high-five for adding protein and prebiotic fiber into its ice creams and keeping real sugar to a minimum (they use natural stevia and a hint of real sugar to add sweetness). So one might expect all that effort would compromise taste—it doesn't. And we know because we've taste tested the stuff. And when the skinny version tastes that good, it just doesn't seem worth all the extra calories and sugar in buy the high-cal Blue Bunny variety. 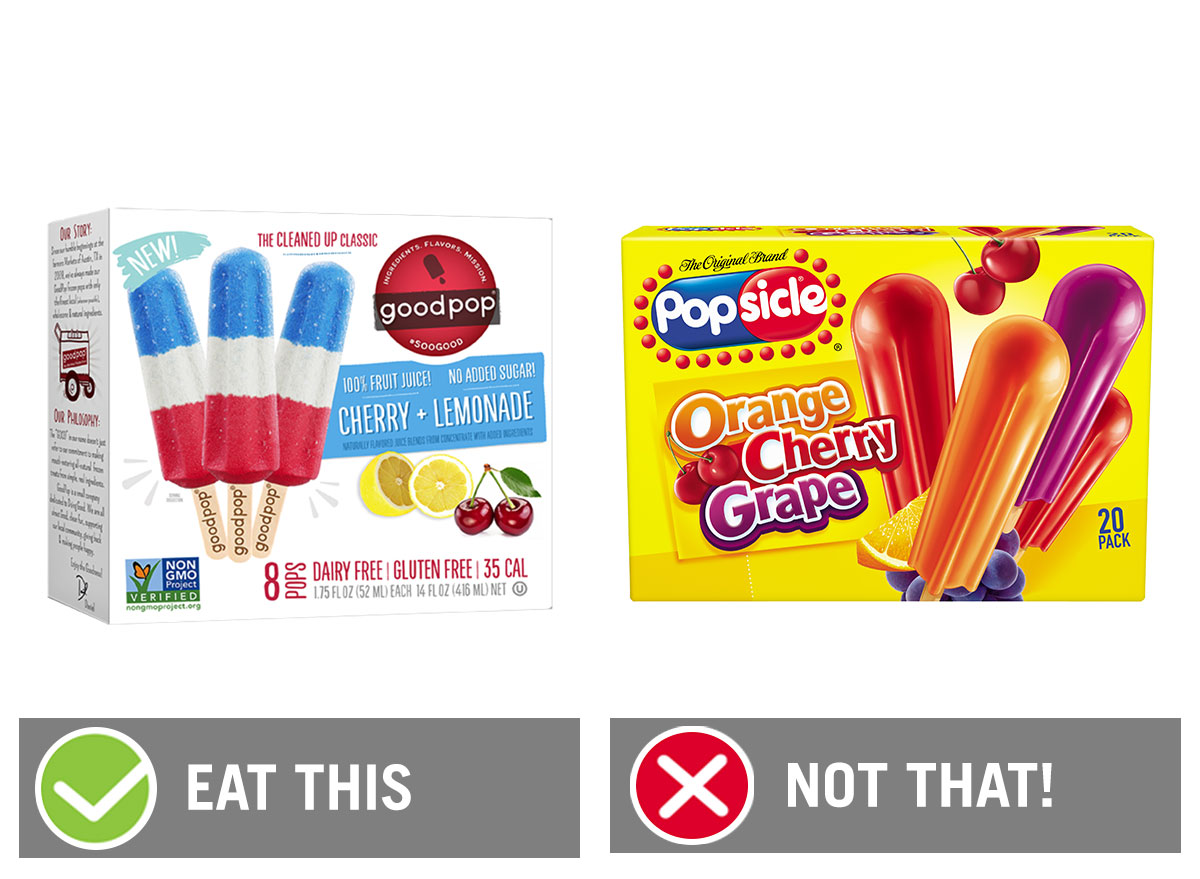 At just 35 calories, go ahead and indulge in Goodpop's ice pops guilt-free. They're made from juices from grapes, lemon, apples, and cherries and colored with spirulina. The Popsicle brand option is primarily made of high fructose corn syrup and artificial dyes. In other words, it's better off left in the cooler than melted in your belly. 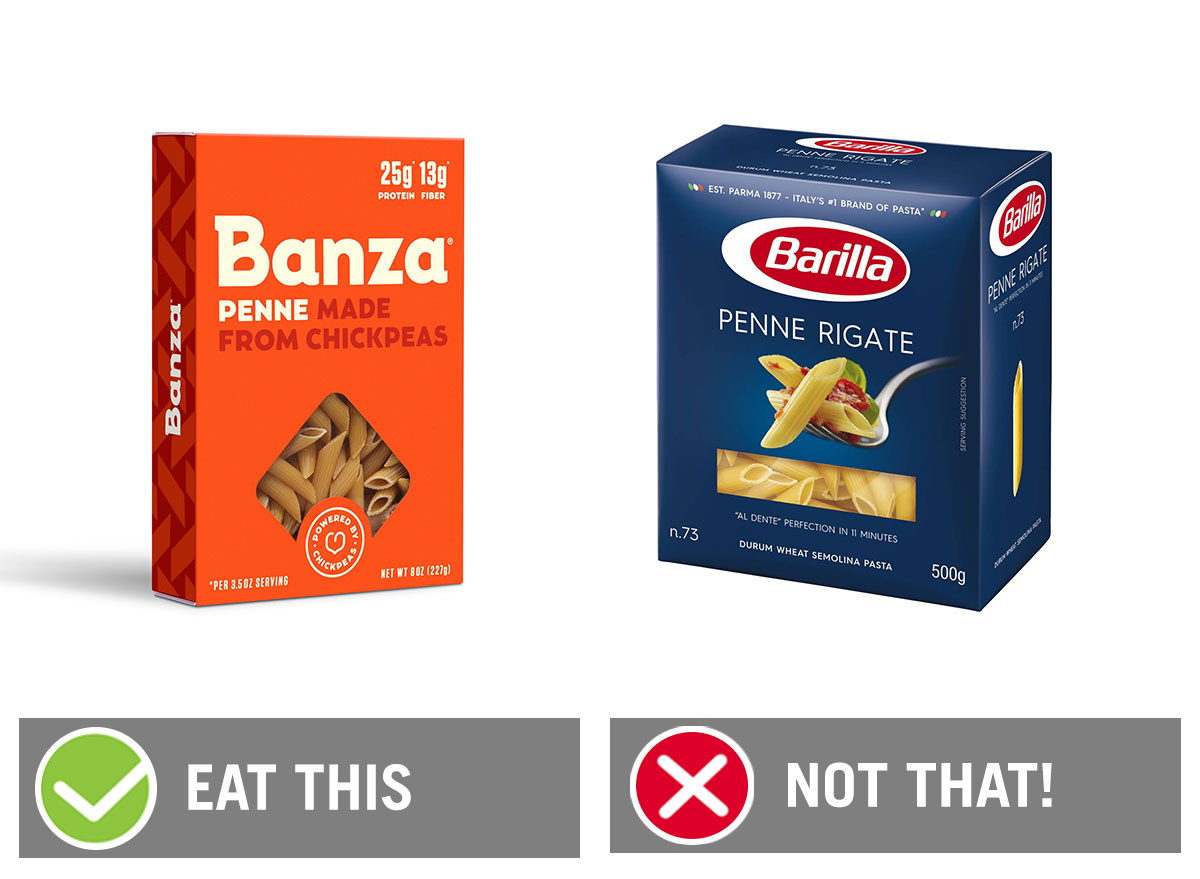 If you're making a hearty pasta salad for your next cookout, consider using iron- and protein-packed Banza Chickpea Penne instead of regular noodles. Barilla Penne Rigate and other similar, conventional pastas are void of any noteworthy nutrients, which is why we suggest skipping them. 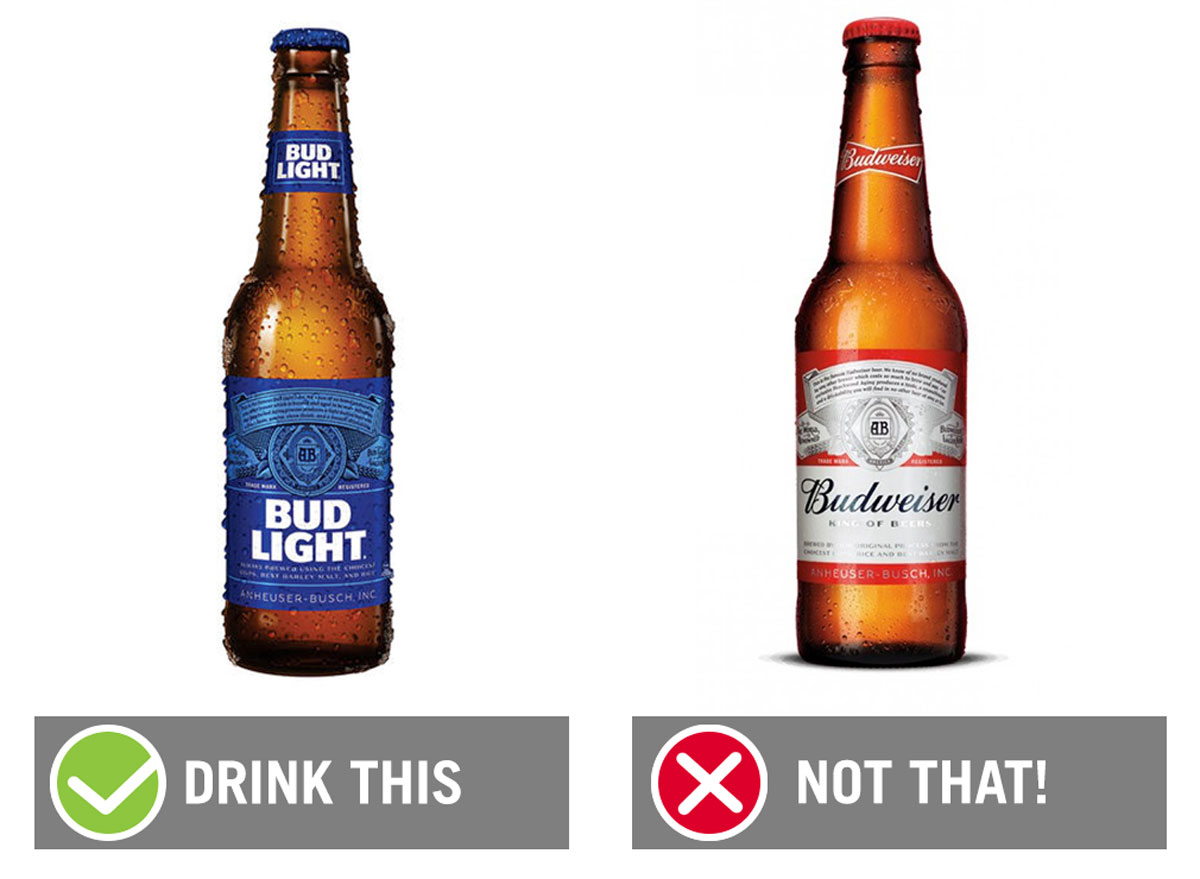 You may be as patriotic as the next guy, but if you're trying to fight fat, pass on the classic for one of Bud's lighter option to save 35 calories.

April Benshosan
April is a born-and-raised Brooklynite who has a passion for all things health, wellness, and tastebud-related. Read more about April
Filed Under
Cooking Meat // Cooking Tips // Food Swaps // Foods To Avoid // Healthy Foods