15 Foods That Should Never Be On Your COVID Shopping List

Stay in good health by avoiding these unhealthy foods.

As the COVID-19 vaccine becomes more widely available across the U.S., there's reason to believe we'll soon be able to hug family and friends, sit at a bar and maybe even plan a long-overdue vacation.

But with COVID cases and deaths still on the rise, it's more important than ever to practice social distancing, wear a mask and wash your hands. Another important prevention measure? Your diet.

"Although there are many factors that contribute to maintaining a strong immune system and staying healthy, what we eat plays a huge role," says Sylvia Klinger, DBA, MS, RDN, LDN, CPT, a registered dietitian and Hispanic Food Communications and Scientific Advisory Board member at the Grain Foods Foundation. "In fact, certain foods can actually make you feel worse when you're sick—including if you contract COVID."

Before you make your next trip to the supermarket, read on to see which foods should be crossed off of your COVID shopping list and what you might consider buying instead. And for more, check out these 15 Classic American Desserts That Deserve a Comeback.

Red meat can be part of a balanced diet; you just have to carefully choose the red meat you buy. "This food primarily impacts the immune system negatively when it's sourced from grain-fed beef over grass-fed, which is higher in immune-supporting nutrients like vitamin E and contains less saturated fat," says Lisa Richards, nutritionist and author of The Candida Diet.

It's important to indulge once in a while, but it's also important to avoid the grocery store bakery. That's because the ingredients commonly found in processed convenience foods are highly inflammatory, creating a heightened and unnecessary immune response by the body, explains Richards. "If this state is allowed to progress, a chronic state of inflammation can negatively impact the immune system along with gut health," she says.

Aside from the fact that soda—including diet soda—doesn't do any good for your waistline, it also wreaks havoc on your immune system. The same goes for many sugary fruit juices.

Ever catch a cold after a night of drinking? That's probably not a coincidence. Alcohol can suppress the immune system, and it doesn't provide many nutrients, either.

That said, some varieties can be better for your health than others. "It's best to opt for alcoholic beverages that are low calorie and sugar over traditional mixed drinks or high-sugar wines," says Richards. If you're going to drink, opt for a clear liquor mixed with a calorie-free soda or soda water (think vodka sodas or gimlets). This will reduce calories, impurities, and sugar intake.

We love Double-Stuf Oreos as much as the next person, and we're not saying you should never buy them. But be mindful of the quantity you're consuming because packaged, processed foods are highly inflammatory.

Need we say more? There are plenty of healthy alternatives to candy. Klinger likes bananas dipped in dark chocolate, then frozen; a baked apple or pear with some cinnamon and brown sugar; and her personal favorite, "tougher bark," which she says is like eating candy. To make it, simply combine one six-ounce container of Yoplait Original Lemon Burst yogurt, 1/4 cup of frozen blueberries (or any fruit), and one tablespoon of granola or crunchy cereal. Spread on parchment or wax paper and freeze for at least three hours or overnight.

Of all the foods that can make you prone to sickness, ice cream is one of the worst. That's because it contains two ingredients known to harm the immune system: dairy and refined sugar. "Refined sugar also promotes the growth of bad gut bacteria, which can alter the body's immune system as well," says Richards.

If ice cream doesn't support the immune system because it largely consists of dairy, the same goes for pasteurized cheese.

Energy drinks are overrated, says Klinger. "They can lead to energy spikes and crashes, both when you're sick and when you're not." If you're feeling sluggish or looking for an extra boost before your workout, try electrolyte water instead. 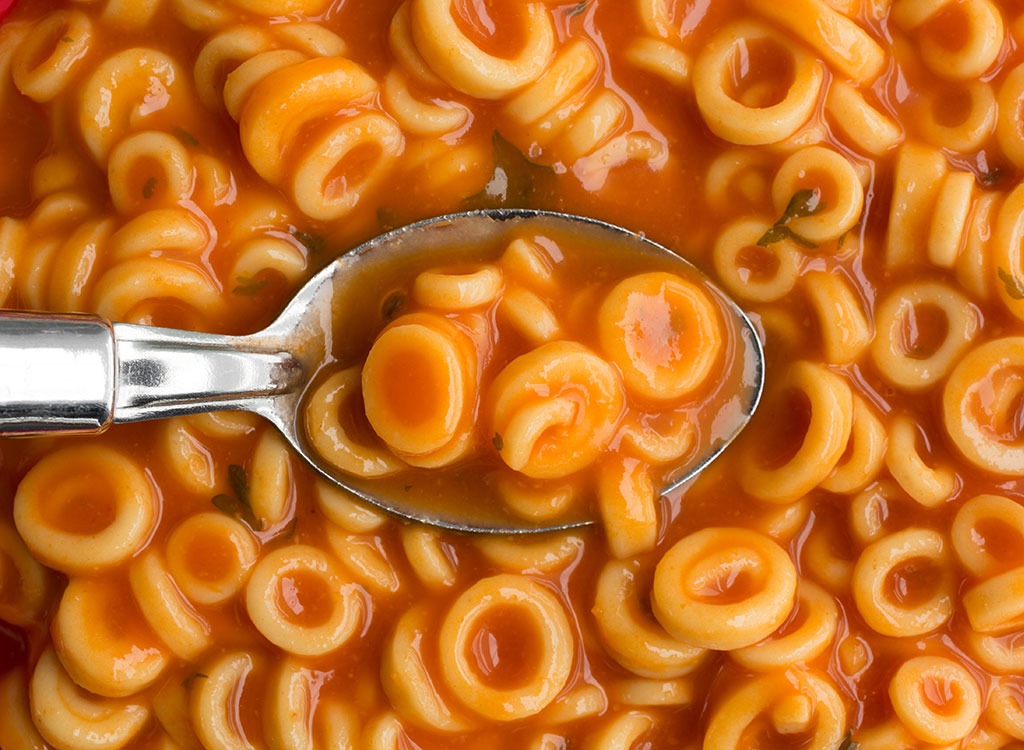 Leave the mac and cheese and SpaghettiOs on the shelf. Not only are these foods high in sodium, but they also suppress the immune system.

Cereal bars have a sneaky way of "looking" healthy when in reality, they're loaded with sugar. Try limited-ingredient snack bars by KIND and RXBAR instead.

Refined and processed oils are generally bad news for your health, says Richards. Refined vegetable oils such as sunflower oil contain large amounts of pro-inflammatory omega-6 fatty acids. You should also steer clear of "fake" butter spreads and margarine, she adds, as they cause inflammation and prevent the body from utilizing omega-3 fatty acids.

And pretty much everything else in the snack aisle. Chips are fried in those aforementioned refined and processed oils and then loaded with salt.

Don't be fooled by the packaging on crackers, which often advertises words such as "healthy" or "natural." Crackers fall into the processed food category—they're better left on the shelf.

5 Best Foods to Eat for Immunity

Salmon is known to reduce inflammation, which is believed to be the main culprit behind many illnesses. It also provides omega-3 acids, along with a healthy dose of A, B, and D vitamins; potassium; and an antioxidant called astaxanthin. Another reason to eat more salmon, especially during a pandemic? It's linked to a lower risk of depression.

Nuts are rich in many nutrients, including fiber, protein, and essential fats. Richards recommends cashews in particular, as they're also a source of magnesium and zinc. "Zinc doesn't get much attention for its immune support, but it plays a vital role in healthy cell growth and healing," she says. Cashew milk is a good option, too. "When it comes to zinc, a serving of cashew milk and a serving of raw cashews are relatively close in content."

Most of us associate oranges and other citrus fruits with vitamin C. But bell peppers pack more punch when it comes to this essential nutrient. "Interestingly, per ounce, red bell peppers have higher amounts of vitamin C than any other fruit or vegetable," says Richards.

"While most Americans know a diverse diet full of colorful fruits and vegetables and lean proteins is essential to getting many immunity-boosting vitamins and minerals, many people might not realize the huge role that both whole and enriched grains play in our immunity," says Klinger. "Whole grains, for their part, have been shown to improve healthy gut microbiota and immune response by providing whole grain fiber that helps maintain a healthy gut." Try Pepperidge Farm German Dark Wheat or 100% Whole Wheat, she suggests.

"Enriched/fortified grain foods also play a huge part in a healthy diet," says Klinger. "Looking at immunity specifically, zinc and folate, which are added to enriched/fortified foods such as bread and cereals, help the immune system protect the body from bacteria and viruses and are extra-important during pregnancy and early childhood for human development."

Eat This, Not That! is constantly monitoring the latest food news as it relates to COVID-19 in order to keep you healthy, safe, and informed (and answer your most urgent questions). Here are the precautions you should be taking at the grocery store, the foods you should have on hand, the meal delivery services and restaurant chains offering takeout you need to know about, and ways you can help support those in need. We will continue to update these as new information develops. Click here for all of our COVID-19 coverage, and sign up for our newsletter to stay up-to-date.
Amanda Norcross
Amanda Norcross is a freelance journalist, with bylines in FamilyVacationist, Family Vacation Critic, Health, SmarterTravel, USA Today and more. Read more
Filed Under
Coronavirus // Groceries