Ezekiel Cereal Will Make You Ditch Your Sugary Standby

It's just as tasty and crunchy as your go-to bowl, yet it contains an impressive amount of filling fiber.

By now, you've probably heard of many folks hopping on the Ezekiel bandwagon. Ezekiel in its most popular form—flourless bread—has been making its way into many morning avocado toasts and other go-to breakfast staples. If you haven't already noticed the colorful boxes in the breakfast aisle, the knockout health brand has some impressive cereal, too. Here's everything you need to know about Ezekiel cereal.

Why should you replace your go-to bowl with Ezekiel cereal?

Breakfast cereals that fall into the healthier category usually get a bad rap for tasting like soggy cardboard when drenched in a bowl of milk, and if you're snacking on it dry, you could, debatably, crack a tooth on the insanely textured pieces. Meanwhile, other ubiquitous cereals tout themselves as healthy, yet are jam-packed with sugar. (Take Kashi Go Lean Crunch, for example. It may offer a solid 8 grams of fiber but with it comes 13 grams of sugar per serving.) Unlike the rest, Ezekiel's 4:9 Sprouted Whole Grain Cereal is actually something to look forward to in the morning. It comes in in tasty flavors like Cinnamon Raisin and Almond—sans the sugary downside.

Why are sprouted grains so special? 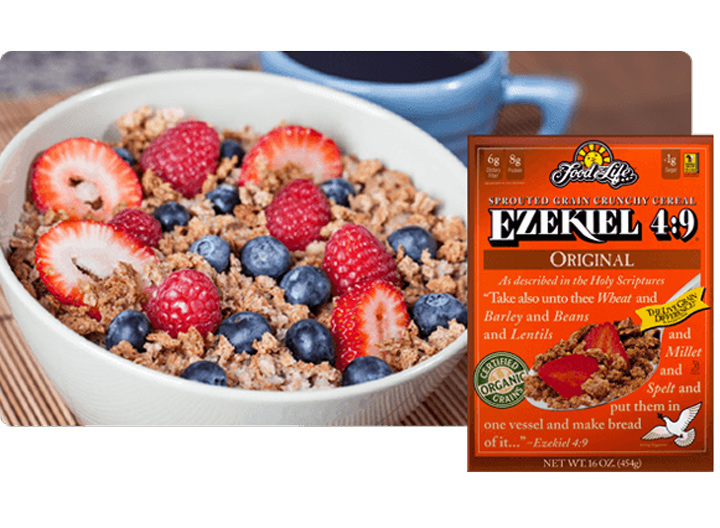 To take a deeper dive into Ezekiel cereals' nutritional labels, we asked Samantha Cassetty, MS, RD, a nationally-recognized nutrition and weight loss expert, to give us the lowdown in order to make smarter choices while food shopping. "One of the best habits you can adopt is to eat whole grains instead of refined ones, so swapping out your sandwich bread or morning cereal are ways you can ease into this habit," Cassetty tells us. "Among the whole grains, sprouted ones have some unique benefits. The sprouting process breaks down some of the starch in whole grains, which makes sprouted grain products a little easier [to digest]. Plus, the sprouting process breaks down phytates, which frees up nutrients like magnesium and B vitamins, and makes them easier to absorb. Ezekiel cereals get my thumbs up for another reason: They don't have any added sugar."

A half-cup serving of Ezekiel 4:9 Sprouted Whole Grain Cereal contains 190 calories, 1 gram of fat (0 grams of saturated fat), 200 milligrams of sodium, 40 grams of carbs (6 grams of fiber, 0 grams of sugar), and 8 grams of protein. You can also opt for a bowl of Ezekiel's cinnamon raisin cereal, which packs in just 8 grams of sugar coming from raisins and blood-sugar-stabilizing cinnamon. Ezekiel cereals pack in a number of sprouted whole grains and legumes like wheat and lentils. However, Cassetty warns that some may need to be wary of this. "The only thing to keep in mind is that they do contain sprouted lentils and soybeans. Though this adds some protein to the mix, soy (like wheat) is an allergen, and both can cause bloating and other GI issues in people who have certain food sensitivities."6254a4d1642c605c54bf1cab17d50f1e

If you're someone who is guilty of eating sugar-filled crisps on the regular, switching to Ezekiel could be a great way to break the bad habit. If you're still craving sweetness, we recommend sprinkling fresh blueberries or blackberries into your morning bowl. Yum!