20 Foods You Should Never Buy At Publix

Publix offers plenty of healthy foods, but these aren't the best options.

Publix has long been known for its wholesome, high-quality food choices and consistently ranks among the nation's most beloved supermarket chains. Plus, there's that deli counter with those made-to-order "pub subs" that no one can seem to get enough of.

So, does that mean you can't go wrong when you shop for food at Publix? Well, no, not exactly. While Publix is known to sell a variety of healthy choices, there are plenty of options that we'd recommend you stay away from. In fact, you could definitely bring home some genuinely questionable Publix-branded products if you wanted to.

Here are 20 of the worst foods at Publix. And for more foods to skip, steer clear of these 17 Worst Foods to Buy at Target. 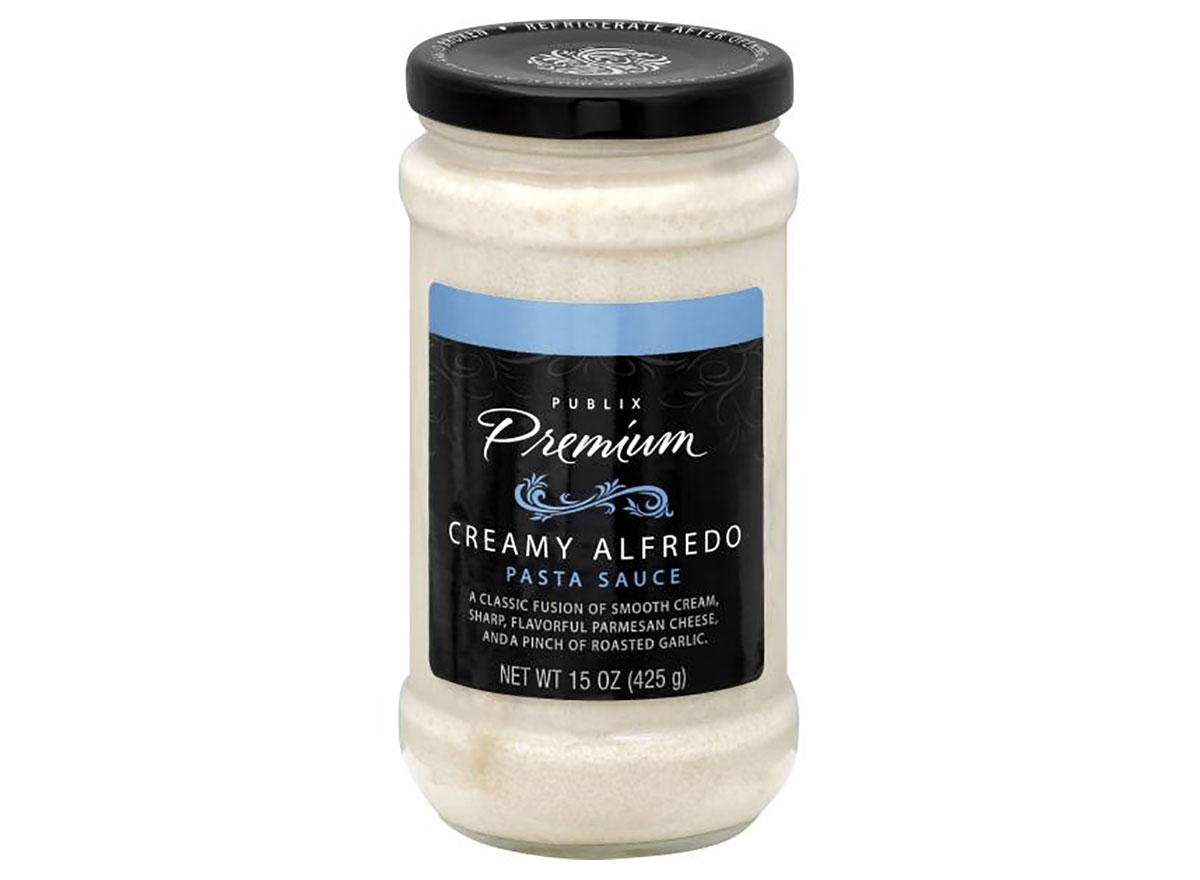 It's not that the Publix Premium Alfredo Sauce is markedly worse than other Alfredo sauces you can buy. But still, it's Alfredo, which is made with heavy cream and cheese, which is why it contains 3.5 grams of saturated fat per serving. Moreover, despite that cheese is the fourth ingredient, this sauce offers a mere two grams of protein per serving. For context, one 2-ounce serving of Banza rotini pasta packs 12 grams of protein and no saturated fat.

For a healthier option, try Primal Kitchen No Dairy Alfredo Sauce with Avocado Oil, which contains only 1 gram of saturated fat per 1/4 cup serving. 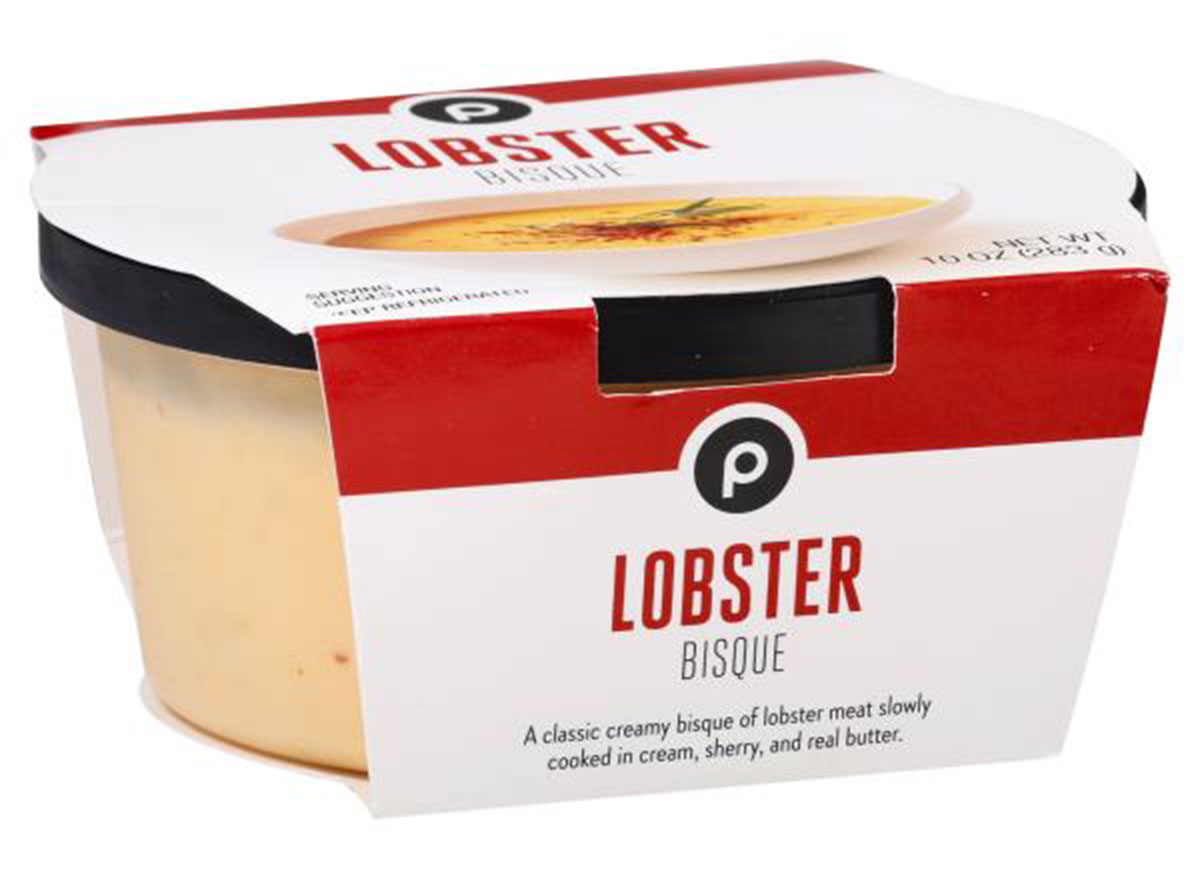 Lobster bisque is, by definition, a decadent creamy, savory-sweet soup concoction. But does a single serving have to pack nearly a whole day's worth of saturated fat and almost half of your daily allowance of sodium? Even the sugar content is a bit high for a soup that should be getting most of its sweetness from lobster meat.

While sushi can be a part of a healthy meal, that all goes away when your sushi is coated in fried Panko bread crumbs panko crumbs like the Publix Crunchy Roll is. Check out The Best and Worst Sushi Rolls for Weight Loss for additional tips on how to choose a healthy sushi roll. 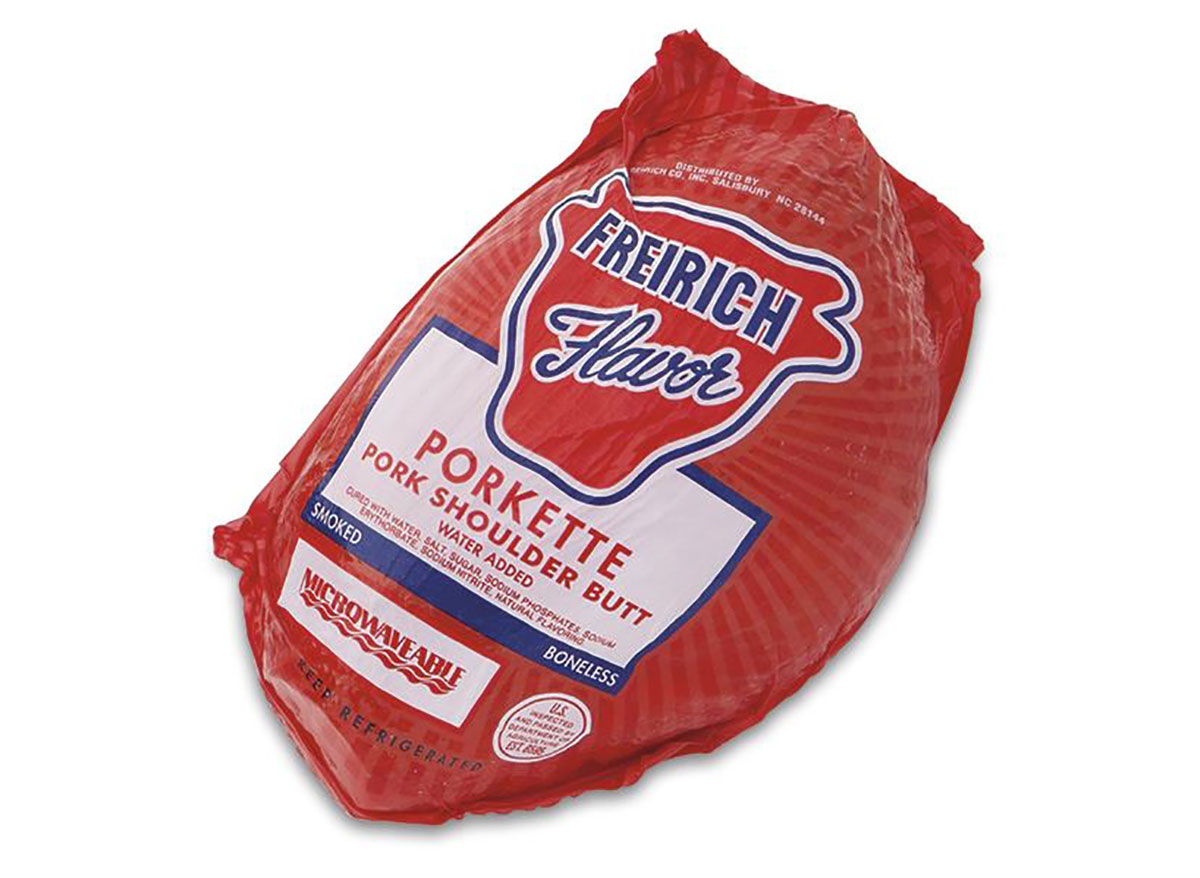 Back in 2006, The New York Times talked up this particular product as the secret to award-winning chef Lidia Bastianich's pork and cannellini beans and raved about its buttery richness. That might explain why crowd-pleasing Publix carries it. But that doesn't make it healthy. Quite the opposite, in fact, with its saturated fat and sodium contents. In addition, it contains the bad kind of nitrates that may cause cancer.

But there's also such a thing as healthy nitrates, found in various veggies. Don't miss One Major Effect of Eating Spinach, Says Science. 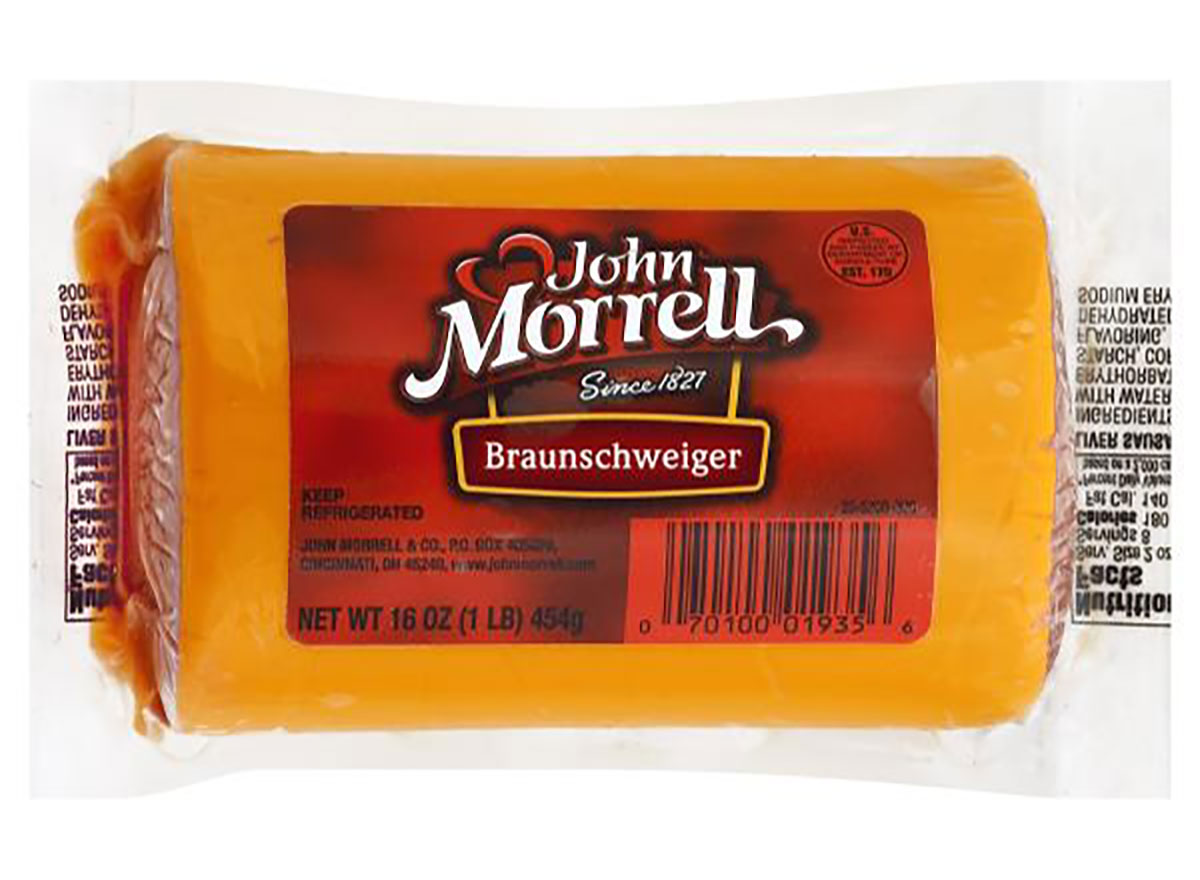 Also sold at Publix (although not made or labeled by Publix) is the John Morrell Braunschweiger, which is a soft, spreadable plastic-encased sausage made of minced pork (including pork fat and pork liver) and spices. If you've ever had liverwurst, then you're familiar with the general idea here—which is that this is not a good-for-you food.

Ditch this item and instead, opt for a plant-based option like Beyond Meat Beyond Sausage. Each link contains 190 calories, 5 grams of saturated fat, 3 grams of fiber, and 16 grams of protein. 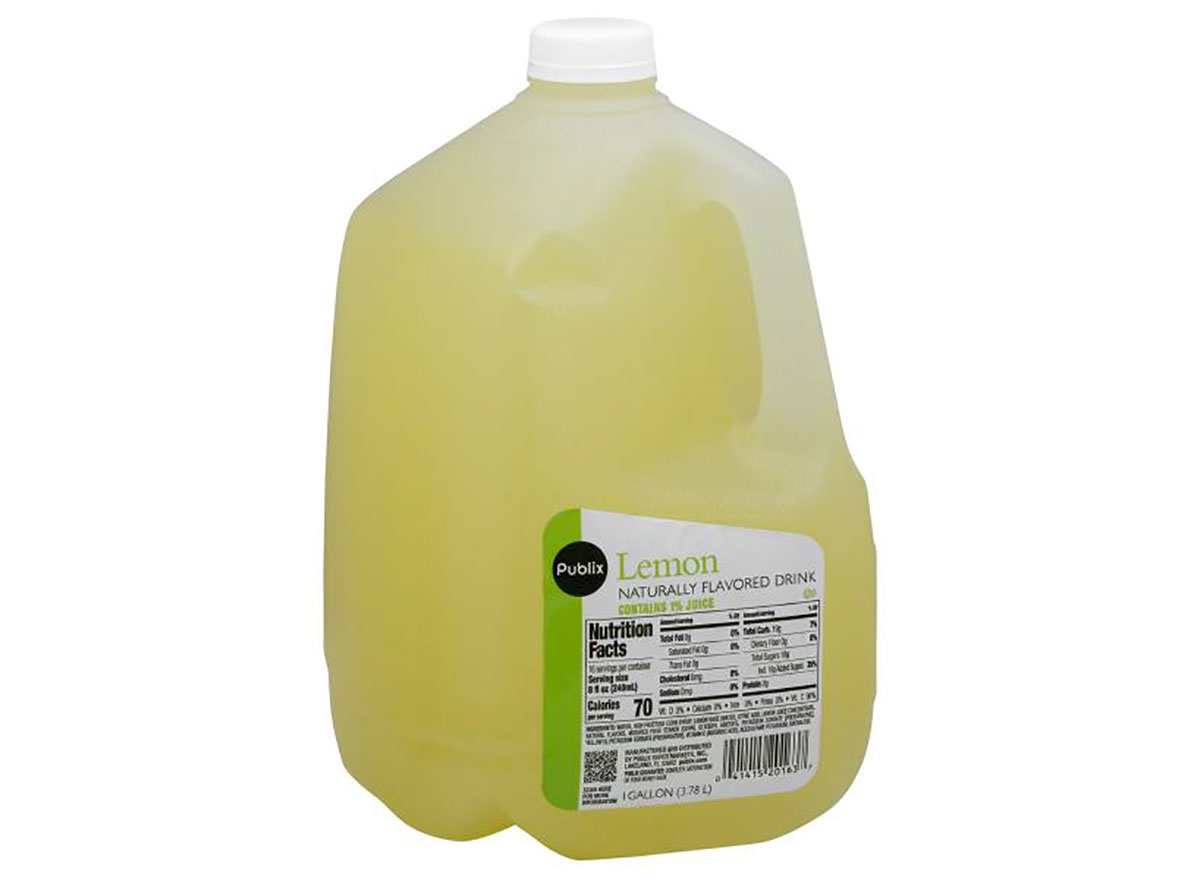 Delivering 27 grams of sugar, mostly in the form of high fructose corn syrup, and not made from lemon juice, but a multi-ingredient lemon concentrate, this Publix Lemon Flavored Drink doesn't even bother pretending to be "lemonade." Our advice? Skip the lemon-flavored drink and instead make your own lemon water at home. 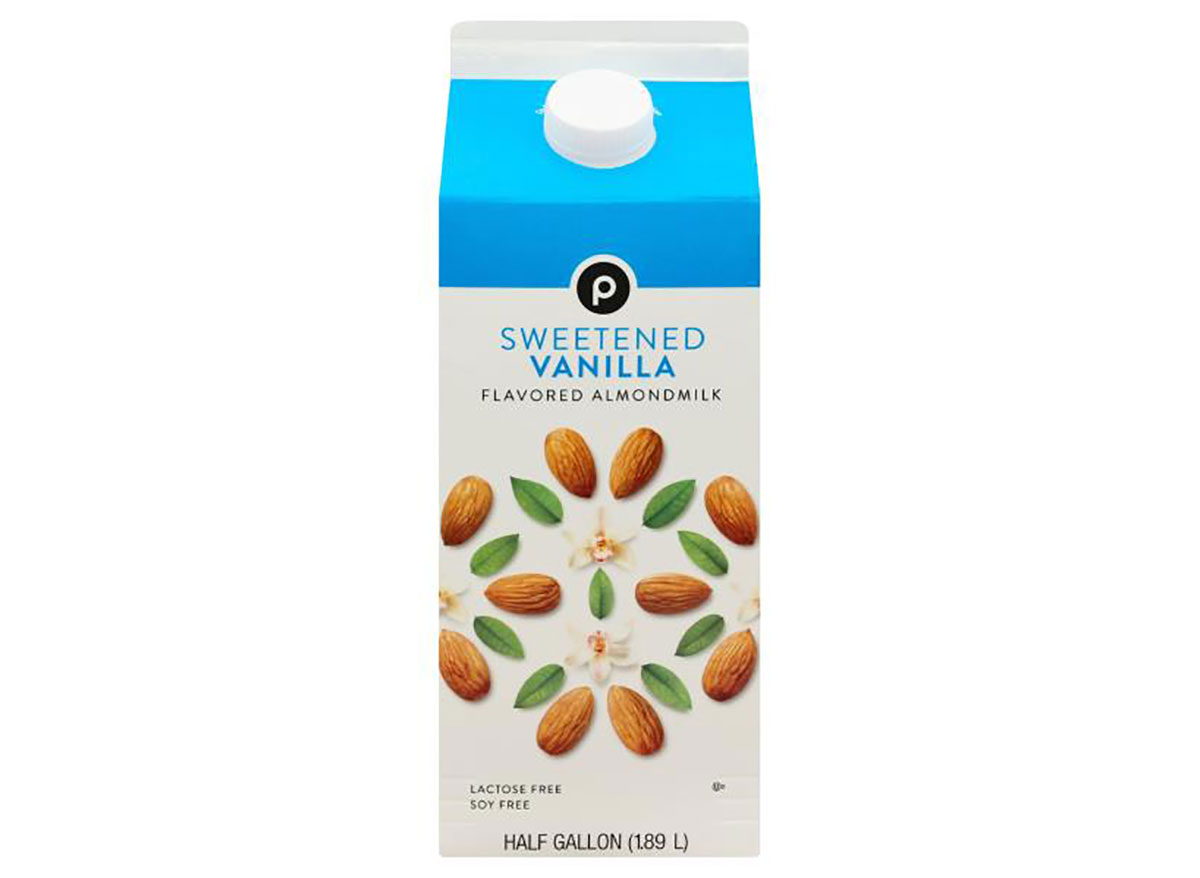 "Almond milk" is a bit of a misnomer, considering the fact that the beverage is mostly water. And unlike actual almonds (or actual milk), almond milk offers virtually no protein at all. What it does have is a lot of liquid cane sugar (an added sugar).

For context, the American Heart Association (AHA) recommends that women consume no more than 25 grams of added sugars (or 6 teaspoons) daily and that men cap their consumption at 36 grams (or 9 teaspoons) a day. With just one serving of this milk, you already wipe out a considerable amount of your daily allowance. 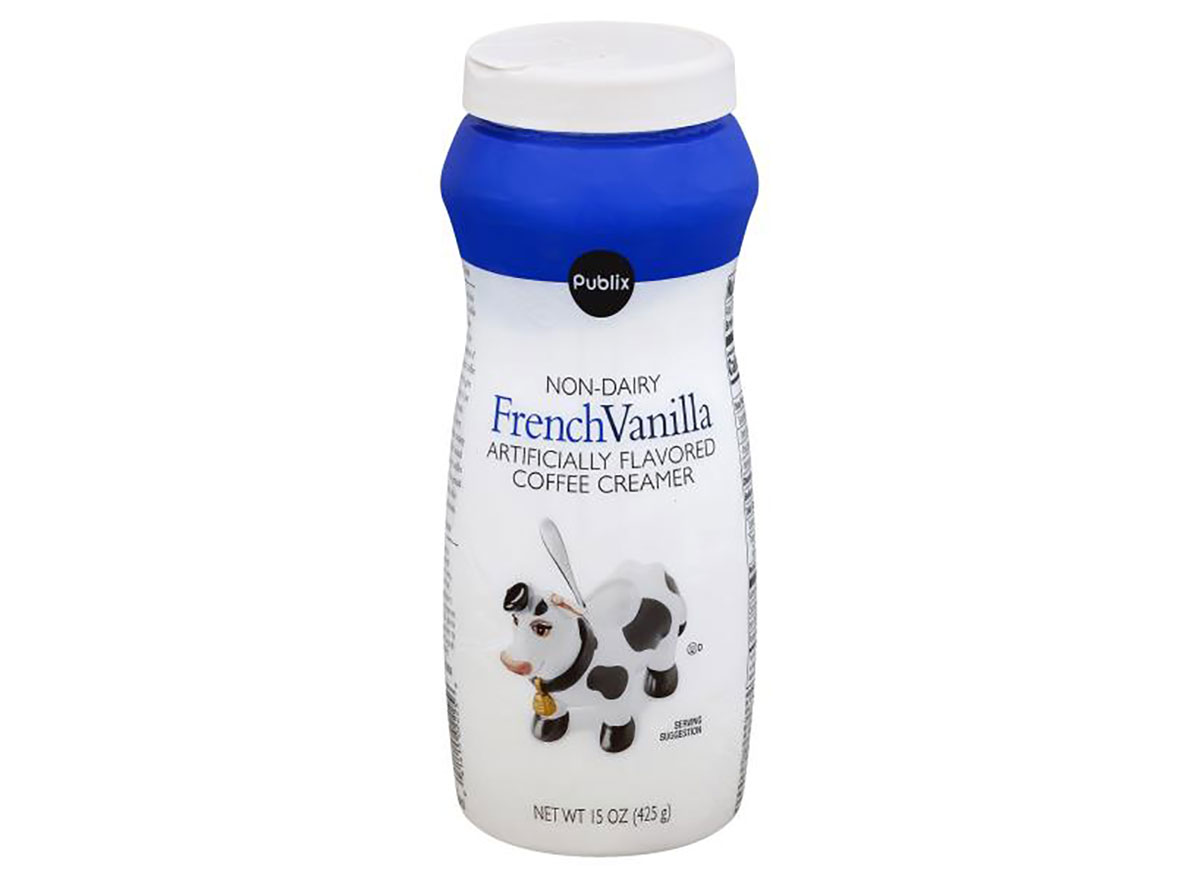 Would you like some vegetable oil with your coffee? If not, you should consider skipping the Publix Non-Dairy French Vanilla Coffee Creamer. 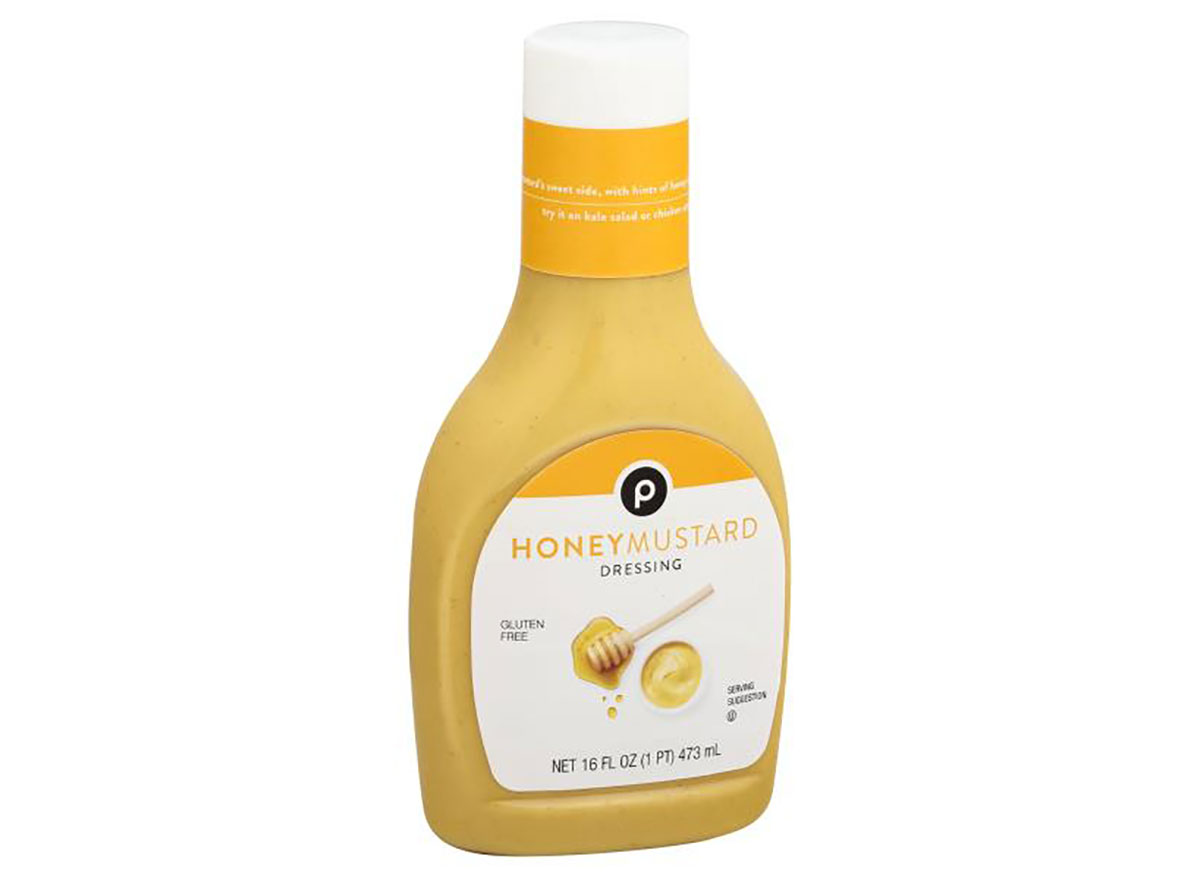 Publix Honey Mustard Dressing didn't make our roundup of the 20 unhealthiest salad dressings, but with ingredients like soybean oil base five grams of sugar per serving, it can certainly keep pace with those that did. 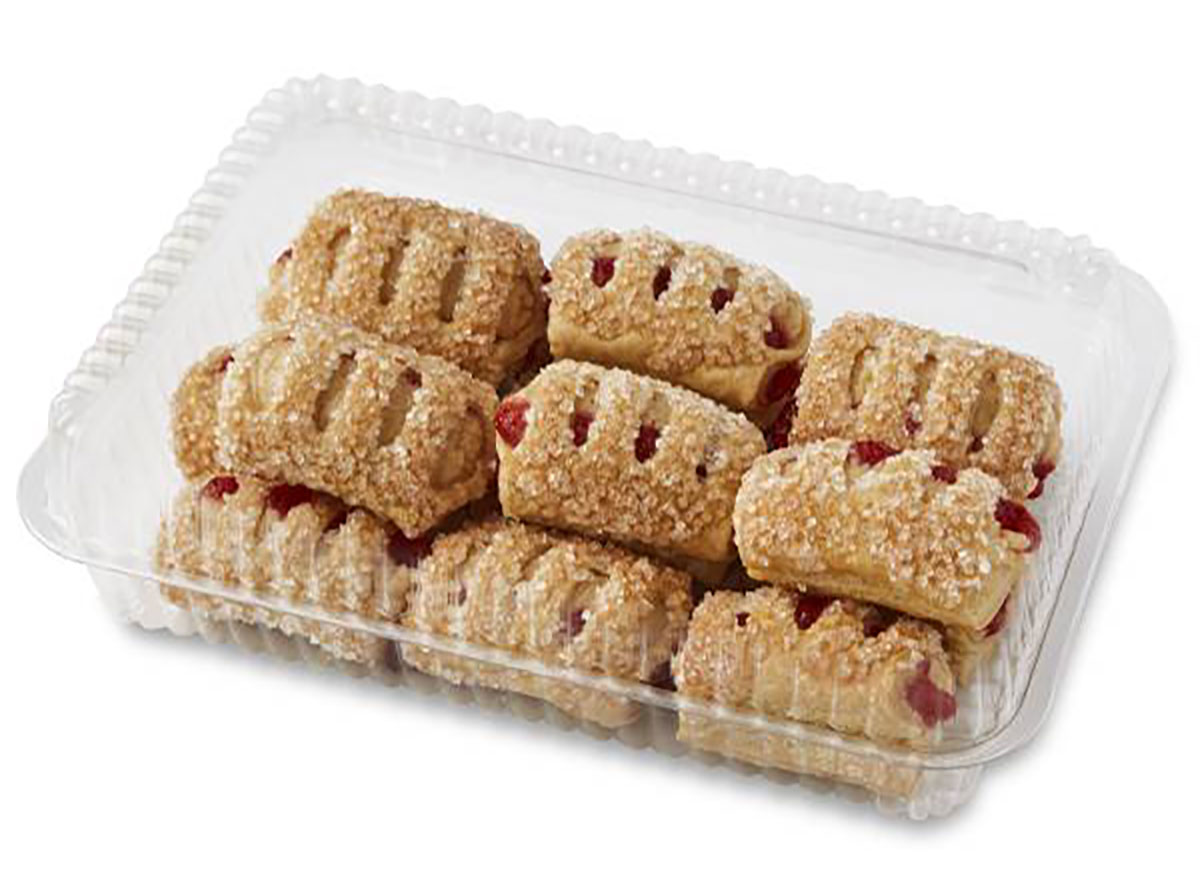 You know going in this wasn't going to be a healthy option, but who knew just how unhealthy a tiny little pastry could be? While the Publix Strawberry and Cheese Pastry Bites sound delicious, they're pretty void of strawberries and instead, packed with saturated fat and added sugars. It turns out the strawberry filling is primarily made of high fructose corn syrup and apple sauce. 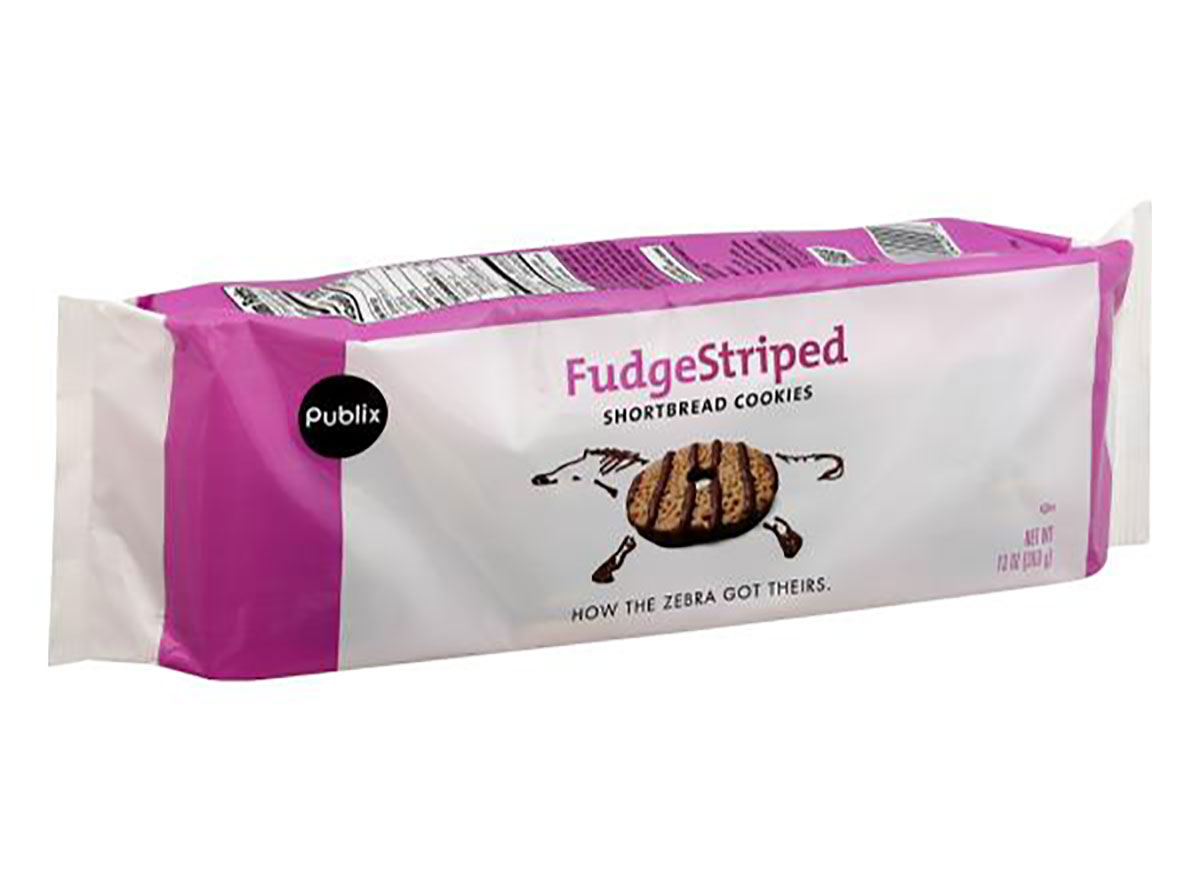 "Shortbread" is by definition a very buttery business, so we'd expect the saturated fat in a shortbread cookie to reflect butter's high saturated fat content. Publix Fudge-Striped Shortbread Cookies have less saturated fat than one would expect, but, that's only because there's actually no butter to be found in these cookies. Instead, you'll find palm oil, which isn't that great of an alternative.

If you want a classic shortbread cookie, you can easily make one yourself. In fact, our keto shortbread recipe manages to get it right without any sugar at all. 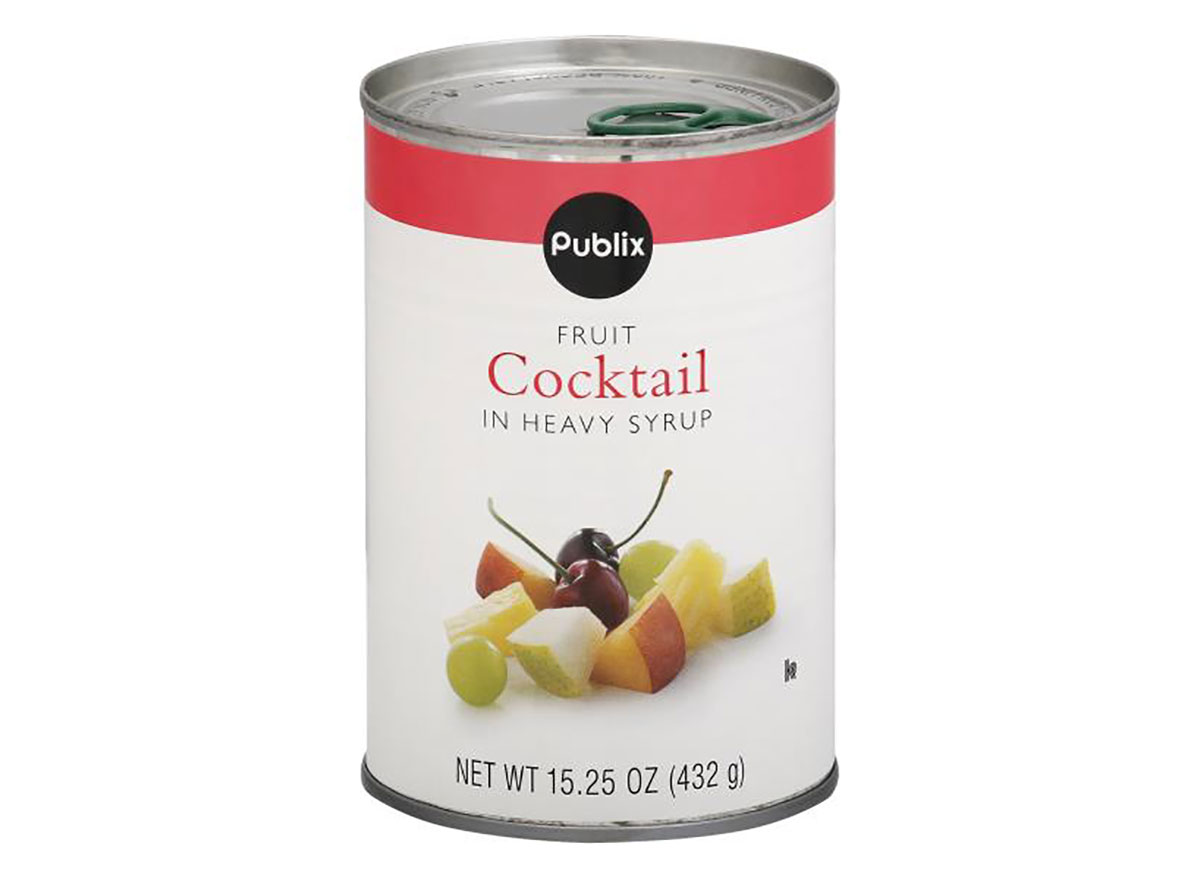 The real problem with Publix Fruit Cocktail in Heavy Syrup is that it seems to be having an identity crisis, which is to say it doesn't know whether it's a fruit or a dessert. And who can blame it, considering each serving has a mere one gram of fiber but a whopping 18 grams of sugar? Is it any wonder the fruit cocktail earned a spot on our list of unhealthy "healthy" foods?6254a4d1642c605c54bf1cab17d50f1e 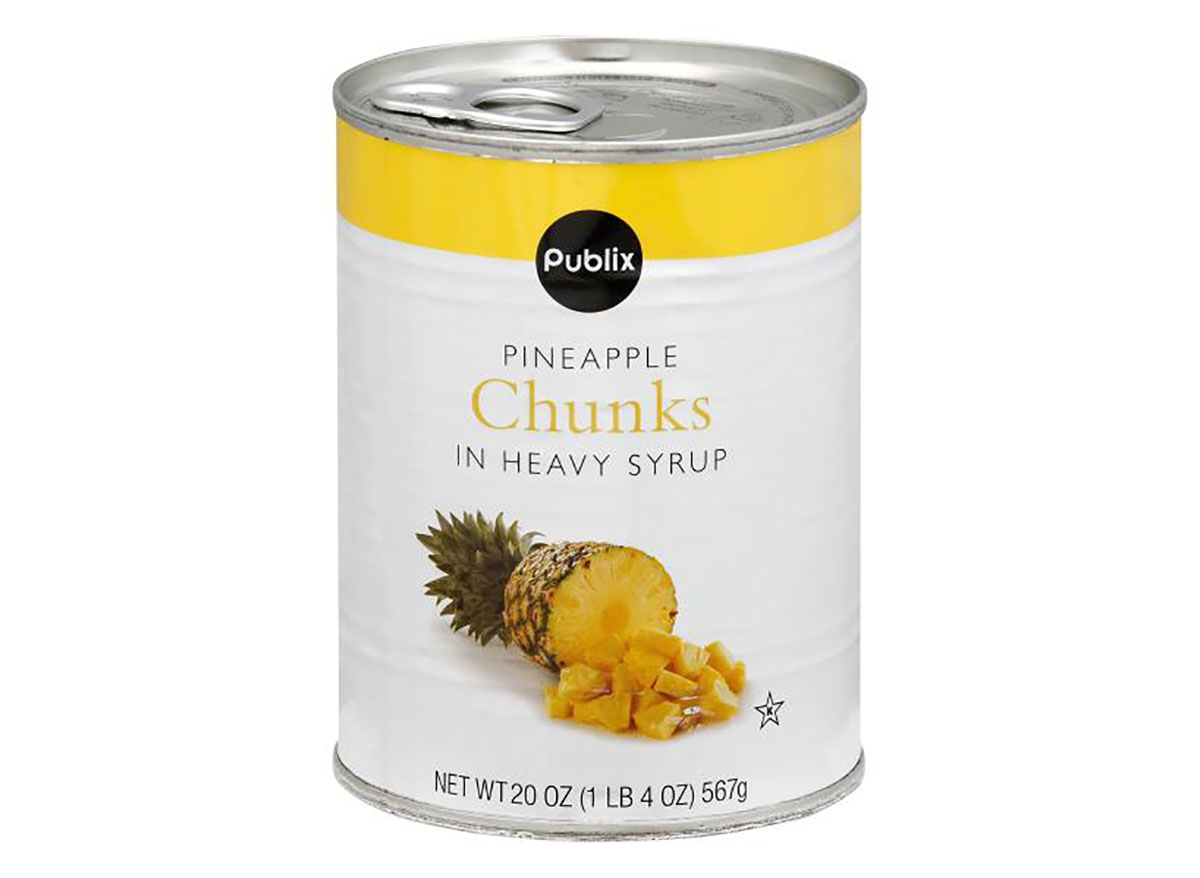 A can of Publix Pineapple Chunks in Heavy Syrup is no better than the fruit cocktail. In fact, with 25 grams of sugar (22 of which are added sugars), it's a bit worse. While it does contain 94 milligrams of potassium per serving, that's only about 2% of your recommended daily intake. If you're looking for high-potassium foods, you'd be better off eating one of these. 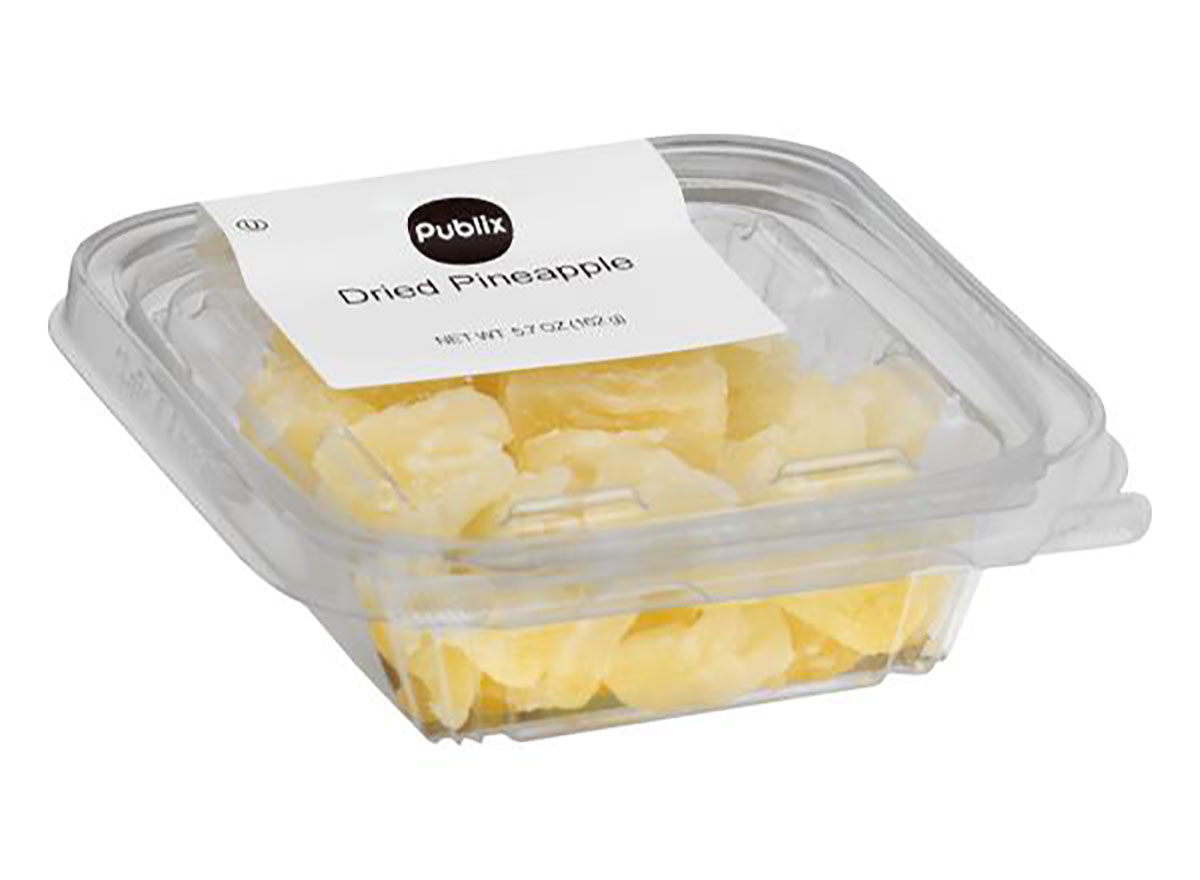 By now, it's clear that canned fruit is not exactly a nutritional slam dunk. So, what about dried fruit? Well, for one, it's easy to carry around for snacking. But, it's so sweet, you might swear it's candy. Well, it might as well be candy given that when you compare dried pineapple to most Halloween candy, you'll find this dried pineapple option may contain more added sugars at 18 grams. 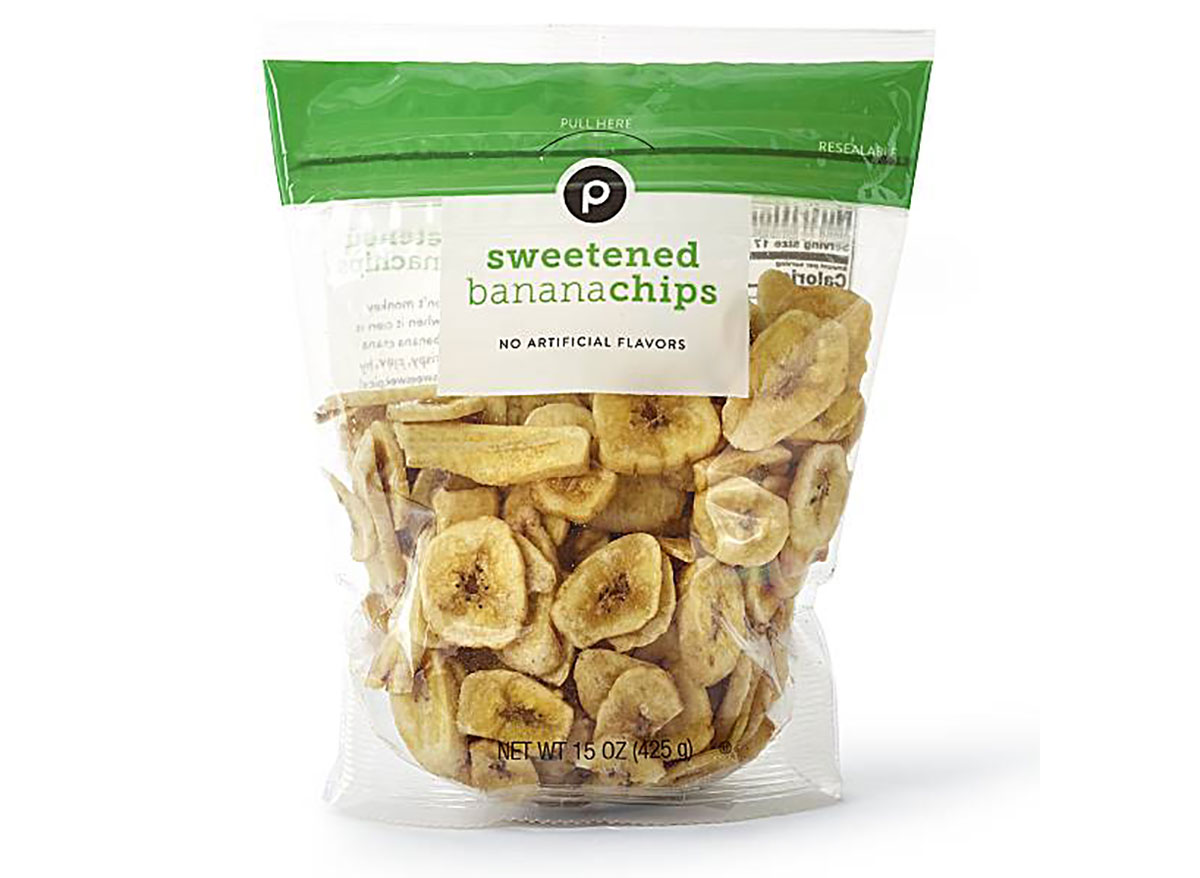 Yes, bananas are fiber- and potassium-rich. But these chips are also super-high in saturated fat (clocking in at 45% of your daily recommended allowance), thanks to the addition of coconut oil. They also contain something called "banana flavoring" which we find perplexing because, as you might expect, bananas are already the first ingredient.

Check out Secret Side Effects of Eating Bananas, Say Dietitians. 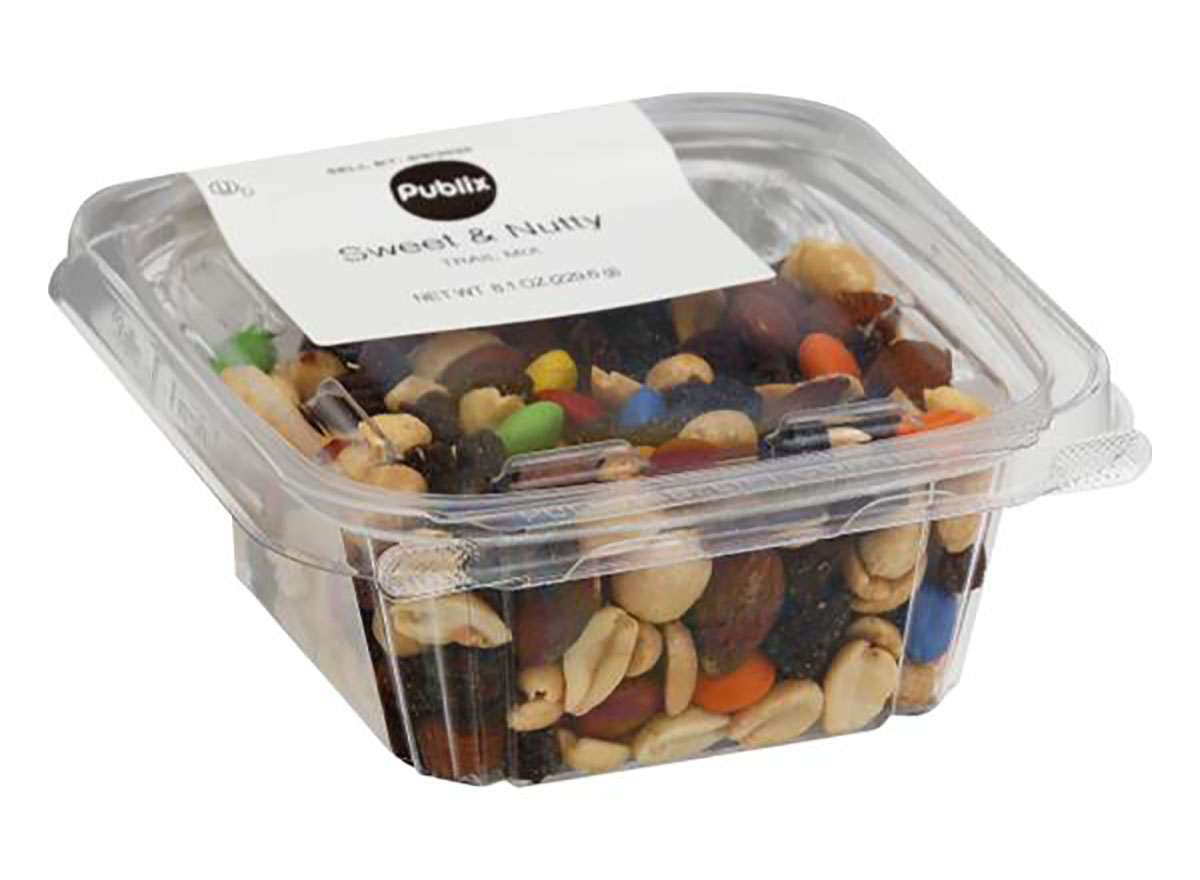 Trail mix can be healthy if it's eaten on the trail. So, if you plan on taking this Publix Sweet and Nutty Trail Mix with you on your next hike, then that's fine—assuming you're exercising portion control, which we all know can be a challenge. As a regular snack food, however, trail mix can be both a calorie and sugar bomb, and this one is no exception. Although it's colorful, it's not because it's high in antioxidants but because its first ingredient is a generic version of M&Ms. 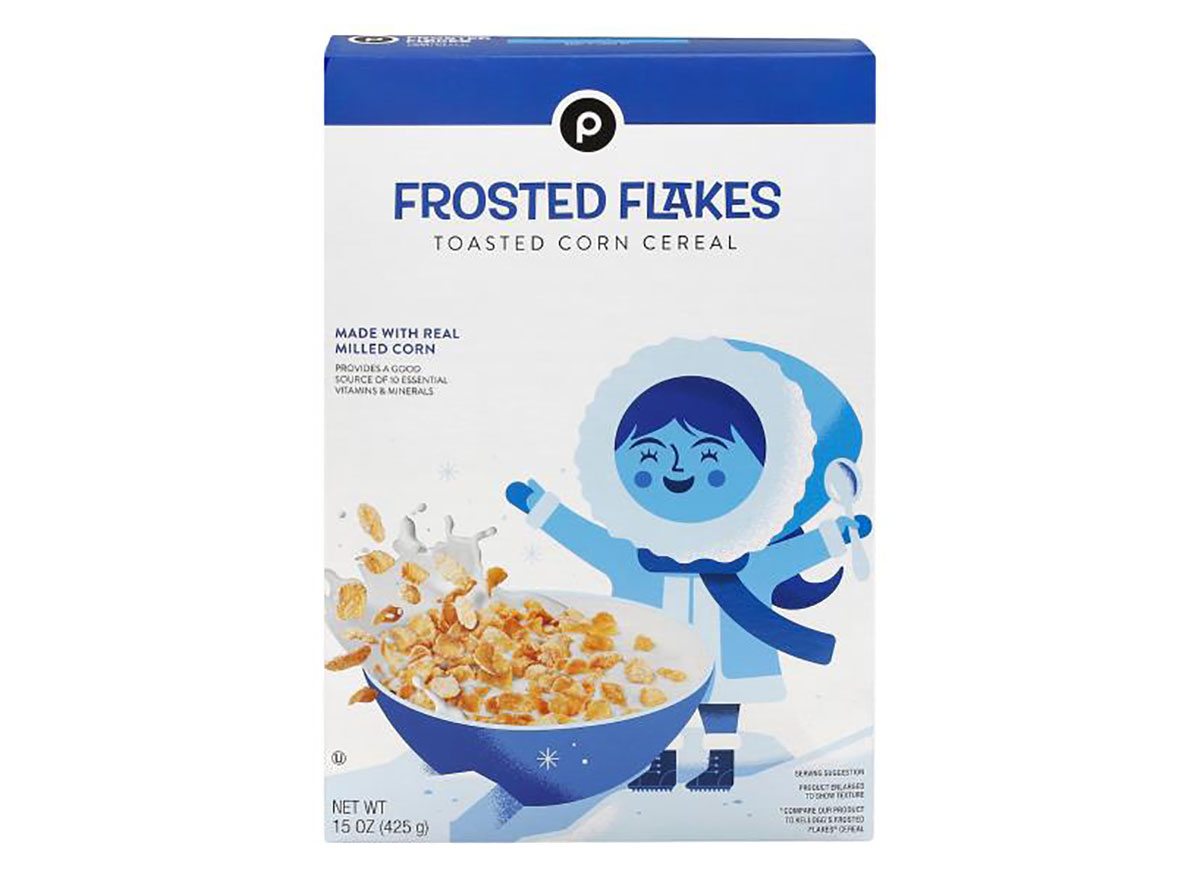 Who knew that the Publix had its own version of Frosted Flakes? Well, while it may be cheaper in price than the big-name brand, this generic cereal contains about three more grams of sugar per serving. For more terrible-for-you cereals, don't miss our round-up of The Unhealthiest Cereals on the Planet. 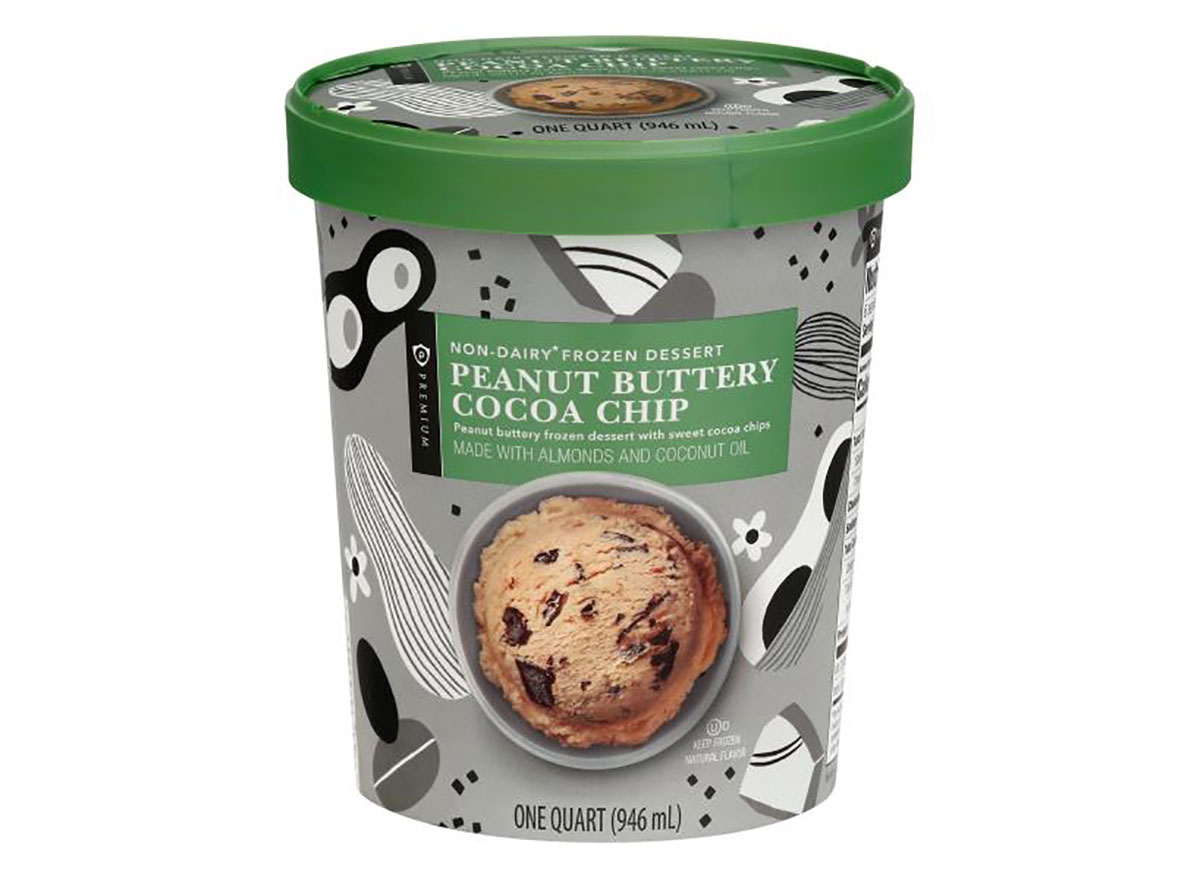 If you're looking for a non-dairy frozen ice cream alternative that packs as many or more calories than your typical premium full-dairy ice cream, then look no further than the Publix Peanut Buttery Cocoa Chip Non-Dairy Frozen Dessert. "Peanut Buttery Variegate" is one of the ingredients and isn't exactly peanut butter but it does have peanuts in it—along with oil, sugar, and salt.

Skip this and instead go for one of The 14 Best Dairy-Free Ice Creams. 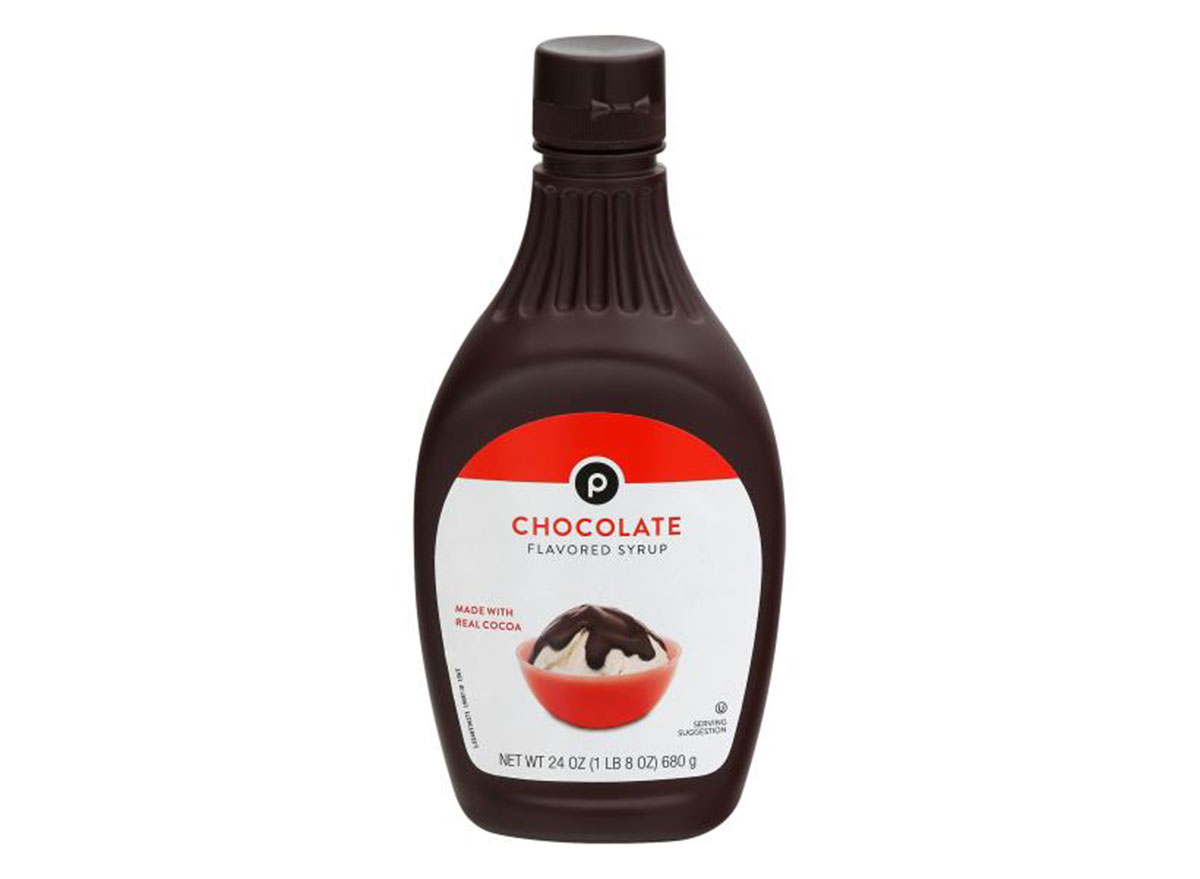 What do you top a nice cold bowl of peanut buttery non-dairy frozen dessert with, exactly? How about a couple of spoonfuls of high-fructose corn syrup-laden cocoa sauce? That's precisely what you'll get with Publix Chocolate Flavored Sauce. 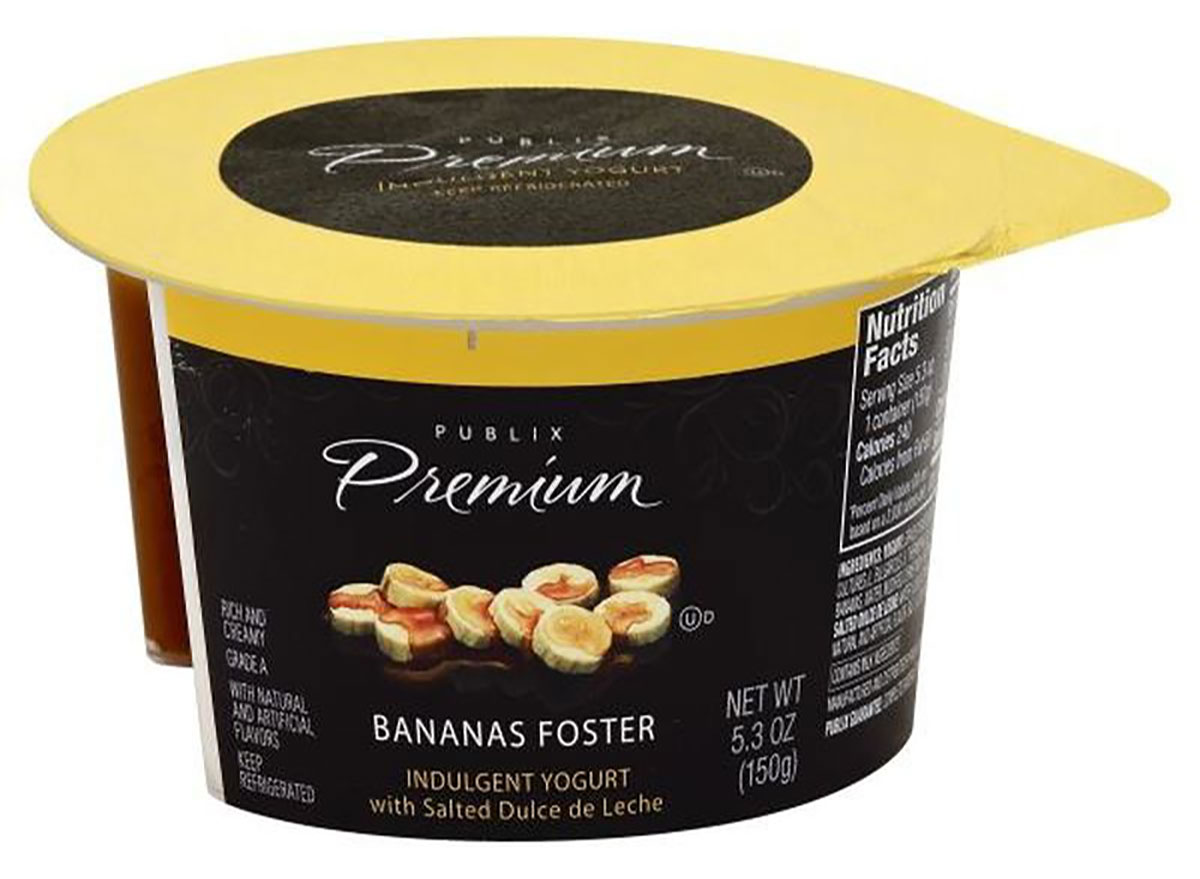 Publix Indulgent Bananas Foster Flavored Premium Yogurt sounds like it should be a healthy alternative to that dessert hall-of-fame member, Bananas Foster. And to the extent you can pretend it resembles actual Bananas Foster, perhaps it is. But it's a stretch. Moreover, with 30 grams of sugar and 4 grams of saturated fat, it's not even healthy. 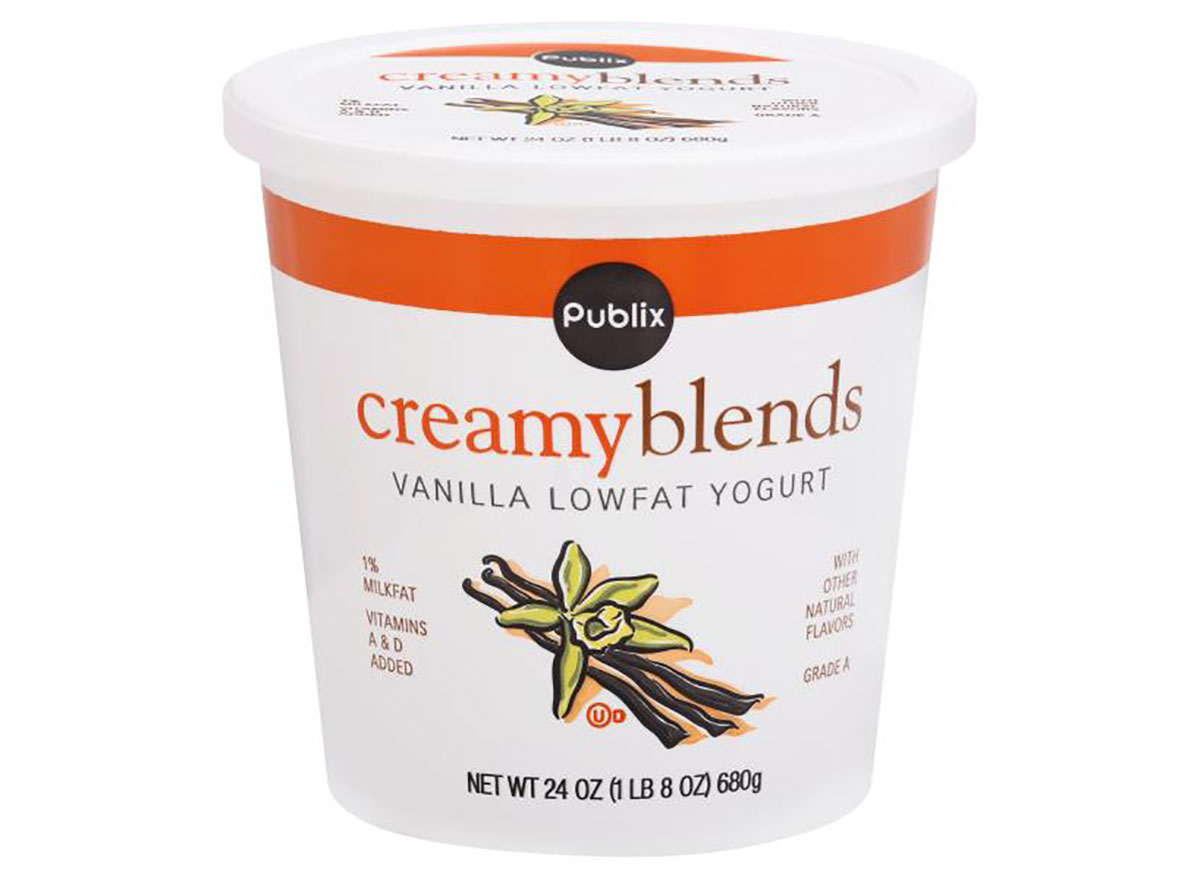 With its low-key packaging and a mere one gram of saturated fat, this low-fat yogurt might appear to be a healthy yogurt choice. But the truth is, it's really high in sugar, clocking in at 27 grams of sugar per serving. And it only offers a mere six grams of protein, which is far less than what you'd get from a Greek yogurt variety. Here are the healthiest Greek yogurt brands on the market.

Lauren Cahn
Lauren Cahn is a food, health, and culture writer whose work has appeared online and in print for Reader's Digest as well as Health Digest, Huffington Post, Taste of Home, and others. Read more
Filed Under
Groceries // Grocery Shopping // Grocery Stores // Shopping Tips