25 Healthy Food Swaps for the Holidays

Stay on track with your healthy eating goals during all the holiday festivities with these simple swaps.

With your office holiday party, family gatherings, and shindigs with friends, the opportunities to slip up around the holidays and gain a few pounds seem endless, and it can be a slippery slope if you head into the festive months unprepared. However, while there's no arguing that it's easy to get overwhelmed by food choices in the holiday season, there are some tips and swaps to have in your back pocket to ensure you don't stray from your wellness goals in the coming weeks.

Some swaps are easy to keep in mind—enjoying a glass of red wine instead of high-fat eggnog—while others, such as making the equally delicious green bean almondine instead of green bean casserole, might seem less obvious but are also very effective. So before you hit the holiday buffet and make some questionable choices, arm yourself with an array of pointers that will help you survive the holidays.

Be smart about your booze.

"If you tend to drink alcohol at parties (or more often during the holidays because of the socializing), go for a glass of wine or a spritzer to keep liquid calories in check," says Marisa Moore, a Registered Dietitian Nutritionist in Atlanta and founder of Marisa Moore Nutrition.

In addition to having fewer calories than most alcoholic beverages, red wine, in particular, contains resveratrol, an antioxidant that is believed to have heart health benefits because it helps prevent blood vessel damage and reduces your 'bad cholesterol.' Because drinks are such a part of the holiday season, it's crucial to know how to imbibe without gaining weight.

Eggnog may be a holiday favorite, but the festive libation is also a nutritional nightmare. Just one (non-alcoholic) cup contains almost 350 calories, 19 grams of fat, and 21 grams of sugar—nearly the recommended amount of sweet stuff for an entire day. Instead of sipping on eggnog, Lauren Manganiello, MS, RD, CDN, and a private practice registered dietitian in New York City, recommends choosing champagne because the bubbly stuff has far fewer calories and much less fat.

Because Champagne is bubbly, it tends to be consumed more slowly than other alcoholic beverages, meaning you likely won't be tossing back hundreds of empty calories. But keep in mind that carbonated beverages can make you bloat a bit…

Load up on lentils.

"As part of an Italian family, we eat meatballs and meat lasagna at Christmas. But as a vegetarian, I make a healthier alternative with pulses, aka lentils" explains Natalie Rizzo, MS, RD. For Rizzo, that means making lentil meatballs or a lentil bolognese sauce instead of using meat, which can be high in fat. "Not only do you cut down on calories and saturated fat by omitting the meat, but you also get a healthy dose of fiber and protein," she says. "Plus, it tastes really good, so meat-eaters will even like this healthy swap."

Reach for the cinnamon tea.

It's easy to consume too much sugar during the holidays, so if you feel yourself going overboard, go ahead and make a cup of cinnamon tea instead of sipping on hot chocolate and whipped cream. According to Nicole Anziani, RD, CDE, the cozy tea may even help decrease blood sugar due to cinnamon's effect on blood glucose.

"Swap a few candies or desserts for frozen grapes," Moore says. "They are a sweet treat and natural source of antioxidants and other polyphenols. Since they are frozen, it takes longer to eat them, which may help that sweet tooth pass!"

Holiday time is nothing if not an endless parade of desserts, and believe it or not, not all confections are created equal. In fact, the sweet treat you choose can impact your waistline. With that in mind, Lauren advises choosing pumpkin pie instead of pecan pie because the former has fewer calories and less fat.

We've already explained why many holiday drinks are on our naughty list, but if you're looking for a non-alcohol beverage, Rizzo has a suggestion.

"Try 100 percent grape juice made with Concord grapes, which is a no-added-sugar, healthy beverage that provides many of the same polyphenols (plant nutrients) and heart-health benefits as red wine," she explains. "For those holiday parties where you don't want to have any added sugar or an alcohol-induced hangover the next day, try this Concord Grape Virgin Sangria."

Get a new nog.

Though we've vilified eggnog for being a high-calorie, sugary disaster, there are healthy alternatives to the popular drink. According to Anziani, drinking Califia Almond Milk Nog instead of a traditional eggnog is worthwhile. Though Califia Almond Milk Nog does still contain eight grams of sugar per each 4-ounce serving, it's much lower in calories, sugar, and saturated fat than traditional eggnog.

Swap in avocados for creaminess.

"Fresh avocados are a heart-healthy fruit that provides naturally good fats," Moore says. "I love using avocados to whip up a luscious chocolate pudding with less saturated fat than you'd get from using heavy cream."

Instead of dunking your chips or veggies into a bowl of sour cream-based dip, Lauren suggests keeping an eye out for Greek yogurt-based dips instead because they contain fewer calories and less fat. Plus, Greek yogurt is packed with protein, crammed with calcium, and popping with probiotics.

Stay away from the casserole.

Sure, casseroles are always a crowd pleaser and easy to pop in the oven to boot, but most aren't very friendly to your waistline. Instead of sweet potato casserole, Rizzo suggests cooking sweet potatoes with a sprinkle of cinnamon and brown sugar. "This is a no-brainer," she says. "Sweet potatoes are loaded with vitamin A and antioxidants, but the loads of butter and marshmallows in sweet potato casserole outweigh those health benefits."

By simply roasting the sweet potatoes with the skin on (for an added dose of fiber) and sprinkling with some cinnamon and a dash of brown sugar or maple syrup, you can really let the natural sweetness of the root vegetable shine. "It tastes just as good and won't put you in a sugar coma," Rizzo says of her healthier swap.

Indulge in a mac and cheese makeover.

Mac and cheese has become an American staple, and for those watching their weight, there are plenty of ways to make the old standby much healthier. Instead of regular elbow macaroni, for example, Anziani suggests using a bean-based pasta or shirataki noodles. You can also cook with low-fat cheese instead of full-fat, or forgo dairy altogether and use turmeric and nutritional yeast. Both of these simple swaps increase fiber and decrease saturated fat, meaning you can enjoy your mac and cheese in a healthier way this holiday season.

Obviously, not every holiday food is unhealthy, so when you find a sensible swap that you like, stick with it.

"When you want something sweet, try chocolate-covered, cocoa-dusted, or cinnamon-spiced walnuts," advises More. You can make them yourself or find them at most major grocery stores, specialty shops, and in the bulk bins at natural foods stores. "The walnuts will help kick off the holiday season with a dose of heart-healthy fat, fiber, and protein!"

Cheese and cream-based dips abound during the holiday season, but instead of indulging with something that uses cream cheese, for example, Lauren suggests choosing hummus. The crowd-pleasing spread has fewer calories and less fat than a cream cheese dip.

If you're at a party with an antipasto platter or making one for a soiree of your own, Rizzo advises reaching for the veggies instead of fatty meats and cheeses.

"I like to make antipasto with some meat and cheese, but make the veggies the star," she says. "The majority of the antipasto plate can be olives, peppers, artichokes, tomatoes and whatever other veggies you like. That way, it's a healthy and lower-calorie start to your meal!'

Like drinks and dips, cookies are everywhere you look during the holiday season. While it's fine to indulge every now and again, it's also good to have a cookie swap in mind so you don't overdo it. Anziani's go-to sweet treat that won't have you busting out of your jeans is a date filled with one teaspoon of almond butter and topped with cinnamon.

"This decreases refined sugar and saturated fat," she explains. "Instead, it acts as a sweet treat that includes some fiber and monounsaturated fat. The cinnamon dust can help lower blood sugar response."

Instead of fried appetizers, Rizzo advises serving or reaching for some shrimp cocktail. "There's nothing like a good potato puff, but the calories in those little fried finger foods can add up quickly," she explains. "Holiday guests are inclined to nosh before a meal, so why not serve shrimp cocktail instead. This appetizer puts the protein-rich seafood on display and is served with a spicy cocktail sauce."

Though reaching for a veggie dish can be healthier than loading up on starches, not all greens are the same. With that in mind, Anziani suggests avoiding a high-fat vegetable dish such as green bean casserole, and opting for green bean almondine instead. Not only is green bean almondine just as tasty as the casserole variety, but it also has much less saturated fat and eliminates the refined flour. Instead, it actually introduces heart-healthy monounsaturated fat, courtesy of the almonds.

"Instead of apple pie, choose baked apples," Lauren says. Not only are baked apples much easier to make than a pie, but the dessert choice also has far fewer calories and much less fat and sugar.

If turkey is a staple at your holiday dinner table, choose roast turkey instead of the deep-fried variety. Lauren says roast turkey has fewer calories and less fat, but is just as tasty as the fried version. 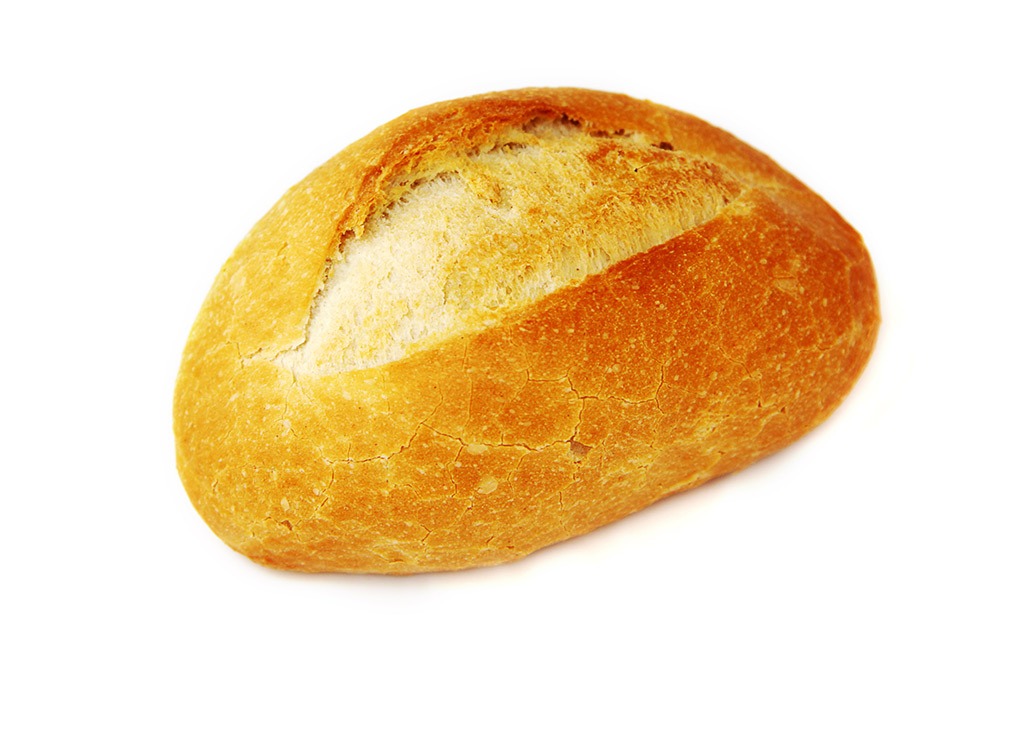 There's no denying dinner rolls are delicious, but instead of carb-loading so early on in the meal, steer clear of the bread basket and opt for veggies (paired with hummus or a Greek yogurt-based dip) instead. Your waistline will thank you come January.

If given the choice, pick sweet potatoes over their white potato counterparts. Although white potatoes offer some potassium and fiber, sweet potatoes reign supreme in the nutrition department. A large sweet potato contains around 4 grams of satiety-boosting protein, 25 percent of the day's belly-filling fiber, and 11 times the recommended daily intake of vitamin A. What's more? It's less than 200 calories.

Eat zucchini noodles instead of pasta.

Zucchini noodles look like spaghetti, but the similarities pretty much end there. Eating zoodles over pasta cuts out empty carbs but adds ever-important vitamins and fiber. If prepared well, zoodles can be just as flavorful as a bowl of spaghetti.