15 Ways to Lose Weight Before Breakfast

Jumpstart your weight-loss goals before you even head out the door.

By Julia Chatzky
Eat This, Not That! is reader-supported and every product we feature is independently vetted by our editors. When you buy through links on our site, we may earn a commission.

Being super strict with what you eat can get exhausting, not to mention hard to maintain. Luckily, there are other ways to jumpstart your weight-loss goals that are so easy, you'll barely notice any changes to your daily routine.

But here's the thing: You have to start early in the day. Using these early morning tricks, you'll rev up your metabolism, burn some fat, and curb those junk food cravings before you even sit down for breakfast. These little lifestyle tweaks will help you slash calories, boost mental and physical health, and start each day on a positive note.

Incorporate these slim-down tips as part of your daily routine, and we promise you'll find fewer and fewer of these 20 Weird Reasons Why You're Gaining Weight Fast as well. And when it's time for breakfast, look no further than picking up a copy of Zero Belly Breakfasts. With hundreds of delicious and nutritious breakfast secrets—and more than 100 mouthwatering recipes you can prepare in minutes—this new book will have you looking and feeling great in no time.

Getting to the gym first thing in the a.m. is a great way to start your day, especially if you're trying to lose belly fat. In the morning, less insulin is present our bodies. That means when we exercise on an empty stomach, our bodies break down and burn through our fat stores. In fact, researchers found that those who pump some iron in the morning before eating their first meal burn 20% more calories than those who work out with fuel in their tanks. The same researchers noted that this habit had zero effect on the subject's appetites or consumption of unnecessary calories later on in the day, which means you won't get those unwanted cravings or hunger pangs.

Apple cider vinegar, a popular wellness trend to help boost your weight-loss goals, might actually be here to stay. The fermented drink is made up of crushed apples and added to yeast and bacteria. Sounds yummy, right? By diluting a tablespoon of the strongly scented potion with a glass of water, studies show signs of increased weight loss. A well-known study published in the journal of Bioscience, Biotechnology, and Biochemistry found that over a 12-week period, Japanese men aged 25-60 all showed greater weight-loss results compared to the men who were given a placebo. The results? A smaller body mass index, less visceral fat, a smaller waist measurement, and lower triglyceride levels.6254a4d1642c605c54bf1cab17d50f1e

Starting your day with water is always a good idea. You'll crave more H2O throughout the day, feel fuller longer, and have more energy. And for weight loss, water does wonders. Water acts as a natural appetite suppressant; in a study published conducted at the University of Utah, dieting participants who drank two glasses of water before a meal lost 30% more weight than their peers left parched.

You've heard it before: Getting a solid eight hours of rest really makes a difference when trying to lose weight. A study conducted at Northwestern University School of Medicine found that folks who slept in until 10:30 ate twice much fast food and half as many healthy veggies and fruits as those who rose earlier. That adds up to a whopping 248 added calories a day. (A Mayo Clinic study put the caloric difference at more than twice that much). Other studies, including one from Roehampton University, found that while night owls pack on the pounds, morning people are lighter in both weight and mood. Bottom line: set the alarm. And then listen to it. 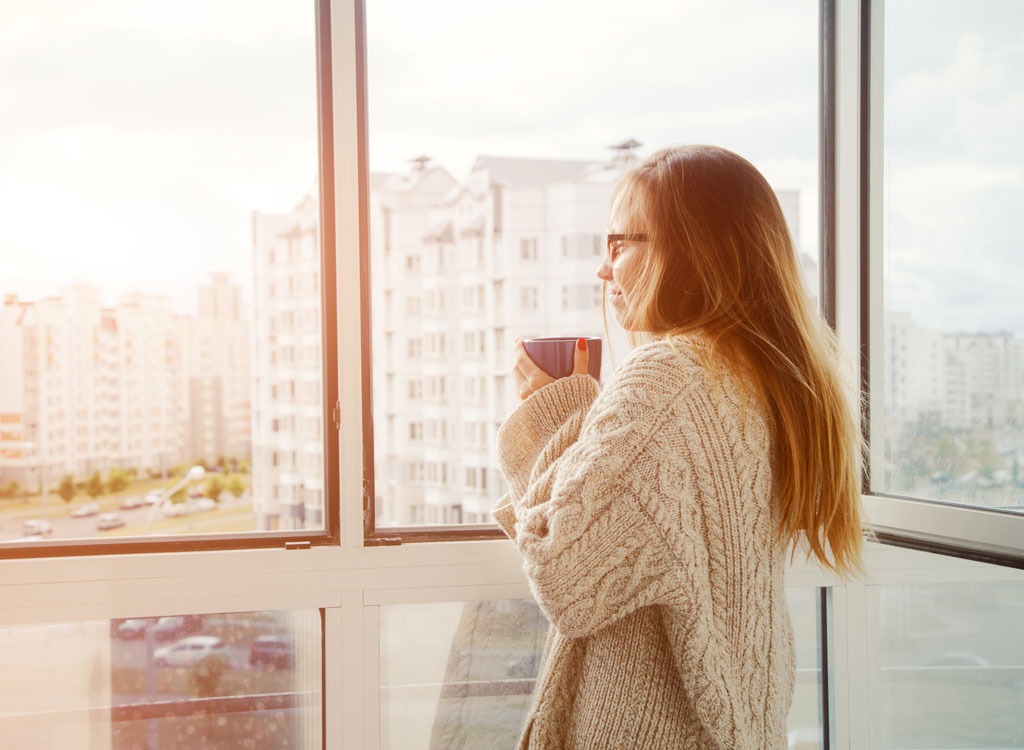 Letting the sunshine in first thing in the morning won't just help you wake up; it can also help you slim down, too. A study published in the journal PLOS ONE showed that people who got direct exposure to sunlight in the morning on average had significantly lower BMIs than those who had most of their light exposure late in the day, despite what they ate throughout the day. According to studies, the morning sun helps your body synchronize its metabolism, allowing you to burn fat more efficiently. Your daily cup of jo doesn't just give you a jolt of much-needed caffeine. Everyone's favorite morning beverage is also a natural diuretic, meaning it helps stop belly bloat and keeps things moving in your gut. It also keeps your metabolism up and running, so it's especially great to have coffee before the gym. In fact, those who drink their java before their sweat sesh burn about 15% more calories post-exercise than those who don't.

But coffee isn't the only morning beverage that can help you lose weight. There's matcha, which is like green tea on steroids. Matcha, a green tea powder, has a concentration of epigallocatechin gallate (EGCG) that's 137 times greater than that in most store-bought green tea. The research is promising. In one three-month study, men who drank green tea equivalent to one serving of matcha lost four times the belly fat and two times the weight compared to a group given a placebo. Matcha actually has less caffeine (about 70 mg) in a cup than an equal amount of coffee (95 mg). Too much caffeine has been shown to bring on the belly fat. So maybe it's time to sip on matcha instead.

Forget the dress and heels. Make every day casual Friday (as long as your office gives you the go-ahead!) A study conducted by The American Council on Exercise suggested those who wear casual clothing, as opposed to formal office attire, are more likely to increase physical activity levels throughout their daily lives. In a conducted study, participants who wore denim took almost 500 more steps, burning 25 more calories per day than on the days they were dressed more professionally. That may sound too small to make a difference, but it all adds up! Just wearing denim once a week could save you 6,250 calories a year — that's enough to offset the average amount of pounds annually gained by most Americans. 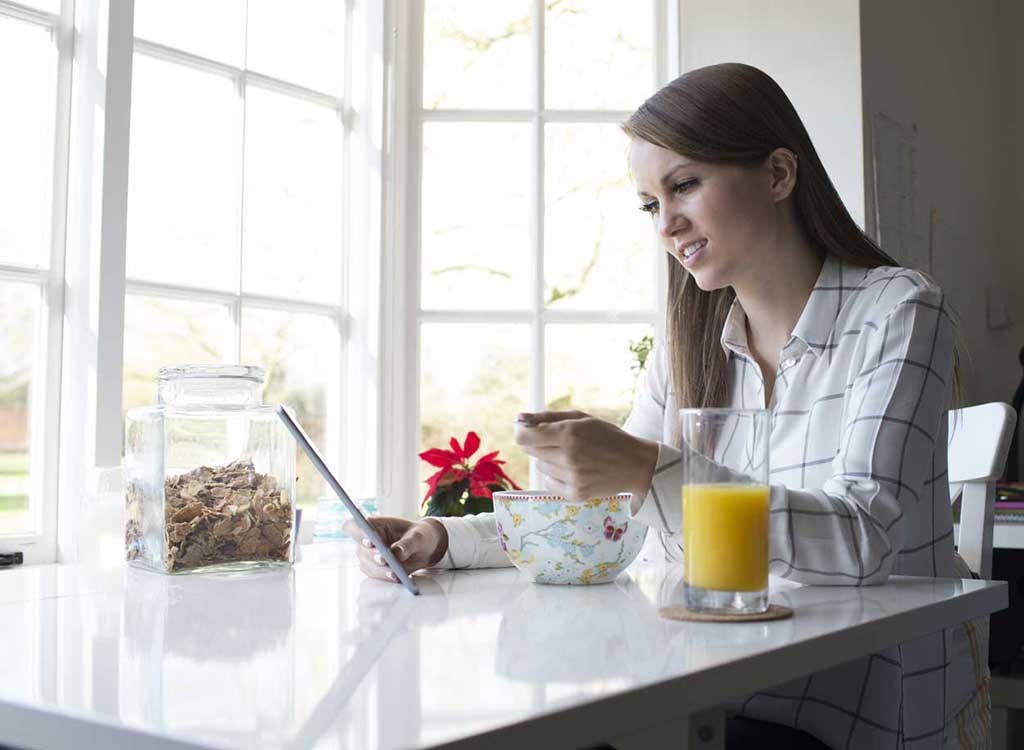 Instead of eating breakfast before you get to work, try to wait and eat a healthy breakfast once you've been at your desk a couple hours. Moving your meal time window later in the day reduces the number of hours you spend consuming calories throughout the day. According to a study published in Cell Metabolism, pushing back breakfast time helps you lose weight, regardless of what you're eating (but try not to go overboard on the calories). In the study, which was conducted on mice, subjects were carefully watched for 100 days. Half were allowed to nibble all hours of the day on a healthy controlled diet, and half only had access to food for eight hours but could eat whatever they wanted. The mice with a short eating window stayed lean, while the others packed on some pounds. 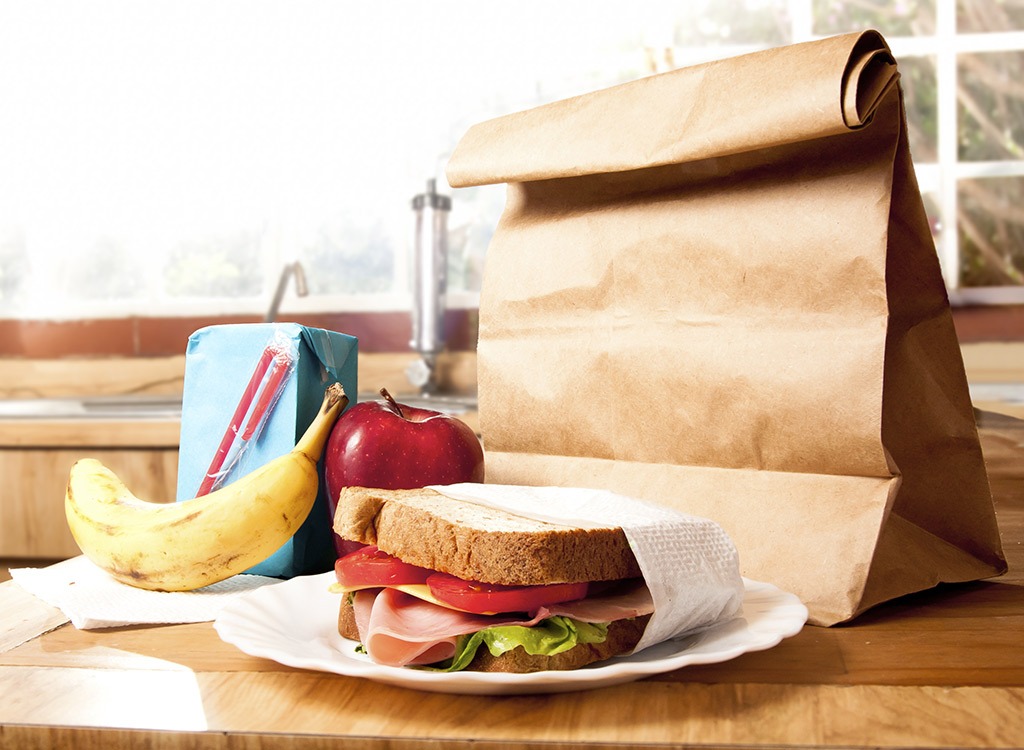 Ensuring that you'll fuel your body with nutritious food throughout the day is one of the simplest ways to stay on track with your weight-loss goals. The better you plan, the better you eat. Rather than leaving your lunch up to what your co-worker wants, make sure you'll eat something healthy with fiber and protein. In a study published in the Journal of Academy of Nutrition and Dietetics, women who went out to lunch once a week or more lost five pounds less than women who brought lunches from home. Skip the sabotage and check out our favorite low carb snacks.

Play with Your Pup 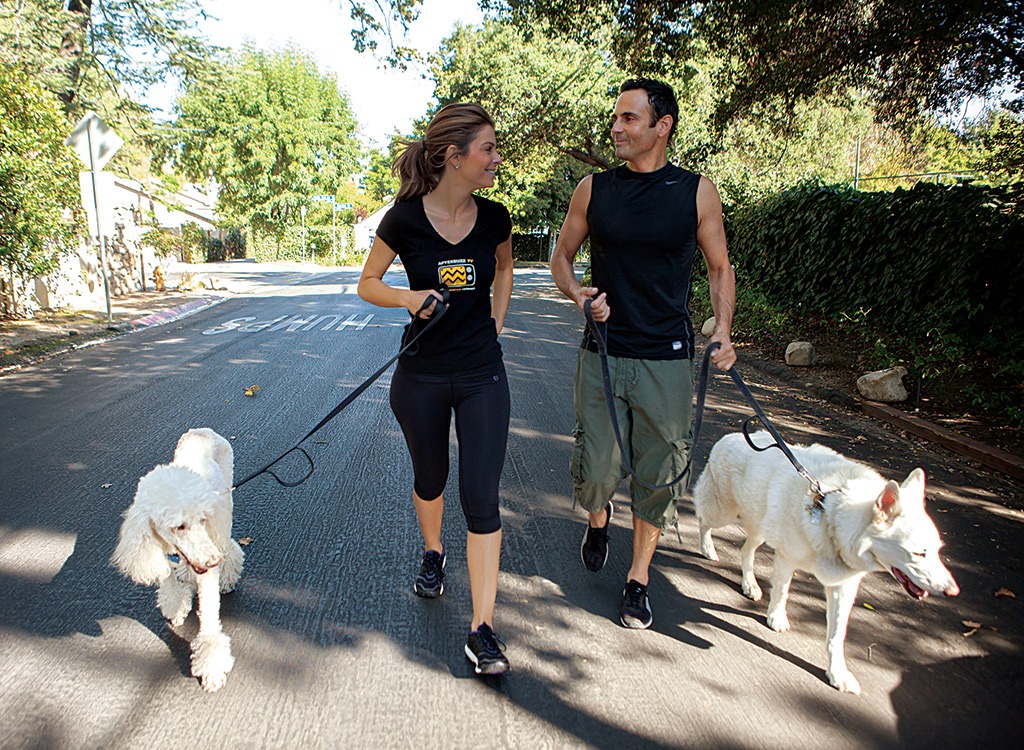 Don't just let your furry friend out in the backyard — take him on a walk! Walking more is one of the simplest ways to drop some pounds. An added benefit of getting up and moving in the morning is that it makes it easier to fall asleep at night. And as we mentioned (and as research shows), sleep is a key tool in shedding those unwanted pounds. In one study, just 45 minutes of moderate walking five times a week led to better sleep in nearly three-quarters of participants. Walk your pooch those 45 minutes at a slightly speedy pace twice a day and you'll burn an extra 600 calories! That's a pound of weight loss a week. Plus, getting a few extra steps in a day is one of our 50 Best Weight Loss Tips.

A messy kitchen could lead to a messy life. Take some time and clean up your kitchen! According to a study published in the journal Environment and Behavior, people eat 40% more food when they're in a messy kitchen. Even worse, the research also found that women who were the homeowners of this mess were twice as likely to eat from the cookie jar compared to women who kept their kitchen tidy

Being stressed out can pack on the pounds. A study conducted at Ohio State University found that in the 24 hours following a stressful event, like a fight with their husband, women burn 104 fewer calories than the women who weren't stressed. Think 104 calories is no big deal? Think again. A difference like that could lead to weight gain of almost 11 pounds per year. Next time, say sorry and try and work it out.

It may sound silly, but taking a selfie can help you stick to your weight-loss goals. That's because you'll be able to see changes occurring in your full body, giving you the motivation to keep up the good work throughout your day. According to researchers at the University of Alicante in Colombia, full-body and waist-to-hip ratio pictures make the biggest difference for people who need some help staying on track.

Taking an extra minute to say "ohm" can make your weight-loss journey much more efficient. In fact, in a 2014 study, researchers found that individuals who meditate are less likely to overeat or give in to emotional eating. Just five minutes a day of deep breaths and guided thinking will help you shed a few.

It may sound too good to be true, but a little extra time in bed with that someone special can lead to even greater weight-loss success. The heart-pounding fun not only blasts calories (it's totally a workout), but it also helps you curb carb and fat cravings. Wondering how? A good romp in the sheets keeps your levels of cortisol, a high-anxiety hormone, in check. Too much cortisol calls for unwarranted cravings. To get in the mood, make sure you avoid the 27 Foods That Kill Your Sex Drive.