The Worst Menu Items McDonald's Employees Would Never Eat Themselves

Some machines aren't cleaned as often as you'd hope.

McDonald's might not be known as a pinnacle of health, but it is a pinnacle of deliciousness. And for those days you're too tired to cook or just want something quick and easy to eat, the fast-food chain seems like an ideal option. But it's worth noting that there are some menu items even Mickey D's employees won't eat.

Thanks to a variety of threads on places like Reddit and Quora, employees have weighed in on what you might want to steer clear of when visiting the Golden Arches. That doesn't mean you should never eat the foods on this list, but it's worth keeping in mind the next time you're there.

Here are the menu items McDonald's employees won't eat. Plus, check out We Tried Every Burger at McDonald's & This Is the Best.

One McDonald's employee wrote on Reddit that the fancy drink machines are "routinely neglected," in terms of cleaning, and they called the machines "horrifically dirty" because they aren't cleaned often enough.

Still, other McDonald's employees noted that their locations clean the McCafé machines nightly, so it depends on what location you're visiting. And if you want even more McDonald's, check out these 20 Failed McDonald's Menu Items You Won't Believe Existed.

And for more fun facts, sign up for our newsletter to get daily recipes and food news in your inbox!

And for more on what to skip at the chain, here are the 10 Worst Menu Items at McDonald's.

If you get a fresh batch of nuggets, they're delicious. However, one McDonald's employee wrote on Reddit that chicken nuggets might be sitting out for extended periods before being served.

"I used to work at McDonald's. If you order, especially chicken nuggets, just ask for them fresh. Otherwise, they've been just sitting in their container in the heat," the person wrote. "They have a timer, but 9/10 times when that timer goes off, people just reset the timer instead of making new ones. This could go on until all the nuggets are sold." 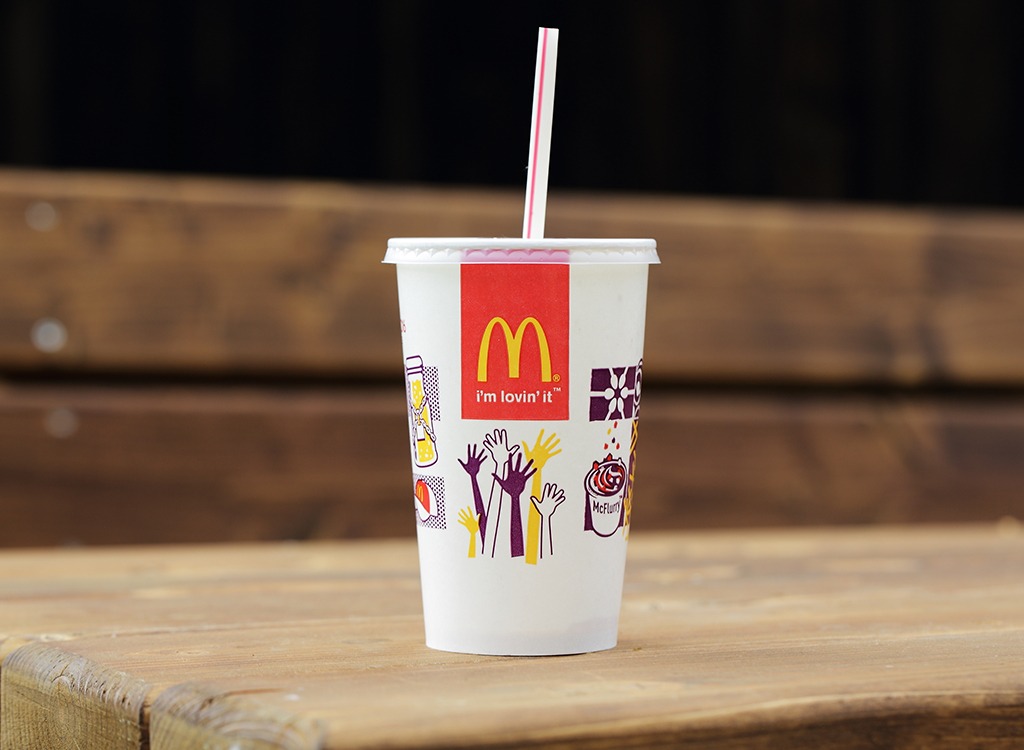 This is a tough one to swallow, especially if you love getting a fountain drink with your burger or nuggets. It's not an issue that's specific to McDonald's, but some self-identified restaurant workers on Reddit have claimed that ice machines are cleaned rarely, if ever. It's best to just hold the ice.

McDonald's prides itself on using real eggs, and you can choose egg whites on some meals, in addition to the folded and round egg varieties. But if you're trying to get a somewhat healthy meal, the egg whites might still not be a safe choice. One self-identified McDonald's employee wrote on Reddit that the grill operators might spray a lot of butter onto the eggs while cooking them.

"The egg white delight is just as unhealthy, if not more so, than the regular round eggs. The amount of butter (at least in my store) sprayed on the grill must up the calorie and fat count like crazy," the employee wrote.

One employee noted on Reddit that the fish sandwich is "deep-fried from frozen." But considering that's how McDonald's fries are made, too, that's not exactly a reason not to order the sandwich. What might be a more compelling reason to choose a different option, though, is that you might not get a fresh one because it's a less-popular item.

"When I worked at McDonald's the filet of fish was never ordered. We had to make them at 11 when lunch started and had the same ones in the tray until the elderly people came to get their supper at 3 P.M. Then replace them and we threw away those same ones when we closed," one self-identified McDonald's employee wrote. "Never order them."

Of course, you can avoid this situation by asking for your Filet-O-Fish cooked to order.

Other McDonald's employees also told Business Insider that they avoid Filet-O-Fish sandwiches, too. But only because they don't like the taste.

You might think you're getting a filling meal by ordering a Big Mac or a double cheeseburger, but according to an employee on Reddit, those patties might not get as much time on the grill.

"The small patties. Yea…the ones that come on your double cheeseburgers and Big Macs. Those things come off of the grill still red with blood and then we would shove them in the trays where they would stay for hours," the employee wrote. Another McDonald's employee wrote on Quora that there's "a very good chance your beef hasn't been cooked 100%."

Still, other McDonald's employees chimed in on the Reddit thread with positive anecdotes about their stores, so your burger is probably going to be just fine.

Not all the information out there about the Golden Arches is factual. Here are the 50 Biggest Myths About McDonald's Food.

"No matter how hot your apple pie is, it is NEVER fresh," one McDonald's employee wrote on Quora. "I don't remember the gold standard timings, but we used to leave the apple pies for ten minutes to drip and cool above the oil, and then half an hour in the warming thingy majiggy before we served them."

As with the chicken nuggets, some employees noted that the apple pies might spend too much time in the restaurant's warming spots. (And speaking from experience, I've had some seriously dried out McDonald's pies, to the point where the apple was barely discernible.)

If you've wondered about those finely-chopped onions atop your burger, there's a very specific reason they look the way they do.

"The small diced onions that go in sandwiches are actually dehydrated onions. They come in bags and need water to make them look all nice," one McDonald's employee wrote on Quora. "Onion[s] for standard hamburgers are made from powder," another person wrote on the thread.

Dehydrated onions aren't "powder," and they're safe to eat, but if you're expecting a fresh onion slice on your burger, you might be sorely disappointed.

RELATED: We Tried Every Breakfast Sandwich at McDonald's & This Was the Best

When the McDonald's ice cream machines are working, they're home to some delicious and cheap treats. But one photo that went viral in 2017 might have you rethinking that ice cream. The Independent reported that a McDonald's employee was fired for posting photos of black-looking gunk that he claimed had come from the ice cream machine.

McDonald's stated that the drip tray in the photo doesn't touch any food items, but that's not much comfort if you've seen the picture.

One employee at a Canada McDonald's wrote on Reddit that the milkshake machine could get "crusty" when it wasn't cleaned often enough.

"It is cleaned bi-weekly and every night it just heats up the milk contents so that it kills off the bacteria in the milk. The nozzles are not cleaned properly, nor are the dispensers save for the bi-weekly cleanings," the employee wrote. "It gets caked on and reminds me of icing sugar on the wall." Appetizing.

"The McRib is literally just spam in a rib-shaped mold," one employee wrote on Reddit. Another wrote on the thread, "McRibs appear on the menu when pork-side-products market charts reach yearly lowest. Now I will let you think about what it's made of."

The fast-food chain hasn't kept the McRib's creation process a secret, though. In 2014, McDonald's shared a video about how the McRib is made. It involves meat formed into the frozen, rib-shaped patty.

It's worth remembering that these are all anonymous stories, and every McDonald's location is different. So just because one of them might neglect to clean something or leave food sitting out doesn't mean you'll have a bad experience somewhere else. Still, if you're adamant about getting fresh food, you might be better off choosing a menu item that isn't on this list. And for even more from the fast-food chain, don't miss the 25 Craziest McDonald's Menu Items From Around The World.

We Tried 7 Fast-Food Cheeseburgers & This Is the Best

Meghan De Maria
Meghan De Maria is a senior editor at Eat This, Not That!, specializing in food, product, and restaurant coverage. Read more about Meghan
Filed Under
Fast Food // McDonald's // Restaurant Chains