You'll never guess what realities about the fast-food chain have been kept under wraps... until now.
By Sarah Crow | Jordan Summers-Marcouillier

McDonald's is the world's most popular fast-food chain, with more than 68 million customers served each day in its thousands of restaurants across the globe. Ever since the company was founded in 1940, its reach has expanded exponentially, with stores in more than 100 countries.

However, while McNugget and Big Mac connoisseurs may think they know everything there is to know about the Golden Arches, only McDonald's employees know what goes on behind the counter.

From how likely you are to get your hands on fresh fries to what's really in those Egg McMuffins, these McDonald's secrets—straight from McDonald's employees who spilled the beans on Reddit—are sure to surprise even the most die-hard fans. Read on for their secrets, and for more fast-food intel, don't miss The 10 Most Toxic Ingredients Lurking in Fast Food.

Most wouldn't drink the sweet tea

The infamous Sweet Tea at McDonald's may not be for the faint of heart and definitely not for anyone looking to lower their sugar intake. One Redditor admitted that while he worked at McDonald's, the sweet tea was "brewed in a large bucket mixing hot water with a full bag of granulated sugar." But the real kicker? According to another Redditor in the same thread, most employees wouldn't drink the chain's sweet tea themselves. "I don't know how anyone can drink the stuff, but in the south, it's basically pure sugar water with a dash of tea for color."

You have to ask for fresh food

If you want your World-Famous Fries and McDouble fresh out of the oven rather than precooked and reheated, you have to ask. Don't just assume everything is fresh based on the chain's high ingredient turnover. "Some places do a bad job at keep[ing] track of the fresh timers. I'd personally ask for everything fresh even if you have to wait 3-5 min[utes] for it to be ready," one Reddit user wrote. 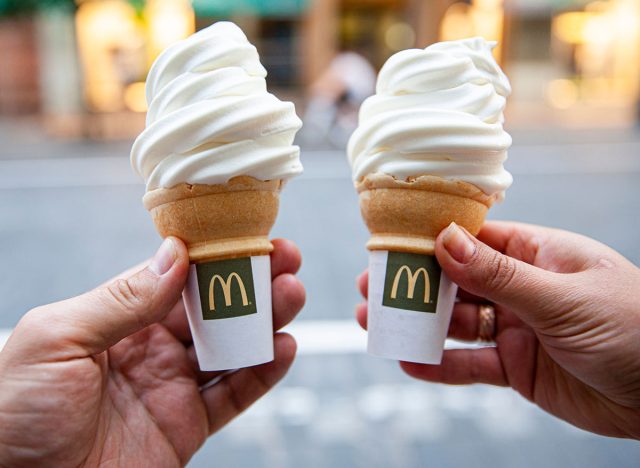 The running joke about the ice cream and milkshake machines being constantly out of service isn't far off. McDonald's employees confirmed that the reliability of the frozen dessert machines is questionable, at best. "The McFlurry/milkshake machine is prone to breaking all the time and the amount of time it takes to get it repaired can put it out of commission for a day or two," wrote one McDonald's employee on Reddit.

According to the insider, there are also separate, but visually similar, mixes for McFlurries and milkshakes, and when they get poured in the wrong place, the machine has a habit of shutting down. It's so problematic, lawsuits have been started.

Egg McMuffins are made with real eggs

We've all heard rumors about what goes into fast food meals, but fear not: Your Egg McMuffin is made of actual eggs. While it may be hard to believe that anyone could get an egg so perfectly round, it's the result of a precise cooking method. "We have to break the shells and place the eggs in special rings on the grill. We then place a cover over the top of the rings (our store cooks eight at once) and put a bit of water into a small funnel at the top. The eggs are steamed and cooked at the same time," wrote one McDonald's cook. "It's actually pretty cool, and it takes a while to 'master' the right technique to get the eggs looking perfectly round."

There are cheaper ways to get your favorite meal

Want to save a few bucks on your next Mickey D's order? It's possible. "You can order a sausage muffin and a side of round egg cheaper than you can order a Sausage Egg McMuffin," says one Redditor, who recommends other menu hacks—like ordering kids' meals with double fries, or ordering an egg and cheese muffin instead of an Egg McMuffin.6254a4d1642c605c54bf1cab17d50f1e

While McDonald's employees may not be the best-compensated individuals in the restaurant world, they do get some pretty sweet savings. "We get things like discounts with Apple, Via Rail, Hotels, 25% off shoes at Payless," wrote one McDonald's employee.

Drive-thrus won't serve you on foot

If you stumble up to a McDonald's drive-thru on foot and employees won't serve you, they're not just being difficult. "We have a policy that forbids us from serving people who are not in a 'motorized vehicle' in [the] drive-thru because it can be unsafe," wrote one employee. "Bicycles, electric scooters, and pedestrians cannot be served."

RELATED: What Happens to Your Body When You Eat a Big Mac Every Day

There's a cash-only time every day at 24-hour locations

If you find yourself craving McDonald's in the middle of the night, you might want to bring cash with you. "McDonald's that run 24 hours are required to restart their system nightly," wrote one employee. "This results in a 30-90-minute window where we are cash only. The person taking the orders has to literally write down the orders, check prices, and add the total because nothing can be entered into the system."

They find your special requests annoying

If you're making a lot of substitutions on your order, it's going to take a while to come out of the kitchen. Worse yet, you'll be holding up the whole store in the process. "Anything that has to be 'custom' we label it as 'special request,'" wrote one employee. "So, they have to literally stop working just to come over and ask what the special request is."

And if you think that ordering fries without salt will get you a fresh batch, there's an easier way that's less taxing for employees. When you order them without salt, the employees may have to clean the scoop and basket. Instead, just ask for fresh fries if the store isn't busy. You'll still get a hot batch without causing the employees an extra headache. And for more tricks, check out the 6 Best Fast-Food Hacks That Can Shave Dollars Off Your Order.

They will charge more for certain ingredients

The milkshake machine gets a weekly cleaning

The milkshake machine may be working, but that doesn't mean it's clean. One employee wrote on Reddit that their milkshake machines were cleaned just once a week. "We actually have these tubes that hook up to tubes in the machines," they wrote. "The machine then sucks soap, water, and sanitizer through all the pipes. We did it every Saturday."

McDonald's beef is Grade A

While there are rampant rumors that everything from eyeballs to worms is in your McDonald's hamburger, that's hardly the case. The burgers are made of high-quality stuff. "[It's] Grade A beef. That's it," wrote one employee. "The only stuff we added on it was salt and pepper after it cooked."

Looking for a job that keeps you on your feet? Try applying for a drive-thru position at your local Mickey D's. "We're not allowed to sit, but we're expected to stand at our windows for hours on end," wrote one drive-thru employee. "Standing in one spot for long periods of time really takes a toll on my lower back and feet."

The hiring process is more stringent than you think

Getting hired is harder than you think. "Although McDonald's is a no-skills-required job, not just anyone will get hired. We turn down a lot of people during the hiring process," says one longtime McDonald's employee. She goes on to say that good communication skills, a team player attitude, having extra-curricular activities on your resume, and potential for advancement are all qualities that managers look for when hiring.

A version of this story was originally published in July 2022. It has been updated to include new information.

Sarah Crow
Sarah Crow is a senior editor at Eat This, Not That!, where she focuses on celebrity news and health coverage. Read more about Sarah
Filed Under
Burgers // Fast Food // Food Crimes // food safety // McDonald's