The Best & Worst Popcorn in America—Ranked!

Spoiler alert: Microwave popcorn is the way to go!

Popcorn is one of the best salty snacks out there, because not only is it tasty, but it's light enough that you can feel good about eating a heaping serving of it. But while some popcorn varieties will fit well into a healthy eating plan, others are simply an indulgence.

For example, you probably already know that movie theater popcorn is a salt and calorie bomb. At AMC, a small popcorn without butter has 740 milligrams of sodium—and adding that butter to it will only make it worse. Sure, it's delicious, but it's going to set you way back on your nutrition for the week.

Don't worry, though. What you can do instead is find other alternatives to the heavy movie theater popcorn that you can enjoy at home. We've compiled a list here of a bunch of options you can grab at the grocery store and ranked them as far as their nutrition goes. Taking a look at calories, sugar, sodium, and ingredients, we've outlined which popcorn is the best to choose if you want a healthy option. As you go through, you'll notice that the best way to go is with microwave popcorn you can make yourself. Check out the rest of the list and take a look at our collection of 22 Meals to Melt Belly Fat in 2022. 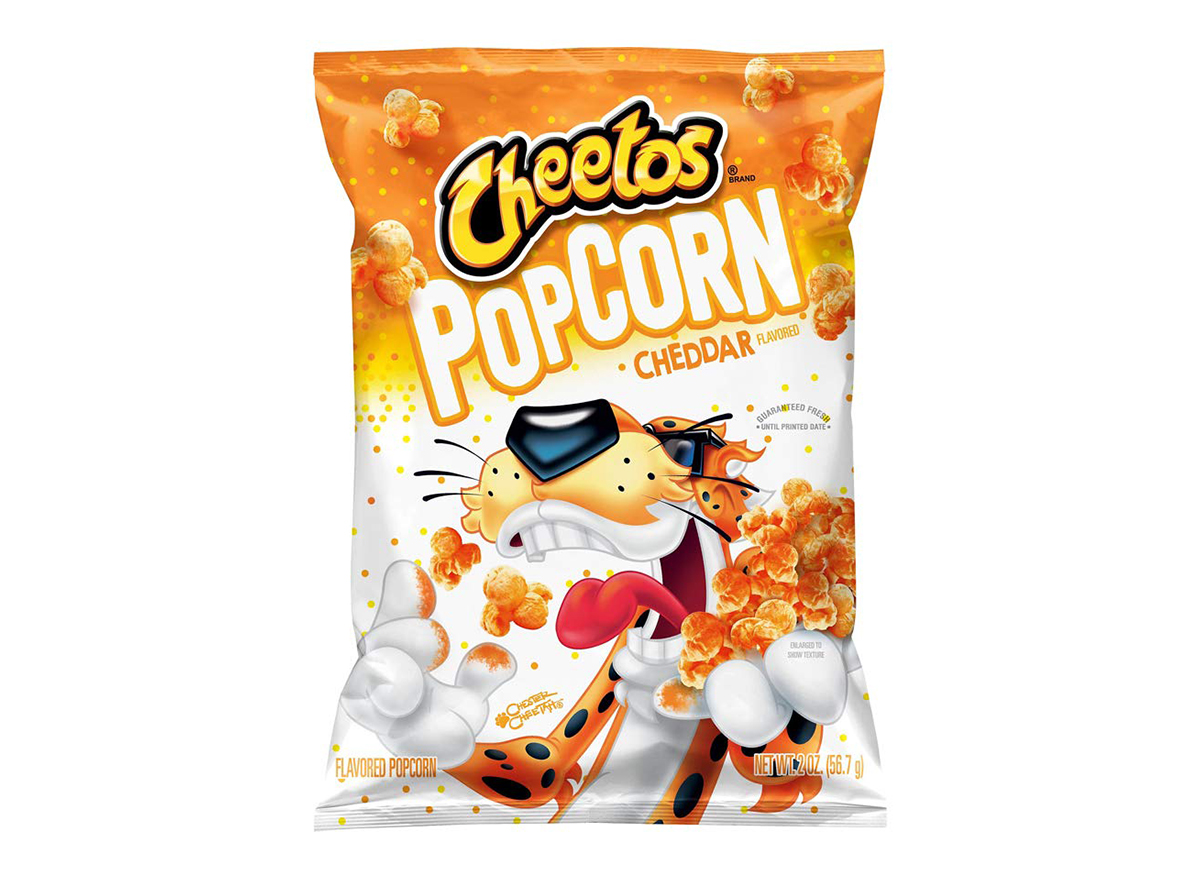 For the cheesiest popcorn experience, Cheetos popcorn is an option. While it's a little higher in sodium than regular popcorn, where you're really running into trouble is with the fat. This is one popcorn that should be saved for a special treat. 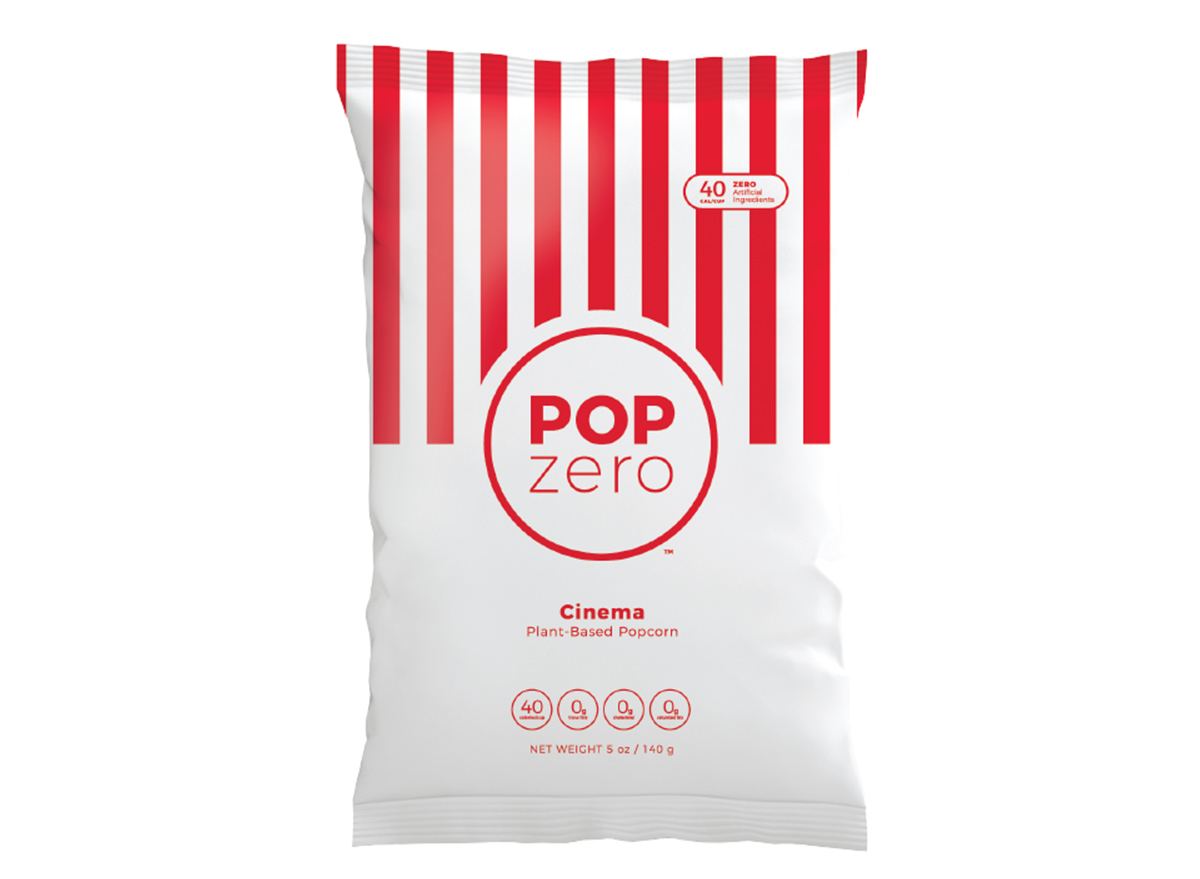 Pop Zero makes a healthier alternative to the popcorn you typically get at the movie theater. Much lower in fat, calories, and carbs, this popcorn is instead a plant-based snack. But while it's a better option, it's still far from the healthiest one out there. 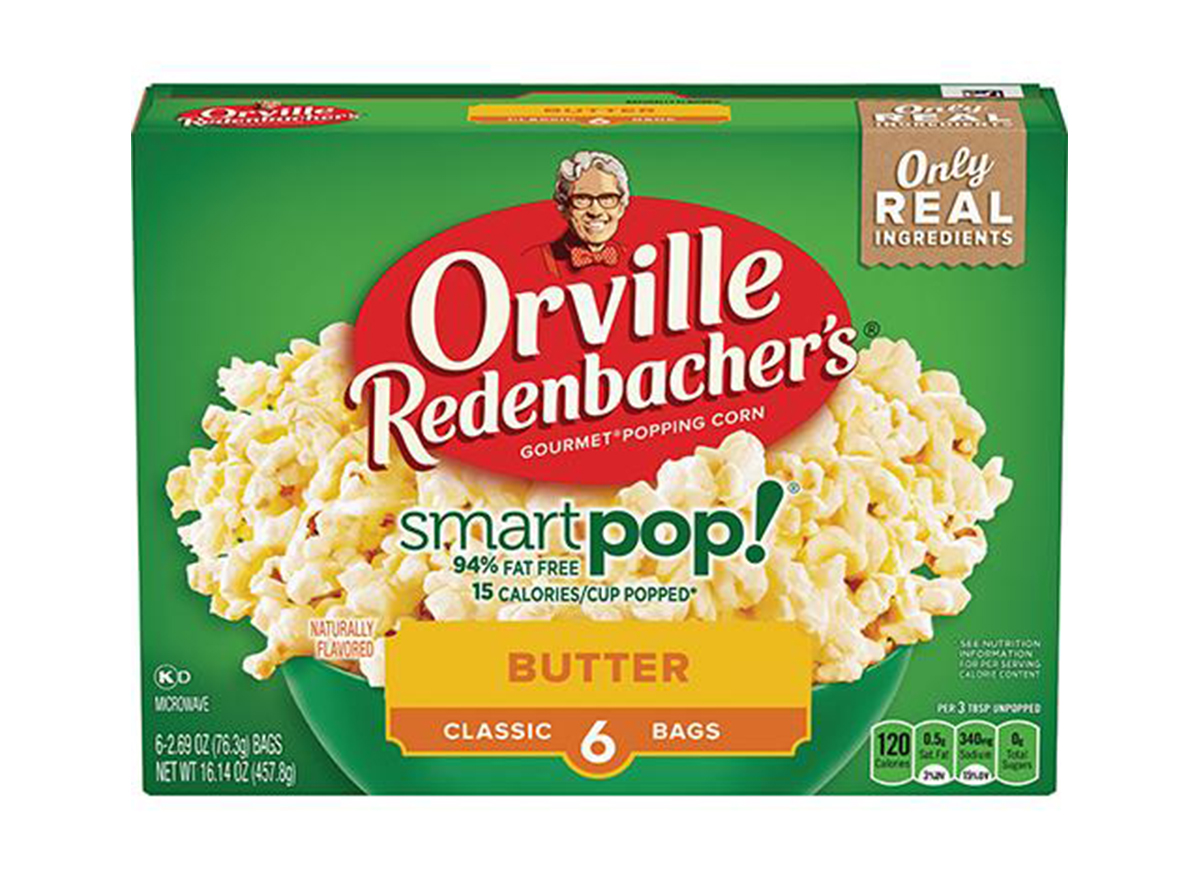 Orville Redenbacher's SmartPop! popcorn packets are the brand's healthier option, however, this popcorn still clocks a good amount of sodium and carbs. But considering the saltier, fattier popcorn options, this one from a classic brand isn't a bad way to go. 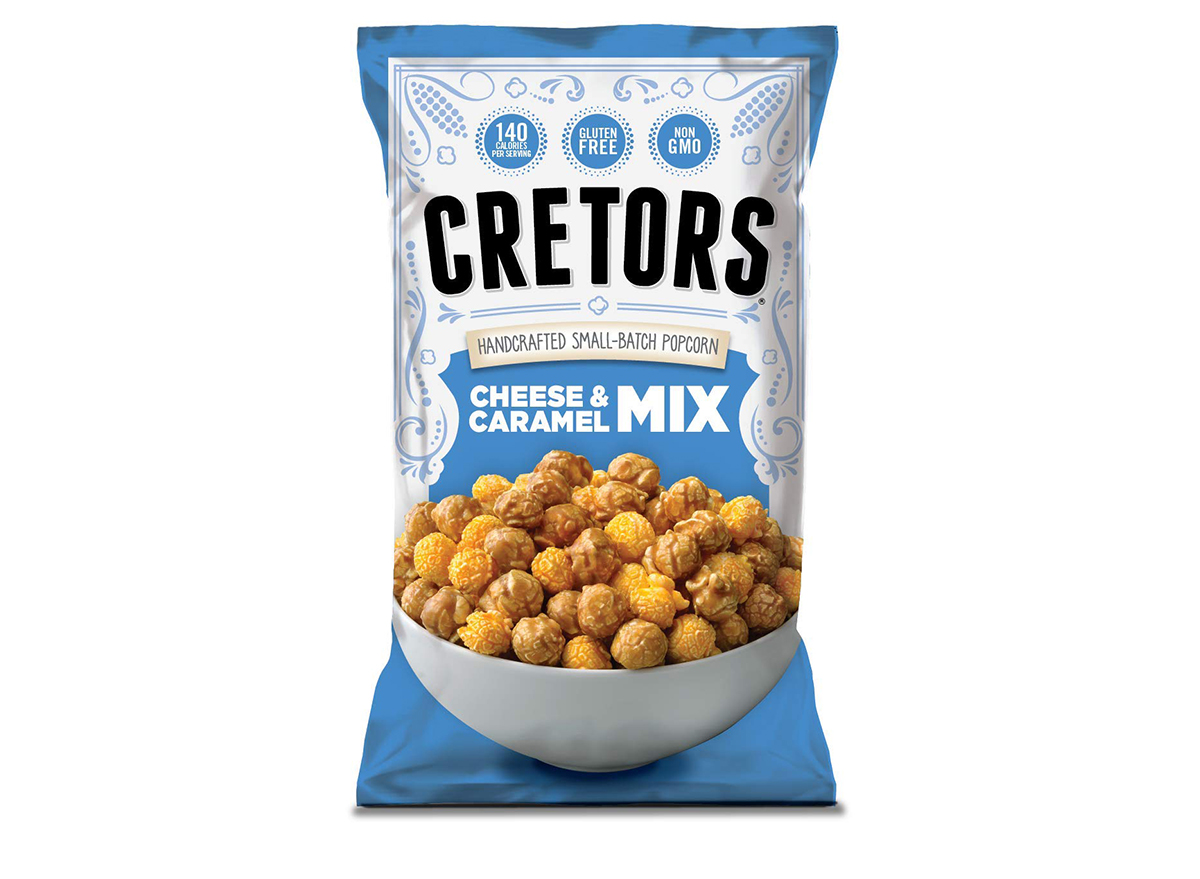 There's no denying the salty-sweet deliciousness of G.H. Cretors Cheese and Caramel Mix popcorn. With the sharp cheddar flavor balanced by the crunchy caramel, you're getting a well-balanced treat that can satisfy all the cravings. What you're also getting, though, is the sugar from the caramel—and it can add up fast. Using a bowl or plate can help keep portion sizes in control.

RELATED: We Tasted 7 Microwave Popcorns & This Is the Best! 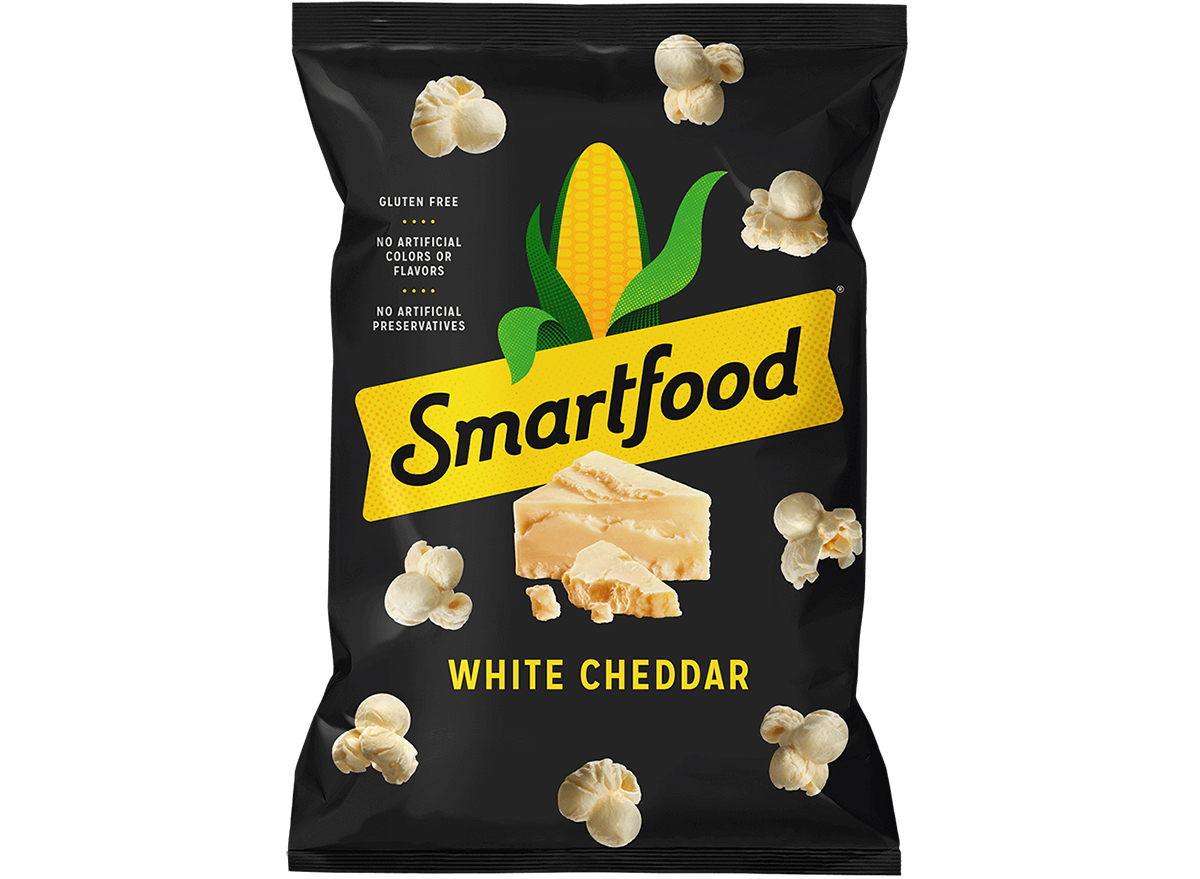 Smartfood lives up to its name. It packs a punch of cheesy flavor without a ton of sodium. Each serving even has 4 grams of protein, which is an added bonus and will help keep you full. 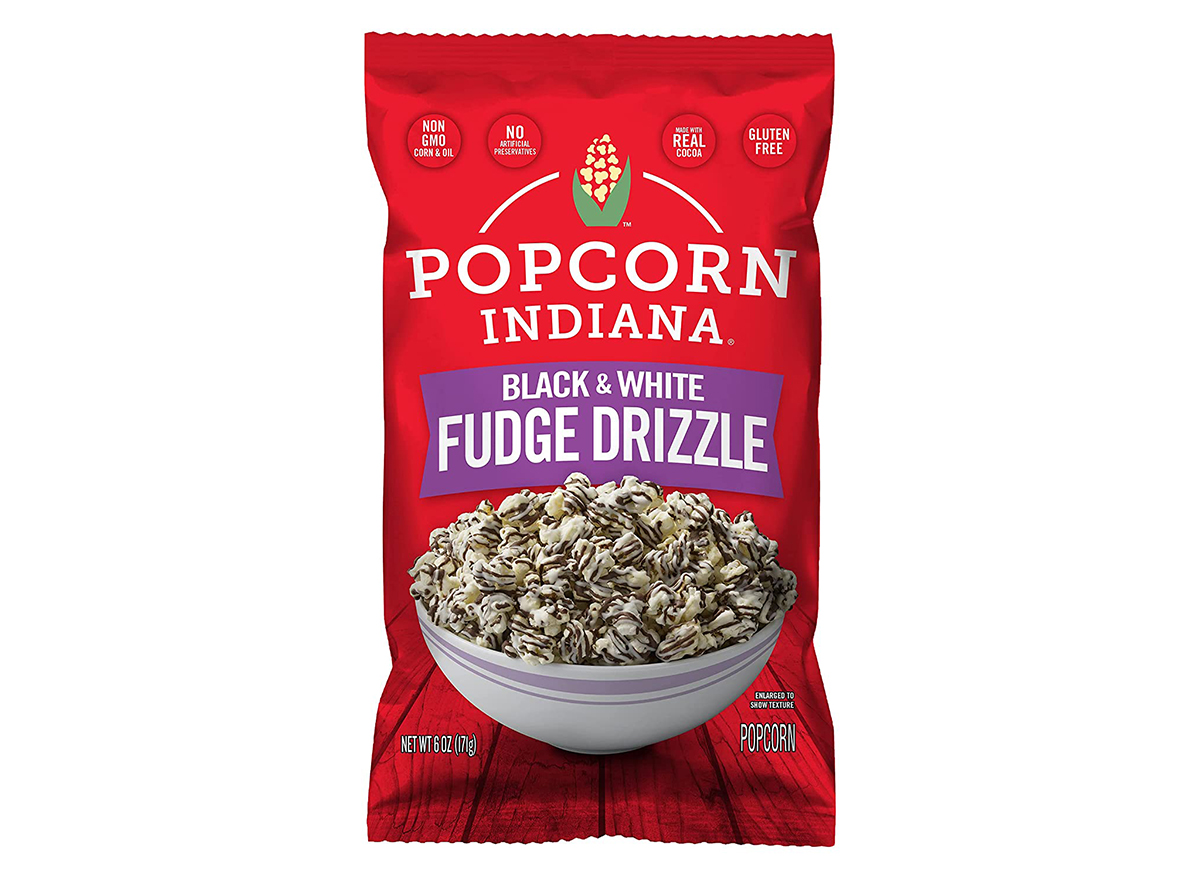 Never again will you have to choose between chocolate and popcorn—and this combo is super sweet. Not only is it kettle corn to begin with, but it's then drizzled in chocolate, as well. It's no wonder it has quite a big of sugar in it, though the calories and sodium aren't bad. 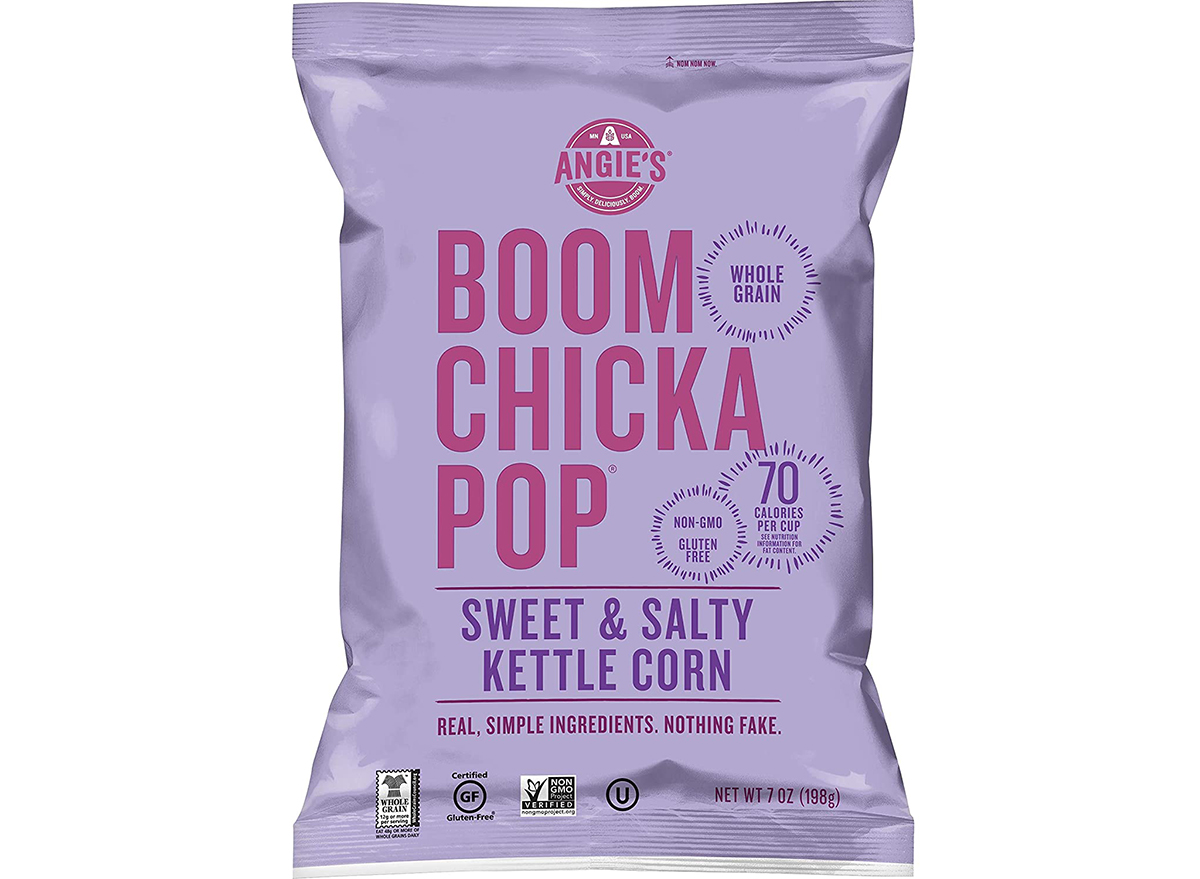 Of course with kettle corn, you're going to have added sugar—it has to get sweet somehow. A serving of this brand contains 8 grams, which isn't terrible if you don't have a lot of other sugar in your day. And actually, with a fairly low calorie count, this makes for a decent sweet snack while watching Netflix. 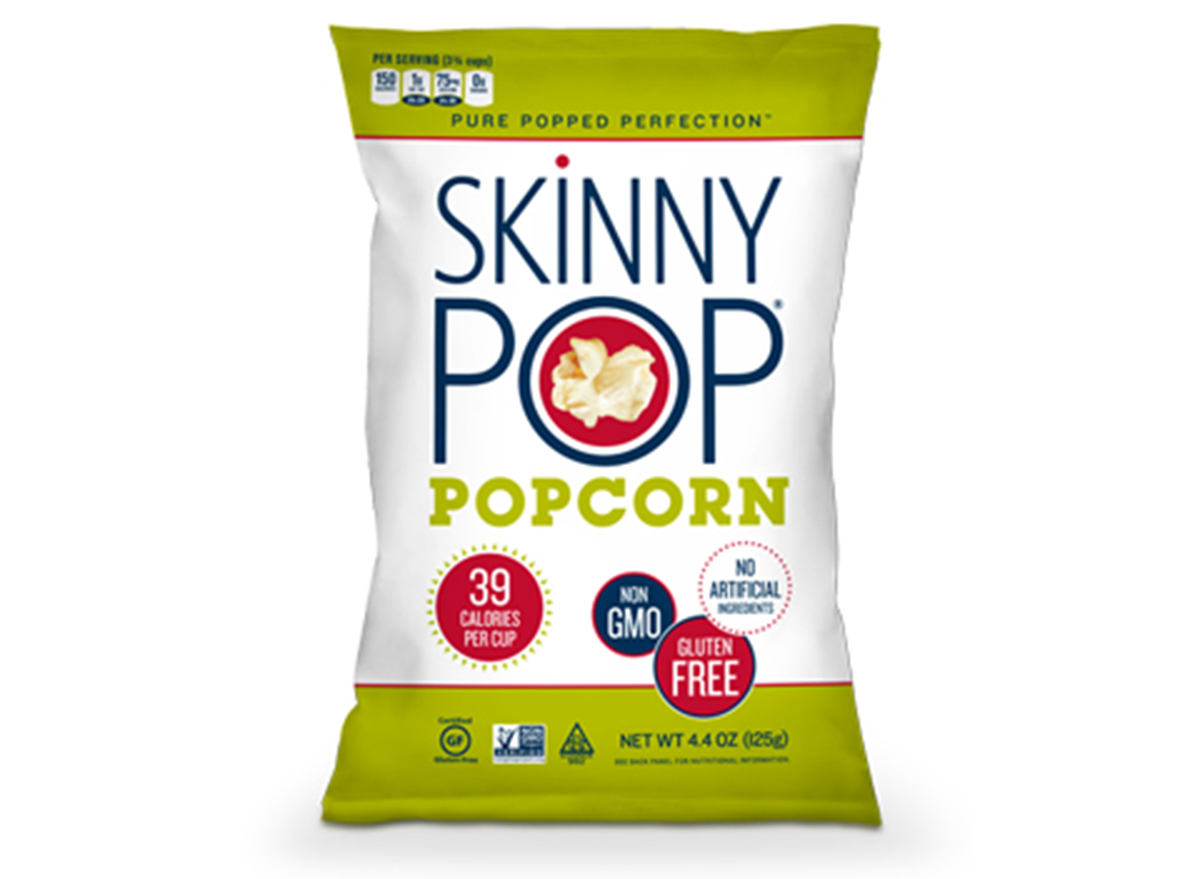 Skinny Pop comes in a few different flavors, but you can't go wrong with the classic popcorn. It's a low-cal snack that's also incredibly low in sodium, making it an excellent healthy choice without tasting bland.

RELATED: The #1 Unhealthiest Way to Prepare Popcorn, According Dietitians 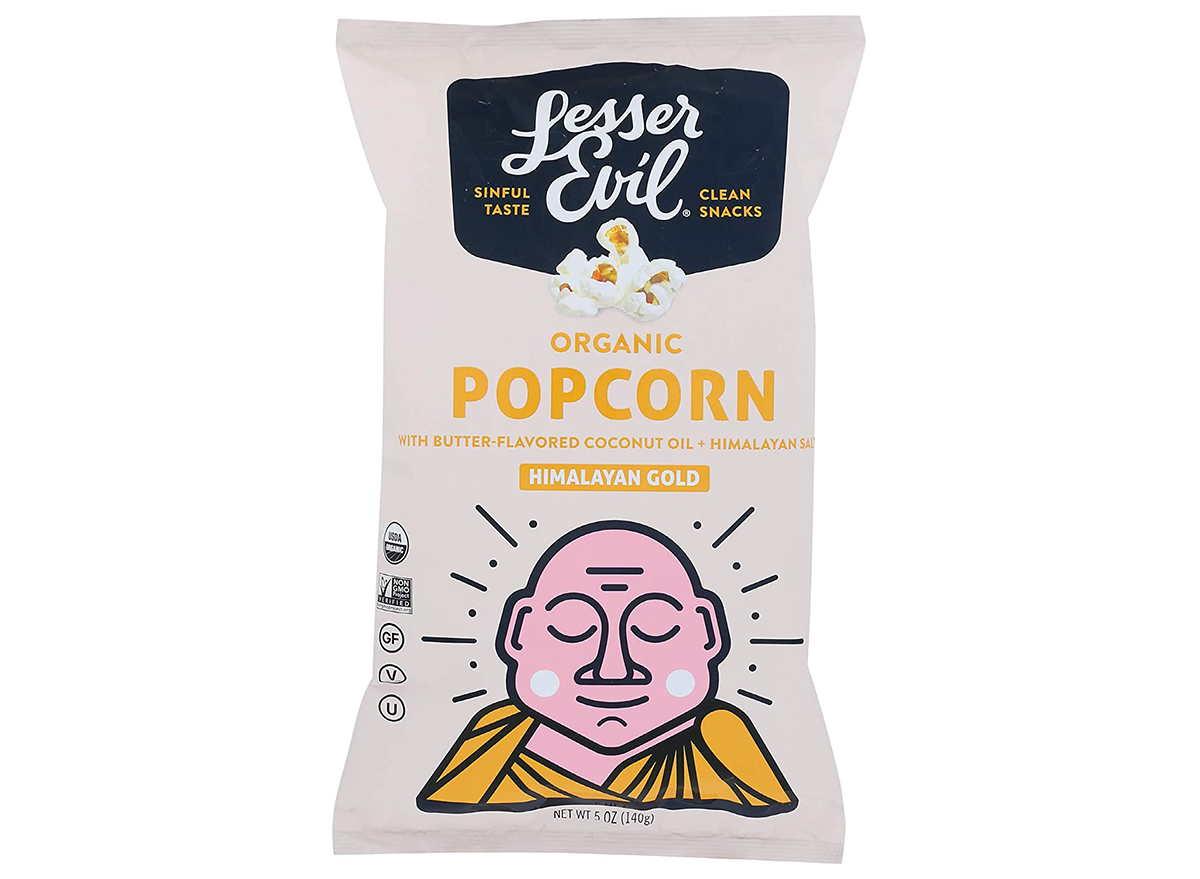 This popcorn is a little lower in calories than some of the other options and is made from organic ingredients. Plus, because it's made from coconut oil, you'll get the faintest hint of coconut flavor! 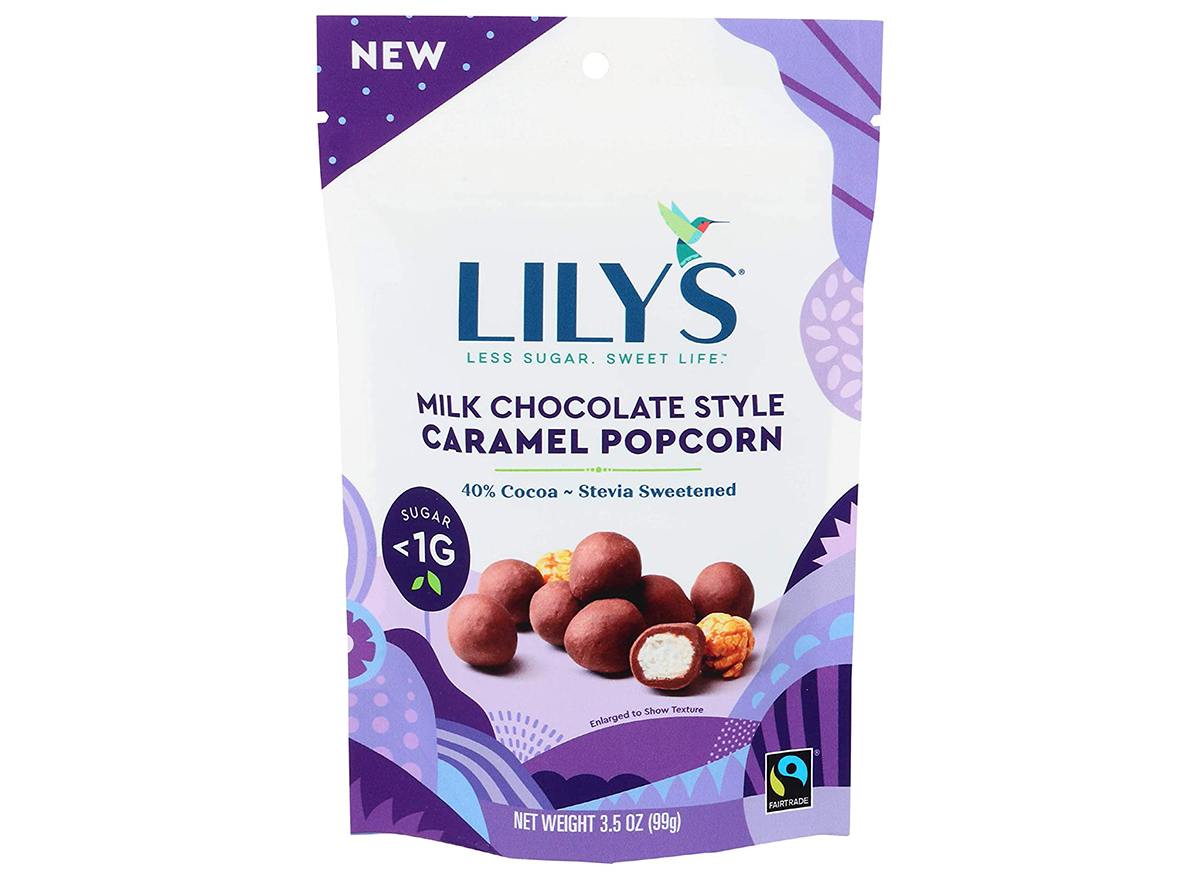 Though you might be inclined to think that this chocolate-covered popcorn is super indulgent, you'd be surprised to know that it's really not! It's sweetened with Stevia, so it's low in sugar, and packs a huge wallop of fiber. If you want a rich popcorn treat, opt for this one. 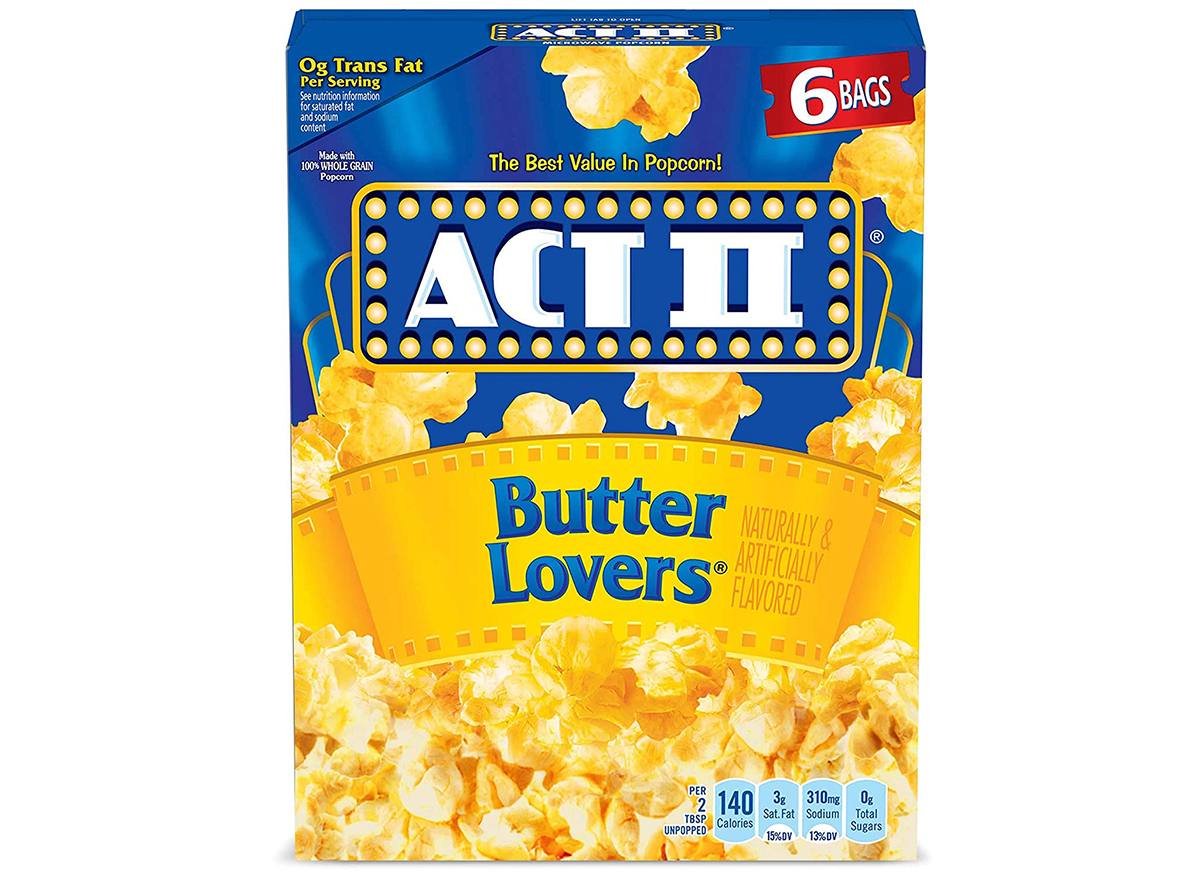 For being a buttery option, this microwave popcorn actually isn't horrible. It's incredibly low in calories and carbs, which makes it a better choice than other prepackaged buttery popcorns.

RELATED: One Major Side Effect of Eating Popcorn, Says Science 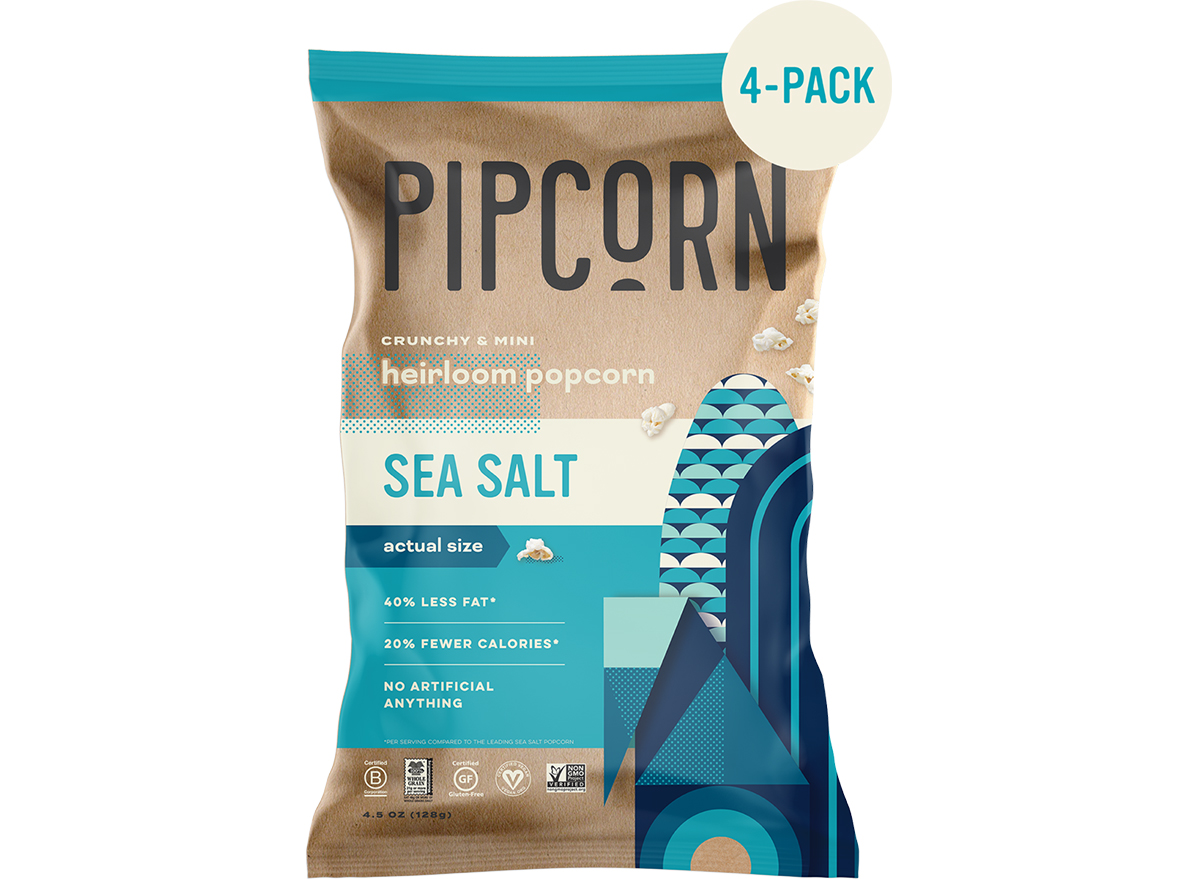 Pipcorn doesn't have anything extra when it comes to ingredients. The carbs and fiber you're getting are natural from the corn itself. The only things added are a bit of oil and salt to pop the corn and flavor it. 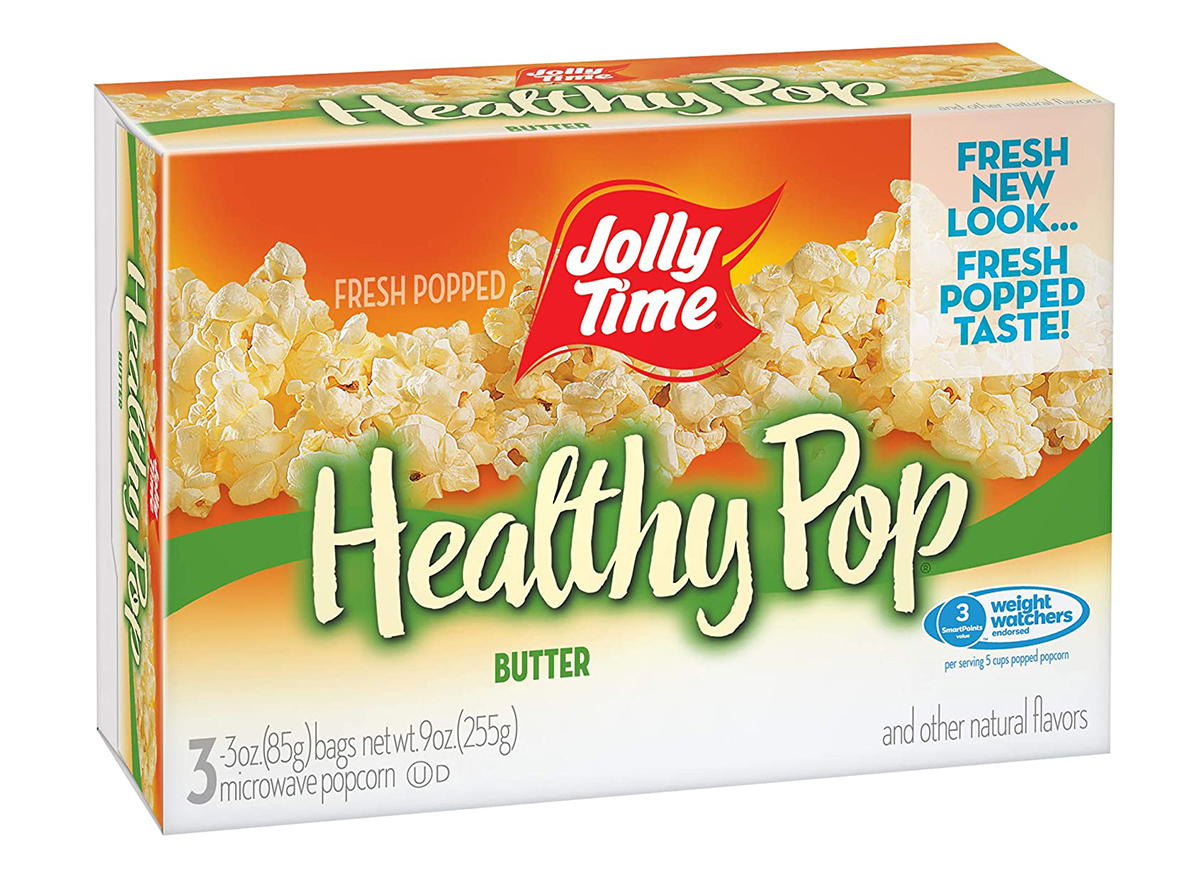 Jolly Time keeps the sodium, sugar, and fat content super low in this healthier popcorn option. Though the ingredients have a few more additives than some other options, this is still a great healthy choice. 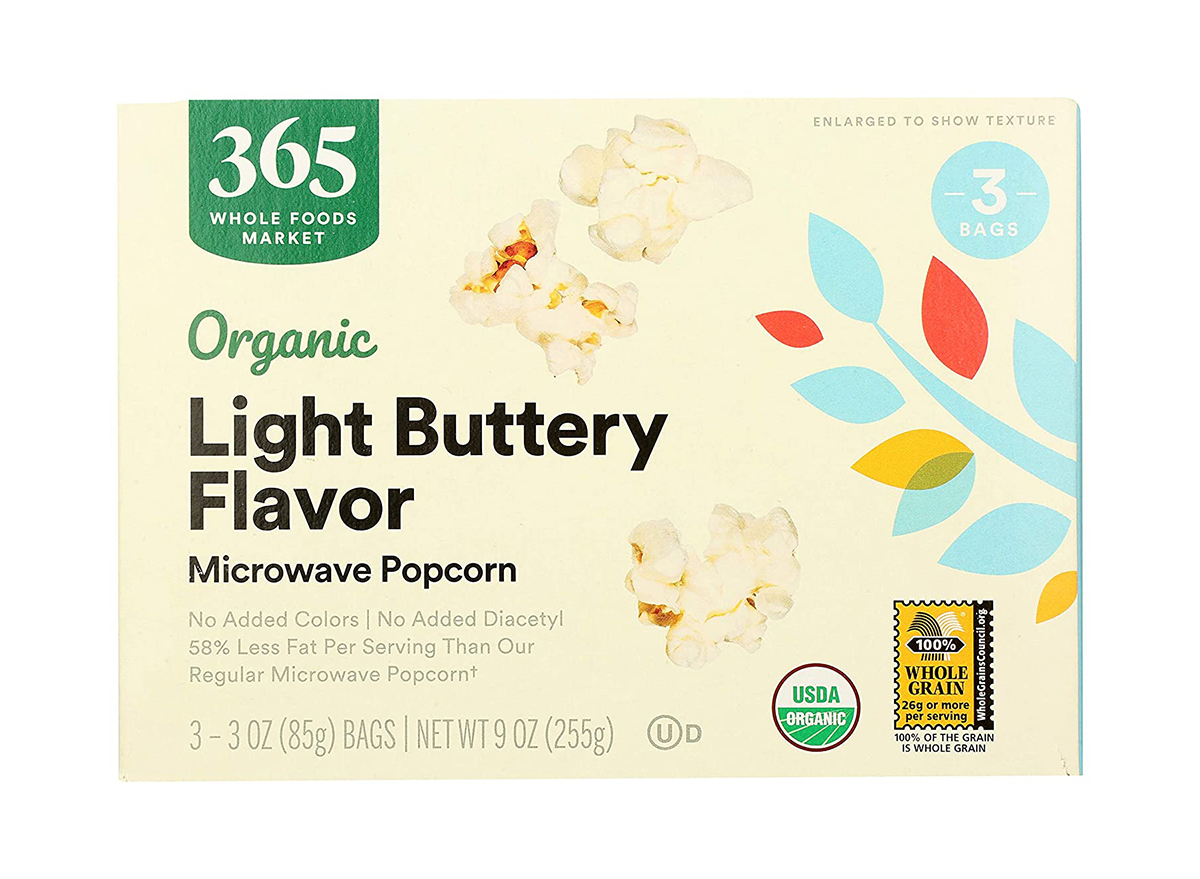 What you'll get with this light popcorn is a filling snack that doesn't have a whole lot to it. It only has a little bit of oil, salt, and flavoring, which keeps all the nutrition content low. If you're looking for a healthy popcorn, this is your winner!

And for more check out: 6 Things You'll See at Costco This Year.