Nationwide Droughts Have Affected These 6 Grocery Items This Year

Droughts have only added to all the issues items have faced in 2021.

It's no secret that your grocery bill has been steadily climbing for the last 11 months. Pandemic-induced supply shortages, shipping delays, and shrinkflation have contributed to rising food prices throughout 2021. But grocery stores and consumers are also facing fallout from the country's drought problem.

More than 83% of California, much like other areas of the country, experienced an "extreme drought" by late October, meaning that the farmland had insufficient water to maintain crops and wildlife, according to MarketWatch. Food costs have been "feeling the production, transportation and labor squeeze" and unfortunately, this means "we're likely to see drought impacts picking up into 2022," agricultural economist Isaac Olvera told the news outlet.

But shoppers have already seen the initial effects of the lack of rainfall on their wallets. And now we have more insight into which of your grocery staples are rising in cost. Here are six items that you'll probably be paying more for in the new year. 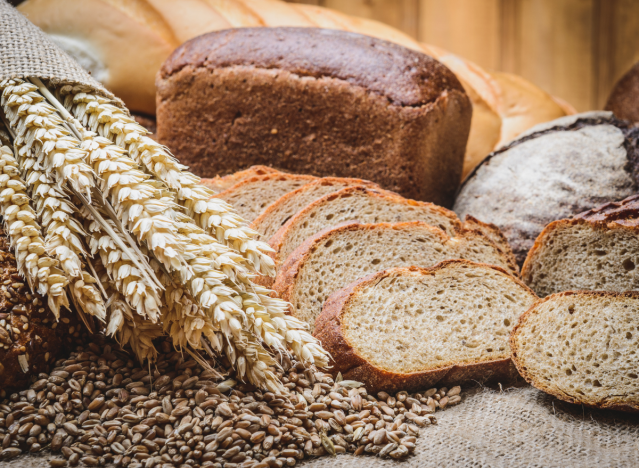 From bread to cereal to pizza, wheat is the foundation of many carb-rich foods. Most of the wheat harvested in America is grown in the Great Plains—which Pan Demetrakakes of Food Processing says got hit hard by a drought this year in a November 2021 update. The lack of rainfall, along with high fertilizer costs and other supplies, has led wheat prices to creep up by 28 to 40%.

In an October report, president of a commodity analysis company Darin Newsom told Barron's, "This year's production of U.S. wheat planted in the spring is expected to be the smallest in a decade due to drought."

Wheat is the main victim, but oats and barley have also been stunted in growth. The price to buy future stocks in wheat rose by 15%, while oats rose by a whopping 80% since January 2021.

What does this mean for shoppers? For now, just be prepared to shell out a bit more for your grain-based must-haves.

America's favorite way to start the morning just jumped up in price. Barron's data shows that futures prices for coffee went up by 59%. Most of the world's coffee supply is grown in Brazil. But this past summer, coffee growers found themselves in a severe and enduring drought.

Will this affect your ability to get your sunrise fix? You won't see prices skyrocket immediately, says CNN, based on the October consumer inflation report. The cost for a cup went up 4.7%, less than the current rate of inflation. Coffee companies stave off the effects of inflation by buying supply in advance, in an effort to stabilize pricing for the consumer.

However, if the low rainfall continues, you may want to budget extra for your morning cup of joe.

Related: To get all the latest grocery store news delivered right to your email inbox every day, sign up for our newsletter!

Low levels of rainfall isn't just a problem because of lack of water, although that's a large part of it. It also means little relief in extreme heat for plants and livestock.

Barron's data shows 10-15% rises in futures for various meat sources, reporting that "hogs and livestock…'typically are stressed and don't eat as well' during drought and heat, so they aren't 'as healthy or meaty compared with a normal season.'"

In September, Slate reported one cattle company owner's thoughts on the issue:

"The long-term effect of this will be less cows producing less calves, and demand is increasing steadily around the world, so prices will begin to rise…We expect 2022 to have much higher prices. It will take years to get the cow herds back to where they were in 2021."

We're already seeing the markup for meat on shelves. If you're priced out of certain cuts at the deli counter, here are some alternatives you could use as a meat substitute.

On the West Coast, California, along with other surrounding states were hit by a "megadrought", according to Gizmodo in August. California agriculture produces a significant portion of the nation's dairy, nuts,  fruits, and vegetables, and agricultural economist Timothy Richards told Gizmodo he expects these prices to increase.6254a4d1642c605c54bf1cab17d50f1e

Almost 80% of the world's almonds come from California, FoodDive reports. Luckily, the almond growing industry is adapting to less water-intensive production methods, even in the face of excessive heat.

Mae Culumber, an expert in nut crops, told the news source, "The industry…has really put a lot of effort into using water resources more efficiently." She explained the water conservation approaches they've adopted to deal with weather variability, including micro-irrigation, a method that works by "delivering small amounts of water only to where and when it is needed."

So if you love snacking on almonds for all of their health benefits, you'll still be able to keep them in your pantry (but maybe with a slight upcharge).

It's easy to see why the demand for avocados has climbed over the past years. The creamy fruit contains healthy fats, improves your fiber intake and heart health, and is rich in nutrients.

Richards informed Gizmodo that the price of avocados is up by 10%. Production for avocados was unideal this season, according to AgAlert at the beginning of November, due to inconsistent weather.

Despite challenges, avocado grove manager Charley Wolk told AgAlert that he expects the 2022 crop to surpass the 2021 total. The major factor to look out for will be the storm patterns of La Niña, which could influence low rainfall in the area.

But for now, it looks like your avocado toast will be safe.

Eating fish is a nutritious way to change up your diet routine for so many reasons. And sushi is a fun way to get a weekly dose of your omega fatty acids. Your favorite spicy salmon roll is made with sushi rice, which comes from California and requires lots of water to grow.

With all the arid weather in California, Mashed said in August that sushi lovers should be prepared for a higher total on their future outings.

For more info about what's happening at the supermarket in your area, read these next:

Sarah Wong
Sarah studied at Northwestern University, where she received a bachelor’s degree in computer science and experimented with mixing tech and journalism. Read more about Sarah
Filed Under
Groceries // Grocery Shopping // News