This Is the Exact Breakfast, Lunch, and Dinner Gold Medalist Caeleb Dressel Eats to Stay Fit

Caeleb Dressel shared the nutrition and workout plans that help him "get better at swimming."

U.S. swimmer Caeleb Dressel stands out for a number of reasons: Already a two-time gold medal winner in relay competitions, he's also the current holder of three world records and a captain of this year's men's team. A lot has also changed for Dressel since the 2016 Olympics, including the major opening that Michael Phelps left on the team now that he's no longer competing.

Dressel is often compared to Phelps, who won 28 medals during his storied Olympic career. He is racing for seven medals this year and trying to keep a level head while staying focused on his matches. "I don't very much care for the spotlight," he recently told NBC Sports.

One thing that Dressel has shared using his platform is a detailed account of his diet and training regimen leading up to the Olympic Games in Tokyo. Read on to learn exactly what this gold medalist eats to stay in gold medal shape. Then, to help get you closer to achieving your own goals, don't miss The Best Supplements For Better Focus, According to Dietitians.

Caeleb Dressel wakes up with a quick, healthy carb.

Last year, before the Olympic Games were postponed due to the pandemic, Dressel told USA Today that before he heads out for morning practice, he tries to eat something that will deliver some energy and take the edge off of his hunger but won't make him feel too full to swim. Examples of these smaller picks include a bagel, toast, or oatmeal.

"I never eat a lot before I get in the water because I don't want to, you know," he said. "Anything with carbs is what I go for if it's not a full meal."

After practice, Caeleb Dressel has a light snack.

When he finishes his first of two swimming sessions for the day—but before he hits the weight room and heads to lunch—Dressel says he grabs a protein bar or some chocolate milk. (Check out which brand of protein bar a celebrity trainer says is the best.) 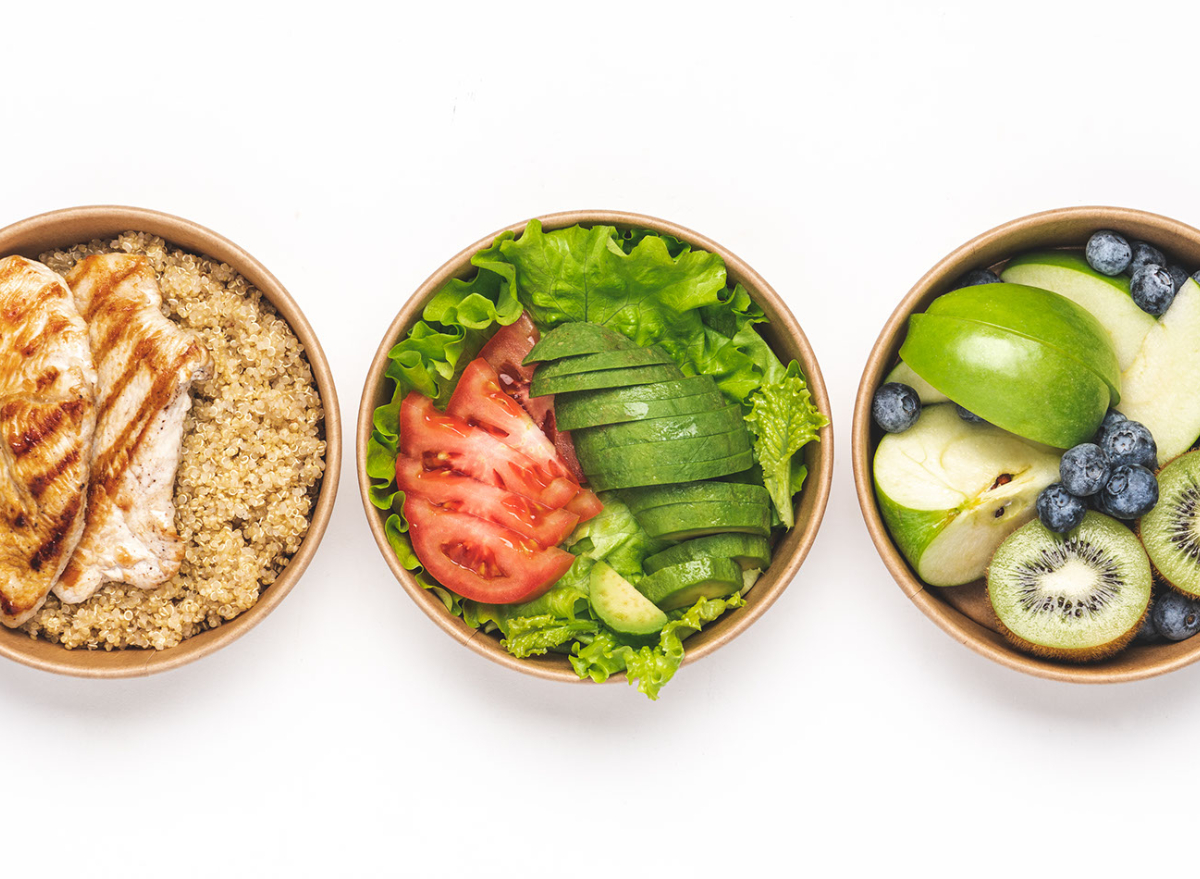 After about two hours of swimming and almost two hours of resistance training, you're probably guessing that this swimmer is hungry. Dressel says he opts for a balanced lunch that includes protein, more healthy carbs, and fruits and veggies. This gets him ready for his afternoon swim practice.

RELATED: We Tried 6 Chopped Salad Kits & This Is the Best

After two more hours of swimming, Dressel is ready to "get food as fast as I can." At that point, he's ready to fill up, possibly with his favorite dinner. "I love meatloaf so much," he said. (If you also love meatloaf, check out our 13 Best Healthy Meatloaf Recipes.)

Though Caeleb Dressel is an athletic phenom, he's more of regular guy than you might think. Lately, Dressel has been posting about his love for Reese's Cups. (FYI: He is a paid partner of the beloved brand.)

Dressel also recently shared this photo with his wife, Meghan, who is also a swimmer. The pair were high school sweethearts. What's for dinner at the Dressel household? Turns out, they're fans of wings.

RELATED: These Are the Best Chicken Wings in Your State

Just a brief scroll through Dressel's Instagram suggests that he's a big fan of the great outdoors. During the COVID-19 lockdown (and shortly before their February 2021 wedding), Dressel and then-fiancée Meghan hiked the Appalachian Trail. It looks like he's also into fishing, as well as Topgolf.

For more food news, check out:

Krissy Gasbarre
Krissy is a senior news editor at <em>Eat This, Not That!</em>, managing morning and weekend news related to nutrition, wellness, restaurants and groceries (with a focus on beverages), and more. Read more
Filed Under
celebrity food // celebrity news // Fitness // News