The #1 Worst Breakfast at Starbucks, Says a Dietitian

An expert reveals the truth about Starbucks' breakfast nutrition. (One item rivals a McDonald's Big Mac.)

Whether you've explicitly noticed it or not, Starbucks has been working overtime in recent years to earn your food business. Today, 50% or more of the menu boards at many of the chain's cafés are occupied by its breakfast offerings (which just so happen to be available all day).

Overall, the selection might appear healthier than the breakfast menus at other chain restaurants. It's Starbucks, and they're tuned into your lifestyle—right? Truth be told, the nutrition facts on some Starbucks breakfast items actually rival the fast-food giants, one diet educator says.

Graham is a registered dietitian and certified diabetes educator in Canada who is also the author of three books on diabetes. Through the lens of her diet wisdom, Graham analyzed the Starbucks breakfast menu for Eat This, Not That! to help you make a healthier choice when your caffeine craving and your appetite roar. Fortunately, they've got a decent range of options to choose from. (RELATED: One Major Effect Coffee Has on Your Immune System, New Study Says)

Healthy Starbucks breakfast choices, according to this registered dietitian.

If you're headed to Starbucks for breakfast, you can find some health-friendly picks among the oatmeal and yogurt selections. "All look quite good," Graham says. Her favorite pick for you? The Berry Trio Parfait, which "has less calories and fat but a good boost of protein at 14 grams."6254a4d1642c605c54bf1cab17d50f1e

RELATED: Sign up for the Eat This, Not That! newsletter for healthy insight delivered to you daily.

"If you are just wanting a fast snack, the Siggi's Yogurt cup has just 110 calories and no fat but is rich in protein," Graham says. (Siggi's was also counted among our recent 40 Best Belly-Shrinking Foods.)

RELATED: One Major Side Effect of Eating Yogurt, Says Dietitian

Graham says Starbucks' Strawberry Overnight Grains might be an OK choice due to the low sodium content, though it also contains considerable fat and calories while not providing much protein.

RELATED: These Are the Best States for Berry Picking

"You can't go wrong with oatmeal," Graham says, "so the Classic Oatmeal or Hearty Blueberry Oatmeal are both good choices nutritionally because of the benefits of the fiber." Another reason she likes Starbucks oatmeal? "Oats also have antioxidants."

RELATED: What Happens To Your Body When You Eat Oatmeal

The #1 worst Starbucks breakfast is… 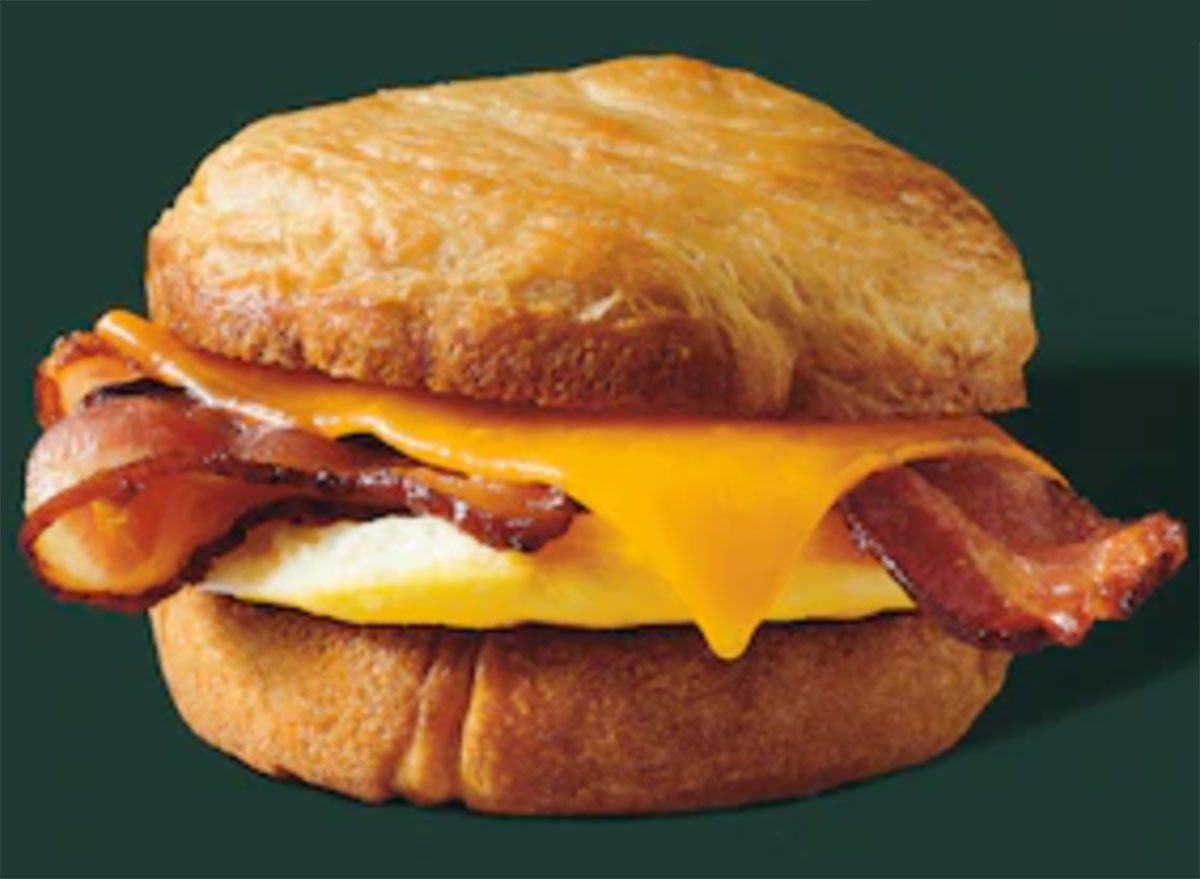 Put simply, the Double-Smoked Bacon, Cheddar, and Egg Sandwich at Starbucks is the #1 worst breakfast item to order there. The 920 milligrams of sodium is 38% of your daily recommended sodium intake, while 28 grams of fat is equal to about six teaspoons of fat. That's "almost as much as a McDonald's Big Mac," Graham says. (Meanwhile, don't miss The #1 Worst Breakfast to Order at McDonald's.)

If you're craving a breakfast sandwich, Graham says the Turkey Bacon, Cheddar, and Egg White Sandwich is a much sounder selection. It has half the calories and significantly less fat, sodium, and carbohydrates than the Double-Smoked Bacon sandwich, plus more fiber.

RELATED: The Wrong Amount of Protein to Eat Every Day, Says Dietitian

Low in fat and calories, Graham calls Starbucks Egg White Bites one of the best nutritional options on Starbucks' hot breakfast menu. (Any of its sous vide egg bites are relatively A-OK.) But they "may not be very satisfying to hold you through the morning." As a result, she'd probably go with the Turkey Bacon, Cheddar, and Egg White Sandwich.

Another Starbucks breakfast item that Graham might recommend for its caloric content and solid protein delivery is the Spinach, Feta, & Egg White Wrap. But keep in mind that "it's got 840 milligrams of sodium and more carbs than the Turkey Bacon," she says.

Krissy Gasbarre
Krissy is a senior news editor at Eat This, Not That!, managing morning and weekend news related to nutrition, wellness, restaurants and groceries (with a focus on beverages), and more. Read more about Krissy
Filed Under
Breakfast // Coffee // Fast Food // News // Restaurant Chains // Restaurants // Starbucks