Going out to eat is always a gamble when it comes to nutrition, so we made it easy to see the best and worst picks.

More than a decade ago, Eat This, Not That! helped create a healthy food revolution. Back then, you couldn't find calorie counts for your favorite restaurant orders. As for menu items that were designated vegan or gluten-free? Nowhere to be found. It wasn't until we exposed dietary disasters for what they were that we started to see major changes.

Now, restaurants post nutritional information on menus and online, and it's not uncommon to find a designated section of the menu highlighting items under 600 calories. Now when consumer watchdogs call out menu items for being too high in sodium or sugar, restaurants reformulate to make those dishes healthier.

While we may be more health-conscious now, there's still confusion about what's actually healthy, so Eat This, Not That! is back to do it all again. 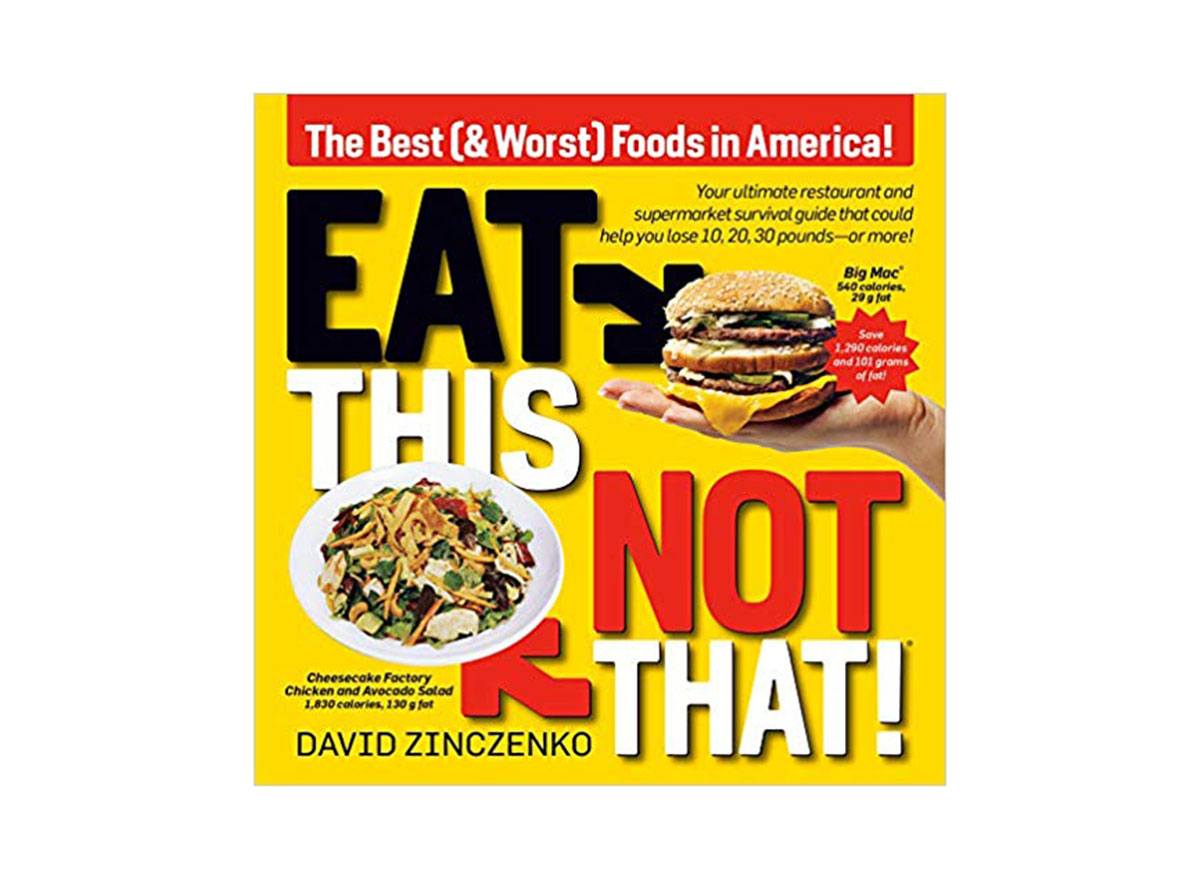 In our brand-new book Eat This, Not That!: The Best (& Worst) Foods in America!, we reveal thousands of popular and seemingly healthy foods that have shocking amounts of fat, sugar, salt, and calories—often more than a day's worth! But if you know what to choose in every situation, you can still lose 10, 20, or 30 pounds (or more!) without dieting and while still eating your favorite foods.

We've listed some of the smartest swaps here. We hand-picked the most shocking orders at your favorite chain restaurants for every meal of the day—from breakfast to dessert—and what you can order instead. Most people don't know that a 300-calorie savings each day results in more than a half-pound loss in just one week. Making these swaps is a simple way to cut calories while still enjoying a meal out.

INSANE EQUIVALENT: As many calories as 9 Krispy Kreme Glazed Donuts

If you want to eat a cinnamon roll for breakfast, just do that. Before you say we're crazy, get this: ordering this cinnamon roll-inspired breakfast from Denny's isn't just as bad as eating a Cinnabon cinnamon roll—it's three times as bad. And that only covers the sugar.

With the additional sides of eggs, hash browns, and bacon, you're also looking at taking down as much sodium as a Family-size bag of pretzels and as much fat as 6 cookies shy of an entire 14.3-ounce pack of Oreo cookies.

If you still want a little taste of everything (because—really—who doesn't?) then your best bet is to opt for Denny's Build Your Own Grand Slam and build it with two hearty wheat pancakes, two turkey bacon strips, two eggs cooked over easy, and seasonal fruit. This plate delivers sweet, salty, and savory all in one meal without blowing up your calorie count. You'll save 165 grams of sugar by opting for this order over the Cinnamon Roll Pancake Breakfast.

We get it, that creamy bowl of pasta is calling your name at Cheesecake Factory, but let's take a step back and consider just what goes into this bowl of carbs. We're not just talking about the butter and cream in the alfredo sauce. We're talking about how polishing off this plate of pasta at the Cheesecake Factory is just like ordering 3 McDonald's Big Macs.

Instead, go for the gluten-free soft chicken tacos. (In fact, you could fire in three orders of this healthy dish and still not consume the same number of calories, fat, saturated fat, and sodium as the pasta dish). You'll get a good source of protein and—best of all—a serving of vegetables.

INSANE EQUIVALENT: As much fat as 133 Chick-fil-A Nuggets and as much saturated fat as 11 slices of Dominos Hand-Tossed Pizza With Regular Cheese—that's the equivalent of a pie and a half!

When hunting for healthy appetizers in the Outback, head to the sea rather than the fields. If you absolutely must have a fried appetizer, the Coconut Shrimp is a great alternative to the gargantuan Bloomin' Onion. You'll still get that crispy, greasy fix without exceeding your whole day's worth of calories, fat, and sodium.

By making this appetizer swap, you're only consuming a sixth of the sodium and a tenth of the fat compared to the Bloomin Onion.

INSANE EQUIVALENT: As much sodium as 15 single-serve bags of Rold Gold Pretzels

If you're looking for an Asian-inspired meal at TGI Fridays, swim up river and grab the salmon instead of the shrimp noodles.

YOU SAVE: 620 calories. Make this swap twice a month and you'll lose 4 pounds in a year.

Even though the Salmon is still 900 calories, there are added benefits to choosing this meal. Salmon is one of the top sources of anti-inflammatory omega-3 fatty acids in your diet: a heart-protective type of fat that most of us don't get enough of. Plus, making this swap will save you the sodium equivalent of 10 bags of pretzels.

INSANE EQUIVALENT: As much sugar as in an entire carton of Breyers Chocolate Ice Cream—12 whole scoops!

YOU SAVE: 900 calories. Make this swap twice a month and you'll lose 5 pounds in a year.

For perspective, the Vietnamese Chocolate Lava Cake, which contains 70 grams of sugar, is still 120 grams less than the Great Wall of Chocolate (and more than half the calories). Making this swap will save you the sugar equivalent of 2 McDonald's Oreo McFlurries.

To see these foods in action (and their wild equivalents!), here's our segment showing these swaps on the Today show.