Hard to believe, but these questionable food products used to be all the rage.

It's a well-known fact that our sense of taste evolves as we get older. But, what's interesting is, a similar parallel can be seen within our food history. Food items and dishes which were once all the rage slowly start to lose their luster as new trends and diets arise. Then, one day, we find ourselves looking back and thinking, "I can't believe we used to eat that."

Read on for a touch of nostalgia, but also disgust, as we highlight a few of these questionable food products which once had a major hold on Americans.

RELATED: 8 Once-Largest Grocery Chains That Have All Disappeared

The idea of shaking a tube of bread out of a can just like cranberry sauce may give us the willies now, but it was once a very popular grocery item. The product, made by B&M, was introduced in the late 1920s and consisted of whole wheat, flour, cornmeal, and molasses. These ingredients were steam-cooked and the bread rose directly in the can. The main advantage it had over normal, fresh bread was its extended shelf life—something that made it an excellent alternative during the uncertain times of the Great Depression and World War II.

The youth of the 2000s went crazy for these unnatural rainbow shades of Heinz Ketchup. And at first, parents didn't object. Hey, if dumping green ketchup over everything was the only way to get your kid to eat anything substantial, then more power to you! At one time, hues of green, purple, blue, pink, orange and teal ketchup were all available. But, the product was eventually discontinued in 2006 as parents started to realize that maybe all those artificial flavors aren't good for you.6254a4d1642c605c54bf1cab17d50f1e

Vienna sausage was a household staple in America from the 1940s to 1970s. These parboiled sausages are similar in look to a standard hot dog and are made up of chicken, pork, and/or beef. But, they exhibit one key difference: they come in a can. This means the sausages sit in a bath of some form of broth or gelatin until you crack 'em open to enjoy any way you please. One common consumption method was to eat the slimy franks right out of the can—no cooking required!

These are two kinds of cheese you won't find on today's charcuterie board—maybe because they aren't real cheese. But, this wasn't always a deterrent. At one time, Americans couldn't get enough of these cheeses of the future. Creamy Cheez Whiz from Kraft Foods was spread on anything and everything from hot dogs and hamburgers to vegetables and casseroles. Close cousin to Cheez Whiz, Easy Cheese from Mondelēz International, was also a big hit due to its ability to be squeezed out from a pressurized can. 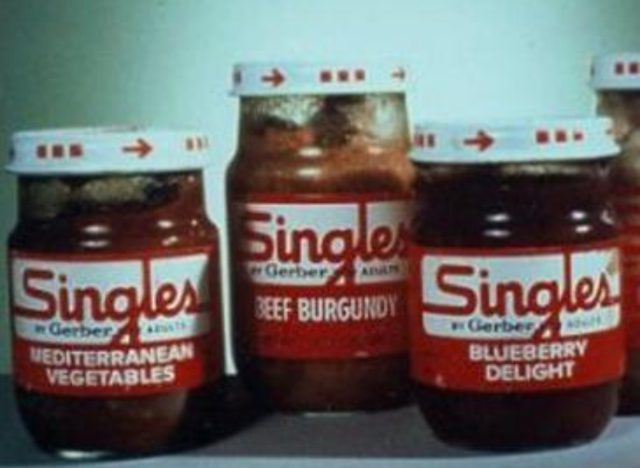 Baby food for adults? Yes, as weird as it sounds, Gerber did test out this concept back in the 70s. The company filled its glass jars with flavors like Ham Casserole, Beef Burgundy, and Chicken Madeira in hopes that single adults and college students would fancy the convenience of the product. Unfortunately, the brand's messaging didn't stick. (One of the pitches was quite literally, "Eat this when you're alone.") Either that or people didn't like the idea of meat crammed into a glass jar.

People were living on dreams and SpaghettiOs (thanks, Martina McBride) when Campbell's first introduced the canned pasta back in the '60s. It was known as the "world's first spoonable spaghetti" and parents quickly fell in love with its neatness and simplicity in making–just slop it into a microwave-safe bowl or into a pot and you're good to go! The delicacy has since been put on the back burner as other options like Buitoni and Bertolli quick pasta meals have gained popularity. Uh-oh, SpaghettiOs!

Oscar Mayer's Sandwich Spread was essentially a meat tube filled with bologna, sweet pickles, mayonnaise, dried red bell peppers, and more unsavory ingredients. In its heyday, shoppers could typically find it sandwiched between the hot dogs and various deli meats at the grocery store. Oddly, people began to lose their appetite for it, and the sandwich spread was discontinued in 2009.

What was the obsession with meat spreads throughout America's food history? Advertised as a great go-to meat or snack, this one made by Underwood follows the same idea as Oscar Mayer's Sandwich Spread, but with a different twist on flavors and ingredients. Underwood spreads are also still very much available for purchase now, in case you're interested. The Deviled Ham variety specifically includes ham mixed with mustard flour, spices, and turmeric. Or, you could venture into the brand's other meat variations including White Meat Chicken, Premium Roast Beef, Corned Beef, or Liverwurst—we'll pass on that last one for sure.

Can you believe these were once marketed to children? Candy cigarettes first hit store shelves around the 1930s and were made from some sort of chalky sugar, molded perfectly into the shape of a cigarette. A few brands even took it a step further by adding powdered sugar to the packaging that you could blow out creating a fake cloud of smoke.

People rightfully began to question the ethicality of the product. One study from Pediatrics even found that children who ate candy cigarettes were twice as likely to take up smoking later in life compared to those who didn't—holy smokes! Some candy cigarettes continue to be manufactured in the United States, but are banned across many other countries.

Ah, to return to the days when parents would come home after a long day of work and the whole family would sit down to a meal of Swanson packaged dinners served on TV trays. This was a common scene starting in the 1950s when the frozen meals used to sell for under $1 and came in a variety of options including Salisbury Steak, Fried Chicken, and Meatloaf. As people started to pay more attention to their health and the foods going into their bodies, Swanson's dinners—which were jam-packed with excess sodium and fat—started to fall off the map. Now, the famous TV dinners have been replaced by healthier brands like Lean Cuisine, Health Choice, and Kashi.

You've heard of the now-popular mug cakes, but what about Mug-O-Lunch? This Betty Crocker creation walked so that today's Kraft Macaroni & Cheese Cups could run. Introduced in the 1970s, Mug-O-Lunch was advertised as a meal you can make in five minutes just by adding the mix and hot water to a coffee mug. Flavors included Spaghetti & Sauce, Beef Noodles & Gravy, and everyone's favorite, Macaroni & Cheese—although we've heard through the grapevine that all three left much to be desired.

Back in the day, Americans had a bad habit of suspending various foods in Jell-O or gelatin. Jell-O fruit cake used to make for a crowd-favorite dessert and aspic—a meat jelly made from broth and filled with various meats, vegetables, or even eggs—was a food relic of the 1950s. Lucky for us, these dishes have wiggled their way off of our typical household menus and now we can just enjoy our beloved Snack Packs sans the unwanted floaters.

Another case of adding random foods where they don't belong. Fruit cake—a cake filled with fruit, nuts and various spices—was considered to be a celebratory treat, often present at Christmas, birthdays or even weddings. The kicker to this dessert, though, is that it was considered to become tastier over time, which is also why people would soak the cakes in liquor in order to preserve them for longer. We'll stick to freshly baked cakes, please and thank you.

My bologna has a first name, it's…? We can't even remember the end of the jingle, it's been so long since it relentlessly played over and over in our heads. Bologna was once America's favorite lunch meat, as both an affordable and accessible option, and became even more popularized in the '60s and '70s, courtesy of Oscar Mayer. While some consumers still enjoy a nice fried bologna sandwich from time to time, the product has also been blacklisted by many. Now, turkey and ham are more commonly found squished between two slices of bread across the country.