Trim your gut fast with these flat belly secrets!

If you're anything like me, you likely want to lose weight and get a flatter stomach to make your pants feel looser and boost your confidence in a bathing suit. But there are additional benefits: Studies have found that losing belly fat can also decrease the risk of high blood pressure, diabetes, and stroke!

There's only one problem: It's not so clear what the most effective ways to whittle your middle are. There's a seemingly endless amount of rumors and misinformation out there. In fact, if you were to Google "how to get a flat stomach," you'd get over 13.6 million results, each of which would contain at least a dozen or so tips—that's a whole lot of information! To help you cut through the noise—and the flubber—we've curated the most up-to-date, definitive guide to scoring that toned stomach you've always wanted, compliments of the Zero Belly Diet book. Follow these 21 tips and learn how to lose belly fat fast plus get that flat stomach—today!

For more healthy eating tips, make sure to check out our list of 21 Best Healthy Cooking Hacks of All Time.

Even if you eat well and exercise, stressing out can prevent your stomach from deflating. Why? Stress increases levels of the hormone cortisol, which increases appetite and fat storage—not what you want when you're looking to get six-pack abs. Next time your stress levels go through the roof, brew a pot of black tea. Research has found that the beverage can increase the rate at which your body brings its cortisol levels back to normal, helping you slim down. Here are 15 Easy Ways to Lower Cortisol Levels so You Don't Feel as Stressed.

Having good posture can help you look slimmer in seconds. Plus, it can also strengthen your stomach muscles, giving you that long, lean look you crave. Whether you're sitting, standing, or walking, be sure you're staying as upright as possible.

Rise and shine, sleeping beauty! You're already a stunner–you don't need extra beauty sleep–and the extra hours can make it difficult to get rid of that fat belly. According to researchers, late sleepers—those who wake up around 10:45 a.m.—consume 248 more calories a day, half as many fruits and vegetables and twice the amount fast food than those who set their alarm earlier. If these findings sound troubling but you're so not a morning person, set your alarm clock 15 minutes earlier each day until you're getting out of bed at a more reasonable hour

Cut back on veggies like broccoli, cauliflower, and Brussels sprouts that cause bellies to balloon, and add some bloat-busting produce to your diet. Honeydew melon has a diuretic property that fights water retention, and pineapples and papayas contain enzymes that aid digestion and break down proteins that typically cause bloat. And if you're looking to decrease the bloat fast, here are 24 Ways to Get Rid of Bloating in Less Than 24 Hours.

Not only does chewing gum cause you to swallow tummy-bloating air, many gums also contain sugar alcohols and artificial sweeteners like sorbitol and xylitol that can cause bloat. Skip the gum altogether or opt for an organic variety like Glee gum or Simply gum instead. They're still low-cal, but they don't use sweeteners that'll make you puff up.

This smoothie-like drink contains lactase–an enzyme that breaks down lactose, the sugar in milk that causes stomach issues for some people. Ohio State University researchers found that drinking kefir can reduce bloating and gas brought on by lactose consumption by a whopping 70 percent! We like Lifeway's Veggie Kefir line. Each bottle has 110 calories, 15 grams of sugar, and a full serving of veggies.

Instead of eating whenever your stomach starts to rumble, reduce your "eating window" to eight to twelve hours. According to a recent Cell Metabolism study, this tactic may boost your body's ability to burn fat as energy—even if you don't cut back on calories! While the research was done on mice, we think the study findings are quite promising.

The amino acid arginine–found in walnuts, almonds, Brazil nuts, brown rice, and chicken–is a powerful flab-fryer! A 2014 Journal of Dietary Supplements study found that consuming nine grams of arginine a day can help reduce belly fat and weight in obese individuals. Since the foods that are rich in the nutrient are also nutritional champs, there's no reason not to hop on the bandwagon.

Dress up your veggies.

While some dressings are dietary demons loaded with sugars and weird fillers, dressing your veggies in an apple cider vinegar-based concoction can help your abs pop. After consuming a tablespoon or two of vinegar daily (about what you'd use to dress a bed of greens) for eight weeks, obese study participants were leaner and had less visceral fat than those who didn't consume the vinegar. How does it work? According to Japanese researchers, ACV produces proteins inside the body that burn fat. Add some to your salad with olive oil and spices for a sweet and tangy topping. Here's What Happens to Your Body When You Drink Apple Cider Vinegar

Muster up the mustard.

Eating 1 teaspoon of mustard–for a mere 5 calories–can increase metabolism by up to 25 percent for several hours, according to researchers at England's Oxford Polytechnic Institute. Smear some of the spread onto turkey sandwiches, burgers, and hot dogs, brush some onto a fish fillet before baking or use it as a meat marinade. Since eating protein can boost your calorie burn too, combining them is a fat-frying double whammy!

Beans and legumes are not only rich in fiber, they're also a good source of something called resistant starch–which, as the name implies, helps the musical fruit "resist" digestion. In order to combat this, the body has to use extra energy to break them down. Some research has found that resistant starch can promote fat oxidation and increase your calorie-burning power by up to 24 percent over the course of the day! Other research notes that this type of starch can increase fat oxidation and decrease long-term fat accumulation. Not a fan of beans? Cook up some pasta, pop it in the refrigerator and eat it cold. When you cool down noodles, the drop in temperature changes their chemical structure to include resistant starch. Plus, did you know black beans are The #1 Best Carb To Eat If You're Trying to Lose Weight?

Pile on the peppers.

You may have already heard that capsaicin, the compound that gives chili peppers their fire, can increase energy expenditure and fat oxidation, but recent research has found that even mild peppers can have similar effects. This is great news for those who can't stand anything too spicy! To reap the metabolism-boosting benefits, add sliced poblano, banana, or sweet peppers to omelets, sandwiches, salads, and sautés.

Speaking of the metabolism, you're going to love these 29+ Healthy Metabolism-Boosting Recipes for Weight Loss.

In one study upbeat music kept research participants running 15 percent longer and helped them feel more positive about their workout—even as they neared exhaustion. Trying to increase your speed? Listen to songs with fast tempos. You'll unconsciously try to keep up with the pace of the song, making you move your feet a bit faster.

Side plank your way skinny.

Sure, regular planks are better for your core than traditional sit-ups, but side planks are even more challenging. When you perform a plank on your forearms, your body has four points of contact with the floor. Planking on your side forces you to support your entire body on just two points, making it harder to stay stabilized. A harder exercise equals harder abs.6254a4d1642c605c54bf1cab17d50f1e

Banging out some bis, tris, and quads before hitting the treadmill or track may be just the thing that makes your abs pop. Since weight training is bound to wear you out, your cardio workout will be all the more challenging–and effective. Mentally cuss us out all you want as you sprint on the track, the extra sweat will benefit your abs in the long run. You can thank us later. Just make sure to avoid these 15 Exercise Mistakes That Are Ruining Your Workout.

If you're tempted to indulge in diet no-nos, call someone you love—a friend, significant other or one of your parents. Researchers say the sound of a loved one's voice can trigger the release of the hormone oxytocin, which is naturally released during times of bonding–even over the phone–and also helps suppress appetite. 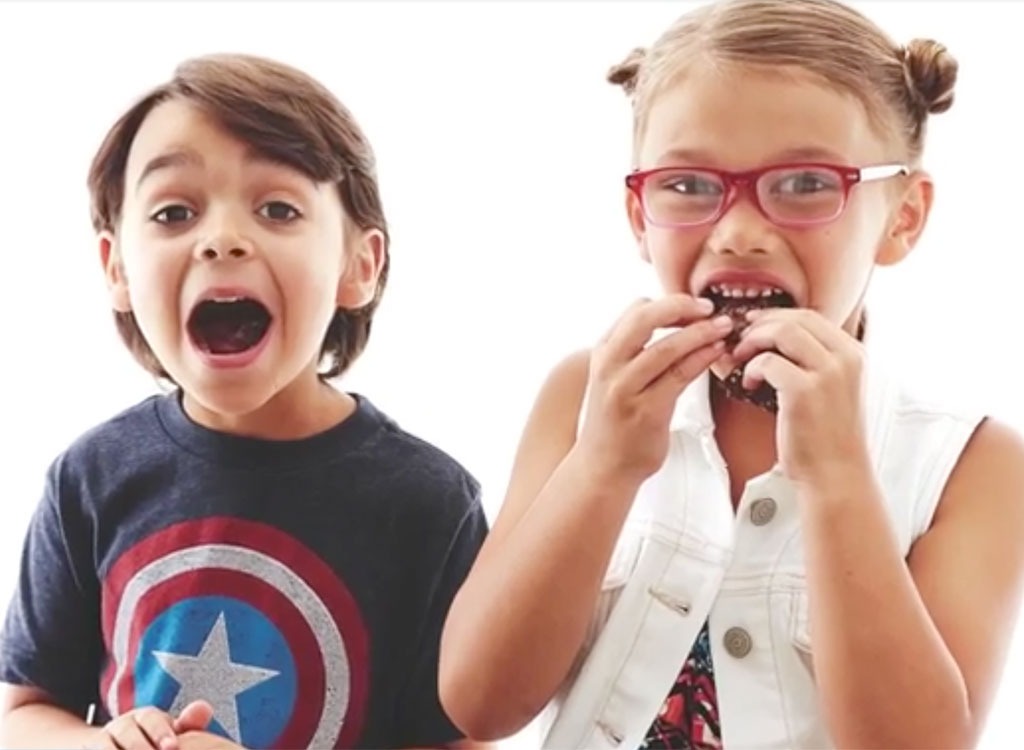 If you're jonesing for some fast food or chips, stick to single-serve, lunchbox-style snack packages, and kids' meals. The smaller portions allow you to get your fix without ingesting a ton of calories, helping you lose weight without going crazy. This is a great tactic for long-term flat stomach success. Here are 18 Easy Ways to Control Your Portion Sizes.

A recent survey by our friends at GrubHub found that "sauce on the side" was the number-one healthy takeout request. After crunching the numbers, we discovered that–no matter what kind of joint you're ordering from–you can save up to 1,000 calories at each meal just by asking them to put the sauce on the side.

Chocolate lovers, rejoice! Not only is the dark stuff rich in disease-fighting antioxidants, it can also help you eat less at your next meal. There are compounds in dark chocolate that slow the rate of digestion, helping you feel fuller, longer. Now that's sweet! Here's Why You Need Antioxidants In Your Diet—And How To Eat More Of Them.

In an Australian study that measured how satiating 38 popular foods are, researchers discovered that oranges rank above all other fruits—likely due to their high fiber and water content. What's more, according to scientists, smelling oranges can reduce anxiety. What's that have to do with getting flat abs? When you're anxious, the desire to nosh increases; whiffing an orange can ward off stress-induced, unhealthy dietary decisions that stop your stomach from flattening out.

Stock up on snacks.

Having a little something between meals can help ward off blood sugar dips that leave you feeling like you could eat an entire cake in one sitting. Stock your office, glove box, and kitchen with good snacks that are ab-friendly. Bloat-banishing bananas are one of our favorites. They keep well on a desk and pair nicely with hunger-fighting peanut butter. Hard-boiled eggs are another easy option. They contain a metabolism-spiking nutrient that wards off belly fat storage. Pair the eggs with some baby carrots to get even more vitamins and a dose of belly-filling fiber. You could also prep one of these 35+ Best Immune-Boosting Snacks!