11 Ways To Stop Carb Cravings Before They Start

Everyone knows what a food craving feels like. If you've forgotten, well then…SALT & VINEGAR POTATO CHIPS.

There's your reminder. You started to salivate, didn't you? Sorry. That's a symptom of craving, and if you keep thinking about and (salivating over) those salty, delicious, betcha-can't-eat-just-one chips, the more likely you'll be to rush out and buy a bag.

Cravings are powerful urges, especially cravings for carbs, because sugary carbs increase levels of a feel-good hormone called serotonin in your brain making you yearn for more of that happiness. Once they start, carb cravings are difficult to stop.

The trick to beating cravings involves action, taking steps to eliminate them, or, better yet, stopping carb cravings before they start. We have found 11 ways that should help you.

Keep chips off the table. 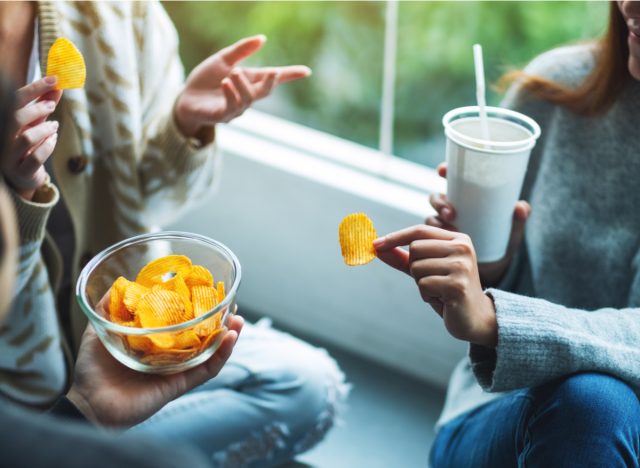 Foods that cause intense cravings are called "trigger foods." You see them or smell them and, boom, your hands, and mouth are off to the races. But if those trigger foods are out of sight, they're out of mind. So, hide that bag of Salt & Vinegar potato chips in a hard-to-reach cabinet. Or, better yet, don't bring them into the house. And here's an idea: Replace that bowl of chips or pretzels or Peanut M&Ms on the kitchen counter with a bowl of fresh fruit.

Carbohydrates are one of the three important macronutrients you need for good health. Your body needs carbs for energy, but "if you eat carbohydrates by themselves they can spike your blood sugar, causing it to drop later and set you up for an energy crash," explains Eathis.com medical board review member and registered dietitian Amy Goodson, MS, RD, CSSD, author of The Sports Nutrition Playbook.

"When your blood sugar drops, people often crave sugar, and it sets them on a blood sugar roller coaster for the rest of the day. Protein, on the other hand, helps you get full faster and stay full longer after a meal because, in comparison to carbohydrate and fat, it takes the longest to break down."

So, to avoid rebound carb cravings after eating carbohydrates, be sure to pair those carbs with some lean protein like hard-boiled eggs, string cheese, Greek yogurt, or even beef jerky, suggests Goodson.

Carbs have developed a bad reputation for causing weight gain in recent years, so much so that some people try to avoid all carbs all the time. Most dietitians advise against demonizing any one food, recommending a healthier approach: Give yourself permission to eat all kinds of foods. Science and anecdotal evidence suggest that "short-term, selective food deprivation may increase food cravings," according to the 2020 paper The Psychology of Food Cravings: the Role of Food Deprivation. In short, when you deny yourself something you're craving, the craving gets stronger. Try practicing mindfulness: Give in to that craving; have a small bite. Often just a taste is enough to satisfy a craving if you approach eating mindfully. It's when you shovel food into your mouth mindlessly that cravings turn into binge eating events.

Commit to a low-carb diet.

While abruptly cutting all carbs from your diet is likely to increase cravings for carbs, gradually reducing your carb intake and sticking with a diet low in simple carbohydrates can effectively reduce food cravings, according to scientific research.

One study published in the journal Obesity compared changes in food cravings, preferences, and appetite among overweight adults who followed either a low-fat diet or a low-carb diet for two years. The researchers found that compared to the low-fat dieters, those who reduced their carb intake had significantly greater decreases in cravings and preferences for high-carbohydrate and high-sugar foods like sweets and starches. Also, the low-carb dieters reported feeling less hunger than the low-fat dieters.

Fill up on fiber.

Eating foods rich in fiber crushes cravings through two mechanisms. First, "foods high in soluble fiber especially beans, peas, lentils, nuts, and seeds can help keep you feeling fuller for longer," says medical review board member Toby Amidor, MS, RD, CDN, an award-winning registered dietitian and author of the best-selling Diabetes Create Your Plate Meal Prep Cookbook. "Fiber also helps minimize spikes in blood sugar, keeping it more stable and may help cut down on cravings." Keep track of your fiber intake over a few days to see if you're deficient. Most people get less than half the amount of daily recommended fiber, between 25 and 38 grams per day, says Amidor.

It's hard to eat a bag of cheese curls while you're huffing and puffing during exercise. That's obvious. But research has shown that exercise may also take the edge off intense cravings for carbohydrates, suggesting that a workout could be an effective way to combat urges for sugary snack foods.

In a small 2015 study, researchers found that overweight participants who walked at a brisk pace for 15 minutes reported reduced cravings for sugary snacks compared with those who simply sat quietly for the same amount of time, suggesting that physical activity may be an effective method for reducing carbohydrate cravings and fostering weight loss.

Staying hydrated is good for overall health and it stifles carb cravings. "Sometimes thirst can appear as hunger," says Amidor. "Sipping on water throughout the day can help keep you hydrated and may help keep hunger and cravings at bay." Remember that sparkling water, unsweetened coffee, or tea count toward your water quota.6254a4d1642c605c54bf1cab17d50f1e

Many people still think skipping breakfast is the way to lose weight. That strategy often backfires. "People who eat less in the morning typically crave carbohydrates or sugar later in the day," says Goodson. "But when people start the day with a high-fiber, protein-rich breakfast, they tend to eat less at night and avoid some of those evening cravings."

Goodson recommends eggs, whole grain toast, and milk or oatmeal with nuts, seeds, and nut butter paired with Greek yogurt to kick off your day.

Skipping meals or going a long time without a snack can set you up for craving carbohydrate-rich foods and sweets later in the day, says Goodson. "Eating small, frequent meals with high-fiber carbohydrates and protein can help you keep your blood sugar stable and ward off those cravings," she says.

Eating mindfully to curb carb cravings takes practice, but the technology in your pocket or purse can help, according to a study in the Journal of Behavioral Medicine.

In one experiment, subjects were given a mindfulness app called the "Want-O-Meter," which guides users through a craving as they are experiencing it and another tool called the RAIN exercise that helps users Recognize, Accept, Investigate, and Note what cravings feel like as they happen. The user can then choose to eat the craved food in moderation instead of with a sense of compulsion, teaching awareness and control. You can find dozens of mindfulness apps for your Android or iOS phone.

How many hours of sleep did you get last night? Did you wake up craving carbs? There's a link between sleep deprivation and high-calorie food cravings, according to a 2020 study in the Journal of the American Heart Association. "When you don't get enough sleep, you are less mindful over the foods you choose to eat," says Amidor. "You also may crave comfort foods, like mac and cheese or potato chips." Shoot for getting a minimum of 7 hours of sleep each night. Your carb cravings may become as inconsequential as a bad dream.

Jeff Csatari
Jeff Csatari, a contributing writer for Eat This, Not That!, is responsible for editing Galvanized Media books and magazines and for advising journalism students through the Zinczenko New Media Center at Moravian University in Bethlehem, PA. Read more about Jeff
Filed Under
Carbs // Clean Eating // Complex Carbs // Cravings // Healthy Foods // Tips