The Worst Bags of Chips You Should Never Buy

These are the options from popular brands you're going to want to skip.

When the craving for something salty and crunchy hits, there's a good chance you'll end up reaching for a bag of chips. But some bags from popular brands are just downright dangerous.

See, chips have been proven to be a truly addictive snack—there really is evidence you can't ever eat just one—and it's, well, not the healthiest snack option around. Think about how easy it is to eat an entire bag in one sitting! Plus, one study found that eating salty foods actually promotes the overconsumption of fatty foods, which can then lead to weight gain. And it's no secret that chips are often sodium bombs.

However, we know how unrealistic it is for most people to never touch a bag of chips ever again. You can enjoy the occasional potato chip, as long as you're keeping an eye on your portions and aren't choosing some of the worst bags of chips around.

So to help you make the best choice when you're food shopping, we rounded up some of the worst bags of chips you simply should always leave on grocery store shelves. We looked at the most popular chip brands and uncovered the one bag from each brand you shouldn't ever add to your shopping cart. 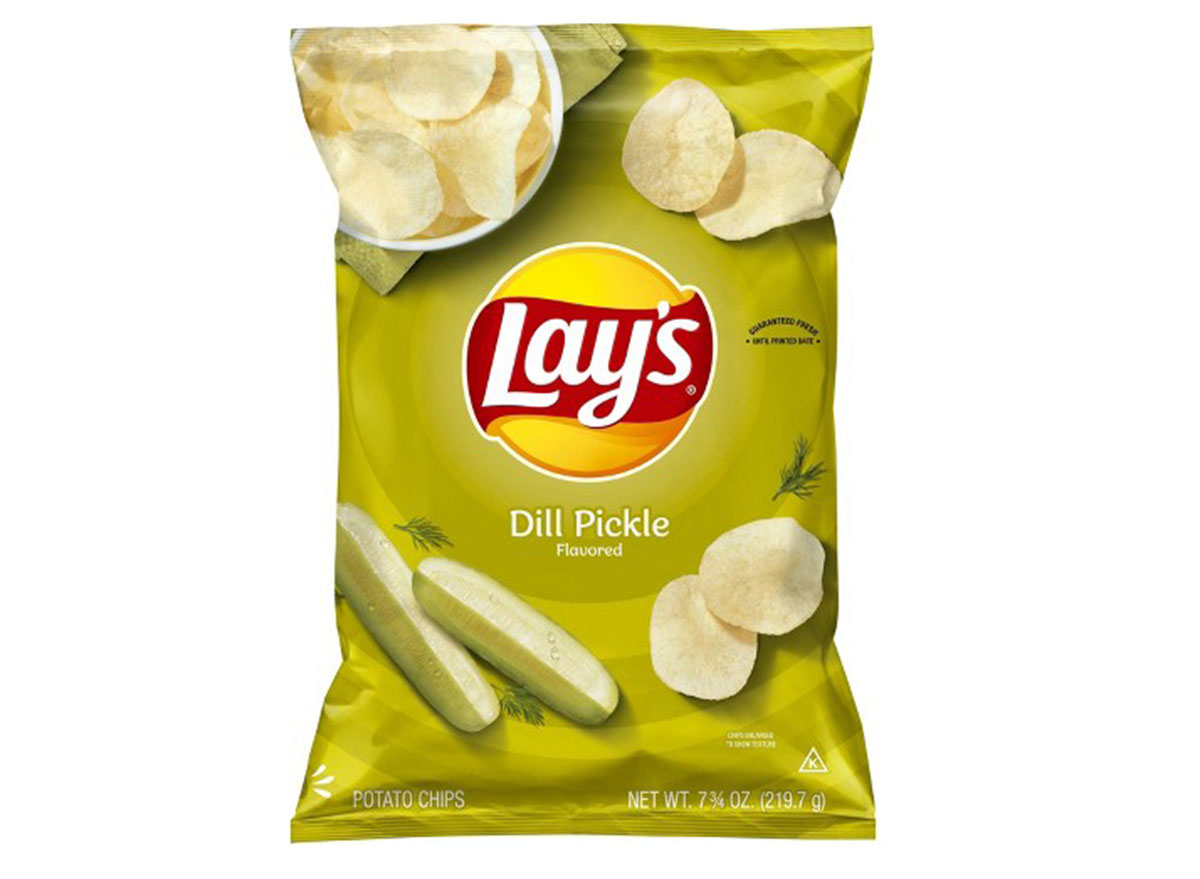 If you eat a Lay's potato chip, you're said to get "happiness in every bite." Well, we beg to differ, especially if you're going for the dill pickle flavor. One serving is not only coming in at 210 milligrams of sodium, but it has 10 grams of fat. Keep in mind The FDA recommends those who follow a 2,000-calorie a day diet should have no more than 78 grams of fat per day. 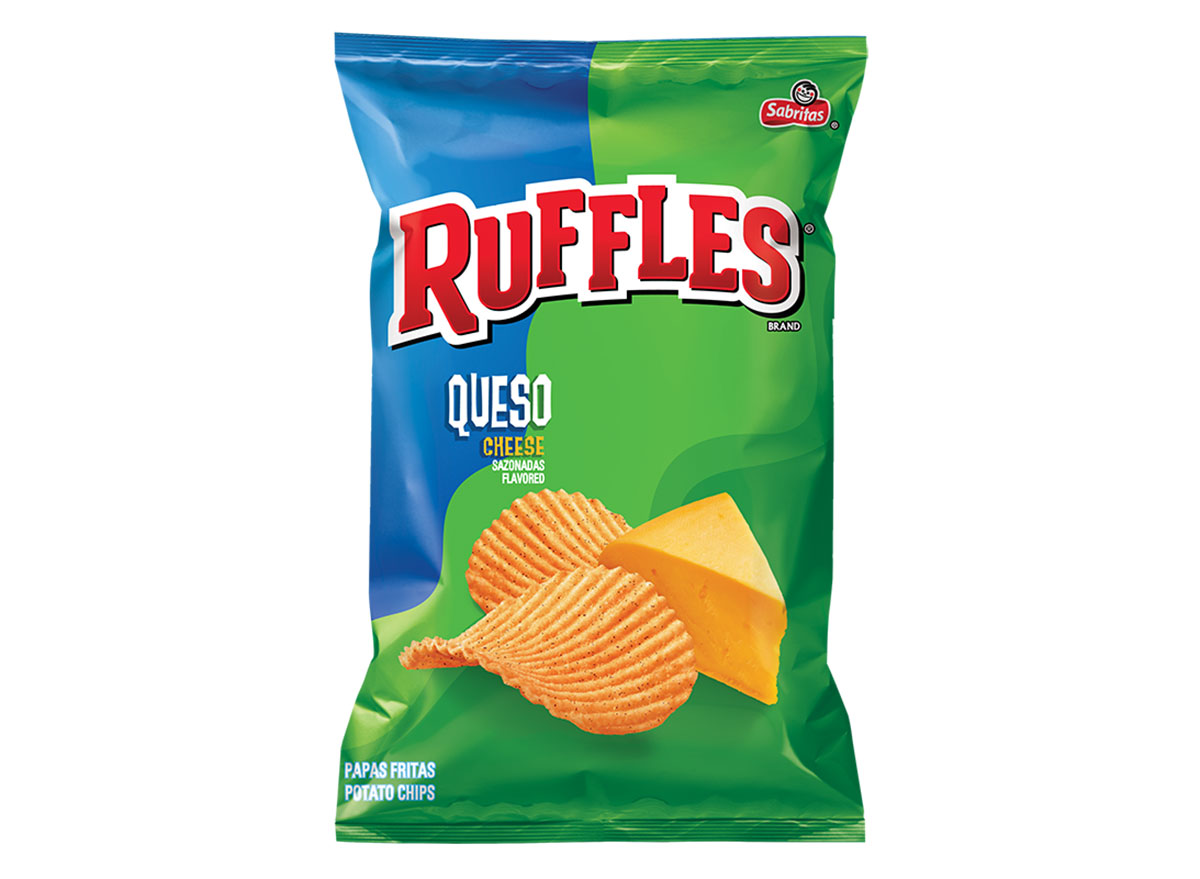 Ruffles is another classic chip brand, but the Queso Cheese flavor is one you want to skip. Here, a blend of queso cheese, peppers, and smoky spices come together in one chip. And that means just 11 of these crisps are serving up 230 milligrams of sodium.

The American Heart Association suggests most adults consume no more than 2,300 milligrams of sodium per day, moving toward an ideal limit of no more than 1,500 milligrams per day. It's easy to see how sitting and eating a bag of these while you're watching some Netflix can be dangerous!

One look at the nutrition breakdown of Herr's Salt & Vinegar chips, and you'll see one serving is packing 490 milligrams of the salty stuff. That is for the entire bag, but these bags are small and when you think about it, most potato chip bags aren't even filled up all the way. Imagine if it was…

Not sure what you can do to drop that unwanted pounds? Learn how to fire up your metabolism and lose weight the smart way! 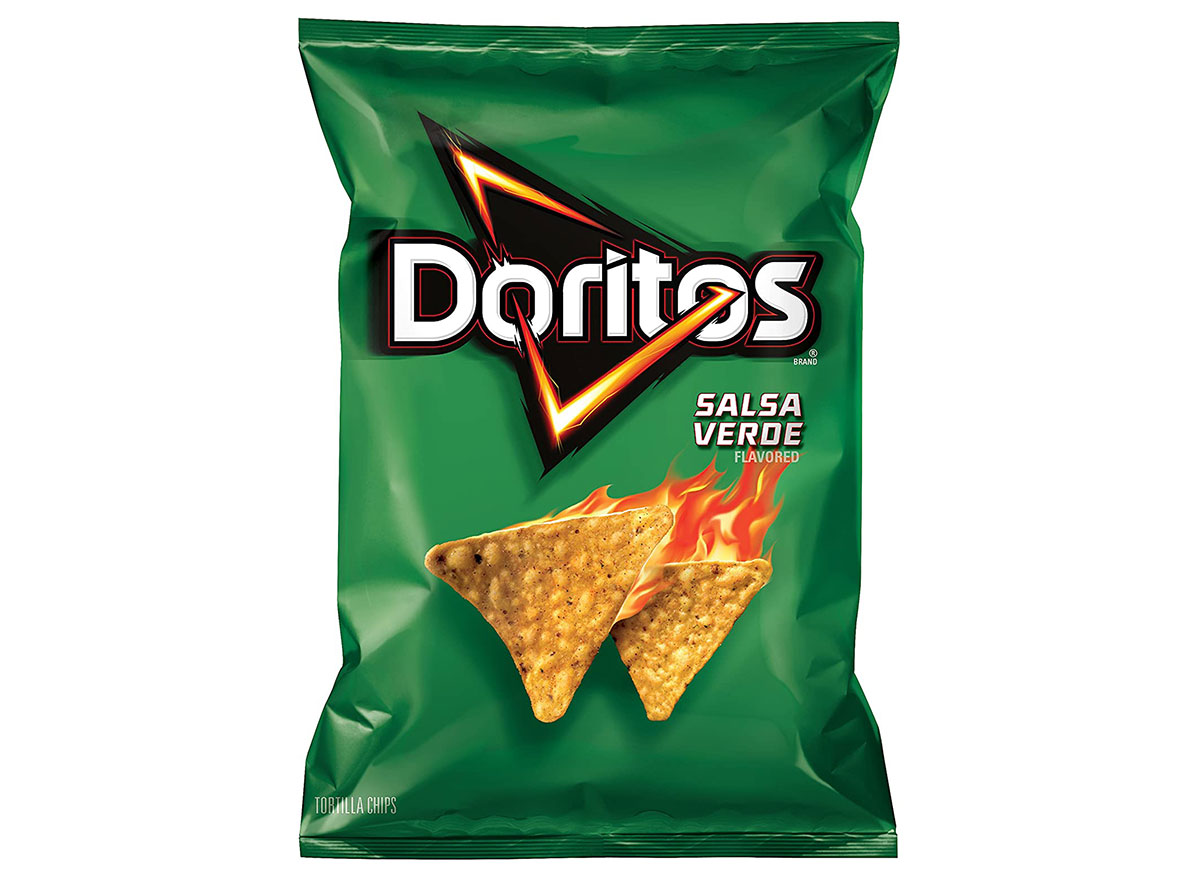 The salsa verde flavor of Doritos might sound rather fancy, but Doritos are still Doritos. If you look at the ingredients list, you'll still spot monosodium glutamate, or as it's better known as, MSG. It's a controversial food additive that is deemed safe by The FDA, but can cause adverse effects such as headaches, dizziness, muscle tightness in some people. 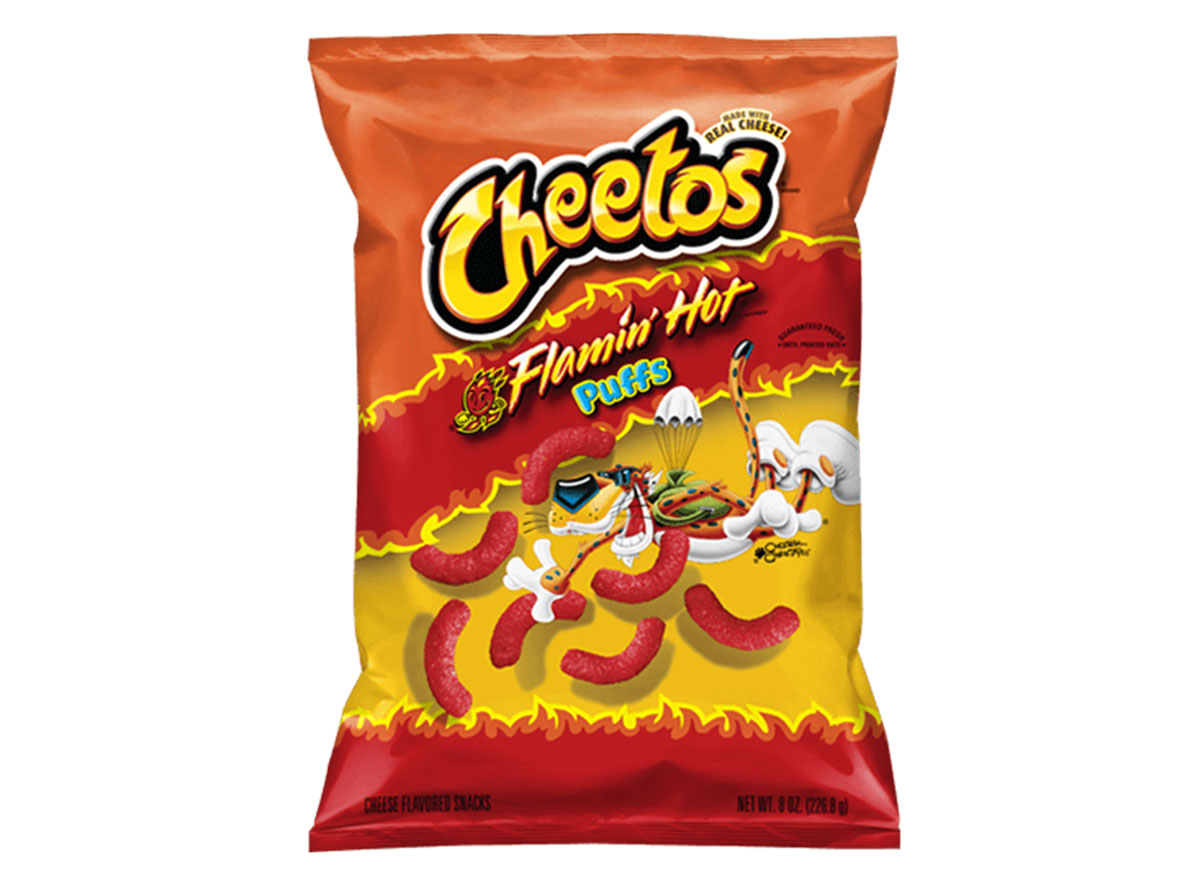 Oh, Cheetos. There really is no experience quite like opening a bag of Cheetos Puffs and feasting on a snack that leaves your fingers orange. But it really doesn't come as much of a surprise that the spicy Flamin' Hot cheese flavored snacks are coming in at more than 300 milligrams of sodium per serving. And a side effect of eating salty foods often that is simply no fun?

A study in The American Journal of Gastroenterology found that bloating was actually (and not really all that surprisingly!) more common in those who ate a high-sodium diet compared to those who ate a low-sodium diet. Just nix the Cheetos! 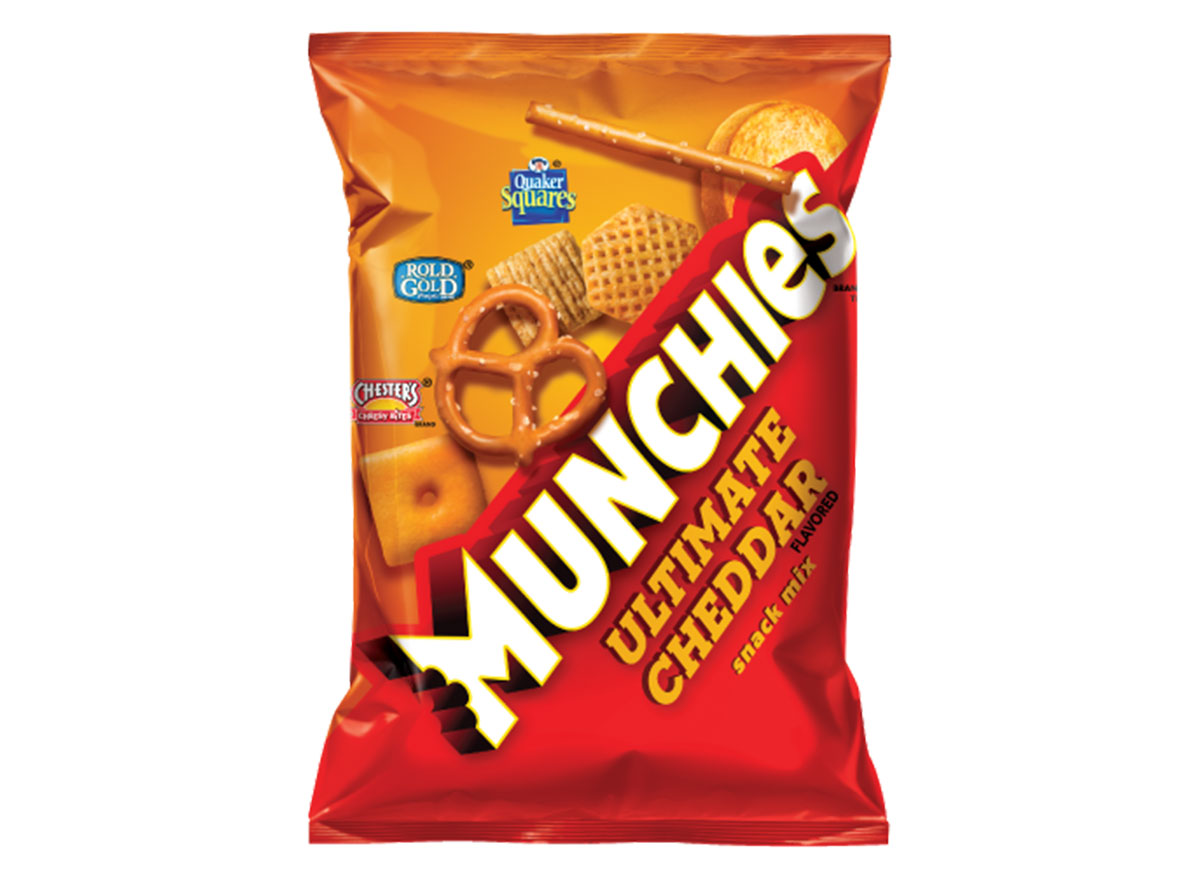 A bag of Munchies is a dream salty snack for someone who wants to try a bit of everything. While it's overall lower in fat than some of the other options, one serving has 270 milligrams of sodium. Again, it's far too easy to eat more than the serving size at one time! 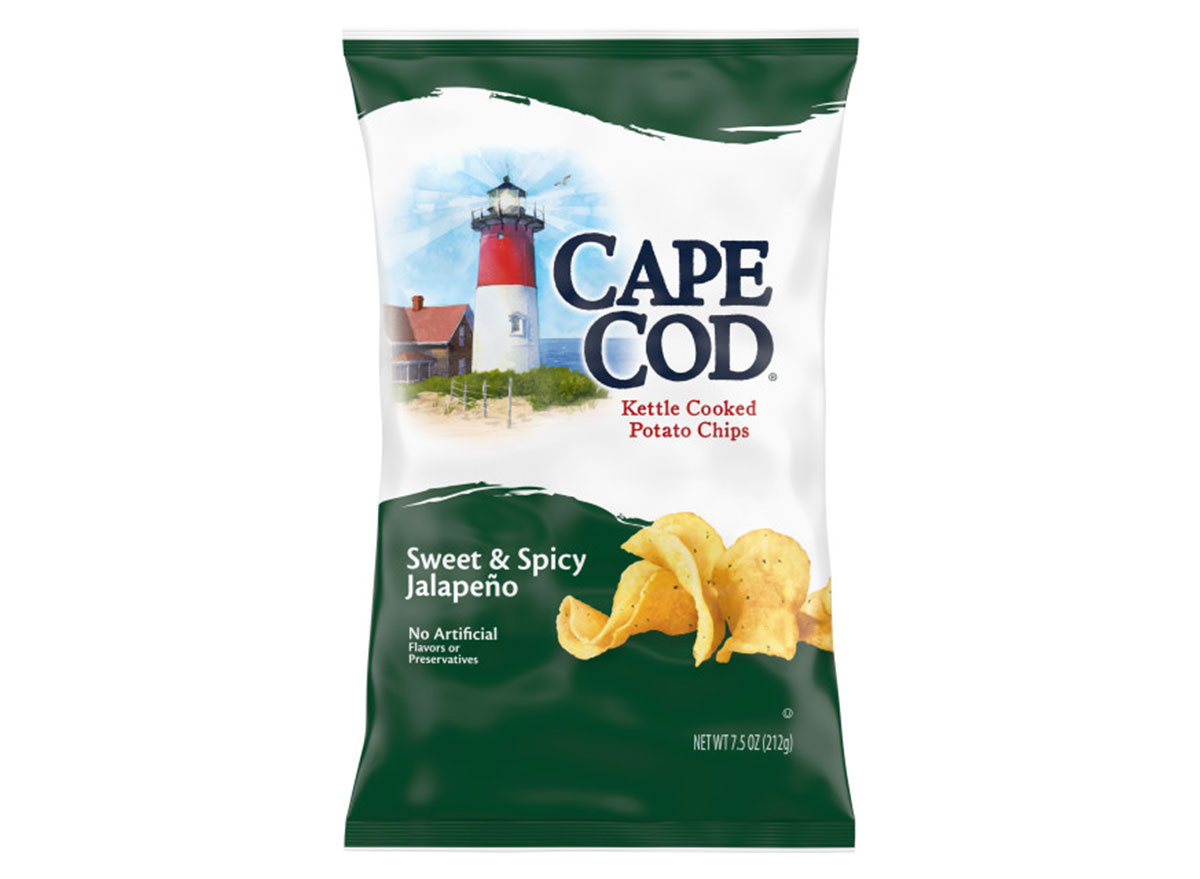 The Sweet & Spicy Jalapeño Cape Cod chips are similar to Munchies' nutritional breakdown. You do get 18 chips in one serving here, so if you're able to have half of that at a time, you'll be in much better shape. 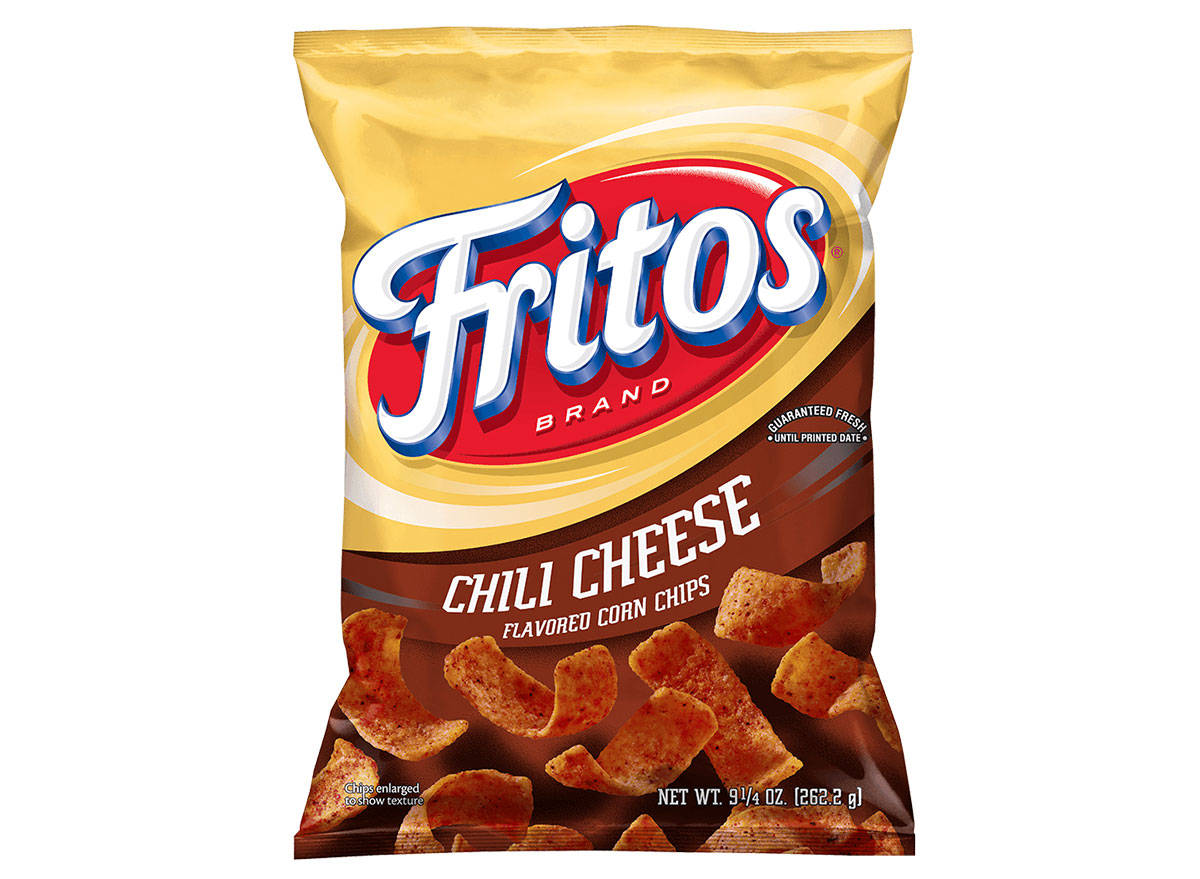 Fritos takes the basic corn chip up a notch, intertwining chili and cheese in this version to create a savory, crunchy snack. These chips are packing quit a bit of fat and they are very small—makes it hard to control how much you're eating! 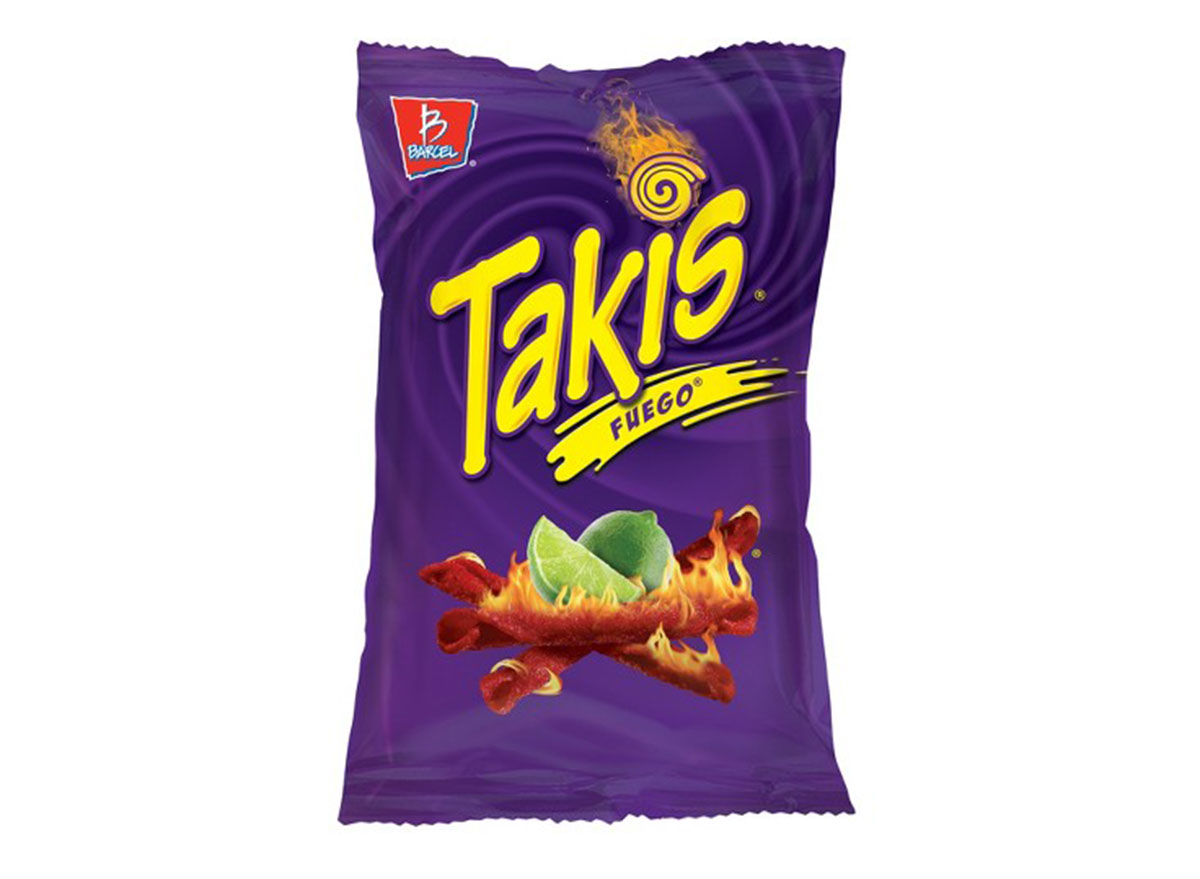 Takis are rolled tortilla chips that really do bring the heat. Along with that kick is 410 milligrams of sodium! If you eat these often and notice you're suffering from headaches, there could easily be a connection. One study in the journal BMJ examined 400 participants and found those who ate foods that are high in sodium had one-third more headaches than those who ate foods low in sodium…

Jennifer Maldonado
Jennifer Maldonado is a senior editor at Eat This, Not That!, specializing in food and health content. Read more
Filed Under
Chips // Foods To Avoid // Snacks // Unhealthy