11 Worst Chips to Stay Away From Right Now

Even if you're a salty snacker, you should avoid picking up these chips from the grocery store shelves.

No matter what your flavor preferences are, there's a chip out there for you. From the sweet-and-savory standby barbeque to simple sea salt, as well as the straight-up odd flavors, like crab and seaweed. There's an abundance of flavors to choose from, making chips an ideal snack for many people, although they might not always be the healthiest.

It's fairly common knowledge that if you're looking for a healthy snack, then potato chips and other crunchy snacks, which are typically deep-fried and packed with fat and sodium, aren't going to be the right call, but some chips are far worse than others. Here are our picks for some of the worst chips to buy right now. 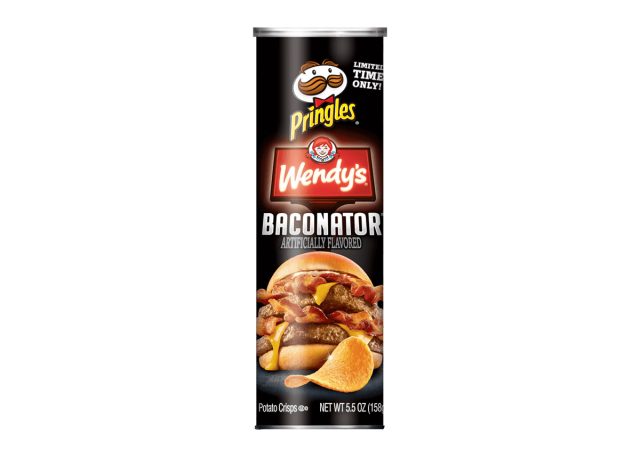 It's pretty obvious that when you combine chips and one of the fast-food chain Wendy's more unhealthy burgers, you're not in for a nutritionally-balanced snack. Pringles Baconator, its mashup with Wendy's bacon-filled burger, is high in calories, sodium, and saturated fat, all of which can lead to health problems if you regularly consume the chips.

"These chips are very high in both saturated fat and sodium, two harmful ingredients that in excess can increase the risk of high cholesterol, high blood pressure, and heart disease," says Melissa Mitri, a registered dietitian at Fin vs Fin.

Mitri adds that in addition to being high in things that can lead to bad health, there's almost no nutritional value from the chips, so there's no good coming from them either.

"These chips also provide very little in terms of nutrition and do not offer any particular health benefits," Mitri says. "Steer clear of these chips and if you have them, stick to just a small handful."

Combining chips with ranch dressing is never going to be a healthy option, and Doritos Cool Ranch chips are no exception.

"Doritos are one of the worst types of chips to consume," says Trista Best, a registered dietitian at Balance One Supplements. "They are made with artificial colors and flavors along with refined carbs. This form of carb causes a rapid increase in glucose, which increases the body's fat-storing rate."

Best says that it's not just Cool Ranch that you should avoid, but all flavors of Doritos are just as nutritionally lacking. if you're determined to eat some Doritos, the most nutrition-minded version of the chips are varieties that are made from whole grains or baked.

"This brand of chips is one that is easy to snack mindlessly due to their various flavors," Best says. "When eating chips, if you must, it is best to opt for whole grain and baked options or to eat them pre-portioned."

Cheetos Puffs don't just puff up the chip size, but they've also inflated the amount of fat, sodium, and carbs in a serving of the chips, making it one of the more unhealthy chips available at a supermarket.6254a4d1642c605c54bf1cab17d50f1e

"This calorie-laden snack will blow your diet in just a few bites," Mitri says. "They pack a whopping 130 calories in just 13 pieces, which for most of us is a portion all too easy to eat. They also are higher in sodium than most other chip snacks, containing 270 mg in one serving."

Even though there is a serving size, Mitri says that Cheetos can be addicting, leading consumers to eat way more than the outlined serving size.

"The [sodium content] can also make it more addicting and harder to control in terms of sticking to the serving size," Mitri says. 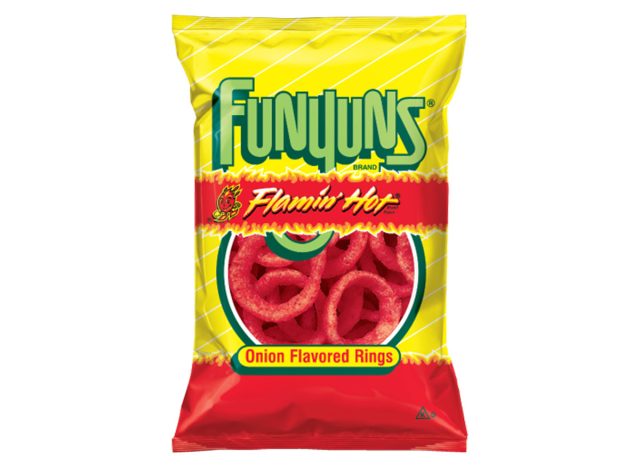 While Funyuns Flamin' Hot aren't the worst offenders when it comes to calories, the onion-flavored chips are loaded with excess sodium. They also contain two artificial colors, to help the chip highlight that it's truly flamin' hot with a vibrant, unnatural red color.

Registered dietitian Amy Shapiro says that one of the most important things to stay away from when picking out a bag of chips is artificial coloring, especially yellow 5 and red 40. Unfortunately for flamin' hot fans, Funyuns Flamin' Hot contains both.

With no extra flavors, or larger-than-life sizing, it doesn't seem that Ruffles Original Potato Chips would be one of the worst chips to stay away from, but the chips are deep-fried, which means that they're not only packed with flavor but also packed with cholesterol-raising fat.

"At 160 calories for only 12 chips, Ruffles brand chips are one of the worst chip brands for you," Mitri says. "Their chips are deep-fried and therefore pack on a lot of fat, especially the type that can raise your cholesterol. They are also high in sodium and contain very little in terms of nutritional value, so it's best to leave these chips on the grocery shelf."

RELATED: The Best & Worst Pasta on the Shelves—Ranked by Nutritional Benefits 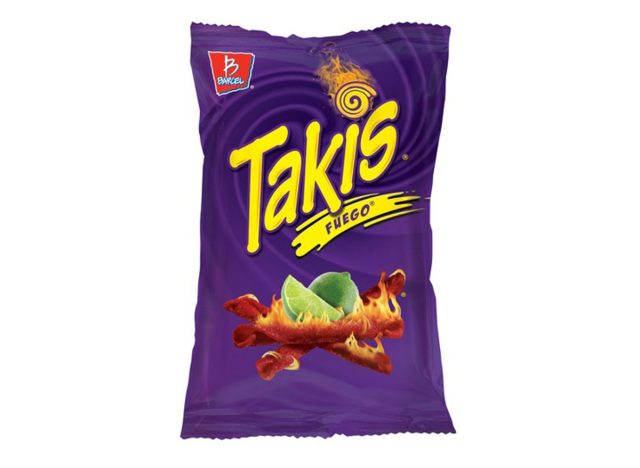 Takis might be one of the coolest relatively new chips on the market, but that doesn't mean that they're following any recent diet trends. The chips, especially the Fuego flavor, are packed with processed ingredients and an extremely high sodium content.

"Takis Fuego chips may be tasty, but they are one of the worst choices nutritionally, due to their long list of highly processed ingredients, including additives and food colorings and their extra high salt content," says Sara Chatfield, a registered dietitian at Health Canal.

One of the reasons that Takis are so bad for you is because of their high sodium content, which can lead to overconsumption. "At 420 mg sodium per 1 ounce serving, you'll be at almost 20 percent of the recommended daily intake," Chatfield says. "Because highly processed foods such as chips encourage us to overeat, you're likely to consume more than that, particularly when eating from a large bag." 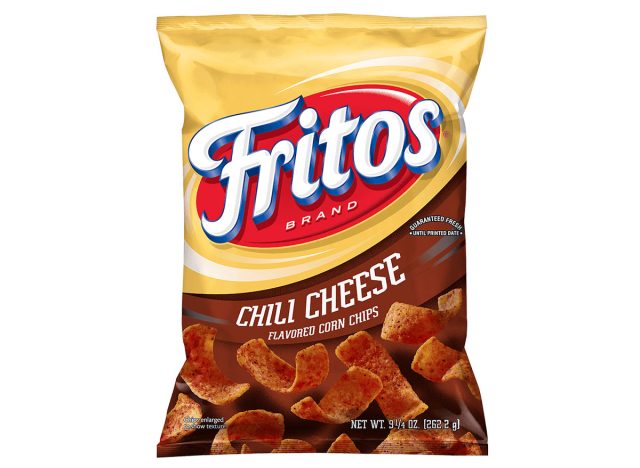 If you're on the market for healthy food, then chips aren't the best option, but of course, there are some chips that are better than others. You could pick up a bag of natural chips made with few ingredients, or you could make a more unhealthy choice and get a bag of Fritos Chili Cheese Flavored Corn Chips, which contain no chili powder or cheese.

Shapiro says the best ingredients for potato chips to contain would be potatoes, oil, sea salt, and other natural ingredients. Instead, Fritos Chili Cheese Flavored Corn Chips contain molasses solids and a whole bunch of artificial coloring to result in the chip's burnt orange hue, as well as natural and artificial flavorings.

Baked chips are marketed as being a healthier option than regular potato chips, and while these chips are lower in calories and fat than some of the other options on the list, they're still packed with sodium and carbs. Mitri says that chips high in sodium are likely to contribute to high cholesterol, high blood pressure, and heart disease.

Rather than having natural coloring, the chips also contain artificial coloring, including Yellow 6 and Yellow 5.

"Saturated fats come from animal fats, therefore if you are having chicken or red meat in your day then this is where your animal fats should be," Kaufman says. "Chips should ideally have a minimum amount of saturated fats."

In addition to the high amount of fat found in Herr's Salt and Vinegar chips, the brand also has a whopping 490 mg of sodium in one serving of 13 chips, making up more than 20 percent of the recommended daily total. 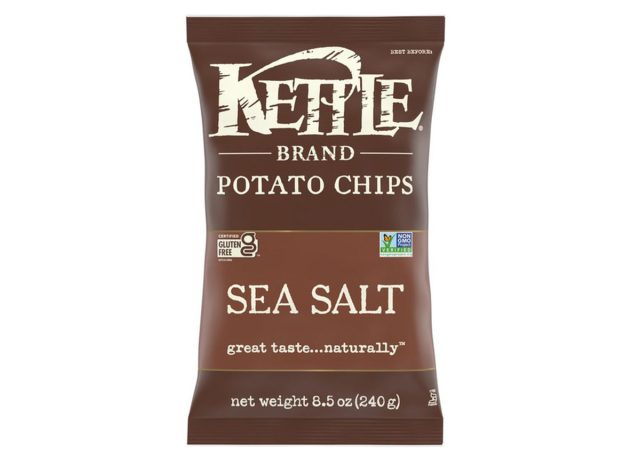 For a chip whose flavor is literally salt, Kettle Sea Salt chips aren't the worst offender when it comes to having a high sodium content. They also are made of only three ingredients—potatoes, oil, and sea salt. You'd think they'd be your healthiest bet, right? Despite the low amount of ingredients, the chips are packed with fat, with 9 grams of fat taking up 12 percent of your total daily value.

"Chips are among some of the worst snacks to consume on a regular basis," Best says. "They are often fried, made with inflammatory omega-6 oils, refined carbohydrates, and a combination of fat and carbs that cause oxidative stress in the body." 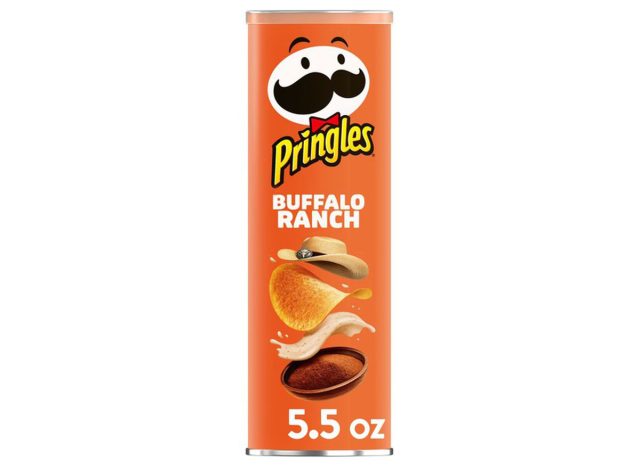 No one is denying that Buffalo ranch is a delicious flavor combination, but is it the healthiest? Definitely not. Just like the salty sauce that is the basis for this flavor, the Pringles variation packs in a whopping 280 milligrams of sodium in one serving of just 15 chips, which is 12 percent of the total daily value that you should be consuming in one day.

Eating an excess amount of sodium can result in a higher likelihood of having high blood pressure, heart disease, and stroke.

RELATED: The Most Popular Chips You've Got to Try at Least Once