6 Flat-Belly Foods for a Healthy Gut

Happening right now, inside your belly, is an epic power struggle worthy of Shakespeare. But instead of Tudors and Plantagents, you have different sorts of microbes battling it out to become monarch of your midsection—about 500 different tribes, in fact.

Some of them break down your food and extract nutrients; others hunt for food pathogens that snuck in on a bad bit of bratwurst; still others help protect you from colds and flus. (In fact, 80 percent of our immune system is based in our guts.) Scientists even believe that depression may be caused in part by unbalanced gut microbes, since 95 percent of our feel-good hormone serotonin is also located in the belly.

But it's our weight that's most dramatically affected by these little buggers. In fact, studies show that obese people have higher levels of bad bacteria from the phylum Firmicutes, while lean people have higher levels of bacteria from the phylum Bacteroidetes. But as with any conflict, sometimes the good guys get overwhelmed. Too much junk food (especially sugar) can knock our digestive systems out of whack and give the advantage over to the Firmicutes (a poorly named tribe, as they make you neither firm nor cute); so too can drugs like antibiotics, heartburn remedies, or antidepressants.

In my research for Zero Belly Diet and the forthcoming Zero Belly Cookbook, I've discovered six foods that are critical to helping you strike the perfect balance—and flatten your belly fast.

Researchers at Kyung Hee University in Seoul, Korea, induced obesity in lab rats by feeding them a high-fat diet, then fed one group of them probiotics (in this case, Lactobacillus brevis, a healthy bacteria found in fermented foods like kimchi). The probiotic suppressed the diet-induced increase in weight gain by 28 percent! You can find the same benefits in sauerkraut, pickles, brined olives, and other fermented foods.

One of the big buzzwords in nutrition right now is "resistant starch," a type of carbohydrate that, as the name suggests, resists digestion. When you do resistance training, your muscles get stronger. But according to a 2015 study in the Journal of Functional Foods, when you eat resistant starch, your gut biome gets stronger—healthy bacteria literally get a workout digesting the healthy starch, becoming more dominant and leading to a healthier gut. Bananas and plantains have the highest level of resistant starch of any fruit; other foods include beans, grains and seeds.

Olive oil is rich in antibacterial phenolic compounds, which help battle bad bacteria, according to Tanseem Bhatia, M.D., author of The 21-Day Belly Fix. The potent potable has been shown to combat eight strains of bacteria that have been linked to peptic ulcers and gastric cancers. 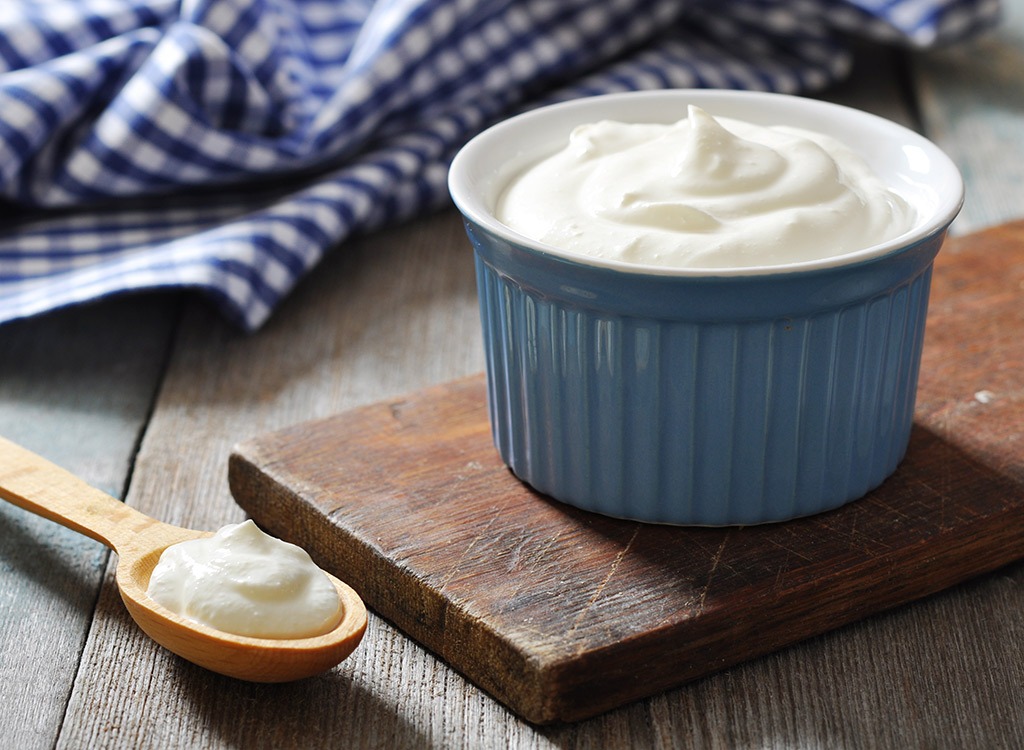 While yogurt has a reputation for being good for belly bacteria, most reduced-fat yogurts are so high in added sugars that they'll do more for the bad bacteria in your belly than they will for the good. If you do choose to eat yogurt, look for less than 15 grams of sugar per serving and the words "live active cultures" on the label.

A Harvard study recently found that a diet based primarily on animal protein—especially one that involves a lot of burger wrappers—can quickly alter the delicate balance of microbes in your belly as well. But in a 2015 study in the Journal of Diabetes Investigation, researchers discovered that patients who ingested higher amounts of vegetable protein were far less susceptible to metabolic syndrome (a disease that ought to be renamed "diabolic syndrome"—it's basically a combination of high cholesterol, high blood sugar, and obesity). A second study in Nutrition Journal found that "plant protein intakes may play a role in preventing obesity." Spirulina is mostly protein by weight; other good plant sources include quinoa, hemp or chia seeds, and nuts and beans.

A study at Louisiana State University found that gut microbes in our stomach ferment chocolate and boost our body's production of heart-healthy polyphenolic compounds, including butyrate, a fatty acid that decelerates the behavior of genes linked to insulin and inflammation. (Add fruit to the chocolate to boost fermentation and the release of the compounds.) But make sure you're choosing the right kind of chocolate: look for a cacao content of 70 percent or above, and stay away from "Dutch" chocolate, as the Dutching process destroys up to 77 percent of the healthy compounds in the chocolate.

David Zinczenko
Dave is a globally recognized expert in health, fitness, nutrition, and weight loss and is the #1 New York Times bestselling author of 25 books in 15 languages. Read more
Filed Under
Gut Health