Other countries are well aware of the negative health effects of consuming these foods, but it's ok for us to eat them.

What if someone told you the plate of food you just devoured was filled with the same chemicals used to make yoga mats, preservatives found in wax food packaging, and a major component of rat poisoning? Yeah, not too appetizing. Unfortunately for those living in the United States, that's the reality of what just went into your stomach.

While unnaturally dyed foods and hormone-packed meats are the norm in the U.S. and not something most people think twice about, many of the foods Americans eat on the daily are actually banned in countries across the globe. While the dairy industry is having a hissy fit over almond milk trying to call itself "milk," there are bigger problems being ignored. Like why U.S. milk is banned throughout the European Union and Canada because the milk in those cartons may be a danger to human health. That almond "milk" certainly sounds more appealing now, doesn't it?

Before you head to the grocery store, get to know the foods commonly sold in the U.S. that other countries are working hard to protect their citizens from. It might make you rethink the way you shop.

Mountain Dew has been promoting an extreme, wild lifestyle since its initial release. And yeah: Sipping on it is pretty crazy considering the beverage contains Brominated Vegetable Oil (BVO), a food additive that's used in some citrus sodas. According to the Mayo Clinic, bromine—one of its key ingredients—can irritate the skin and mucous membranes, as well as cause headaches, memory loss, and impaired balance and coordination. That's exactly why you won't find Mountain Dew—or Caffeine-Free Sun Drop—in the European Union, India, and Japan. 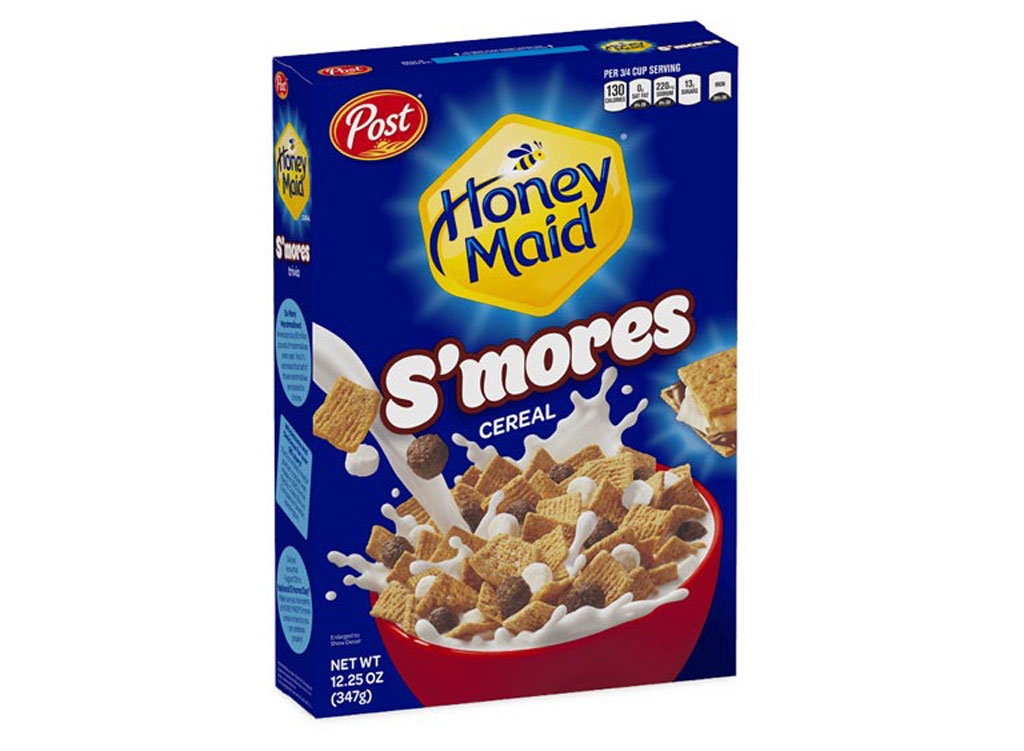 Pouring yourself a bowl of cereal, like Post's Honey Maid S'mores, in the U.S. might not taste super different than doing so elsewhere, but there are some hidden dangers within those distractingly colorful boxes. Some of the cereals in U.S. cereal aisles contain the preservative Butylated Hydroxytoluene (BHT), and because of that, they can't be sold in many other countries around the world. BHT is banned in the UK, Australia, New Zealand, Japan and much of Europe because it's thought to be a human carcinogen. Thankfully, many cereal manufacturers, like General Mills and Kellogg's, have pledged to find alternatives to this additive and have been steadily removing it from their product formulations.

Kids in the U.S. grow up eating Skittles. Because they contain the artificial colors yellow 5 and yellow 6 —along with many other foods in the U.S., from crackers and chips to drinks—they're banned in Norway and Sweden because they're thought to cause allergic reactions, as well as hyperactivity in children, as explained by the Center for Science in the Public Interest (CSPI). While they're not banned in the European Union, they're made using colors that occur naturally in fruits, vegetables, and spices, like turmeric. Products that do contain yellow 5 and yellow 6 must be labeled with the phrase: "May have an adverse effect on activity and attention in children."

If you drink milk on the regular, antibiotics aren't the only thing you should be worried about. Milk in the U.S. also contains the growth hormone rBGH (which also goes by rBST)—a synthetic man-made growth hormone that's used to increase milk production in dairy cows. Unless your milk is organic or says "does not contain rBGH," you're drinking milk that's banned in the European Union, Canada, and other countries due to its potential effects on human health, including an increased risk of cancer, says the American Cancer Society. Luckily, your risk of ingesting the hormone is decreasing, as only 9.7 percent of U.S. dairy operations were using rbGH, according to a 2014 report by the USDA.

Since Europe is much more strict over the ingredients in food than the U.S., it's no surprise that some of the products are different depending on where you buy them. While M&Ms in the U.S. are made using artificial colors, they're still sold in Europe where there's a ban or warnings against those additives—but only because the batches across the pond are made using natural colors instead. After a 2014 petition for Mars Inc. to give the U.S. the same quality ingredients in M&Ms as Europe, the company said it would stop using artificial dyes, although that still hasn't happened.

While not all bread products are bad, unfortunately, some of them, like Jimmy Dean Delights Turkey Sausage, Egg & Cheese Honey Wheat Flatbread and Pillsbury Breadsticks, contain azodicarbonamide, a chemical compound that's actually used to make yoga mats and shoe soles. Not too appetizing, huh? It's also found in packaged baked goods and bread as a whitening agent and dough conditioner in bread and cereal flour. While the FDA still allows it to be used in numerous foods in the U.S., you won't find it in Europe and Australia: It's been linked to respiratory problems and other health issues. In Singapore, using it could get you fined $450,000 and put in jail for up to 15 years.

Having your chicken washed in chlorine before getting to your plate probably doesn't sound too appetizing, huh? The European Union sure doesn't think so. The EU has had a long-standing ban on chicken that's been washed in chlorine since 1997, yet many chicken companies in the U.S. still use chlorinated water baths, rinses, and mists as an antimicrobial treatment to kill bacteria. (In fact, chlorine-washed chicken is back in the news recently with Brexit trade negotiations as the U.S. attempts to convince the U.K. to scrap regulations that "distort agricultural markets to the detriment," including allowing the sale of chlorine chicken in the U.K., according to NBC.)

The EU is against the process because it believes there should be a "high level of safety throughout the food chain, from farm to fork"—not just trying to heavily clean the meat at the end of the process to compensate for poor hygiene standards earlier on, like all the overcrowding and mistreatment of the animals before slaughter that causes disease in the first place. Be on the lookout for certain food certifications on product labels so you can shop consciously.

The next time you go for another serving of instant mashed potatoes, like Hungry Jack Mashed Potatoes, just know you're also getting a side of Butylated Hydroxyanisole (BHA). The preservative can be found in everything from cereal and potato chips to chewing gum and beer. But considering it's also in rubber and wax food packaging, it doesn't seem like anything you'd want to put in your body. While it's commonly used in the U.S., it's been banned in the Europe Union, Japan, Australia, and other countries for potentially being a human carcinogen.

There's a reason why pigs in the U.S. get super big, super fast: Even though 160 nations—including the European Union, Russia, and China—have banned the use of the drug ractopamine, the U.S. pork industry still uses it in the majority of pigs. That means the pork you're buying at the store likely contains it—and is why the U.S. can't sell pork to many other countries. The drug is thought to affect the cardiovascular system and cause hyperactivity, behavioral changes, and elevated heart rates and heart-pounding sensations.

Some U.S. breads, rolls, and buns—from pre-made products like Lucca's Enriched Italian Rolls to ingredients manufactured for food service providers, like Pillsbury So Strong Special Flour—contain the food additive potassium bromate. This chemical is often used during flour processing to get higher-rising, whiter dough when baking bread products. That's not good news for your health. According to the Environmental Working Group (EWG), it's been linked to cancer. While California warns residents of its dangers—requiring products to list a warning on labels—the only places it's actually banned is outside the country, including in Europe, Canada, Brazil, South Korea, Nigeria, and Peru.

Don't expect to see hormone-grown beef from the U.S. sold in the European Union anytime soon. The European Commission's Scientific Committee on Veterinary Measures found the synthetic hormones used to promote growth in cattle—which includes Zeranol, Trenbolone acetate, and Melengestrol acetate—can increase the risk of breast cancer and prostate cancer. Basically, if the meat comes from the U.S., the rest of the world wants nothing to do with it. And while federal regulations prohibit the use of hormones in raising pork and poultry, the same can't be said for beef. To avoid growth-hormones in your food, look for the organic seal, which prohibits the administration of growth-promoting hormones to cattle. Or, maybe it's time for you to stop eating it.