The Best & Worst Barbecue Sauces on Store Shelves, According to RDs

Experts weigh-in so you know exactly which sauces to buy and which to avoid.

Barbecue sauce is the much-needed complement for juicy, baby back ribs or even a grilled chicken sandwich on a warm summer's day. Yet, some barbecue sauces are actually laden with sugar and sodium. And slathering them all over that healthy grilled meat can instantly turn the meal into a diet disaster.

See, it's often hard to stick to one serving size. You're probably dousing your meat, veggies, and fish in that hearty, mouthwateringly tasty BBQ sauce without considering portion size, calories, and how the sauce may affect your body's water retention and blood sugar. Kind of the last thing on your mind when you're at a backyard hang, right?

Luckily, there are some BBQ sauces out there on the grocery store shelves that are lower in sugar, carbs, calories, and sodium. They'll spruce up that grilled patty on a bun the right way.

So, to best help you out when you're shopping, here are the best and worst barbecue sauce options. We rounded up some of the better-for-you picks, and which bottles are the biggest diet doozies you'll want to avoid. While you're making better choices, be sure to stock up on The 7 Healthiest Foods to Eat Right Now. 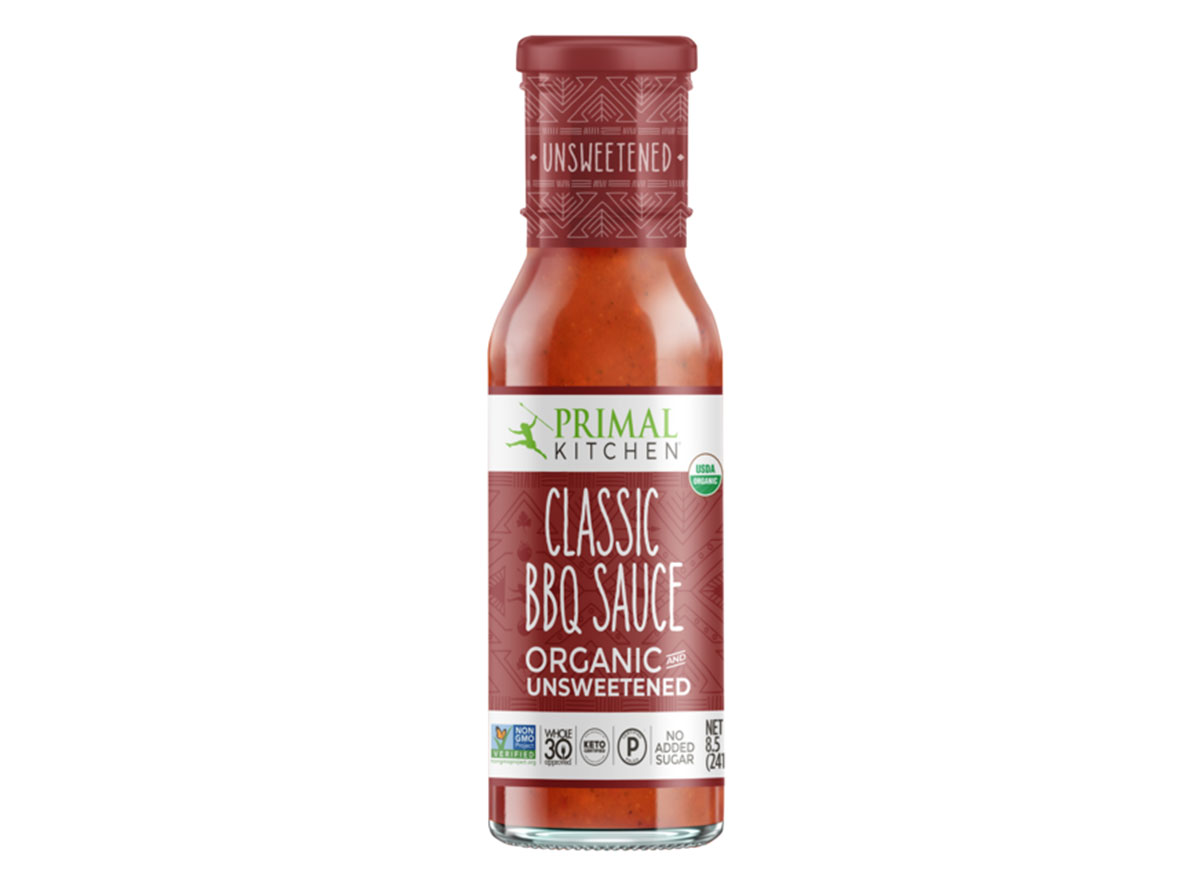 "Most BBQ sauces on the market are packed with fat and sugar to enhance the taste and texture. But this organic BBQ sauce option contains little to none of either of those detrimental ingredients," says Trista Best, MS, RD.

With zero grams of fat and just 2 grams of sugar, you can be sure you're enhancing flavor without sacrificing your health. 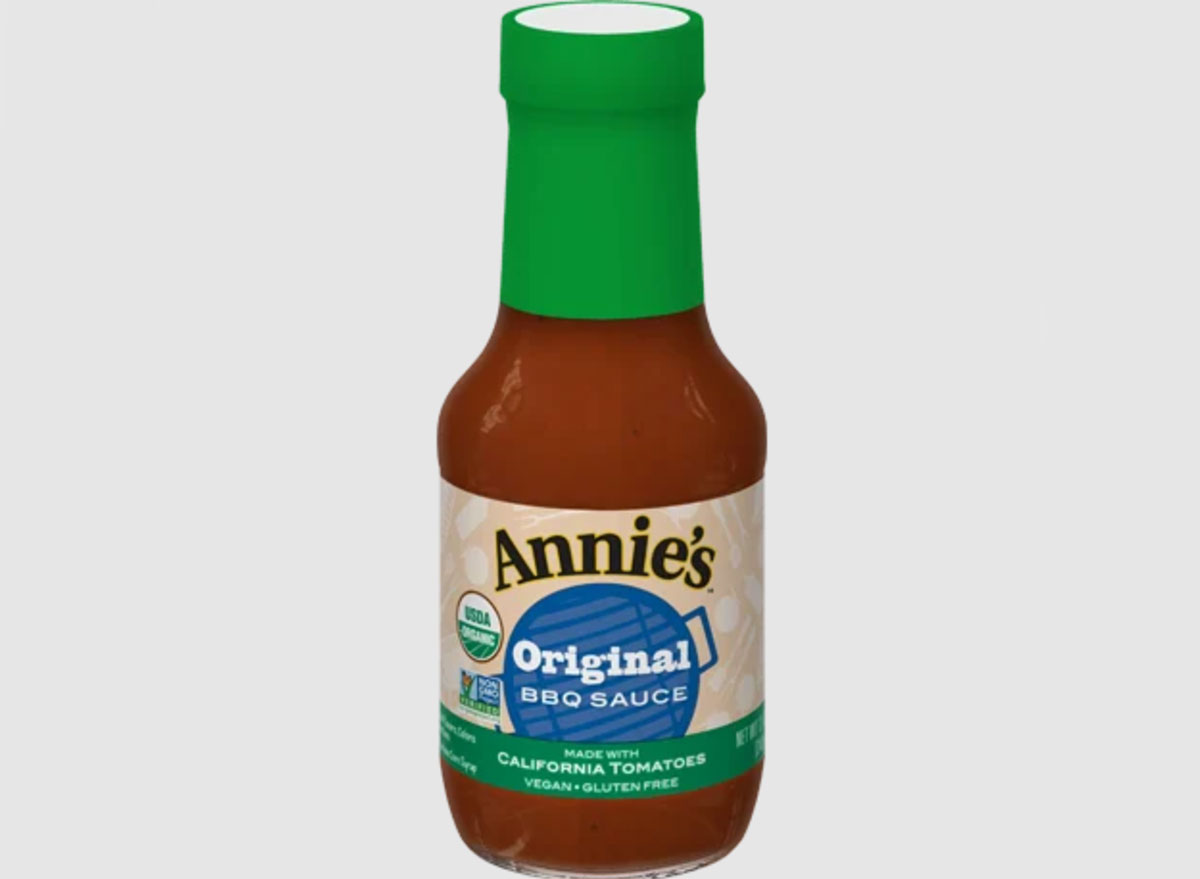 The fact that this sauce is made with organic ingredients is just one characteristic that makes it one of the better options on store shelves.

"Each ingredient is simple and easy to pronounce, which indicates natural ingredients rather than synthetic additives and preservatives," says nutritionist, founder, and author of The Candida Diet, Lisa Richards. From a nutritional standpoint, it is relatively low in calories per serving. Plus, it has only 1 gram of fat. Easy to see why it's a winner! 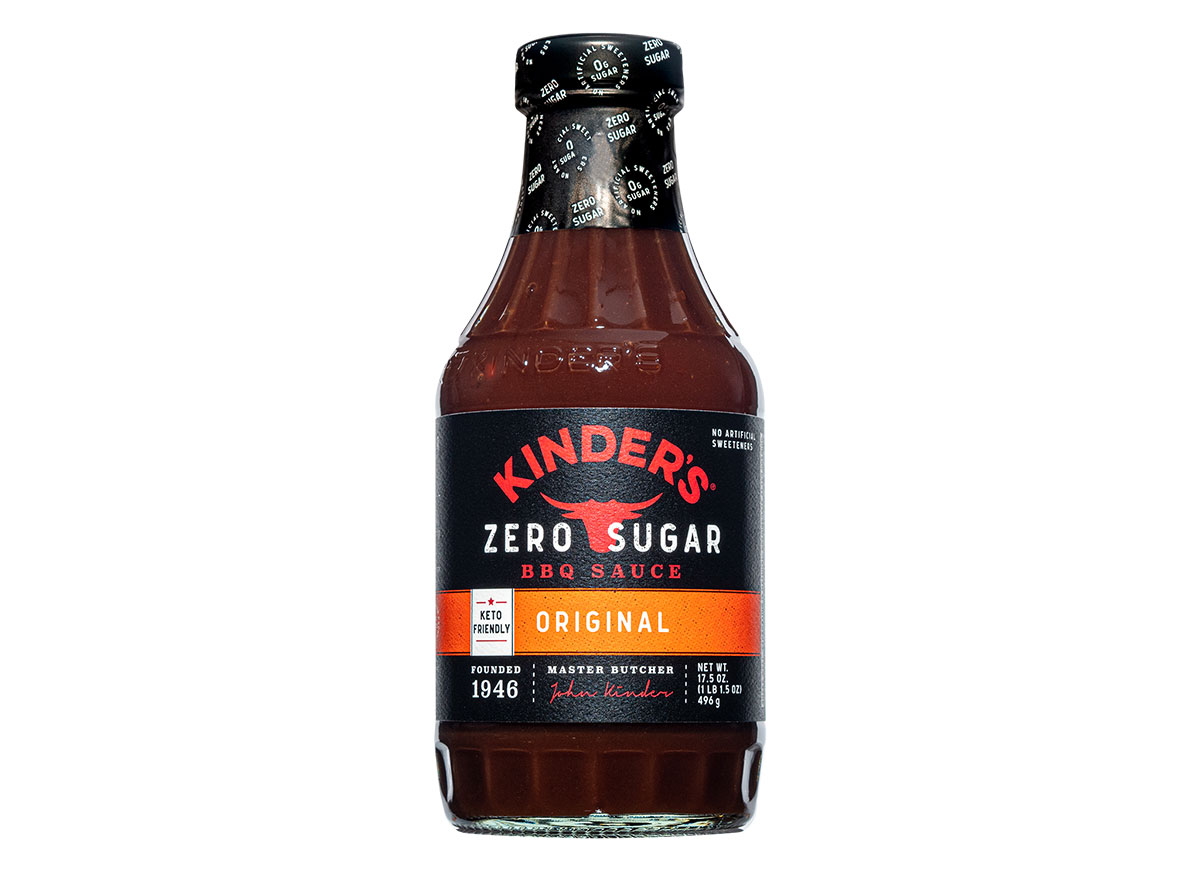 This sauce is a tasty, low-calorie, smoky option with only 10 calories per serving. There's no added sugar either, thanks to allulose.

"Allulose is a rare sugar found in raisins and figs and with 90% fewer calories than sucrose that won't increase blood sugar or insulin, so it's a win-win," says Lauren Harris-Pincus, MS, RDN, author of The Protein-Packed Breakfast Club. "I love it on shrimp, chicken, salmon, or a veggie or turkey burger. It's also great for pulled pork or chicken or to dress a cabbage slaw or grilled veggies." 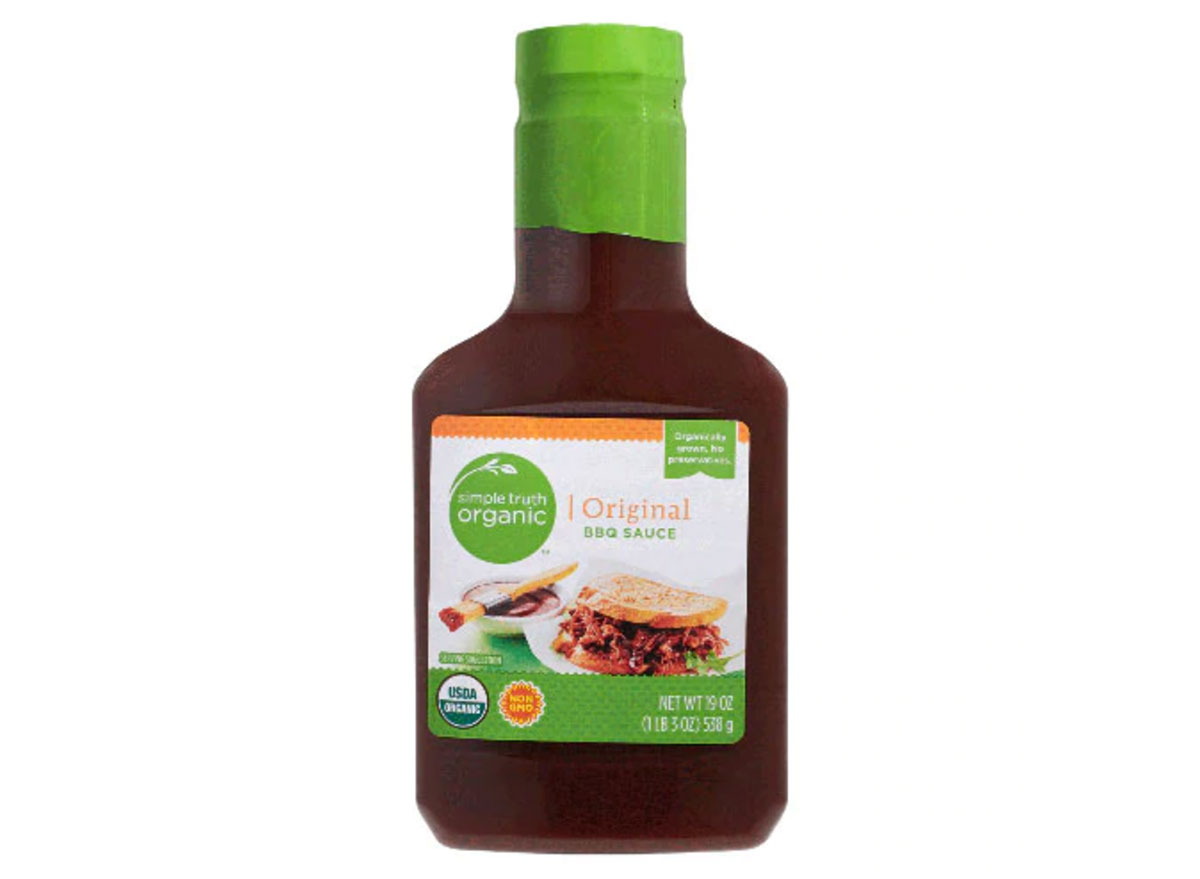 Just because a food is labeled organic, that doesn't always mean it's a healthier choice. But in the case of Simple Truth's BBQ sauce? It certainly does!

"This BBQ sauce is just 45 calories per serving and doesn't contain any concerning ingredients that are hard to pronounce. It is also non-GMO and naturally colored and flavored," says Richards.

This one is a bit higher in sodium and sugar, though, so be sure to stick to the serving size! 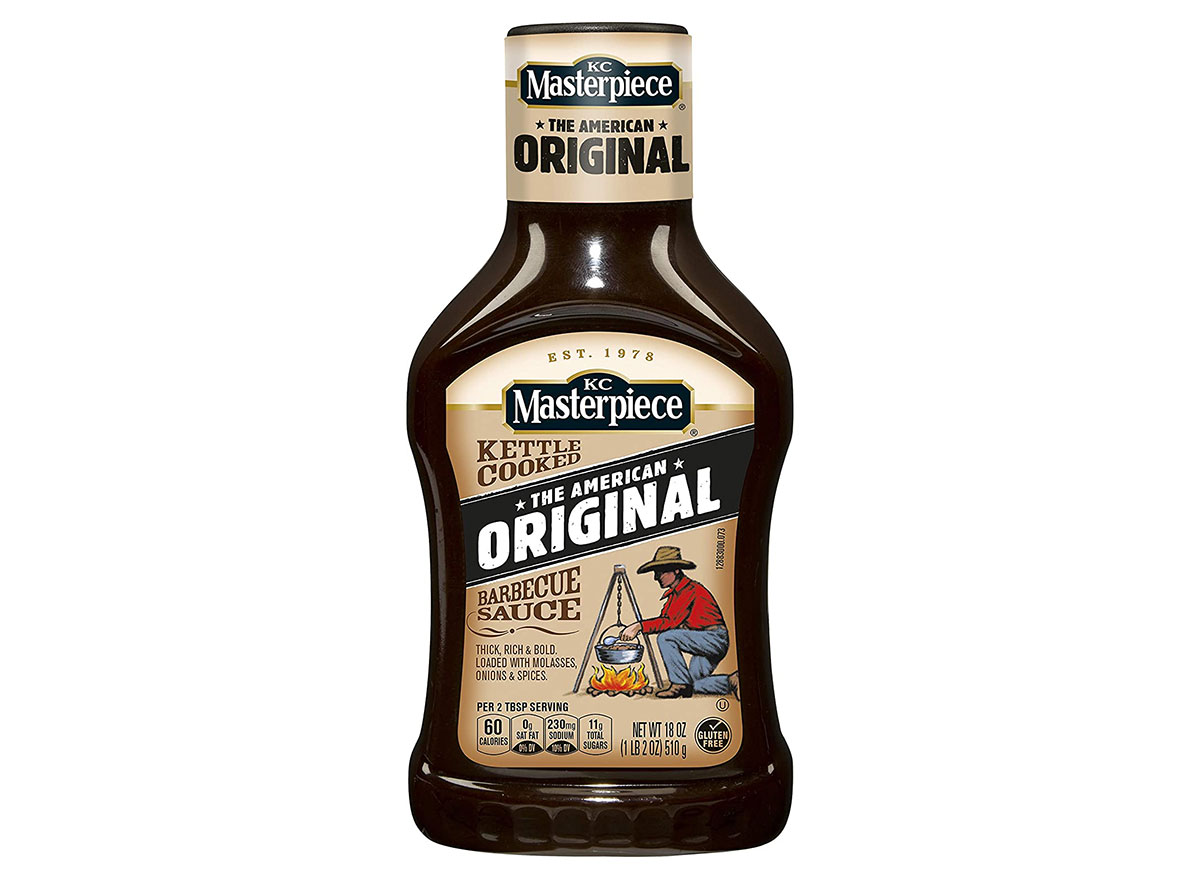 This sauce is full of added sugar, mostly from high fructose corn syrup.

"A 2-tablespoon serving has 12 grams of sugar, which is about half of the recommended amount of added sugar per day based on the American Heart Association's recommendations for women," says Harris-Pincus. You're better off steering clear of this one and looking for a sauce that's low in sugar. 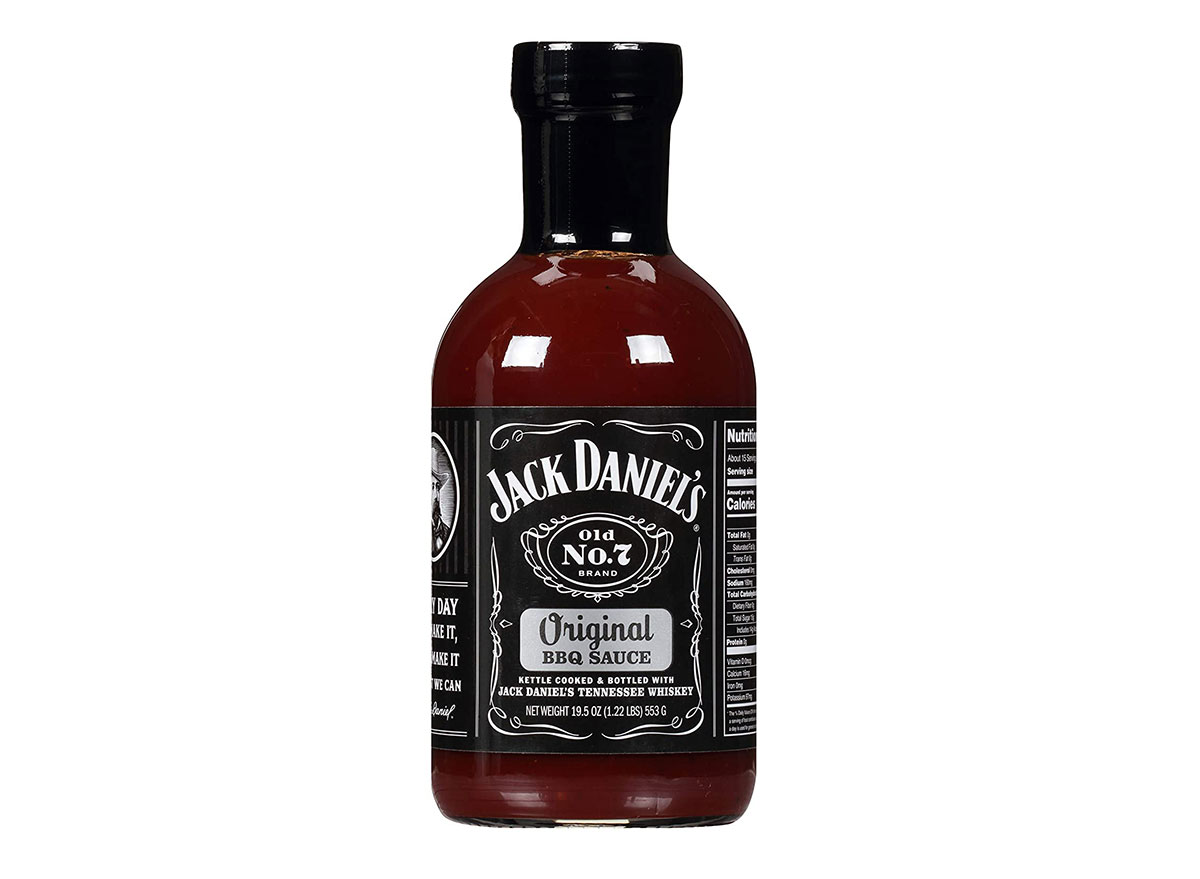 This BBQ sauce doesn't have high fructose corn syrup and is gluten-free, but this is where the good nutrient characteristics end.

"It is made with a high amount of added sugar, 14 grams, likely to create and keep the thick consistency and sweet flavor that high fructose corn syrup typically provides," Richards says. A two-tablespoon serving is a hefty 70 calories, too. 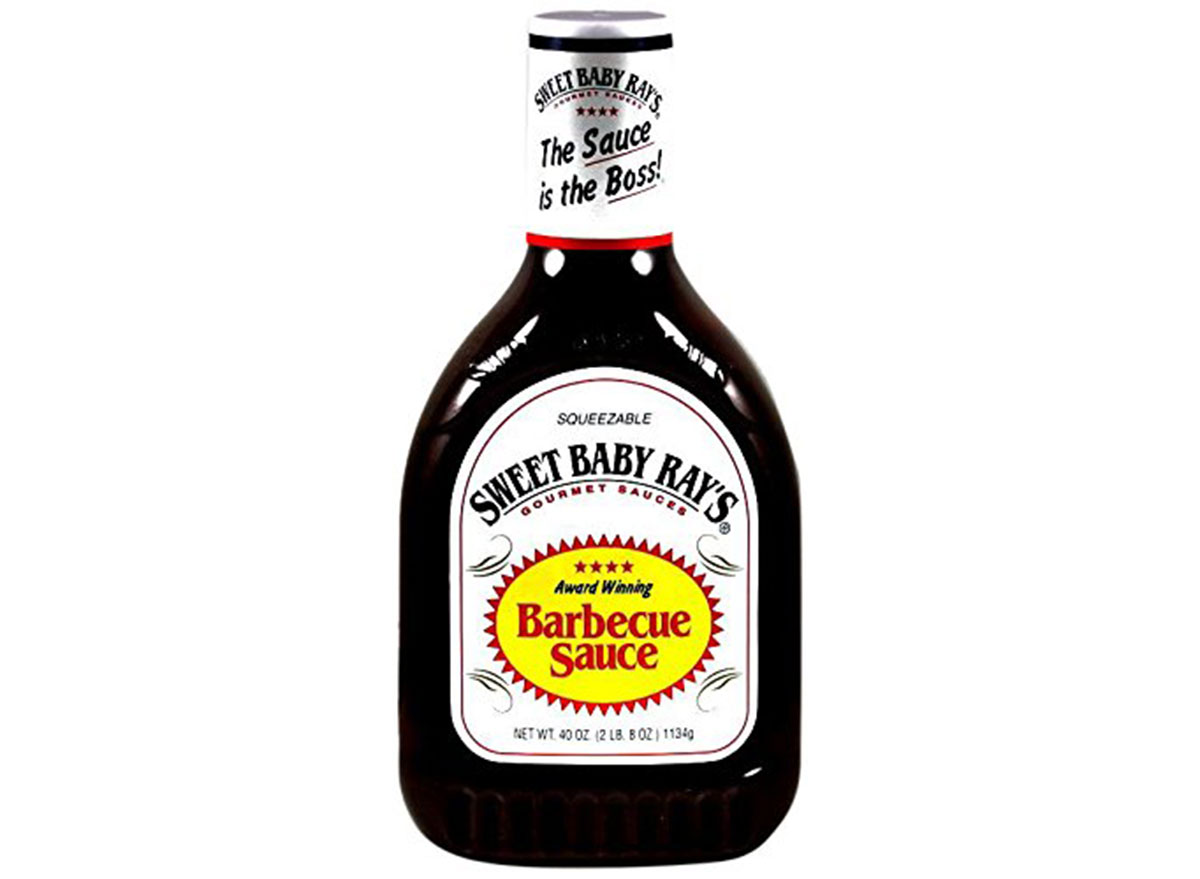 This BBQ sauce has both high fructose corn syrup and modified corn starch. So that means it's high in sugar and carbs, and lacking in real nutrition.

"Along with these ingredients, Sweet Baby Ray's has a large amount of added sugar in their BBQ sauce, which is known to lead to weight gain and poor gut health," says Best. 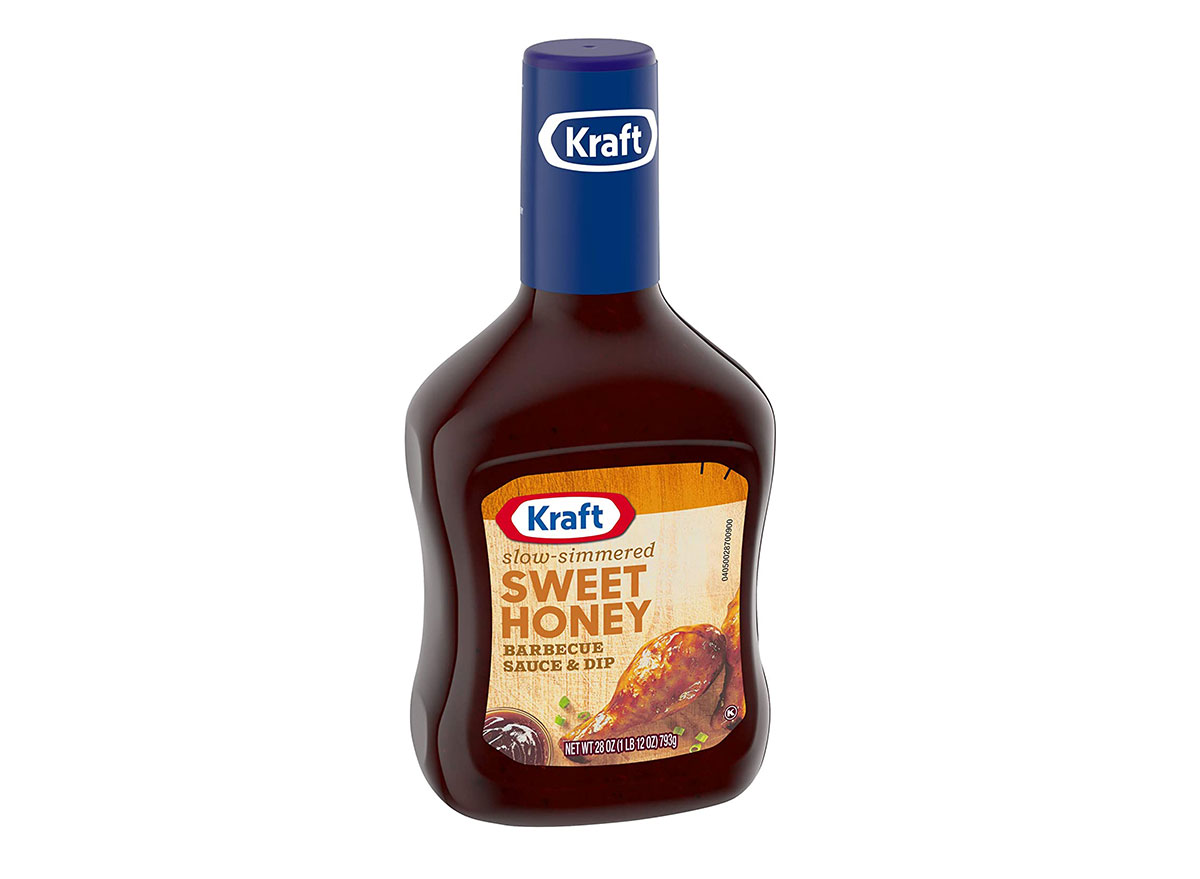 Kraft's BBQ sauce is likely one of the most popular options, as it has been tried, true, and dependable to provide a great flavor and texture. But it's time to switch things up. If you're looking after your health, that is.

"Unfortunately, it also provides a lot of unnecessary sodium and fillers, and at 340 milligrams of sodium, this BBQ alone provides a sizable portion of your daily sodium recommendation," says Richards.