The Healthiest Breads to Eat for Weight Loss, According to Dietitians

Yes, it's possible to still eat bread and stay on course with your health goals.
By Tiffany Gagnon | Jennifer Maldonado

When most people embark on a new diet, the first thing that seems to get the boot is the bread. But carbs shouldn't always be the dietary scapegoat. Dropping them from your diet will depress your taste buds, and it could actually prevent you from achieving lasting, healthy weight loss. And you don't have to cut out bread completely in order your reach your weight-loss goals.

Instead of cutting carbs completely, simply switch to one of the healthiest bread loaves you can buy in the bread aisle.

What are some benefits of bread?

To further prove the point that you don't need to toss bread to the side forever, you'll want to keep in mind some of the basic reasons why it can (and should be) a healthy diet staple, according to Eat This, Not That! medical board expert, Leslie Bonci, MPH, RD, CSSD, LDN.

How to choose the healthiest bread

Not all loaves of bread are created equal, and what makes the healthiest bread lies in the ingredients.

"I prefer breads made from whole grains, such as whole wheat and oatmeal, that are also low in added sugar, saturated fat, and sodium," says Elizabeth M. Ward, MS, RDN. "Look for 'whole" as the first ingredient in the ingredient list."

"Look for fiber in the bread, 100% whole grain, and low in fat," she says, adding the size of the slices plays a role as well, "so check the calories." Bonci suggests avoiding low fiber bread, bread with added sugar, and breads with high sodium if that is of health concern for you.

There are (surprisingly) quite a few bread options out there that aren't necessarily the best thanks to one ingredient: Sugar.

"Bread has a bad rap for being full of fillers and additives, and sometimes even sugar. When grocery shopping, it is important to keep your eyes out for ingredients such as partially hydrogenated oils, high fructose corn syrup, and soy—I never buy bread that has those ingredients on the label," says Kelly Springer, MS, RD, CDN.

Certain slices will offer your body minimal nutritional benefits while others have the opportunity to fill you up with fiber and energy-boosting whole grains. (Yes, there are best bread loaves for weight loss out there!) Not to mention, some varieties today go even further and pack healthy, satiating fats into the mix by adding nuts and seeds.

So to help you out next time you're food shopping, use this list of the healthiest bread options you can find at the grocery store, along with a few loaves you should leave on the store's shelves, too. And for more healthy tips, be sure to check out our list of The 7 Healthiest Foods to Eat Right Now.

The best healthy bread brands you can buy

With those criteria in mind, dietitians gave us their personal recommendations for the best healthy breads you can buy. 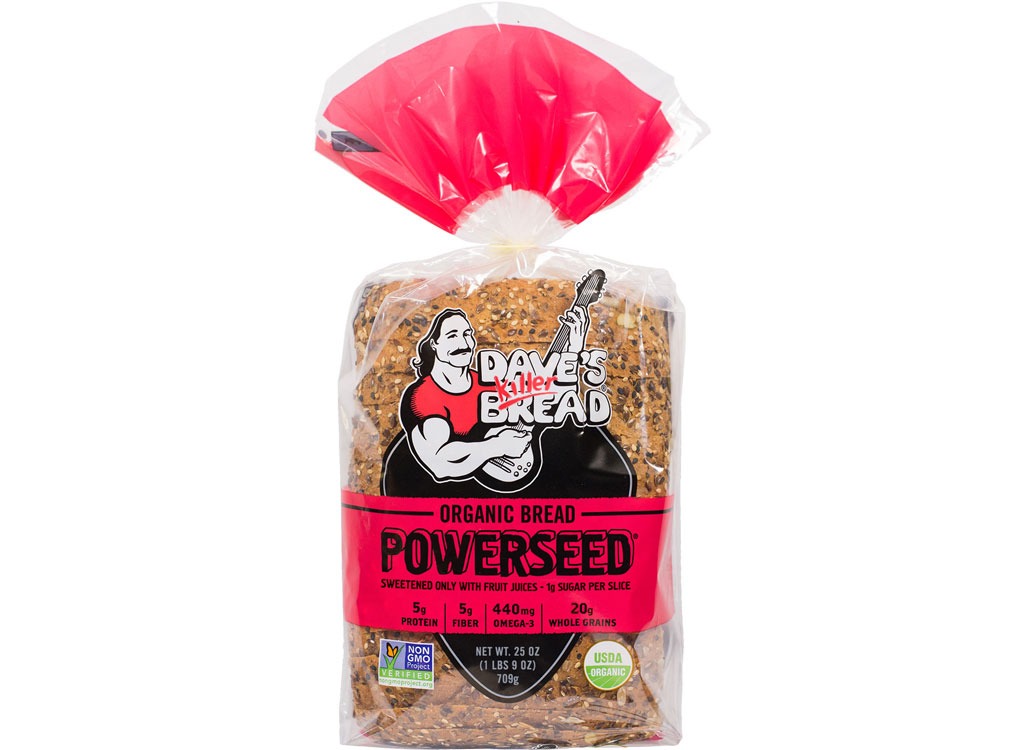 "I love Dave's Killer Bread. One of the best choices is the Powerseed," says Ward. "It has 4 grams fiber, 5 grams protein, only 1 gram added sugar, and no saturated fat."

If you're looking for smaller slices, though, Dave's Killer Bread still has you covered.

"Bread slices have become bigger in recent years. MyPlate specifies 1-ounce bread as a serving, but most slices are upwards of 1.5 ounces," explains Ward. "If you're looking for a healthy bread with a true serving, try Dave's Killer Bread Thin Sliced Powerseed. It has 40 fewer calories per slice, and still has 3 grams of fiber per serving (one slice), which is 1 ounce." Bonci is a fan of Dave's Killer Bread thin-slices as well. 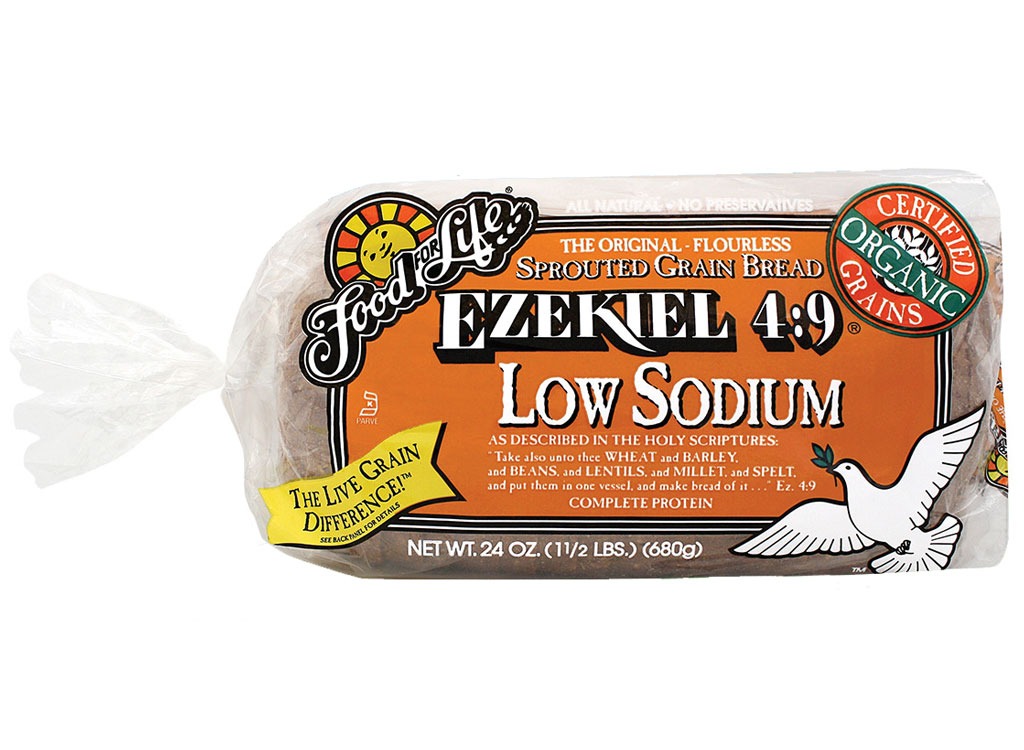 "First off, when you're reading the ingredient list you should be looking for the word 'whole grain', which means that the grain is still intact and hasn't been processed and essentially re-fortified," says Jessica Crandall, RDN, Certified Diabetes Educator, and National Spokesperson for the Academy of Nutrition and Dietetics.

The very first ingredient on this Ezekiel loaf is organic sprouted wheat, which will tip you off to the fact that it will probably contain more fiber and also offer more health benefits as a result. What kind of benefits are we talking? Whole grains have been found to reduce your risk for heart disease, diabetes and even assist weight management and weight loss. That's definitely what you're looking for in the healthiest bread. 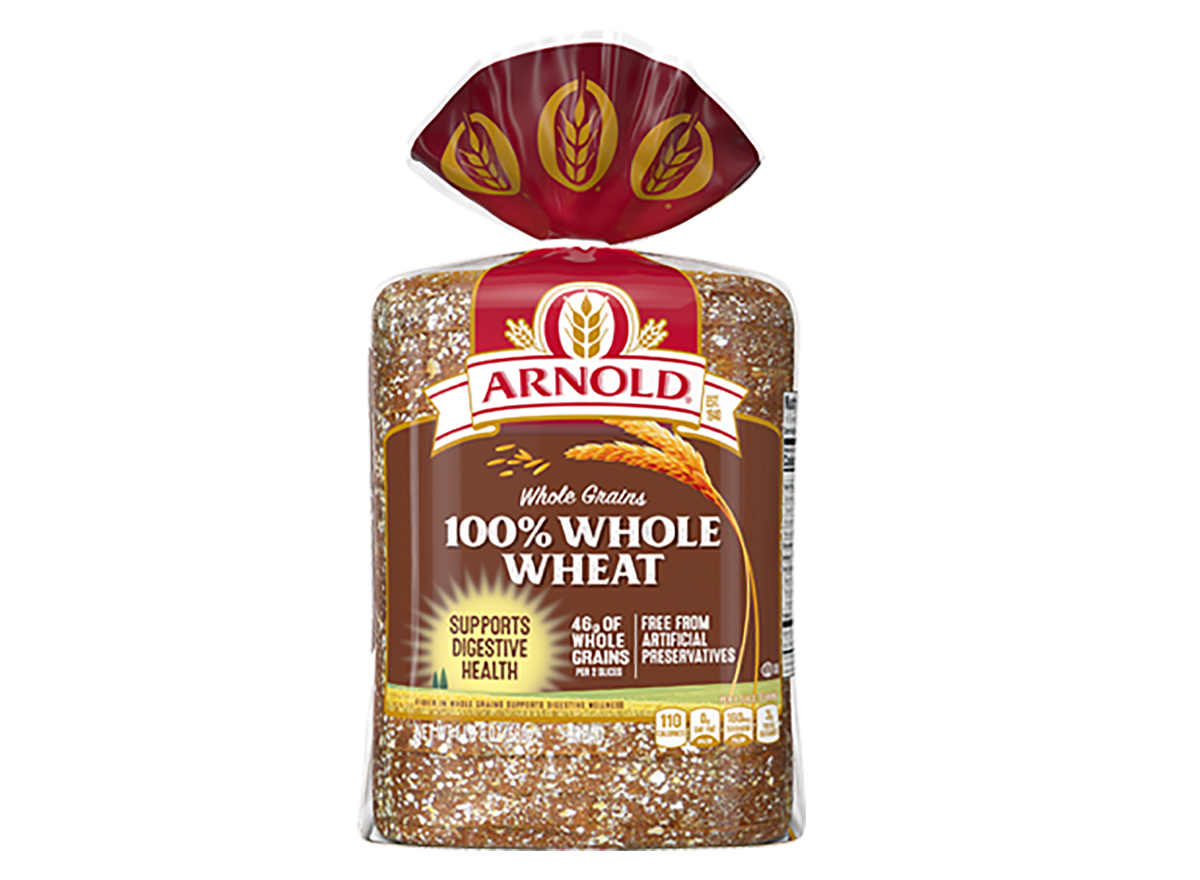 Of course, if you cut out an entire food group from your diet you will lose weight initially—but Crandall assures that it won't last. As long as you're watching portions and are mindful of calories, eating bread will not stop you from reaching your goals.

"I usually look for slices of bread to have less than 20 grams of carbs per slice (especially for my clients who are watching their blood sugar) and usually around 100-150 calories per slice," says Crandall. This Arnold loaf definitely fits the bill. 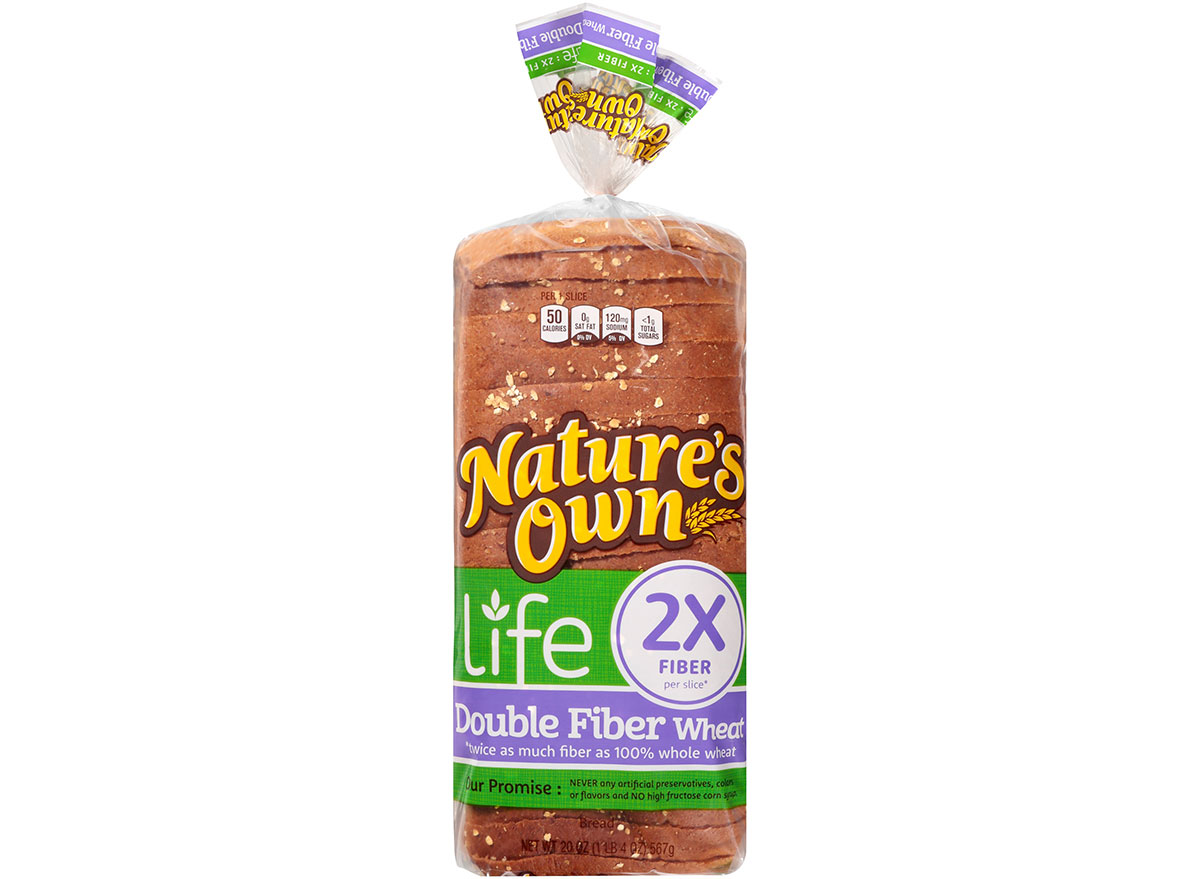 With only 50 calories per slice and 4 grams of fiber, this bread will fill you up and leave room (calorically speaking) to add on healthy spreads like nut butters or smashed avocado.

"There are a lot of people that are still very hesitant to consume grains period, which is the real concern. I think we're forgetting that there are nutritional benefits in these grain products because we have been a society based off of fear of carbohydrates, and that bread is going to make us gain weight. If you look at the research it's really pointing to the opposite," says Crandall. "You want to look for greater than 3 grams of fiber—greater than 3 grams of fiber is considered a good source and greater than 5 grams is considered an excellent source of fiber,"

See, you don't have to fear the bread, especially if you choose a more nutrient-rich option.

The worst breads you can buy

Taking the time to closely examine the labels on the breads in the grocery store is key to making sure you avoid adding any of the worst breads to your shopping cart.

"Terms like 'multi-grain,' 'made with,' 'wheat flour,' and 'sourdough' come to mind [when thinking of red flags on labels.] These terms are red flags but that doesn't mean the bread is necessarily a bad choice," Ward says. "For example, a bread could be multi-grain and made with all whole grains, but it also could be made with highly refined grains, too. 'Made with' usually refers to whole grain, which tells me that it's likely not 100% whole grain. Most flour is made from wheat so the term 'wheat flour' does not mean it's whole grain."

Keeping this in mind, here are some of the unhealthiest breads you should steer clear of next time you're food shopping. 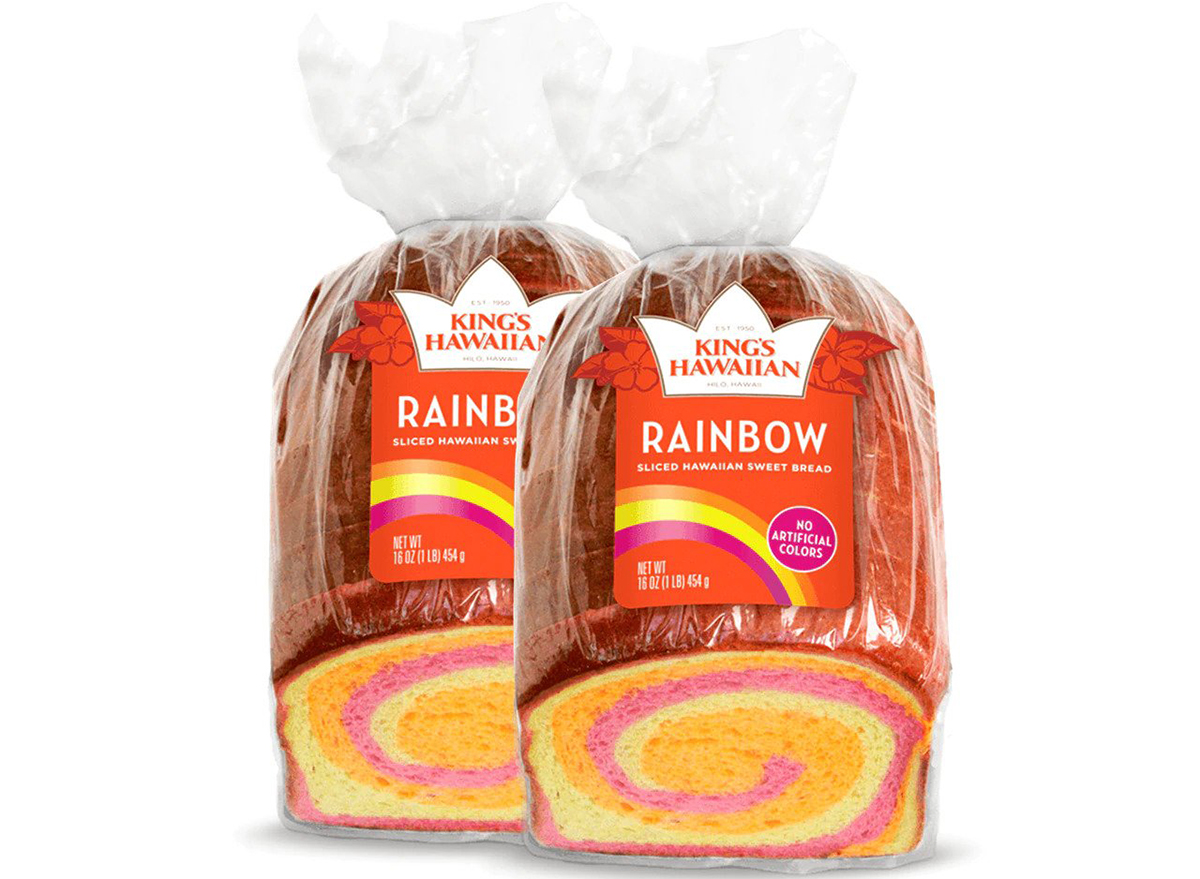 This bread might look nice, but the colorful hue should signal it's loaded up with sugar.

"This bread is not a good choice. It has 1.5 level teaspoons of sugar per slice," Ward says. "It's made with butter, so a slice has 8% of your daily allowance for saturated fat on a 2,000 calorie diet eating plan." 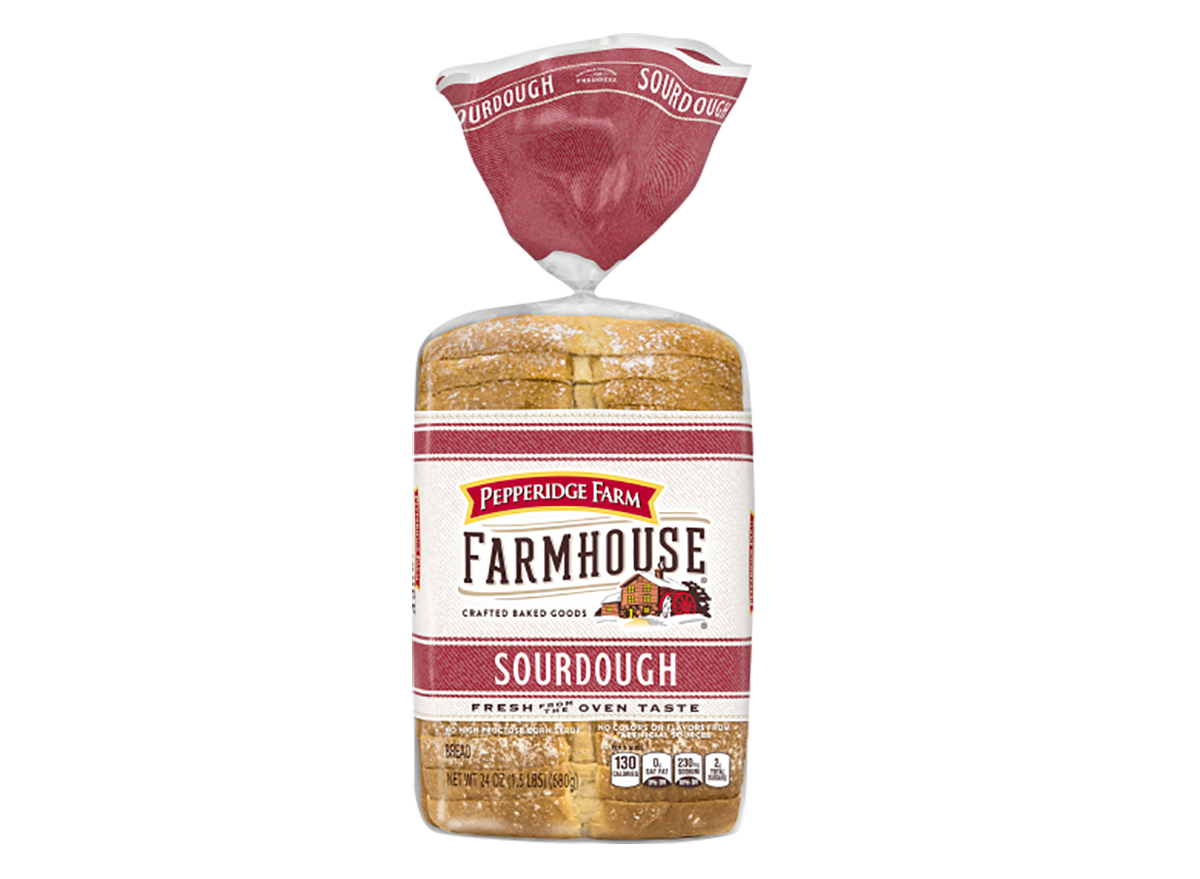 "Pepperidge Farm Sourdough bread has 10% of your daily sodium allowance in a single slice. If you're having a sandwich, that's 20% right there!" Ward says. "[With] sourdough, people mistakenly believe that because it's a fermented food, it's better for your gut, but that's not true because baking the bread kills the beneficial bacteria." 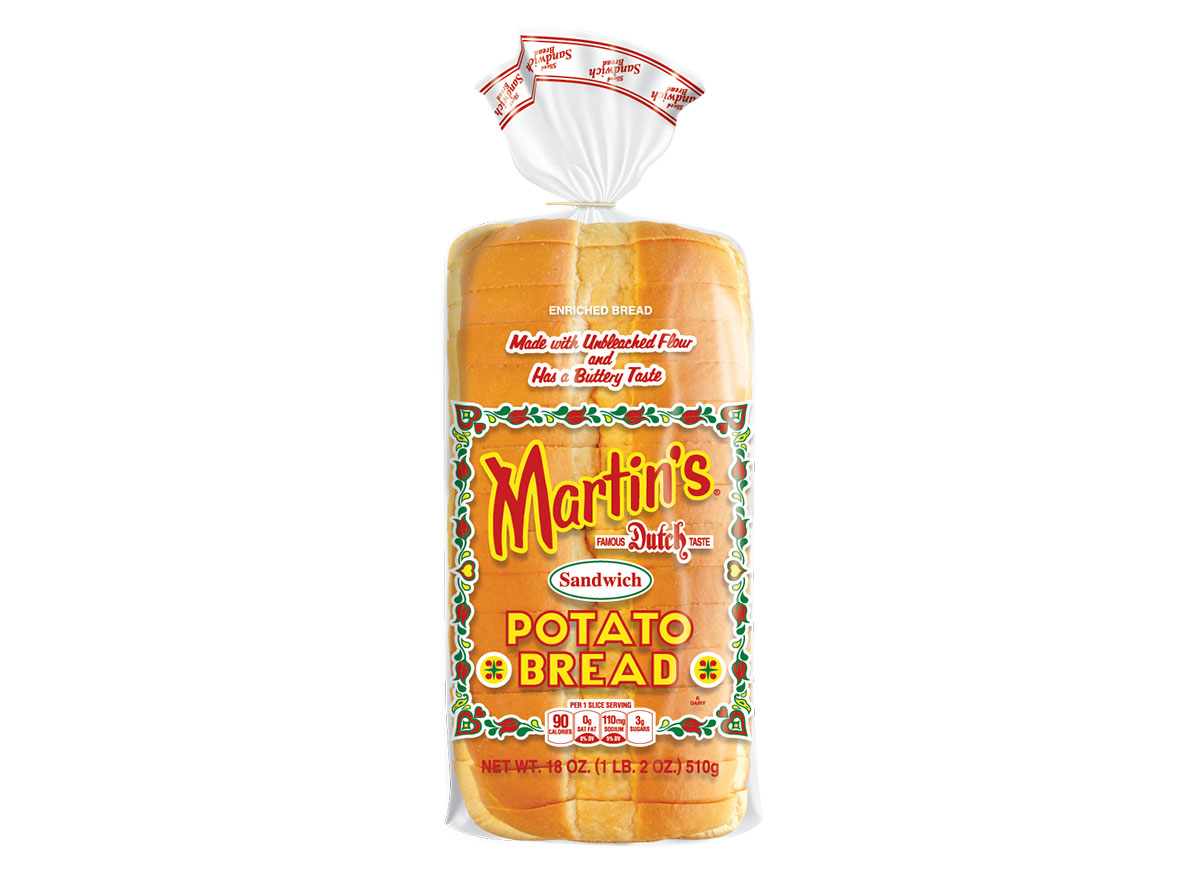 Potato bread may be a favorite thanks to its plush, soft texture, but the added potato doesn't add any extra health benefits. With one measly gram of fiber, this slice will quickly run through your digestive system, leaving you feeling hungry shortly after and causing you to eat more food than you truly need. Plus, as Ward points out, "unless it's whole wheat, potato bread is as refined as white bread." And speaking of… 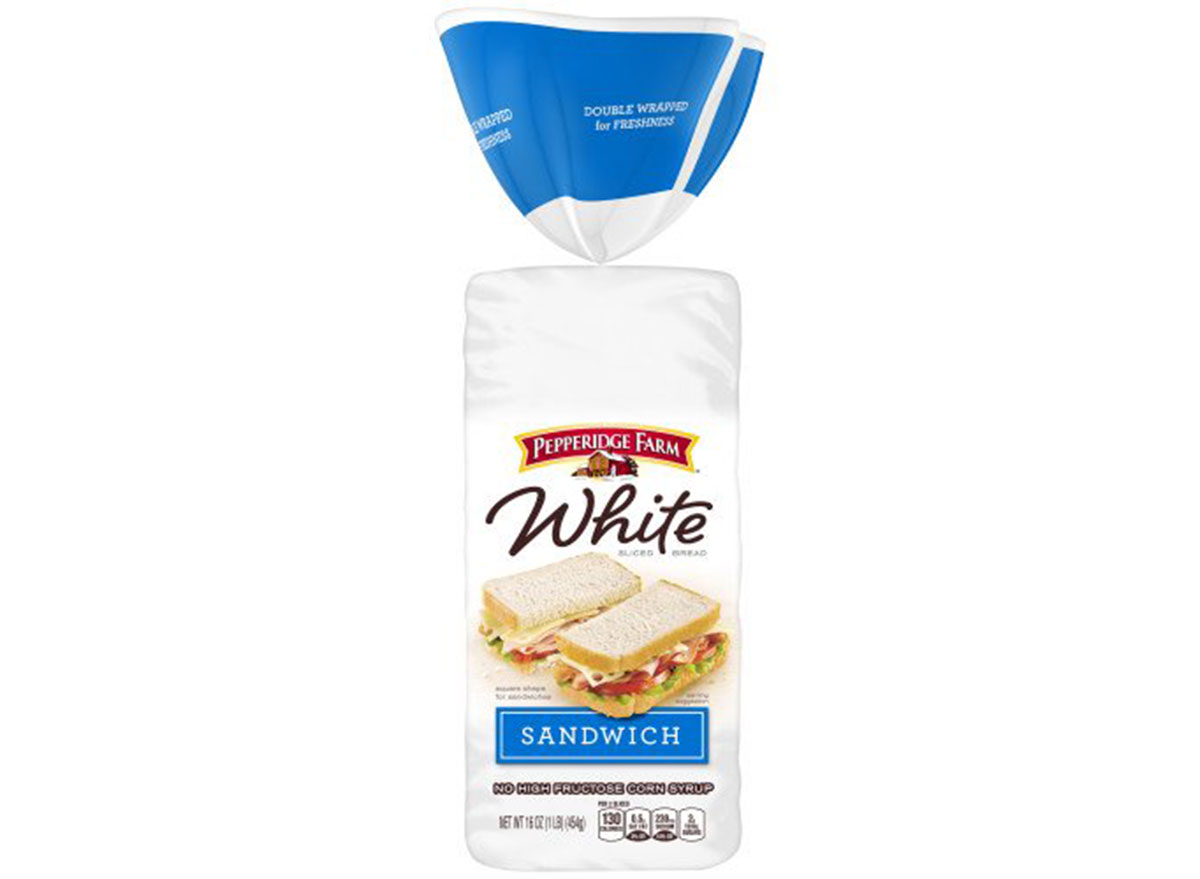 But now all is lost if you really don't think you can shake the white bread. Again, it just depends on which type of white bread you're looking at.

"You would think all white bread would be an unhealthy choice, but not quite—just the kind with excessive sodium and added sugar," explains Ward. "That's because the enriched flour that white bread is made from has added vitamins and minerals, most notably folic acid, which helps to prevent neural tube defects during pregnancy, and iron, which helps prevent anemia. It also has additional B vitamins. However, white bread is lower in fiber, but it's not devoid of it."

Just be sure you're staying away from the bread options that are loaded up with sodium and added sugar and are higher in fiber, and you're on the right track.