Their most popular item isn't technically a chicken wing.

When it was first established back in 1982, there weren't many places like Buffalo Wild Wings. But apparently, there was a national appetite for wings, as today not only are there 1,212 Buffalo Wild Wings locations across the United States, according to ScrapeHero, but there are also plenty more copycat restaurants, like Wingstop, Miller's Ale House, Hurricane Grill & Wings, and so on.

The chain was started by a pair of buddies who found themselves living in Ohio and missing the chicken wings they were familiar with from their native Buffalo, New York. Known as B-Dubs by its massive customer fanbase, the chain now has locations in every state in America (Texas alone has more than 100) and a number of overseas units as well.

But as popular as the chain has grown and as many diehard customers as it has, there are still a number of things to learn about the company that are less tasty than its famed wings.

Here are 10 secrets Buffalo Wild Wings doesn't want you to know. (Plus, if you're looking for some local wings, check out The Best Chicken Wings in Every State.)

Customer opinion of the chain is sliding.

In recent months, customers seem to have soured on Buffalo Wild Wings, with many people taking to social media platforms like Twitter and Reddit to express discontent with the company. Common complaints include slower service, higher prices, and inferior quality of the food itself.

The name used to be different.

When B-Dubs was first opened, the restaurant was called Buffalo Wild Wings & Weck, the "Weck" referring to a roast beef sandwich served on a kummelweck roll that is also popular in Buffalo, according to Delish. But the sandwich did not sell well— while the wings did—so the owners soon dropped the weck from the menu and the name, sticking with the rubric we know today. And yes, the weck is why the place is often called BW3.

The most popular menu item is not a chicken wing.

Buffalo Wild Wings sells a lot of chicken wings to be sure, but chicken wings are not the top-selling food on the company's menu. That honor goes to the boneless wings, which have outsold traditional wings for more than half a decade now, according to Mashed.

As we said, the boneless "wings" are not actually wings.

Remember how we talked about that best-selling product at Buffalo Wild Wings being the so-called "boneless wings?" Well, those aren't chicken wings at all. According to The Counter, those are simply pieces of chicken breast meat cut into strips, coated, and deep-fried. It's misleading to call them wings when in fact they are simply chicken nuggets or, at best, chicken strips.

According to Restaurant Business Online, in the year 2017, facing serious financial troubles, Buffalo Wild Wings began to look for someone to buy it. And that someone, who snapped the company up in early 2018, was Roark Capital, also the owner of the fast-food company Arby's, which has been pegged as one of the least respected fast-food chains, via Slate. (Though to be fair, Arby's reputation has been improving.)6254a4d1642c605c54bf1cab17d50f1e

The company has been accused of racism multiple times.

Many former Buffalo Wild Wings employees have complained of being treated unfairly due to their skin color, according to Mashed. And what's perhaps even worse, even customers have reported discrimination issues, such as a group of black diners who were apparently moved to not sit near some white regulars at one location, and a customer who was apparently sprayed by a guard with pepper spray when he entered a restaurant to pick up an order.

Employees usually have to pay for their uniforms.

Buffalo Wild Wings only gives their employees one branded uniform shirt, the shirt servers are required to wear, says Mashed. That means either doing daily laundry when someone has back-to-back days on the books or else means the waiters and waitresses have to lay out their own money to buy a second and third shirt. Because showing up dirty is also not allowed.

Almost none of the food is healthy.

It's, of course, no surprise that fried wings slathered in sauce and dipped in creamy dressing—or fried pickles, fried mozzarella sticks, greasy burgers, and so on—are hardly health foods, but the extent of the unhealthiness of Buffalo Wild Wings' food is still impressive in the pejorative sense. For example, according to HealthLine, a large order of the traditional wings with a spicy garlic sauce packs in a staggering 1,460 calories, 86 grams of fat, and 3,450 milligrams of sodium. A large boneless wings with Thai curry sauce? That nets you 2,040 calories, 133 grams of fat, and a sadistic 7,050 milligrams of sodium. 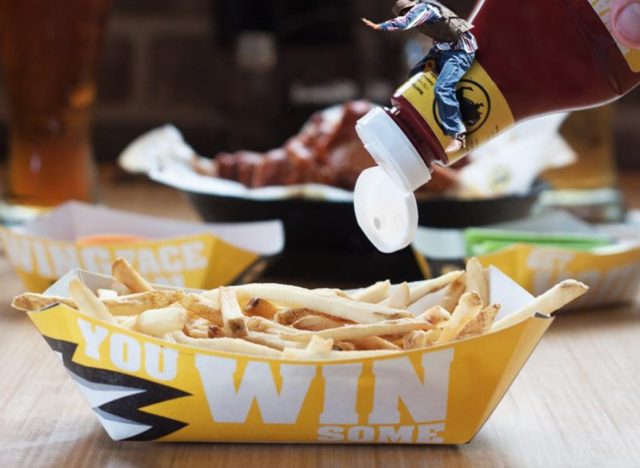 According to numerous employees who reported in on the kitchens at Buffalo Wild Wings restaurants, most of the "cooking" that takes place there consists of deep frying and microwaving foods, many of which are stored frozen for extended periods of time, via Mashed. And often prepared foods sit under warming lamps for long stretches of time before they are served.

A previous version of this article was originally published on December 10, 2021.

Steven John
Steven John is a freelancer writer for Eat This, Not That! based just outside New York City. Read more about Steven
Filed Under
Fast Food // Foods To Avoid // Restaurant Chains