Restaurant chains are getting creative when it comes to appealing to customers.

Restaurant chains not only are often easy-to-find and affordable, but they're also pretty well-known for being convenient. Whether you need a quick workday lunch or are looking to pick up dinner for your family in a pinch, restaurant chains can help get the job done, and done fast.

However, in recent years, the goalposts for convenience keeps moving. With the advent of mobile food ordering apps and 15-minute grocery delivery, people have now become used to spending the least time possible figuring out meals. Because of this, companies have had to up their game when it comes to speed, convenience, and quality—long drive-thru lanes don't stand a chance, and waiting for more than a few minutes for orders just doesn't fly anymore.

To help appeal to, as well as keep customers, restaurant chains are getting more creative each year. From nixing dining rooms to dreaming up two-story restaurant locations that have four drive-thru lanes, here are 8 clever new concepts that fast-food chains designed to stay relevant in 2022.

RELATED: McDonald's Is a Testing a Futuristic Drive-Thru Concept, But It Isn't As Cool as Taco Bell's

If you rather not interact with someone while picking up your lunch then we have good news for you: Subway has been expanding its automated vending machine fridges. These interactive, unattended smart fridges allow customers to purchase a Subway sandwich during any time of the day with just a touch of a button (that is then UV-C light sanitized after every transaction). Its first location was installed at the University of California San Diego in September, and received positive feedback from students. Soda vending machines, candy vending machines, and now Subway vending machines—what will they think of next?

Make sure you have your debit or credit card on hand when visiting your local Wingstop—soon you may not be able to pay with cash. In February 2022, the chain rolled out a new restaurant concept that ditches the dining room and puts the focus on digitization. This means that all menus are accessed via QR codes and cash is a thing of the past. So far, this new kind of Wingstop experience only exists at their prototype store in Dallas, TX, which makes us wonder if this new way of doing things will stick—only time will tell.

Taco Bell's "Taco Bell Defy" location, which opened up this past June in Minnesota, takes drive-thru dining to a whole new level—literally. Equipped with four drive-thru lanes, a two-story restaurant, and a vertical lift that transports orders straight from the kitchen to the customer, Taco Bell Defy's goal is to create a 2 minute, or less, drive-thru experience. So far the chain seems to be reaching this lofty goal, according to one writer at The Washington Post.

Good news—picking up your mobile app order at Chipotle may get a whole lot faster in the near future. This is because the chain decided this year to make their "Chipotlane", a drive-thru pick-up window designated only for mobile app orders, the new norm.

Just last month, the brand opened its 500th Chipotlane and will continue to integrate it into most new restaurants going forward. And it makes sense as to why—this handy lane has proven to be quite profitable. According to a press release from July 2022, Chipotle recorded a 17% increase in revenue during the year's second quarter, which translates to roughly $2.2 billion.

Panera Bread, the beloved chain that is known for its fresh baked goods and delicious bread bowls, is proving that sometimes bigger isn't always better. Recently, the restaurant introduced its compact digital-focused shops, which are up to 40% smaller than traditional Panera Bread locations. The brand reports that these new spaces are designed with limited seating, which will help employees focus more on filling to-go orders, in turn, making for a better customer experience.

The weekday Sweetgreen lunch rush may become a bit easier to handle due to the popular salad brand's introduction of drive-thru lanes. On November 15th, the fast-casual restaurant launched its first drive-thru concept, Sweetlane, which is exactly what it sounds like. Although the concept is new, the brand has been toying with the idea for years.

Pepsico, the company behind many soda and chip brands, is venturing further into the digital realm with its expansion of PepsiCo Foodservice Digital Lab, a consultancy that makes digital opportunities a reality in the food industry. On its "to-do list"? Create more virtual brands and ghost kitchens.

No, ghost kitchens aren't creepy spots where paranormal activity occurs, but instead commercial food prep spaces that focus on delivery order formatting as opposed to, say, dine-in customers. The brand is hoping to help guide more restaurants into this new frontier as they believe it can help cut down costs while also generating more revenue through delivery orders. 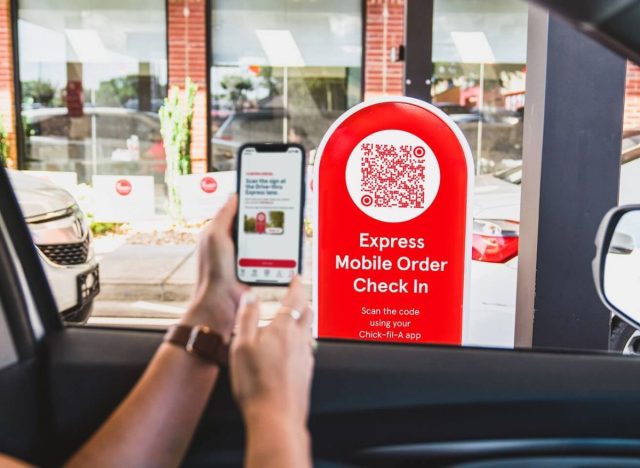 What's worse than hangry customers? Hangry customers sitting in a backed-up drive-thru lane. To help remedy its issues with drive-thru bottlenecking, Chik-Fil-A has recently announced its "Drive-Thru Express" concept, which allows customers to pick up their Chik-Fil-A mobile app order from a special mobile order-only window. The brand is hoping this new format will take some of the pressure off of its regular drive-thru windows.