Eating the right foods is one of the most effective ways to lower—or maintain healthy levels of—your cholesterol. Here's what you should stock up on.

Have you ever thought you could reduce your high cholesterol levels simply by not eating foods that contain cholesterol (like eggs)? You're not alone.

We aren't saying that changing your diet won't help you reduce your numbers. Eating the right foods is one of the most effective ways to lower—or maintain healthy levels of—your cholesterol. So besides exercising more, cutting out refined sugars, and steering clear of foods high in saturated and trans fats, simply incorporate the foods below into your weekly routine. Wondering which foods to avoid? Start with these common foods that raise your heart attack risk.

Before we go into our list of foods, here's a general review of what types of cholesterol are found in your body:

Think—Lazy. "Bad" LDL cholesterol deposits excess cholesterol and fat molecules into your blood (rather than to your liver), leading it to build up in your arteries. When your arteries become blocked—what's known as atherosclerosis—it puts you at higher risk for heart attacks and stroke. What you may not know is that the size of LDL particles matters as well. And it turns out, bigger is better: "small, dense LDL" particles confer a higher risk of heart disease than "large LDL" particles. So even some foods that raise overall LDL levels may actually be enlarging the small, dense LDL, which actually slashes the risk of cardiovascular problems.

Not all carbs will shatter your weight loss goals. This nutrient-dense, fiber-rich cereal grain is loaded with the cholesterol-lowering, soluble fiber beta-glucan. Just three grams of beta-glucan has been shown to reduce LDL cholesterol levels from 5 to 10% and thus reduce your risk of coronary heart disease. The same fibers that cause your oats to double in size overnight, beta-glucans lower bad cholesterol by forming a layer in the small intestine that blocks cholesterol from entering your bloodstream, according to a review in the journal Food & Function. Check out these healthy overnight oats recipes for what-to-eat inspiration!

Eat your heart out! And by that, we mean you should nosh on veggies of the same ruby red color, like radishes! Their red hue is due to anthocyanins, a group of phytochemical compounds that has been shown to burn fat and reduce inflammation, insulin resistance, and bad cholesterol. In a Japanese study, rats fed radishes for three weeks showed reduced levels of bad cholesterol and insulin and a boost in good cholesterol. Use them as a salad garnish, taco-topper, or eat them whole as a high-fiber, belly-filling snack.

Thanks to quinoa, ancient grains have won a place at many Americans' tables. But don't limit yourself to just quinoa; why not check out kamut as well? Native to the Middle East, kamut (or Khorasan wheat) is rich in heart-healthy omega-3 fatty acids, is high in protein (nearly 10 grams per cup), and has a good amount of fiber (21 grams of the satiating nutrient per cup). And according to a study published in the European Journal of Clinical Nutrition, participants who ate kamut wheat products in place of refined wheat reduced total cholesterol, LDL cholesterol, and cytokines, which cause inflammation throughout the body, over the course of eight weeks. Toss it into salads or enjoy it as a side dish on its own.

And if you're looking for more healthy food inspiration, be sure to sign up for our newsletter to get daily recipes and food news in your inbox!

You can thank tree nuts'—pistachios, walnuts, and pecans—high levels of plant sterols for their cholesterol-lowering ability. These cholesterol-mimicking compounds found naturally in plants can block the absorption of cholesterol from being absorbed into your bloodstream. Instead, they help to ship it out with your waste. Don't just take our word for it. When UCLA Center for Human Nutrition researchers gave one group of participants pretzels and the other group an equal-calorie portion of pistachios for an afternoon snack, the pistachio group was able to reduce their BMI by a point (while the pretzel-eating group stayed the same) and improved their cholesterol and triglyceride levels over 12 weeks. Pistachios will also help you to bulk up—check out these 15 Nuts Better Than Protein Powder. 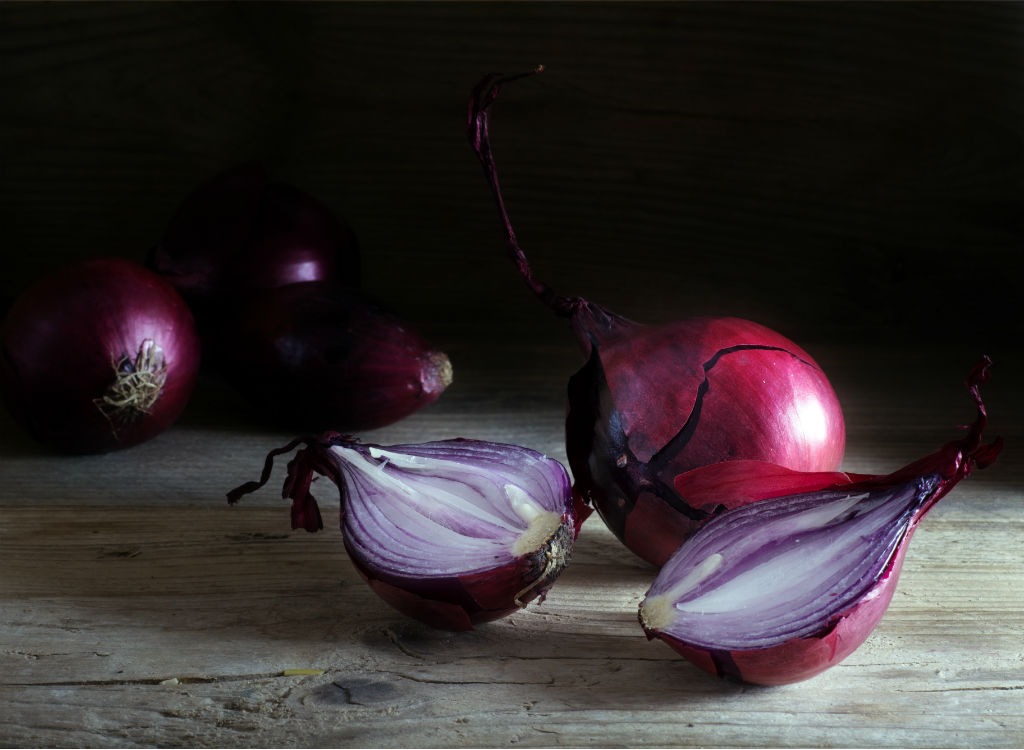 Onions are the unsung heroes of cardiovascular health. Thanks to their bioactive sulfur-containing compounds, the culinary staple can help lower cholesterol, ward off hardening of the arteries, and help maintain healthy blood pressure levels. According to a study published in the British Journal of Nutrition, onions may lower cholesterol by decreasing your body's synthesis of the compound as well as increasing conversion of cholesterol to bile acids. Onions are easy to throw into just about anything—just make sure to heat them up first. The same study found that heat-treated onions were more effective at lowering cholesterol compared to raw onions.

Don't overlook this tart fruit. The citrus can help with everything from keeping high blood pressure at bay to lessening the appearance of wrinkles. It doesn't just end there; University of Florida researchers found that grapefruit's pectin could lower total cholesterol and drop your ratio of LDL to HDL cholesterol. Consider digging into half of a grapefruit before your morning oatmeal or slice a few segments on top of your starter salad.6254a4d1642c605c54bf1cab17d50f1e

Now you'll know why we sing the praises of beans for being good for your heart! Lentils—as well as all pulses, like chickpeas, peas, and beans—are packed with cholesterol-lowering soluble fibers. In a recent review of randomized clinical trials published in The Canadian Medical Association Journal, researchers found that eating just three-quarters of a cup of cooked legumes every day could reduce LDL levels by about 5%, compared to similar diets without them. That five percent reduction in LDL is also associated with a five to six percent reduction in heart attacks and other major cardiovascular events, according to the researchers. The benefits don't stop there. Because lentils contain some of the highest amounts of protein (nine grams per half cup serving), they also make a great replacement for meat protein that can contain high levels of cholesterol-raising saturated fats.

Need another reason to try out your new favorite avocado recipes? How about this: the fatty fruit is rich in heart-healthy monounsaturated fats that can help lower cholesterol levels and decrease risk for heart disease when consumed in place of saturated or trans fats. Not to mention, the avocado is a powerful hunger squasher, so you'll be less likely to eat cholesterol-raising foods (like sugary treats) after you've eaten some avo. Case in point is a study published in Nutrition Journal, which found that participants who ate half a fresh avocado with lunch reported a 40% decreased desire to eat for hours afterward. Just how good are avocadoes?

Who knew that when you pulled out your phone to Google "how to get rid of bloating," you'd find both a solution to your troubled tummy and your high cholesterol levels? You heard us right. Famous for aiding in digestion, ginger has also been found to help reduce total cholesterol, LDL, and very low-density lipoprotein (VLDL) levels when subjects consumed three doses of three-gram ginger capsules. Researchers attribute ginger's health benefits to gingerols, compounds that are antioxidant, anti-inflammatory, and antibacterial. Get the benefits by grating some fresh ginger into warm water with a squeeze of lemon to make some tummy taming tea.

We know you didn't really need another excuse to nibble on that chocolate bar, but we'll give it to you anyway. A review published by researchers from Brigham and Women's Hospital and Boston Veterans Affairs Healthcare System discovered that cocoa products, including dark chocolate, may be able to lower levels of LDL cholesterol and total cholesterol. The secret lies in the presence of cocoa flavanols, which previous studies have found to inhibit cholesterol absorption as well as the expression of LDL receptors. To reap the benefits, grab a bar that contains 70 percent or more cocoa solids or pure cacao powder, as these will have the highest amounts of flavanols.

Replace your morning joe with a cup of green tea to whittle your waist and ward off disease. What makes this hulk-colored elixir so powerful? It's packed with catechins: antioxidant compounds that blast through adipose tissue by revving your metabolism and relinquishing stored fat from fat cells. But that's not all—according to Harvard researchers, the antioxidants in green tea may also lower levels of LDL (bad) cholesterol and increase levels of HDL (good) cholesterol.

Apples are quite ap-peel-ing to those looking to get a handle on their cholesterol levels. Why is that? It's because apple peels are rich in a type of soluble fiber known as pectin—the same fiber you'd add to jams or jellies to thicken them up. Pectin helps your body excrete the bad cholesterol by latching onto it and guides it out of your digestive system.

We're highlighting this Korean fermented cabbage, but many other fermented foods (like sour beer, yogurt, pickles, cocoa, and sauerkraut) can also help lower bad cholesterol levels. The key here is the presence of Lactobacilli—a strain of lactic acid bacteria, or culture, that gives fermented foods their characteristic sour taste. A study published in the International Journal of Food Microbiology found that the specific strain in kimchi was able to lower cholesterol levels by preventing cholesterol from being picked up by your bloodstream.

Extra virgin olive oil is rich in cancer-fighting polyphenols and cardio-protective monounsaturated fats. And when it comes to looking lean, it's backed by some pretty strong facts. A study published in the journal Obesity found that an EVOO-rich diet resulted in higher levels of a fat-blasting hormone known as adiponectin than a high-carb or high-protein diet. As for cholesterol? An Italian study recently found that replacing corn oil with extra virgin olive oil was able to lower LDL levels in healthy individuals.

One of the hallmarks of a balanced diet is to have a good ratio of omega-3s to omega-6s. A 1:4 ratio is ideal, but the modern American diet is more like 1:20. That leads to inflammation, which can trigger weight gain. One of the easiest ways to upgrade your diet is by sprinkling some ground chia seeds or flaxseed into your overnight oats, on top of baked goods, or mixed into your smoothies. Animal studies suggest a chia-rich diet can lower harmful LDL cholesterol and protect the heart, and a study in The Journal of Nutrition found that when patients who were susceptible to cardiovascular disease ingested just 30 grams (about four tablespoons) of ground flaxseed daily, they could reduce circulating LDL cholesterol levels by 15 percent in as early as one month.

Spinach is one of the highest dietary sources of lutein—an antioxidant pigment found in dark green leafy vegetables and egg yolks famous for guarding against age-related macular degeneration. Now, research published in The Journal of Nutrition found that the carotenoid may help lower levels of LDL. The researchers speculate the anti-inflammatory compound helps your artery walls defend themselves against the clogging cholesterol. To reap the benefits, add half a cup of spinach to your morning weight loss smoothies.