Impossible Burger vs. Beyond Burger: What's the Real Difference Between Them?

Both of these plant-based meat alternatives may soon replace your beef burger, but which one should you choose?

Years ago, the only options plant-based folks had for grilling out were patties made from vegetables like black beans and sweet potatoes. While veggie burgers are pretty tasty—not to mention healthy!—they certainly weren't fooling anyone.

That's a far cry from 2019, where faux meat alternatives are so convincing they're even feeding carnivores. And the Impossible Burger and Beyond Burger are the stars of the show.

Beyond Meat's Beyond Burger and Impossible Foods' Impossible Burger were both launched in 2016. Since then, they've taken the nation—and even the world—by storm.

Both burgers are available at thousands of restaurants across the country. And they're even making fast food chains more vegan-friendly: The Beyond Burger can be found at Carl's Jr. and A&W, and the Impossible Burger is available at Burger King, White Castle, and Red Robin.

You can also grab the Beyond Burger in grocery stores: It's currently located right in the meat aisle, and the Impossible Burger is heading to grocery stores later this year.

Both of these burger options are praised by many for tasting like real meat—so much so that even meat lobbyists are worried: lobbyists are saying plant-based burgers are "95 percent of the way there" when it comes to tasting like the real thing.

But great taste aside, what's the real difference between Impossible Burger and Beyond Burger? Here's exactly what you should know about each of these trendy patties.

Nutrition of Impossible Burger vs. Beyond Burger

When it comes to the nutrition of both burgers, they have many similarities but also some key differences that play a role in which option comes out to be healthier.

The Impossible Burger is gluten-free, kosher, and halal-certified. The 4-ounce Impossible burger patty is lower in calories, fat, and sodium than its peer.

On the other hand, the Beyond Burger contains no GMOs, is soy-free, gluten-free, and kosher. Beyond Meat's 4-ounce patty is the lower-carb option—coming in at only 3 grams of total carbs vs. 9 grams—and contains 1 more gram of protein than the Impossible patty, at 20 grams vs. 19 grams of protein.

Both plant-based burgers are an excellent source of iron, serving up 25% of your daily value, which is significantly greater than the 10% DV of iron a regular 4-ounce, 80/20 ground beef patty contains. The Impossible burger gains one more edge on its competitor by containing twice the calcium.

What's the difference in ingredients?

Both of these burgers have changed their recipes since their initial releases to make the taste and texture even more indistinguishable from real beef. The Impossible Burger released a new version earlier this year, and the Beyond Burger did so just this week.

There is certainly overlap between the two's ingredient lists. Both use water, coconut oil, and starches.

While Beyond Meat decided to use beet juice extract and pomegranate fruit powder to get that meaty red color, Impossible Foods accomplished that by using soy leghemoglobin (a plant-based version of the compound that gives meat a red color).

Lastly, the food scientists at Impossible Foods noticeably prioritized micronutrient content by adding vitamins B1, B2, B3 (niacin), B6, B12, C, E, and zinc. B-complex vitamins are essential to proper energy metabolism. This addition is a huge benefit for the vegans and vegetarians who are likely opting for this plant-based meat alternative; vegans and vegetarians typically fall short on B vitamins—particularly B12—because they're more commonly found in animal products. Beyond Meat did not add these vitamins to their recipe.

What are the health benefits of plant-based meat alternatives?

It may be hard to imagine beef-like burgers that taste this good also come through with some health benefits, but both burgers deliver. To understand the benefits of eating plant-based burgers like those from Impossible Foods and Beyond Meat, you have to consider what you're replacing them with: red meat.

Red meat has been consistently shown to cause health problems. The most recent BMJ study of 53,500 women and nearly 28,000 men found increasing your red meat consumption by even a measly half serving per day was linked to a 10% higher risk of early death. The study also found eating other protein sources—including those from plants—could help you live longer, making these faux meat options a great way to get the taste you love without impacting your well-being.

Health benefits of the Impossible Burger:

The Impossible Burger is primarily made up of soy protein, and according to Amy Gorin, MS, RDN, owner of Amy Gorin Nutrition in the New York City area, the plant protein has some perks.

"Soy is a complete source of protein, which means it contains all the essential amino acids, which your body requires from food because it's not able to produce those amino acids itself," she explains. "Additionally, a recent review study published in The Journal of Nutrition and Disease shows soy protein may help lower cholesterol levels [by decreasing] 'bad' LDL cholesterol."

In addition to the soy protein, the ingredients in the Impossible Burger can also benefit your body in other ways.

"Through eating an Impossible Burger, you can get an excellent amount of satiating protein and a good amount of filling fiber," Gorin says. "You can also get many vitamins and minerals—including blood-pressure-helping potassium, folate—which is especially important for women of childbearing age—and bone-helping calcium. You get many other important nutrients, too, including iron, vitamin B12, and zinc."

Health benefits of the Beyond Burger:

While the old version of the Beyond Burger used pea protein as its base, the new "meatier" version uses three types: pea, mung bean, and rice protein.

"Pea protein has been found to be more satiating than certain other types of protein, including whey protein, per research in Nutrition Journal. Also, pea protein provides vitamins and minerals—this is likely the source of many of the nutrients in the burger," Gorin says. "The burger also contains rice protein and mung bean protein, additional vegan sources of plant protein that offer satiating and cholesterol-helping fiber in addition to protein."

Its well-rounded protein sources aren't the Beyond Burger's only perk: It also contains plenty of healthy fat as well.6254a4d1642c605c54bf1cab17d50f1e

What do people generally think about each burger?

Both burgers are constantly praised for their ability to resemble real meat, and some people can't even tell the difference between the two. 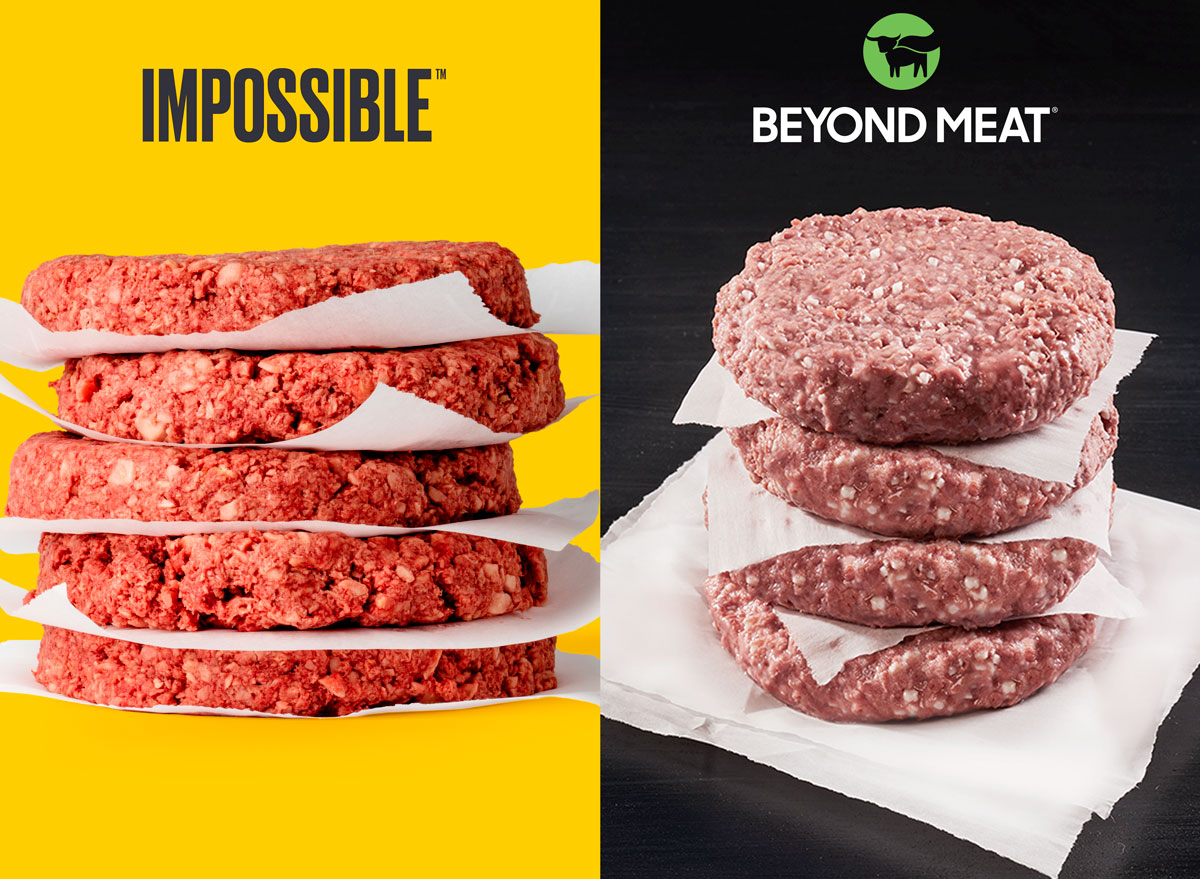 The Impossible Burger: Since the Impossible Burger is currently only available in restaurants (including in Burger King's new "Impossible Whopper"), you get a completely different burger depending on where you go and how they prepare it. No matter the location or method, the reviews always seem to be the same: Meat-eaters love the burger and say they can hardly tell a difference, and vegans and vegetarians say it's so realistic that sometimes it even grosses them out. It's that similar to real meat.

The Beyond Burger: While you can grab Beyond Burgers in restaurants, many people also enjoy cooking them at home since they're so accessible at popular stores across the country, including Whole Foods and Target. While some people said the initial version could have an off-putting smell and aftertaste, others completely disagreed. This new version—which has a bright red "now even meatier" tab on the packaging—doesn't have the same complaints. It's closer to real beef all-around with a meatier taste, texture, and smell.

How does each brand make their burger taste like real meat?

The Impossible Burger has a special secret ingredient that's the key to it cooking, smelling, and tasting like real beef: heme. While the essential molecule is found in animals, it's also found in plants, and that's where Impossible Foods gets it. Called soy leghemoglobin, it's made by taking the "DNA from soy plants and inserting it into a genetically engineered yeast." After fermenting the yeast, it multiplies and products a lot of heme, which is then used in the meat-like patties.

The Beyond Burger doesn't use heme, but it gets its meatiness from marbling—aka the white fat streaks you see in beef. But it's not real fat, of course: It's replicated using coconut oil and cocoa butter, which create a melt-in-your-mouth texture. Along with the three different types of protein and apple extract that turns them from red to brown as you cook them, the final result has all the tasty components of a beef patty, minus the beef.

Is one healthier than the other?

Both of these burgers have a taste that resembles real beef, but which one comes out as the healthier option? According to Gorin, both options have one drawback: "I don't love that these burgers are made with coconut oil, a source of saturated fat," she says. Aside from that, one still reigns supreme nutrition-wise.

"If you were choosing between these two burgers, I would go with the Beyond Burger," Gorin says. "The two burgers have a comparable amount of calories and sodium per four-ounce patty, but the Beyond Burger has less saturated fat and slightly more protein than the Impossible Burger. They both have similar amounts of fiber."

While the Beyond Burger wins overall nutritionally, both are still great at providing you with plenty of body-benefiting components.

All in all, taking a bite of either of these burgers will never leave you disappointed, whether that's in terms of taste, texture, or nutrition. Both options are easy to find, filled with ingredients that are much better for your health and well-being than traditional beef patties, and provide you with health benefits—including soy, which could help lower cholesterol levels, as well as hearty plant-based protein, fiber, and important vitamins and nutrients.

The next time you're craving a burger, grab a bun and one of these faux meat options. Whether you're a meat-eater looking to cut down on your meat consumption for your health or the planet, an animal-loving vegetarian looking for a great grilling alternative, or are just super curious about what all the fuss is about, one thing's for sure: you'll definitely be going back for seconds.