What is your all-time favorite cereal from childhood? Frosted Flakes? Cocoa Pebbles? Unfortunately, some of the most beloved kids' cereal have a common theme—they contain a lot of added sugar. Not all kids' cereals are packed with the sweet stuff though. There are actually several brands that make cereals that both kids and adults can enjoy that are nutrient-dense and even high in fiber and protein, both of which help make you feel full. You may even be surprised by a few of the ones on this list.

To separate the best cereals from the worst ones, we analyzed the sugar content that's in one serving of each cereal. We also factored in fiber, protein, and fat contents when necessary.

Now, see which kids' cereals are the most nutritious and which ones may as well be considered a dessert.

Cinnamon on toast is already a game-changer, but then you put it in cereal form and it's game over. This is one of our favorite kids' cereals, and as it turns out, it's not awful for you. The first ingredient listed on this product is whole grain wheat. How many kids' cereals can you think of that are made predominantly of enriched or bleached flour? This cereal is also fortified with lots of vitamins and minerals, including several B vitamins like vitamin B12—which is naturally-occurring in meat and dairy products—and vitamin D3.

What made us award this cereal a B was the 9 grams of sugar that are in just 3/4 cup of the stuff. However, we still would consider this cereal a healthier option!

We love Honey Nut Cheerios because they are both gluten-free and vegan, which means it's more inclusive for kids with dietary restrictions. It's also notable that just one serving of this cereal lends 25 percent of your daily needs of iron, an important mineral you need to prevent fatigue. We awarded this cereal a B+ because it's low in fat, but it still contains 9 grams of sugar for under one cup of the stuff.

Cinnamon Life Cereal is a great cereal option for children and adults. One cup provides three grams of fiber, which is more than most kids' cereals provide. While it does have 10 grams of sugar, we ranked this one just slightly higher (awarding it an A-) than Cinnamon Toast Crunch and Honey Nut Cheerios because it accounts for a full cup of cereal rather than 3/4 cup. We also love that it contains a whopping 4 grams of protein! 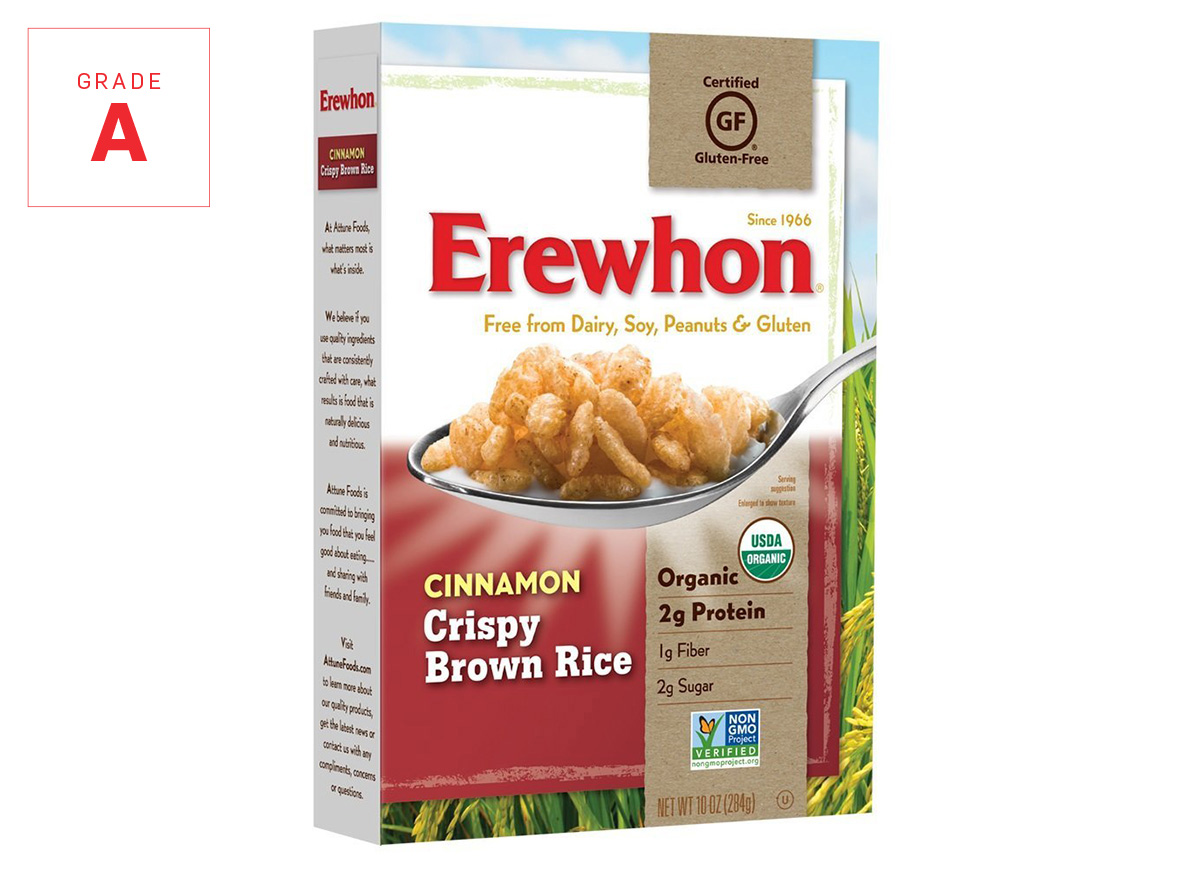 Erewhon Cinnamon Crispy Brown Rice Puffs receive a solid A from us. Why? One cup of this cereal has only 110 calories and 2 grams of sugar. Another big perk about this cereal is that it only contains six ingredients—all of which, with the exception of the salt, are organic.

The very best of the best is Barabara's Original Puffins, which contains five grams of fiber and three grams of protein per serving, both of which boost satiety. Sure, it has 3 grams more sugar than Erewhon Cinnamon Crispy Brown Rice Puffs, but we let it slide considering it has more fiber and protein per serving.

While we appreciate the fact that Golden Grahams uses whole grain wheat, we cannot get behind the fact that it packs 12 grams of added sugar per every one-cup serving. Children don't need to start their day off with this much sugar!

We have to admit, Reese's Puffs are one of our most cherished kids' cereals—how could we resist that peanut butter and chocolate combination? Unfortunately, we have some beef with this cereal, nutritionally-speaking. Why? Like Golden Grahams, Reese's Puffs contains 12 grams of sugar, and it also contains nearly 5 grams of total fat. We'd prefer you'd source your fat from a tablespoon or two of real peanut butter instead and get up to three times the protein.

This one may come as a shock for two reasons: it's not truly a kids' cereal and it's supposed to be a diet-forward brand. First, we identify that Special K isn't branded as a true kids' cereal. However, a few of us in the office admitted to noshing on it in childhood, especially when you consider this chocolate flavor. Second, while this cereal may look like a healthier option because it's got the Special K stamp, the truth is, it packs more than half of the sugar that's in a Hershey's chocolate bar.

We know Tony the Tiger boasts that Frosted Flakes are great and all, but truth be told, one cup packs a lot of sugar—nearly four teaspoons worth to be exact. Even worse, one cup of this sugary cereal doesn't even contain a full gram of fiber. Frosted Flakes are the perfect example of what's called empty calories, or calories that provide minimal to no nutrition.

The worst of the worst of all kids' cereals are, without a doubt, is Honey Smacks. Why? One cup contains just under 20 grams of added sugar. That is more sugar than what's in most flavored yogurts. If we were kids again, we'd pass on this cereal.