Got fall feels? Here's a fun fact: If you were one of many who predicted the arrival of Starbucks' pumpkin spice latte today, you were spot-on. In the 18 years since the PSL debuted, it's generated loyalty unlike any other seasonal drink. In fact, a representative for Starbucks cited an estimate to Eat This, Not That! of more than 500 million pumpkin spice lattes sold since 2003 in the U.S.

But if you've partaken in those half-billion bevs, were you aware of what you were actually drinking? A former Starbucks barista and a registered dietitian have given us insider info on what's in those beloved PSLs. Our RD also shared some nutrition know-how about the buzziest fall beverages just released by the big coffee chains, plus pro tips to help make your favorite fall order a little healthier.

Karen Graham, RD, CDE is a registered dietitian and certified diabetes educator, as well as the author of three books on diabetes. Regarding this roundup of new fall beverages, Graham delivers a thought-provoking perspective, starting with this: Of the ingredients that appear in these drinks, by far the most prominent is sugar. And she says that when you're craving that fall fix, it can be easy to forget just how dangerous sugar is.

"When you consume a ready-made drink with lots of added sugar, you stress all organs of your body, including your pancreas, heart, liver, and kidneys," Graham warns. "All these organs have to work hard to remove excess sugar from your body."

No, we're not taking the fun out of fall! But read on to find out more about the true effects of the new fall drinks—including which ones are best and worst for your health.

A note about nutrition 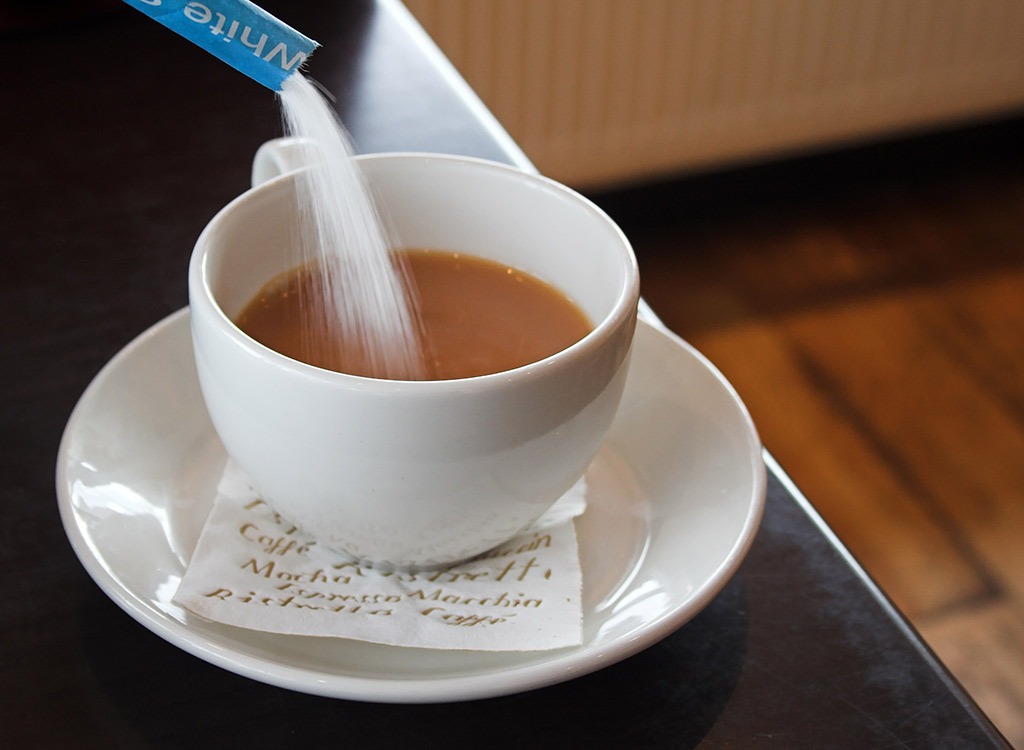 Graham explains that since all carbohydrates eventually convert to blood sugar, she analyzed these drinks based primarily on their carbohydrate content. However, she also warns that some of them are also high in saturated fat.

To help make sense of the sugar content's role, Graham converted the carbs for their equivalence to teaspoons of sugar. She also explains that the carbohydrate may come from any source, such as added sugar, honey, syrup, milk, fruit, vegetables, or grains. (However, she subtracted fiber, since it goes right through the digestive system "doing its job as roughage." This means it doesn't get converted to blood glucose.)

For the coffee icon of autumn, Graham calculated 12.5 teaspoons of sugar in a 16-ounce (grande) serving.

Since you probably haven't sipped on a PSL since last season, our former Starbucks barista reminds you that whipped cream is part of the standard order. To cut down slightly on fat, calories, and sugar, you can request customizing the drink by simply doing away with the whipped.

RELATED: What Happens To Your Body When You Eat Canned Pumpkin

If your cheeks are tingling just imagining that sweetness, your pucker is on point: Graham notes those 47 grams of carbohydrates are equivalent to 11 teaspoons of sugar.

As they bring their Pumpkin Cream Cold Brew back for the third year, a rep for Starbucks told Eat This, Not That! that the chain has sold a total of over 90 million in the U.S. since its 2019 premiere.

And while cold brew is classically lighter than the creamier lattes and macchiatos, a 16-ounce serving of this pumpkin pick-me-up contains 31 grams of carbohydrates, which Graham notes is equal to 7.5 teaspoons of sugar.

It's also worth mentioning that the pumpkin cream cold brew contains almost twice the fat as the apple crisp macchiato. Maybe that's not a deal-breaker, but a classic cold brew with a single pump of pumpkin (see what we did there?) might be a more fitting daily indulgence. As Graham suggests, "Have your sweetened drink for special occasions."

Peet's explains that they use an oat milk microfoam for this fall's centerpiece item. Peet's senior beverage innovator, Patrick Main, shared a bit about their development process, explaining that Peet's spiced pumpkin syrup is custom-designed by a flavored syrup maker in France. "Some pumpkin flavors are very gourdy and assertive or overly sweet," Main told us. "Those are not broadly appealing. We wanted to create a natural pumpkin taste that reminded us of the sensations, scents, and flavors of fall."

A relatively diet-approved pick, Peet's pumpkin oat foam cold brew weighs in with just under two teaspoons of sugar. Dietitian Graham also points out that selecting plant milks for this drink, such as oat milk, may add up to less fat than coffee drinks made with traditional dairy, such as whole-fat cow's milk. She adds: "A plant-based beverage . . . if unsweetened, usually has less sugar. However, sweetened varieties of these milk alternatives can have more sugar than regular milk."

A final note on Peet's pumpkin oat foam cold brew is that it's vegan. Our research tells us Starbucks' pumpkin syrup has traditionally counted milk among its ingredients, but Peet's reports that their pumpkin syrup contains no added dairy.

According to Graham's calculation method, Peet's "hand-pulled" pumpkin latte—made from espresso, steamed milk, and that proprietary pumpkin syrup—contains the equivalent of approximately eight teaspoons of sugar. As with any drink, one way to dial down this indulgence is to request a lower-fat milk as opposed to the standard 2% this drink comes with.

To top it off (and possibly boost your fall immunity), Peet's says they use real ground baking spices, like nutmeg, clove, ginger, and allspice.

This exclusive to Peetnik Rewards Members appears to be the biggest sweet treat at Peet's this fall. Blended with whole milk as the standard order, this frappe contains the equivalent of 13 teaspoons of sugar.

We suggest a lower-fat milk selection to make this frothy goodness lighter… or, satisfy your craving with the iced maple latte instead. The latte version cuts the frappe's calories and carbs in half and pours on just three grams of fat—a huge saving.

Coffee Bean & Tea Leaf's fall menu remains under wraps until later this week. However, a rep there shared with us that the brand is bringing back one fall flavor by popular demand.

What we do know is that CBTL is offering oat, almond, and soy milks available for any of their fall coffee drinks. This may be a nice complement to a plant-forward move that's reportedly about to occur on their breakfast menu.

Dunkin' was first to the party with its fall beverage announcement this year—we've got their list right here. But this large pumpkin cream cold brew? It's equal to consuming 13.5 teaspoons of sugar.

These dietitian's tips will make your essential autumn sip a little healthier:

Krissy Gasbarre
Krissy is a senior news editor at Eat This, Not That!, managing morning and weekend news related to nutrition, wellness, restaurants and groceries (with a focus on beverages), and more. Read more about Krissy
Filed Under
Body Health // Coffee // Fast Food // News // Restaurant Chains // Restaurants // Starbucks