"Who do I need to contact to make this happen?" one member asked. (Hey Costco, are you listening?!)

The Costco food court and bakery are two sections of the superstore that Costco members adore the most—so just imagine how sweet your Costco trip would be if these two sections capitalized on all that love! This weekend, a group of Costco members compiled a list of bakery goods they said they'd dream to see in the food court. Check out what happened when one Costco employee said they'd made this recommendation to upper management.

Read the Costco bakery wish-list that members want to see in the food court—and, do not miss The One Costco Bakery Hack Everyone Should Know About. (Editor's note: Some images may differ slightly from the actual products at Costco, though we aimed to meet the closest representation.) 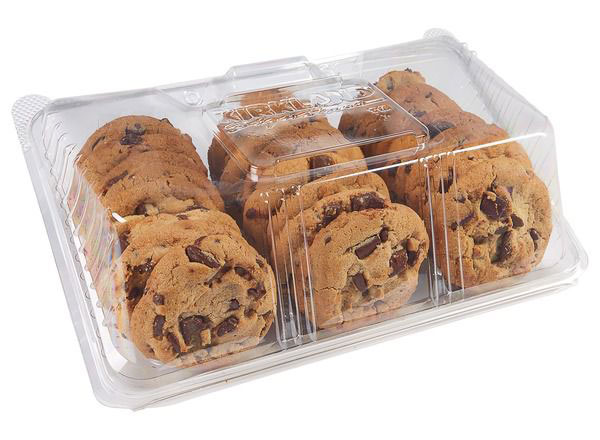 It all started Saturday, when u/Middle-Journalist762 posted a recommendation in the Costco community on Reddit:
They should sell their chocolate chip cookies in the food court. I'd buy one every time I shopped! Can't commit to a giant container of them from the bakery, but if they were available at the food court. Game changer. There is no prep, easy to dish out . . . Man! Who do I need to contact to make this happen!

We saw the post, and we got on it. Meantime, u/scooterj76 suggested an idea for how Costco could keep their food court chocolate chippers warm: "Options for lightly frozen or warmed in the churro case would be the bomb!" Touché.

Indeed, the Costco cinnamon rolls are so popular the company created a giant box of the miniature version at one point.

U/sauce07 saw the convo and offered this upgrade to the chocolate chip cookies: "Combine the cookie with the soft serve, charge me $3. Please and thank you."

That might seem a little over-the-top, but we'll give it to you, Sauce07. After all, it is National Ice Cream Day.

Redditor u/Evan_Evan_Evan was all about problem-solving and innovation: "I wish they would rotate bakery items in the food court so people would try them. Saves them on sampling them." We're fans.

Clearly aware of the passion many Costco members feel for the food court, u/cursesonyourmom appears to be a Costco employee who had the forethought for this awhile back—they'd thought of u/Evan_Evan_Evan's idea, too, and did something about it. "I actually suggested this to my warehouse manager during a one on one meeting a bit before covid hit the fan," they said. "No idea if it went anywhere with all the craziness." (Costco, we know you reward dedicated employees!)

One possible solution, for now…

Unless the decision-makers of Costco put members' input to use on this food court/bakery collab (as one popular steakhouse chain just did with their beloved bread), some Costco community members on Reddit offered what proved to be a common recommendation on the thread: Buy the cookies from the bakery, then freeze them until a craving strikes.

U/nycgirl2112 was one who said: "I buy the entire container and put them in the freezer. The chocolate chip cookies freeze beautifully. I take one out when I want one and set in on the counter for about 5 min. Freezing also helps so I don't sit and eat the entire container in a day!" [sic]

Whatever it takes to practice mindful eating—even from Costco's bakery!

Subscribe to the Eat This, Not That! newsletter, and keep reading:

Krissy Gasbarre
Krissy is a senior news editor at Eat This, Not That!, managing morning and weekend news related to nutrition, wellness, restaurants and groceries (with a focus on beverages), and more. Read more about Krissy
Filed Under
Costco // Groceries // Grocery Shopping // News