Golf balls, sheet cakes, jeans, and more. Here are the beloved products we said goodbye to in 2020.

When it comes to the convenience of a one-stop-shop, it's hard to beat Costco. The chain of wholesalers is beloved from coast to coast for making it easy to find everything from fresh produce to a pair of jeans—not to mention the customer favorite food court and the legions of fans devoted to the store's in-house brand, Kirkland. But every so often, items will disappear from the warehouse-style shelves never to return.

Whether it's a lack of popularity, a change in company policy, or just 2020 being 2020, there are some things that you'll never be able to pick up at your favorite wholesaler ever again. These are some of the items that Costco stopped selling recently.

And before your next shopping trip, read up on the 8 Grocery Items That May Soon Be in Short Supply.

Costco prides itself on providing high-quality products to its customers, but it also takes their health and safety very seriously. So when a California couple won a $2 billion lawsuit against Roundup parent company Monsanto after claiming the popular weed killer contained a cancer-causing ingredient called glyphosate, the company took notice. After receiving over 85,000 signatures on a Change.org position, Costco agreed to remove Roundup—as well as any other products containing glyphosate-based ingredients—permanently from its shelves.

To call 2020 a disappointing year would be an understatement of epic proportions, but one major Costco product change was what some would call the icing on the cake. In May, the wholesaler sneakily announced that it would be dropping its wildly popular half-sheet cakes from its offerings and replacing them with 10-inch round cakes.

"We are currently not selling our 1/2 sheet cakes at any US locations and as of right now, we have no immediate plans to bring them back. We are focusing on our smaller 10" White & 10" Chocolate Cakes that seem to be resonating with our members," a company spokesperson told the Today Show.

The 86-ing of the affordable dessert item caused nothing short of an uproar on social media, with devoted fans taking to message boards to make their grief known. But the realities of workplace safety in the pandemic seem to be at least partly to blame: the company replied in a social media post that the decision to drop the cake was made to "help limit personal contact and create more space for social distancing."

While this small, sweet treat isn't available anymore, here are 15 Desserts You Can Buy at Costco. 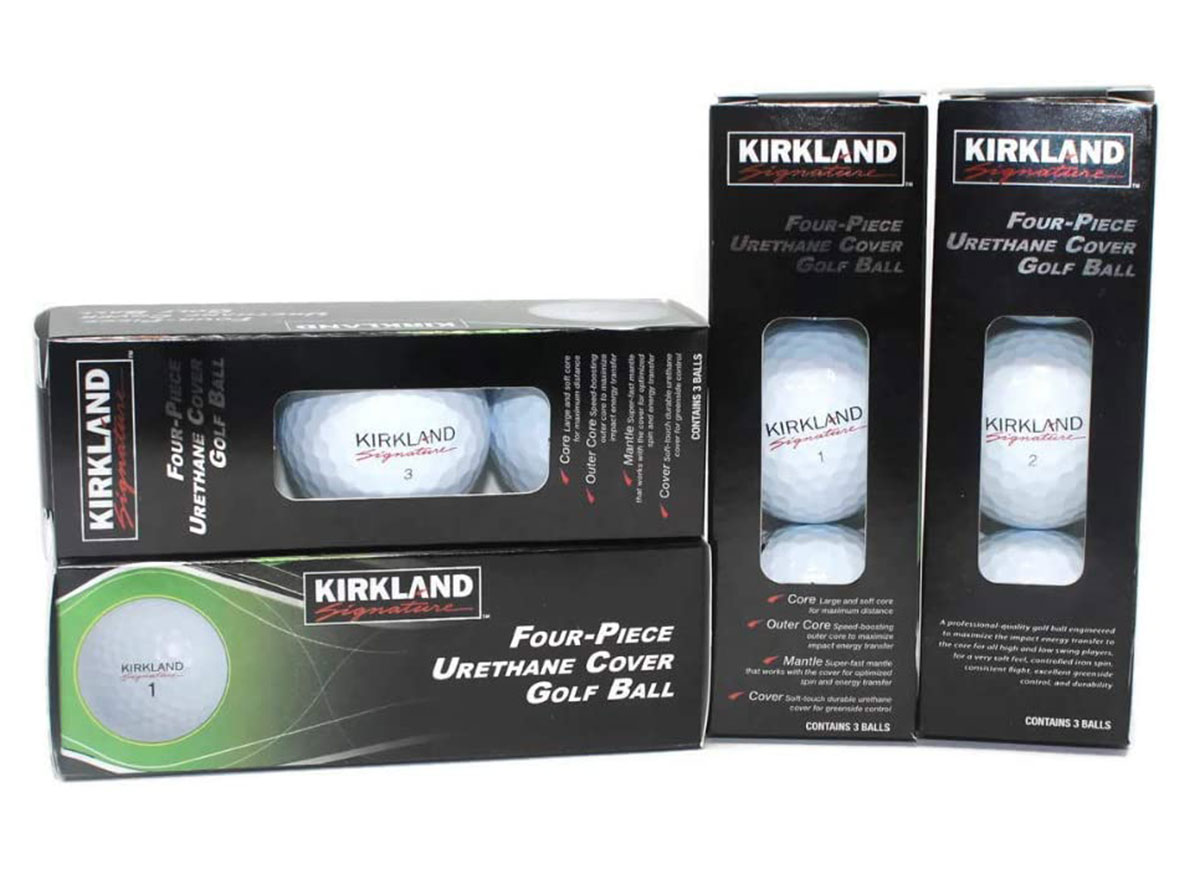 Finding an everyday staple you love at Costco can feel like hitting a hole in one. This is especially true for golfers, whose highly specific tastes made Kirkland Signature golf balls a hot ticket item for anyone hitting the links. But after a product update and a name change brought Kirkland Performance One golf balls to the shelves, customers quickly noticed there were some serious issues with diminished quality, according to Golf Digest.

When customer uproar ensued, the company reached out to anyone who had used a credit card to purchase the product and offered them a full refund, saying in a statement that the Performance One model did not "meet the high standards that are expected for the Kirkland Signature brand."

Related: The Worst Grocery Stores of 2020

The time-honored tradition of treating yourself to a pre- or post-shopping snack at the Costco food court is as popular as the items the store stocks itself. But in an effort to turn towards healthier offerings such as acai bowls and meatless salads, the retailer decided to phase out the wildly popular Polish hotdogs from menus nationwide—much to the disappointment of devoted dog enthusiasts.

But frank fans need not fret too much: locations still offer a combo meal of an all-beef dog with a soda for a bargain price of just $1.50. And that offering is likely never going anywhere since a co-founder once apparently threatened the company's CEO over changing the price of the food court staple.

While it may have become in vogue to make eco-friendly business decisions in the past few years, the wholesale chain has been using its influence to help protect the planet for decades. This includes its policy to start phasing out the sale of endangered or overfished seafood products from its offerings in 2011. Since Costco stopped selling endangered seafood, the list of banned species has expanded to include wild swordfish, bluefin tuna, sharks, Atlantic cod, Chilean sea bass, grouper, and most recently, Wild King Salmon. Instead, the company chooses to only source products from fisheries that are certified by the Marine Stewardship Council (MSC).

Related: It's Dangerous to Eat A Lot of This Type of Seafood, Study Says

Anyone looking for a sweet treat after perusing the aisles at Costco will be sorely disappointed to see one of the chain's standby's missing forevermore from its food courts' menus. The wildly popular—and at $1.50, affordably priced—chocolate-dipped ice cream bar was axed from the warehouse retailer's offerings, spurring a stream of online petitions to save the item. Unfortunately, none have so far seemed to be successful in reviving the dessert.

For more on this, here are 5 Beloved Costco Food Court Items We Miss the Most.

The major rollback in the number of retailers who offer tobacco products has ramped up in the past decade, and Costco can be counted as one member of the list. In 2016, the company began removing cigarettes from its shelves, completing the rollout nationwide within a few years.

But it doesn't appear to be a decision based solely on the health concerns of its customers. In an interview with Money, a company spokesperson said: "Tobacco is a very low margin business, tends to have higher theft and is labor-intensive in some cases (due to local municipality regulations)—further, we felt we could better use the space to merchandise other items."

Certain Kirkland products fill an important void for customers that many don't realize until they're gone. That appears to be the case with its American cheese slices, which were sold unwrapped unlike Kraft Singles until they were pulled from shelves. Customers argue that not only does the extra plastic used in packaging each slice in the name-brand version make it off-putting, but the in-house brand simply tasted better to boot.

This isn't the only cheese product Costco stopped selling this year. In September, Costco Abruptly Removed This Popular Cheese Brand From Its Stores.

Menu changes can be difficult for large chains to roll out—even for operations with concise offerings like Costco's food courts. But a decision to remove chocolate frozen yogurt from machines to make room for acai was first felt in Southern California locations in 2018 before rippling throughout locations nationwide. This relegates chocolate and vanilla swirl cones only to memories.

Taking a stand against animal cruelty is hardly a new concept in better business practices. But when PETA revealed in 2020 that popular coconut milk brand Chaokoh was using forced monkey labor to produce the product, companies like Costco began to take note. "When not being forced to pick coconuts or perform in circus-style shows for tourists, the animals were kept tethered, chained to old tires, or confined to cages barely larger than their bodies," PETA said in a statement. "One coconut farmer confirmed that when monkeys are terrified and try to defend themselves, handlers may have their teeth pulled out."

While Costco never officially commented on the issue, a letter from the Vice President of Corporate Food and Sundries Ken Kimble to PETA President Ingrid Newkirk made it clear a decision had been made, CNN reports. "We have ceased purchasing from our supplier/owner of the brand Chaokoh," the Sept. 29 letter stated. "We have made it clear to the supplier we do not support the use of monkeys for harvesting and that all harvesting must be done by human labor."

If you're looking for an alternative brand to buy, here are The Best Coconut Milks, According to Nutritionists.

A commitment to providing healthier options doesn't always dictate what ends up on Costco's shelves. In late 2018, the company began removing the popular Kirkland Signature Turkey Burgers from its freezer sections, with customers soon bemoaning their loss as a leaner 200 calorie alternative to beef patties.

Related: The Unhealthiest Burgers in America—Ranked!

It's not just sheet-cakes that didn't make it through 2020: customers also noticed that Costco's popular four-layer chocolate cake was no longer being stocked. Apparently, absence has made hearts grow fonder for the decadent dessert, prompting a Change.org petition that has so far received upwards of 5,000 signatures.

There's currently no word on why Costco stopped selling this huge dessert delight. But how about making your own? Here's our recipe for a Healthy, Low-Carb Flourless Chocolate Cake.

Most savvy shoppers know that Kirkland Signature wine and spirit products can be among some of the best value buys on the market. Unfortunately, those quality standards appear to have stopped short of the brewery doors. After a wave of horrific reviews surfaced online railing against Kirkland Signature Light Beer, the company decided to discontinue the line and pulled it from shelves nationwide.

Despite being only 105 calories per can and only costing 50 cents apiece, it appears no bargain is worth experiencing a product described vividly as a "urine-soaked diaper," according to Business Insider.

Even with fewer calories, there are Dangerous Side Effects of Drinking Alcohol Every Day, According to Science.

While it was never available at all locations, Costco's food court appeared to have spawned another fan favorite with its beef brisket sandwich. But as healthier options were ushered in to menus nationwide, the $4.99 sandwich was another one of the offerings that were given the boot.

BBQ die-hards can rest somewhat easy: Kitchn reports that the sandwich has popped back up as a limited seasonal item in some stores as recently as this year.

It may not have landed in the pages of Vogue, but Costco managed to create a slight sartorial uproar in 2016 when they pulled the wildly popular Kirkland Signature 5-Pocket Jeans for men from the racks. After reintroducing the design, customers complained that the quality of the cut and fabric had been significantly reduced, Costco stopped selling the style outright months ago, according to Yahoo!.

Like any responsible company, it's clear that Costco takes animal welfare seriously. This includes the sourcing of its poultry products, which the company has committed to revamping to only include eggs produced from cage-free hens. To date, the company has come close to fully turning over its supplies, with 94% of eggs in inventory currently meeting the requirement, but the company has announced that it will reach its goal to go fully cage-free by the end of 2020.

Related: Eating This Many Eggs Could Be Terrible for Your Body, New Study Shows

Whether it comes from Julia Child or the back of a box, any decent home chef knows that a good recipe is worth its weight in ingredients. Unfortunately, after 2020, you won't be able to rely on an annual Costco tradition to help you whip up new dishes: the company announced it was discontinuing its "Cooking the Costco Way" lineup of branded cookbooks that were traditionally sent to members around Thanksgiving.

Fortunately, the previous editions still live online, and they've decided to relaunch the recipe source as a section called "Farm to Table" in the company's digital magazine, Costco Connection, so even though Costco stopped selling the hard copies, you can still get inspiration before you go shop for ingredients.

To get the latest Costco news delivered right to your email inbox every day, sign up for our newsletter!

Zachary Mack
Zach is a freelance writer specializing in beer, wine, food, spirits, and travel. He is based in Manhattan. Read more about Zachary
Filed Under
Costco // Grocery Shopping // News