Stews and soups were made for the slow cooker, but so were these easy favorites.

The slow cooker is the workhorse of the kitchen. Set it, forget it, and 8-12 hours later, you'll have a meal that will feed the whole family.

But, if you're only using your slow cooker to make soups and stews, you're missing out on a whole world of easy cooking. This simple gadget keeps heat even for low and slow cooking, perfect for those less expensive meats that need time to soften up, but it also works magic on breakfast foods and desserts that you don't want to scorch in the oven or stove if you forget about them. Read: No more burned oatmeal and pots and pans you need to soak and scrape!

Plus, the slow cooker keeps things from sticking naturally without added fat, making it the ultimate diet device (outside of a complicated sous vide machine). To get your creative kitchen juices flowing, here are some of the most unexpected recipes you never knew you could make in a slow cooker. (Plus, don't miss 15 Cozy Old-Fashioned Casserole Recipes Perfect for Fall.)

Oven taking up space this Easter? Don't fret, while it's true you need a large slow cooker for a whole ham–or a smaller ham—the slow cooker is the perfect place to heat an already cooked ham to temperature while potatoes and dessert bubbly happily in the oven.

Get the recipe to Dinner At the Zoo.

With St. Patrick's Day right around the corner, cooks everywhere are thinking about making this yearly nod to the Emerald Isle. Good news! You can make the whole dish in your slow cooker.

Get our recipe for Corned Beef and Cabbage. 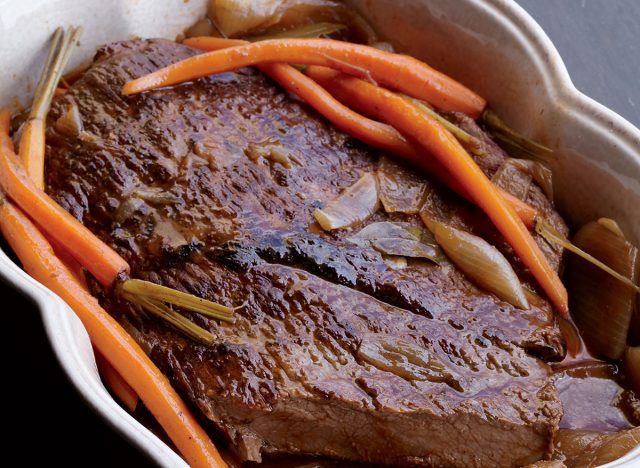 A lean cut like a brisket does very well in the low heat environment of the slow cooker. After a quick sear, the meat is transferred to the slow cooker with veggies to finish melting into deliciousness over several hours.

Get our recipe for Braised Brisket With Horseradish Cream.

Steel-cut oats are known for their health benefits, and unfortunately, their long cooking time. Enter the slow cooker. Dump all of your ingredients in the slow cooker and let everything soften for 5-8 hours, depending on the consistency that you like. Viola! Breakfast is served for the week.

If you don't need your lasagna to be pretty, this is a great way to make the dish. You will not need to boil the noodles first.

Get the recipe from Pinch of Yum.

Dry meatloaf will be a thing of the past when you enlist the help of your slow cooker.

The problem with French onion soup is waiting around and babysitting onions until they turn into caramelized deliciousness. The slow cooker lets you skip the constant stirring.

Try this recipe from Eating Well.

Pork chops may not be the first thing you think about tossing in the slow cooker, but if you want super-tender chops without a hint of toughness it's the perfect vessel. These sweet and tangy Slow Cooker Hawaiian Pork Chops from Creme de la Crumb will make you a believer.

The slow cooker lets you make the healthiest mac and cheese by letting lighter ingredients meld together slowly without drying out. SkinnyMs' version has just 244 calories a serving compared with 500 and up in traditional baked mac and cheese.6254a4d1642c605c54bf1cab17d50f1e

Get Skinny Ms' recipe for Slow Cooker Mac and Cheese.

The trick to perfect slow-cooker pot roast is to brown the meat first. Yes, you'll dirty another pan, but this step really is worth it for the best results, says Cooking Classy. To make it every better use fresh herbs and waxy potatoes–like Yukon Golds.

Get this recipe from Cooking Classy.

If you have not made ribs in a slow cooker, you are missing out. The meat will fall right off the bone and will never dry out. After a quick broil or sear on the grill, slather the ribs with sauce and enjoy.

You don't need a breadmaker to make healthy, fresh bread. You will, however, need to pop the bread into the oven to brown after it is done, but the soft, chewy interior will be so worth it.

Try this recipe from Baked By An Introvert.

Getting French toast right takes time—time spent soaking the bread and then time spent cooking each individual slice. The slow-cooker soaks and cooks all in one pot. Once you wake up a Sunday to Diethood's ​​Creamy Crock Pot Banana French Toast, you'll never go back to the traditional way.

Kiss dry banana bread goodbye by cooking it in the slow cooker. This recipe is also a healthier version of the traditional since it doesn't need a lot of oil to stay moist. Pro tip: This recipe works best with super ripe bananas—think blackened—if yours aren't at that stage, pop them in the oven to roast until dark.

Get the recipe from The Nut Butter Hub.

Yup, cinnamon rolls can be made in a slow cooker too. Using the slow cooker allows the rolls to rise and bake in one environment, resulting in "a cinnamon roll miracle," according to Sally's Baking Addiction.

Get the recipe from Sally's Baking Addiction.

Yes, soft, creamy fudge can be made in your slow cooker. Okay, this isn't a healthy dish but if you cut small pieces and enjoy from time to time, it's a wonderful dessert. Plus, you can play around with the ingredients to make your favorite blend.

The worst thing about any cake is when it gets too dry. This pudding-spiked carrot cake recipe cooks in the slow cooker so that doesn't happen. Try this recipe for Easy Slow Cooker Carrot Cake from Show Me the Yummy. If chocolate cake is more your thing, try this Hot Fudge Cake with Peanut Butter Sauce from Pinch of Yum.

You can cook a crisp or cobbler in a slow cooker too, keeping the kitchen much cooler in the summer when fresh fruit is everywhere. Gimme Some Oven's trick to getting the crisp actually crisp is to use a kitchen towel or a few paper towels on top of the slow cooker below the lid. (The blog does caution that different slow cookers heat up differently so use the method with caution.) Try Diethood's Crock Pot Blueberry Crisp or this Slow Cooker Apple Crisp from Gimme Some Oven.

A previous version of this article was originally published on Mar 7, 2022.