The Worst Fast-Food Desserts on the Planet

After a salty meal, you might in the mood for something sweet. But these treats are downright scary.

When you're craving a burger, chicken nuggets, and some fries, a trip to your favorite fast-food restaurant is in order. And if you happen to want a sweet treat to cap off the meal after indulging in all that salt that comes from your main course, it's understandable. But there are some truly unhealthy, worst fast-food desserts that just shouldn't be eaten after a big meal, and frankly, you should just avoid them entirely.

Here, we break down the worst fast-food desserts, ranked from the bad to the absolute worst, so you know exactly which sweet treats you're much better off without. And while you're making better choices, be sure to stock up on The 7 Healthiest Foods to Eat Right Now.

Although this White Castle brownie that, yes, is actually served on a stick is the least offensive of all the culprits, that doesn't mean you should be eating it regularly. Especially if you consume a full meal from White Castle right before!

Milkshakes are always a dangerous option, and when you add Oreo cookies to the mix, that means more demerits for this dessert choice from Carl's Jr. (And for more help figuring out foods are the best and worst options out there, here is your ultimate restaurant and supermarket survival guide!)

Think going with a fruit-based option is better? While Checkers' banana milkshake is lower in calories than other desserts on this list, it packs 63 grams of sugar. That's more sugar than you'll get in six Original Glazed Krispy Kreme donuts. Yikes!

Oftentimes, you associate dessert with something sweet. So imagine your surprise when you uncover just how much sodium is in one of Whataburger's cinnamon rolls. More than 1,200 milligrams is just outrageous!

This cinnamon roll is a no-go, just like any of these worst desserts on store shelves.

This Chick-fil-A milkshake has just about the same amount of calories as two Grilled Chicken Sandwiches. Let that sink in. And along with this shake being high in calories, it's sky-high in sugar, packing in more than eight Krispy Kreme Original Glazed Donuts' worth of sugar. 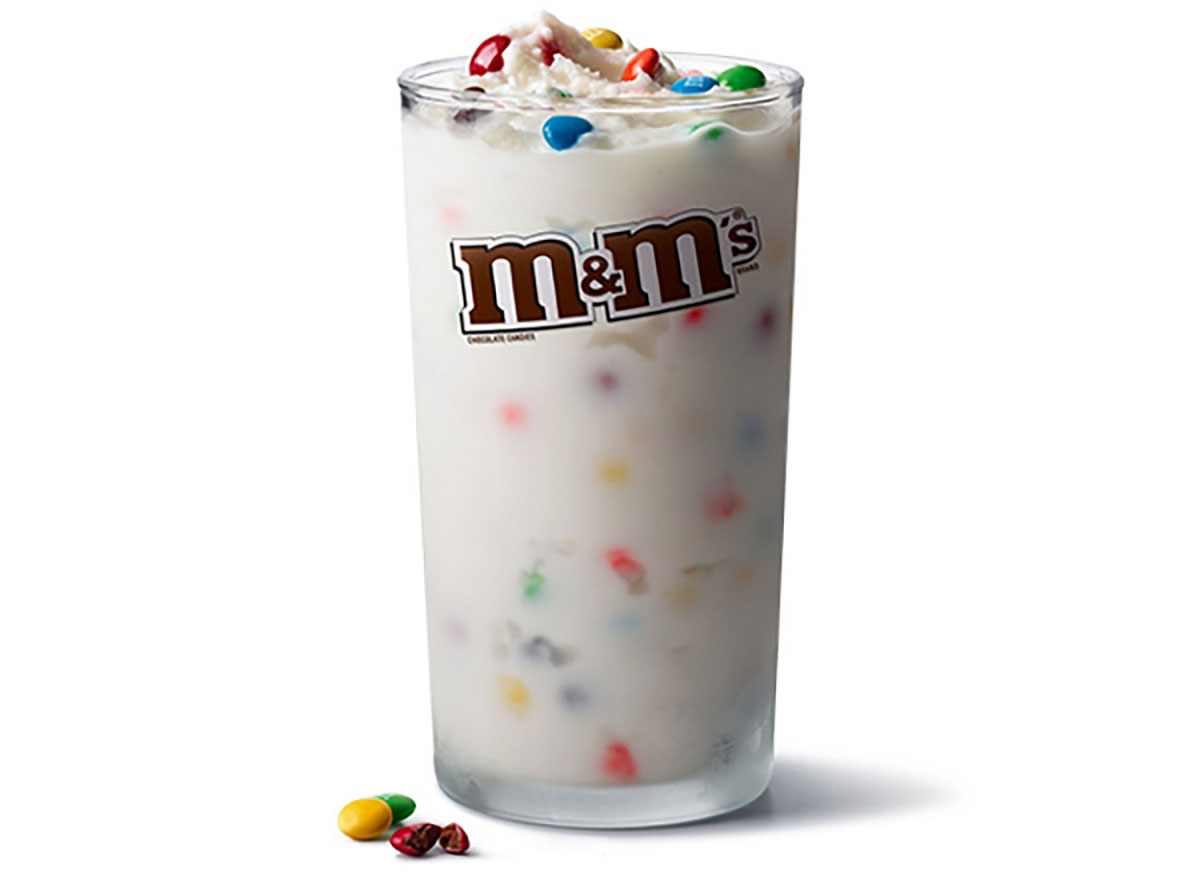 Just about everyone who pays a visit to McDonald's knows how legendary the McFlurry ice cream treat is, but the regular-size has 83 grams of sugar. Oh yeah, and it has more calories than a Big Mac. No thanks!

Adding bacon to anything is going to tack on more calories, fat, and sodium, but at Five Guys, the bacon milkshake is also high in sugar, too. All around, there is just nothing redeeming about this dessert.

At Burger King, the chocolate Oreo shake is the one to stay far away from, as it has more calories than BK's Original Chicken Sandwich and serves up more than 100 grams of sugar. That is just scary!

Sonic is known for its beloved frozen desserts, but this Oreo Peanut Butter Shake milkshake is one you don't want to look twice at. The fact that it will cost you more than 1,700 calories and 1,000 milligrams of sodium and has 107 grams of sugar, there is just nothing to brag about here.

A banana split might seem like a healthier dessert option since it contains fruit. But don't fall for that! At Culver's, this ice cream sundae has more than 1,300 calories, 74 grams of fat, and 124 grams of sugar. It's excessive in every way! If you happen to order this, be sure you're sharing it with quite a few friends.6254a4d1642c605c54bf1cab17d50f1e

At Arby's, the flavors of chocolate and coffee come together for the famous Jamocha Shake. Sure, it's a delicious combination, but take a few sips and leave it alone. Why you ask, as it's easy to drink it all? Well, coming in at nearly 1,000 calories and 141 grams of sugar, you'll want to keep away from this guy.

At A&W, the Polar Swirl is a staple, but the M&M flavor that comes in a ridiculously large 2o ounce size is the one to avoid. Sorry, but 162 grams of sugar is just not OK! Again, if you happen to order this, it better be to share this treat with a lot of loved ones.

We've met the worst of the worst. If there's one fast-food dessert to forever steer clear of, it's Dairy Queen's Brownie Dough Blizzard. The large size of this frozen treat has more calories than the six-piece chicken strip basket, which consists of chicken strips, fries, and Texas toast clocks in at 1,300 calories. Imagine eating that entrée and then this Blizzard right after for dessert. You now know better, that's for sure!