The Best Drinks for a Better Night's Sleep, Say Experts

Good night and sleep tight thanks to these drinks

According to the Mayo Clinic, adults require 7 hours or more a night of sleep. Getting less than seven hours of sleep a night on a regular basis has been linked with problems such as weight gain, having a body mass index of 30 or higher, diabetes, high blood pressure, heart disease, stroke, depression, and more. Focusing on what you eat before bed as well as getting into a routine are major factors. What you drink can also give you a better night's sleep.

We gathered information from some of the dietitians on our medical expert board so we can see what the best drinks are for a better night's sleep. Here's what to sip on, and for more information about sleep, check out our 3 Best Tips for A Better Night's Rest.

For some people, drinking milk at night can help them unwind before bed, and there are several ways to drink it. This can be in the form of warm milk, warm hot cocoa, or even golden milk (turmeric milk).

"Many folks say it helps them unwind and destress," says Toby Amidor, MS, RD, CDN. "There is no scientific evidence, however, if you feel that having a nutrient-filled beverage before bed helps you sleep better and relax then go for it!"6254a4d1642c605c54bf1cab17d50f1e

"Milk is a high-quality protein, meaning it is an excellent source of essential amino acids," says Amy Goodson, MS, RD, CSSD, LD. "Casein, which is the primary protein constituent found in milk (about 80% of milk protein), is a slower digesting protein that has been shown to promote satiety leaving you more satiated as you fall asleep."

Drinking milk may even help to alleviate sleep disturbances. The beverage also contains tryptophan, which is a precursor to the sleep-regulating hormone melatonin. Therefore, not only is a glass of milk before bed a satiating snack that provides you with 13 essential nutrients, but it may also help to improve your sleep quality.

Chamomile is an herb that comes from the daisy-like flowers of the Asteraceae plant family and has been consumed for centuries as a natural remedy for many conditions such as lowering blood sugar, reducing inflammation, treating cold symptoms, and helping sleep deprivation.

"Chamomile extract has been promoted for its sedative effects for ages," says Goodson. "There is some research to suggest that chamomile tea may be beneficial at improving sleep quality and reducing physical symptoms of sleep insufficiency. There is also some promise that chamomile extract may have anti-insomnia effects as well, however more research is needed to fully support this claim."

Not the most common beverage, but cherry juice boasts a lot of health benefits, such as boosting immunity, reducing inflammation,  and improving sports performance. Cherry juice is similar to milk in that it contains high amounts of the melatonin called precursor tryptophan, which helps to aid better sleep. 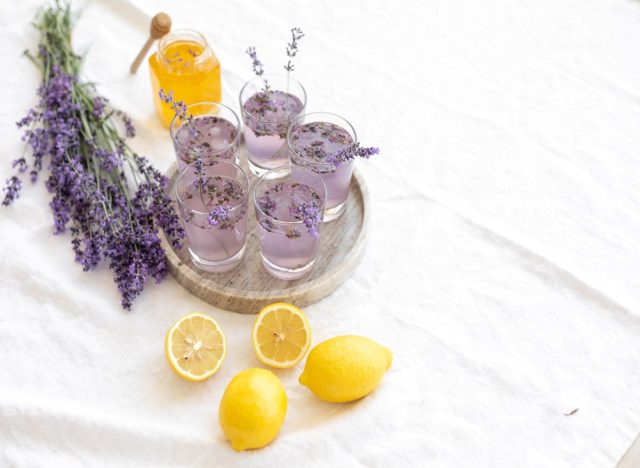 Originally, lavender was used as a form of aromatherapy, widely believed to create hypnotic effects, act as a mood stabilizer, and enhance the positive feelings of mothers toward their infants. Now, it also acts as a tea that can potentially calm whoever drinks it and is made by brewing the purple buds of the Lavandula angustifolia plant with hot water.

A study published in the journal Worldviews on Evidence-Based Nursing found that lavender tea helped with depression and fatigue, especially in postnatal women.

This study was conducted in Taiwan to evaluate the effectiveness of lavender tea in relieving sleep quality, fatigue, and depression; and in improving maternal-infant attachment during the early postpartum period. The research found that the women in the experiment seemed to have less fatigue and depression, as well as showed greater bonding with their infant compared with the control group.