These Are the Best Low-Carb Spaghetti Sauces, Approved by Nutritionists

Whether you're following a keto, Whole30, low-sugar, or low-carb diet, you can still indulge in your favorite marinara sauce — with a few adjustments.

By Sarah Bradley
This post contains affiliate links. If you use these links to buy something, we may earn a commission.

If you're cutting back on added sugar or carbs in your diet, you probably already know to say goodbye to soda, white bread, fruit juices, and breakfast cereals. You may not know that you need to be careful about which brands of jarred marinara sauce you buy, too. To balance the acidity of tomatoes, many brands add sugar to their sauces. unfortunately, that won't do if you're sticking to a Whole30, keto, or low-carb diet. That's why we asked nutritionists for their advice to find the best low-carb spaghetti sauce brands you can buy.

Why is there sugar in spaghetti sauce (and how much)?

Ummm… there's sugar in marinara sauce? Yup. Tomatoes naturally have about four or five grams of sugar per serving; however, brands will also add even more sugar to offset the acidic flavor of the sauce.

Just because you need a little sweetness to balance out the flavor, though, doesn't mean the amount of sugar found in some popular store-bought pasta sauce brands is necessary.

How much sugar are we talking? Here's a comparison of three popular sauces and the sugar content in each, alongside foods that contain the same amount of sugar.

Yeesh. If you wouldn't top your spaghetti with three fun-size Butterfinger candy bars, you won't want to pour a serving of Ragu's Chunky Sauce on there, either. Thankfully, these brands are some of the worst offenders—not all marinara sauces are this high in sugar. You can make healthier choices by picking the best low-carb spaghetti sauce brands.

How to shop for low-carb spaghetti sauce.

If pasta is in your dinner rotation every week, you're probably buying jarred marinara sauce pretty regularly (unless you're one of those fancy home chefs who makes their own…jealous!). And marinara sauce can be a healthy addition to your weeknight meals: it's often loaded with veggies but lacking in the fat and calories that come with cream-based sauces like alfredo.

The problem is that if you don't check out the label on the back of your jar, you could be inadvertently wiping out all the health benefits of marinara with sky-high amounts of sugar.

"A serving size of marinara is usually ½ cup," says Amy Shapiro, RD, CDN, and founder of Real Nutrition. "Aim for a sauce with about 35 to 50 calories, with sugar only coming from the tomatoes."

According to Shapiro, here's what to look for when you're shopping for healthy marinara sauces:

Prepping a low-sugar, low-carb pasta dinner? First off, grab a box of high protein pasta to cut back on carbs on that front. Then, stock up on any one of these 9 low-carb spaghetti sauce brands at your local supermarket. Every option has less than seven grams of sugar and 11 grams of carbs per ½ cup serving. 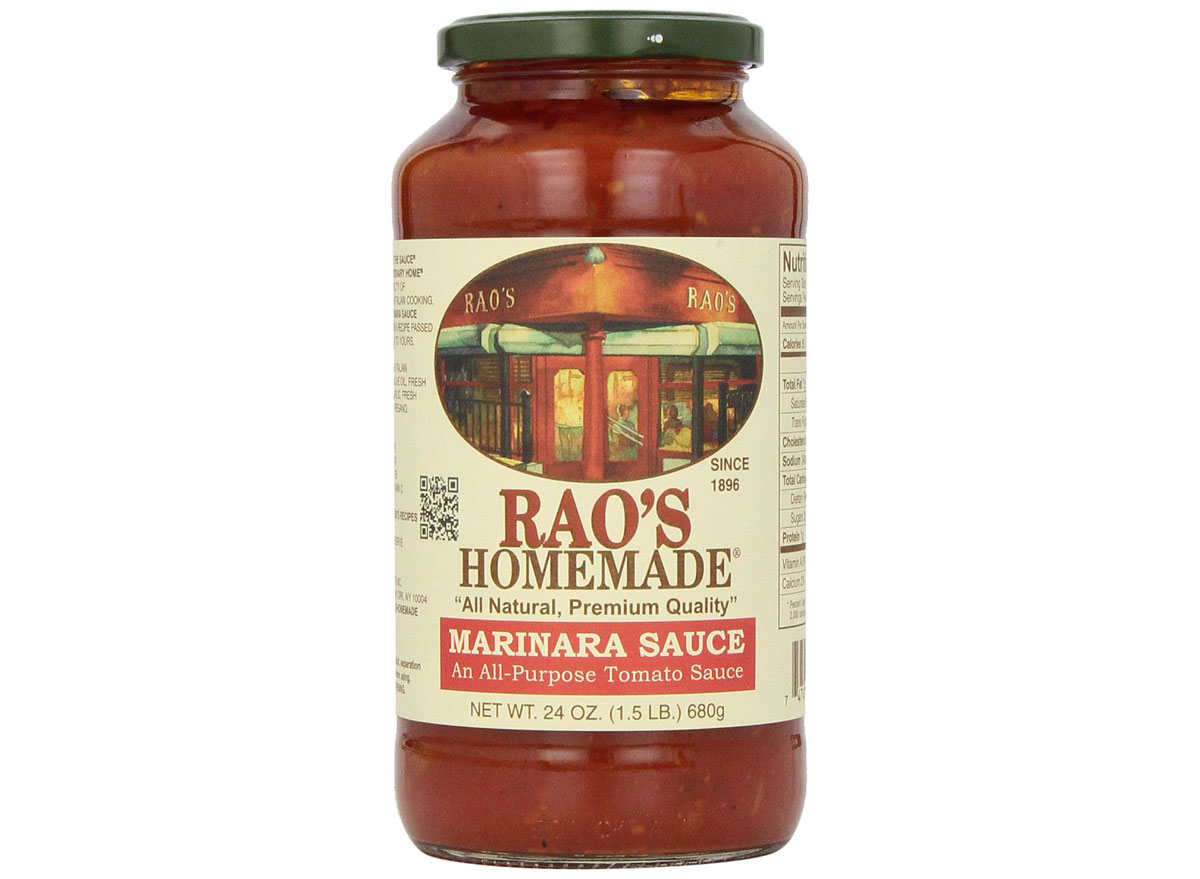 There are no unexpected ingredients in this marinara sauce, only whole peeled tomatoes, onions, olive oil, and herbs and spices. That means it tastes an awful lot like homemade sauce…maybe even enough to fool your family when you serve it over penne. 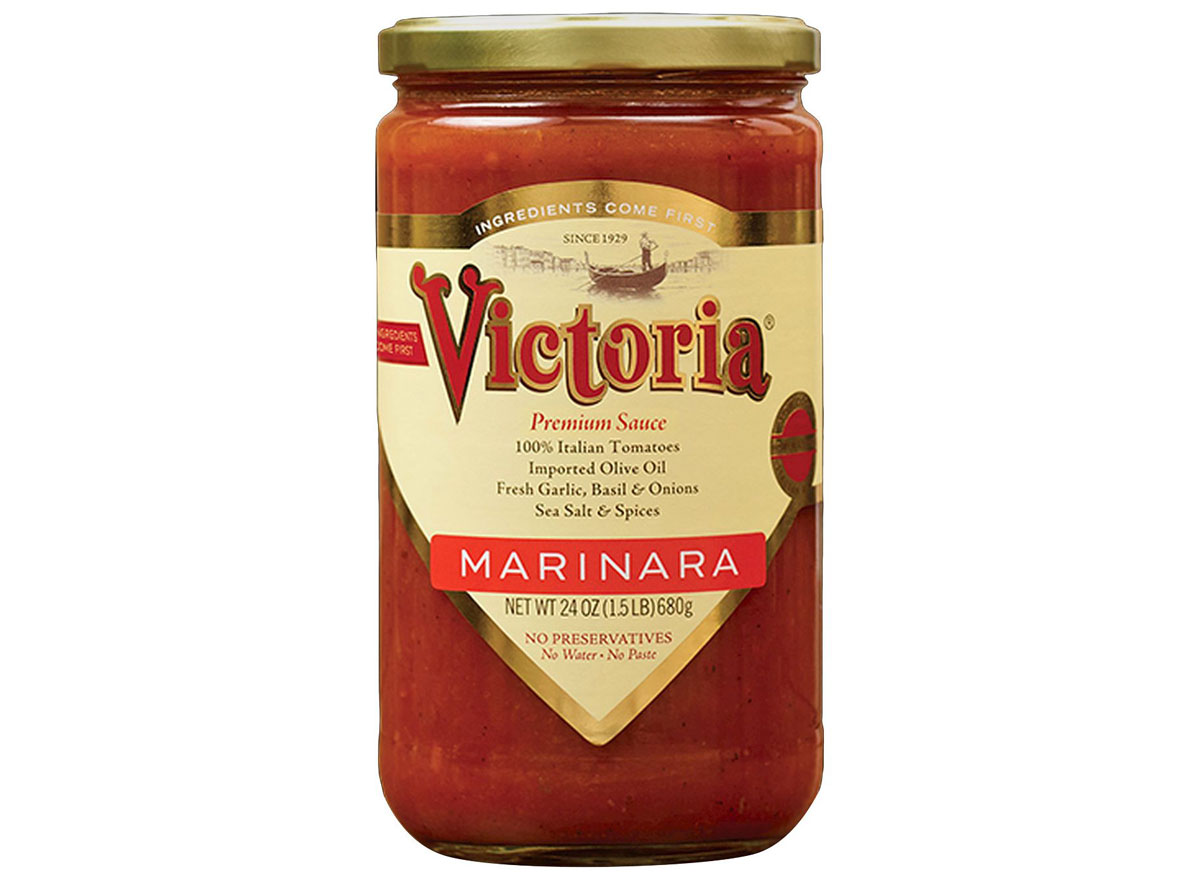 Clean, whole ingredients and a low sugar content (plus availability at your local Target!) make this brand a great foundation for many Italian dishes. Some reviewers note that it can be more watery than other sauces, so it might be best used as base for soups, meat sauces, and casseroles rather than on its own. 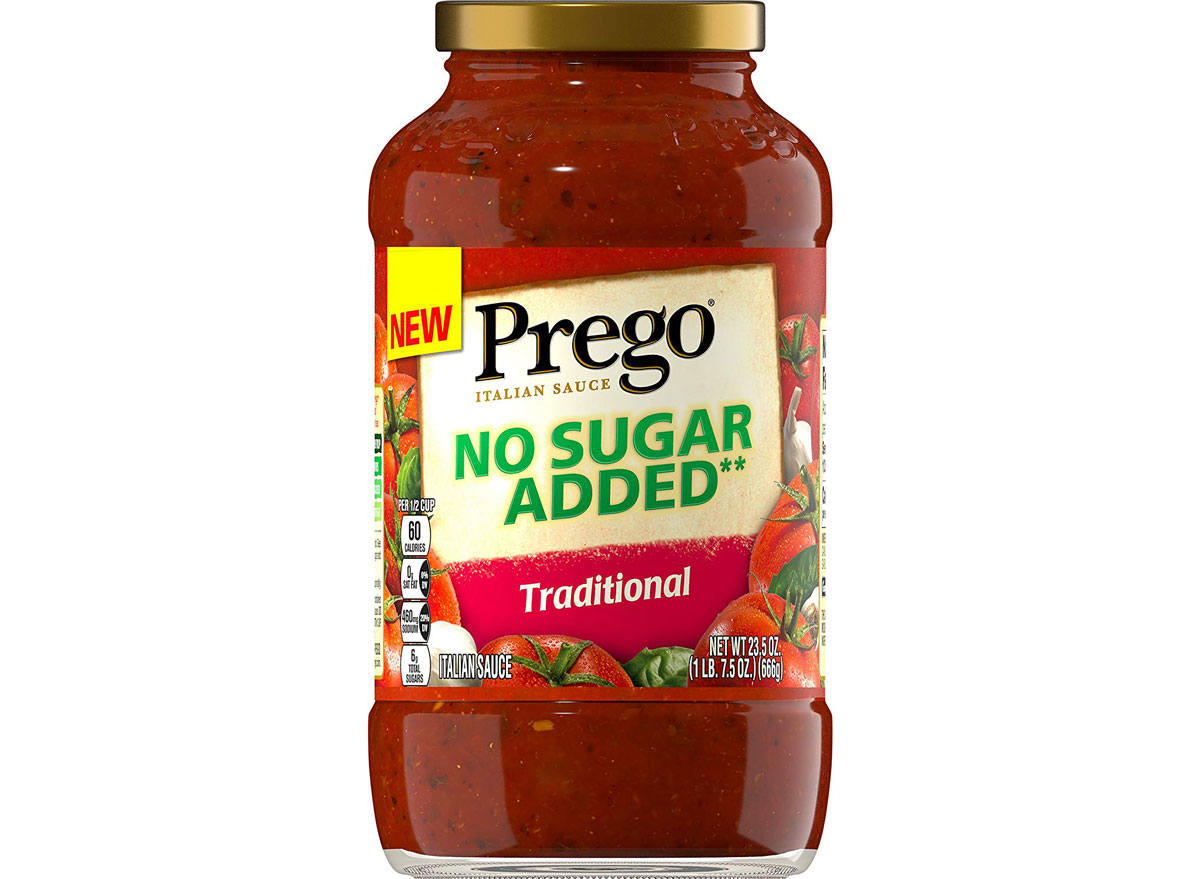 There aren't a lot of popular name brands here because they tend to skew high in sugar, but since Prego cracked down on the sweet stuff for this variety, leaving out added sweeteners entirely, this could be a great choice for people who don't have the access to or budget for gourmet brands but still don't want to max out their sugar intake. 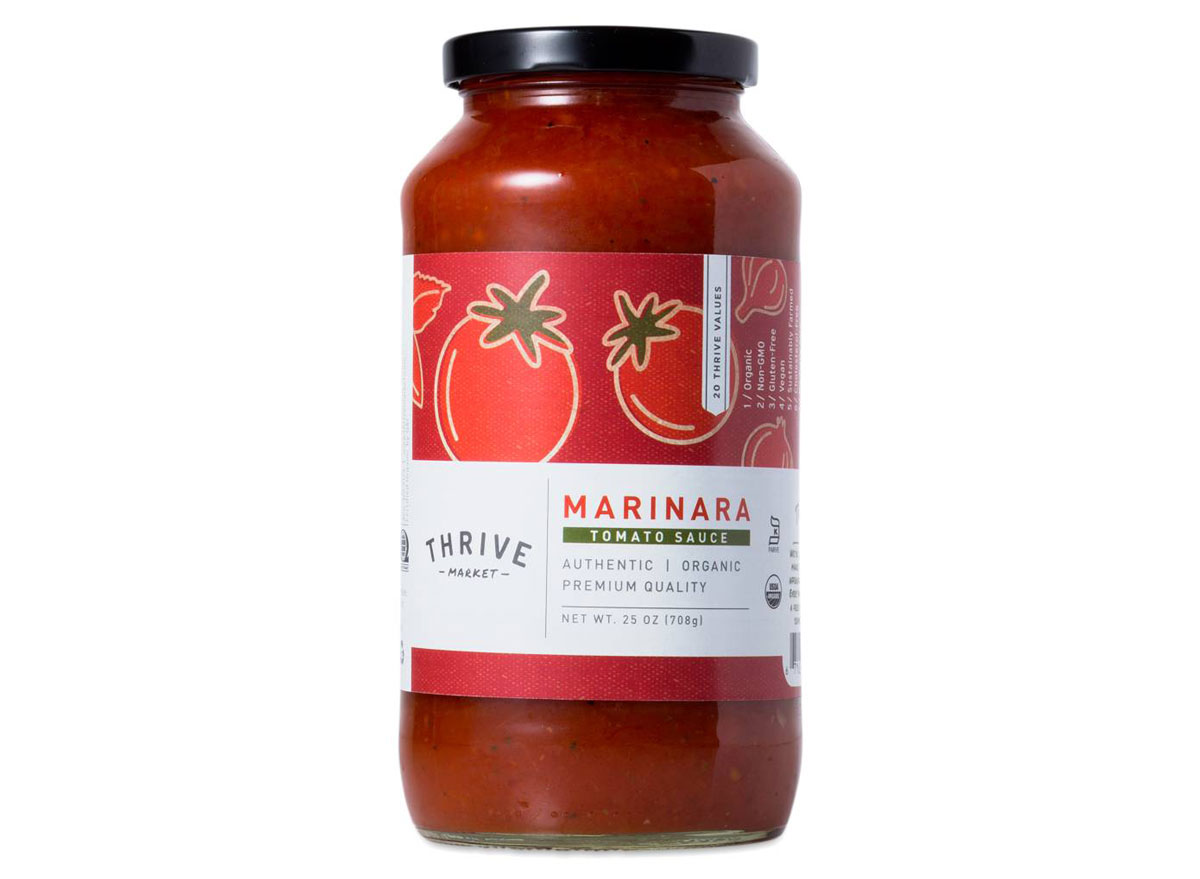 As an organic marinara, this sauce promises sustainably-grown tomatoes and clean, non-GMO ingredients. Reviewers seem to give both the taste and consistency two-thumbs up, so if you're a regular Thrive Market shopper, you can feel good about adding this sauce to your cart. 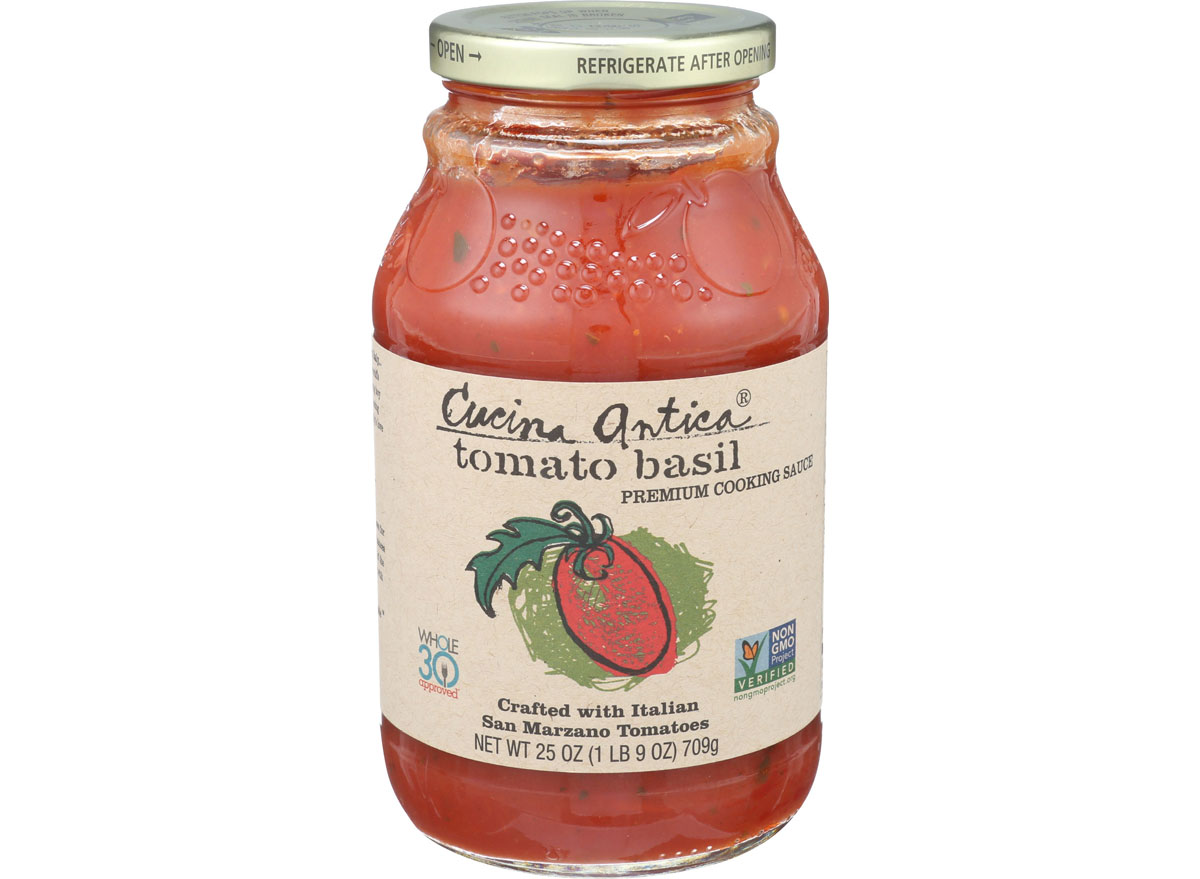 Cucina Antica's sauce can't win in the sodium category, but it does have the lowest amount of calories and sugar out of all the sauces on this list. This Whole30-approved low-carb spaghetti sauce is not the cheapest, but for true healthy marinara aficionados, it might be worth the price tag. 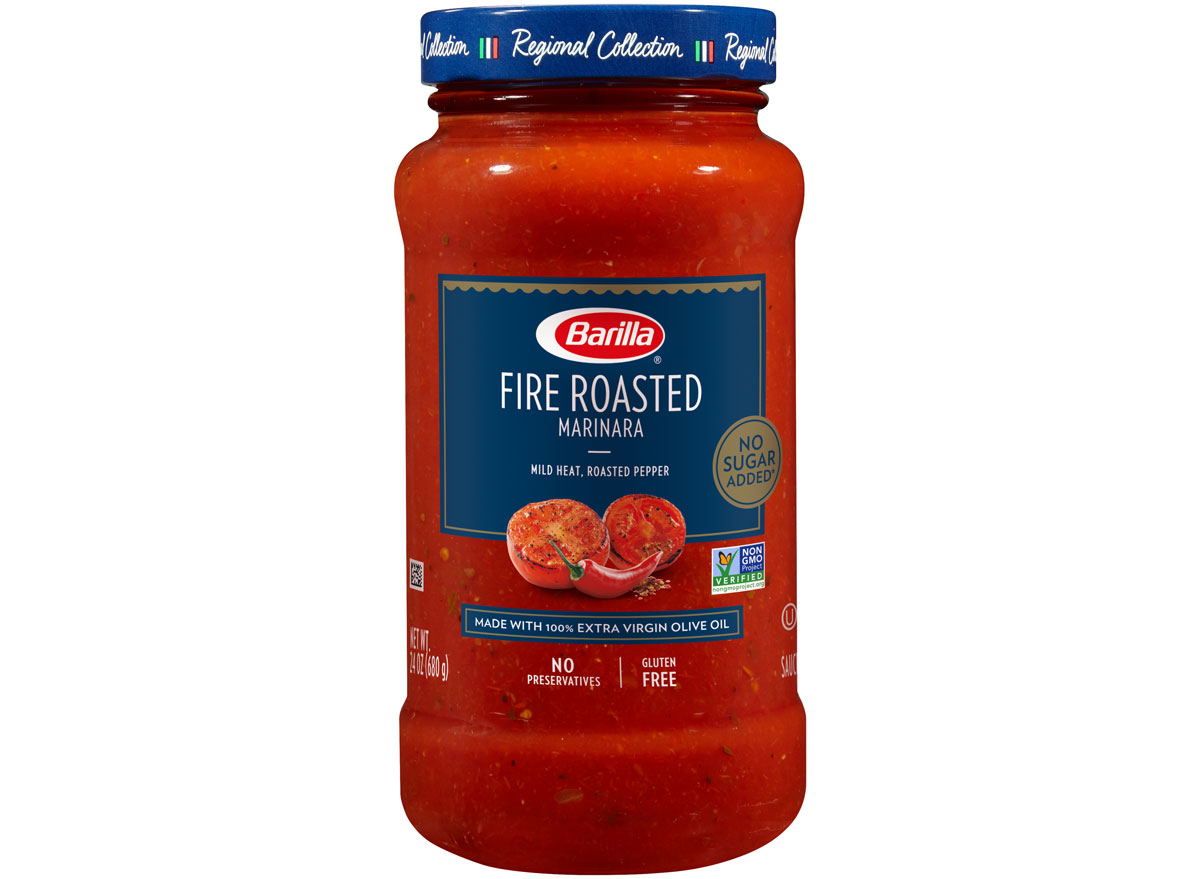 For a popular store-bought brand, this specific flavor of Barilla actually has a super healthy profile: it's low-cal and fat-free, plus packs more fiber and protein per serving than many other marinara sauces. Did we forget to mention the sugar? There's only five grams of sugar, too…so this really is a sauce you can feel good about serving. 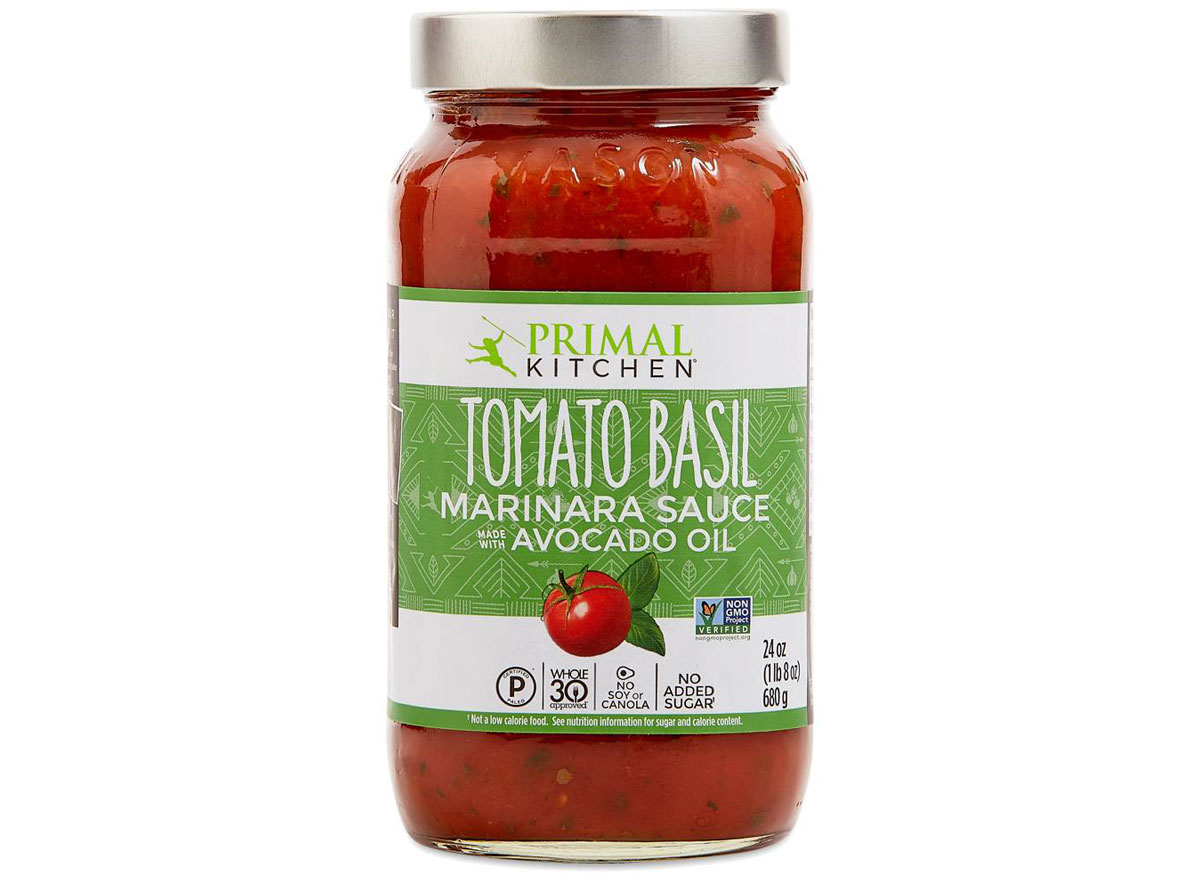 If you've gone on any kind of restrictive diet, you might already know about this diet-friendly pick from Primal Kitchen, which boasts an impressive roster of health accolades, from being soy- and gluten-free to being certified Paleo and Whole 30 approved. Plus, it's made with heart-healthy avocado oil instead of canola or soybean oil, so you'll get an extra boost of good fats. 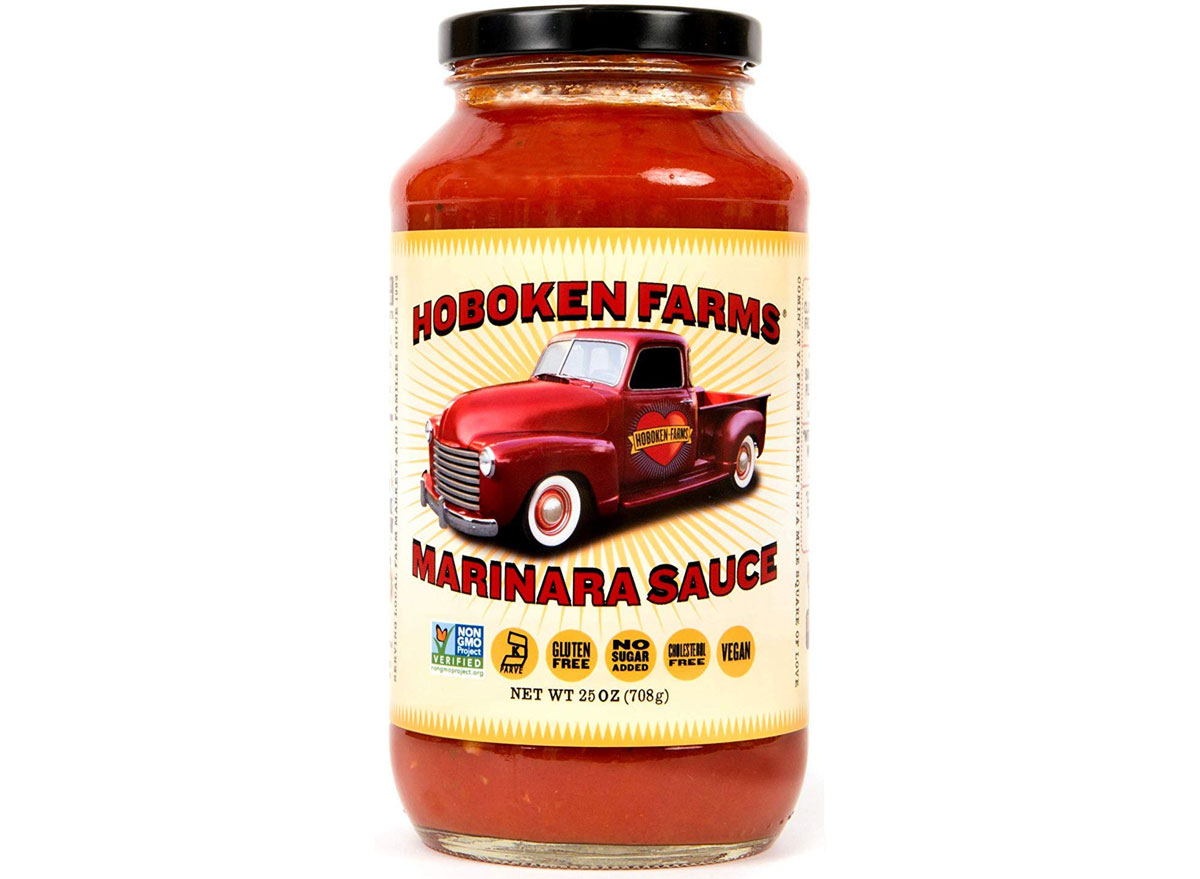 This farmer's market-originated marinara is keto certified with only six carbs and no sugar added. It's also good for Whole30 and low-sugar dieters, coming in at only three grams of sugar per serving. There are only four ingredients here, not including herbs and spices, and it's vegan and non-GMO as well. 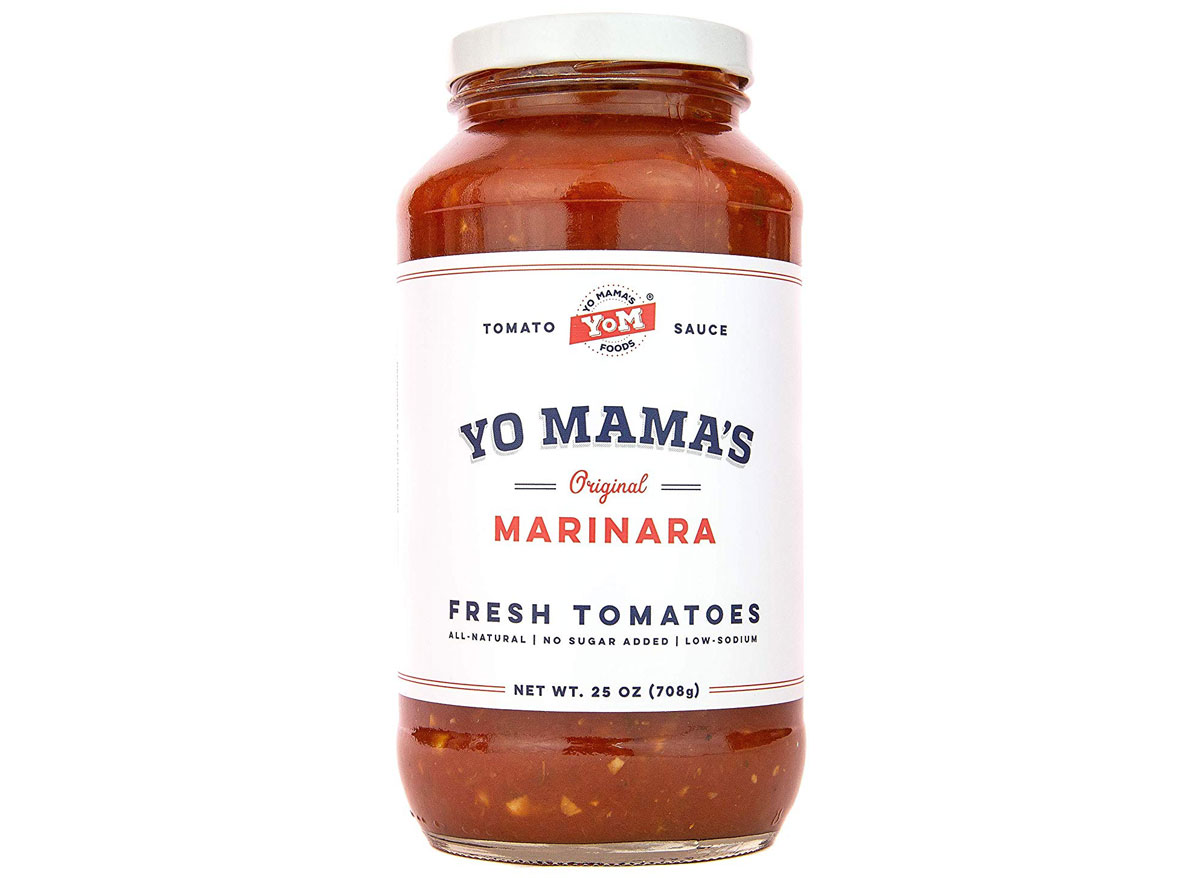 Is this low-carb spaghetti sauce a little bit pricey? Yes, but if you're really looking for a healthy sauce you can't beat Yo Mama's stats. This sauce has the lowest amount of sodium on this list and only two grams of sugar.