Even if you think you're eating a clean diet, you still may be consuming dyes and chemicals that carry potential health risks.

You know the beautiful pink hue that makes a salmon fillet look so delicious? And the toasty brown color that makes your cinnamon-flavored oatmeal look fresh from your own kitchen? Well, it's probably fake—and riddled with harmful chemicals to boot. And while that's not always the case, it's no secret that food manufacturers rely on color additives to make their products appear more appetizing. They also rely on these colors to communicate to consumers how their food will taste. (People know that a purple Skittle, for example, will likely taste like grapes.)

But these synthetic colors aren't just used in candy and psychedelic-colored sodas. Seemingly-innocent foods like pickles, oatmeal, and gravy actually rely on fake colors and flavors to achieve their look and taste as well. In fact, cheese and butter were the first foods for which the American government authorized the use of artificial coloring back in the 1800s, according to the FDA.

Since then, we've learned quite a bit about the harmful effects of these practices. For example, we now know that Yellow #5 and Yellow #6 (found in Butterfingers and M&Ms) promote Attention Deficit Disorder (ADD) in children. We've discovered that caramel color (abundant in coffee drinks, sodas, salad dressings, and soup) is a potential carcinogen. We also know that perfluorooctanoic acid (found in microwave popcorn)—the same toxic stuff found in Teflon pots and pans—is another potential cancer-causer. But that doesn't stop American food manufacturers from putting this wretched stuff in our food—despite the fact that other countries have banned the use of many of our most popularly-used chemicals.

There is a bit of good news, though. In response to consumer demand, a number of major food manufacturers are finally stripping unnecessary chemicals from their products. About a year ago, General Mills announced that they would eliminate artificial colors and flavors from their entire line of cereals, swapping out chemicals like red dyes for natural colorings from sources like vegetables, joining Kraft, Nestle and other large companies in a race to clean up their acts.

While we're definitely moving in the right direction, there's still an entire category of chemical-tainted foods that are going unnoticed: the "healthy" ones! Read on to discover which of your favorite wholesome eats are riddled with bad-for-you chemicals and dyes—plus, clean Eat This-approved alternatives for each naughty food. And for more insight into some of the more indulgent foods riddled with chemicals, check out these unhealthiest foods on the planet! 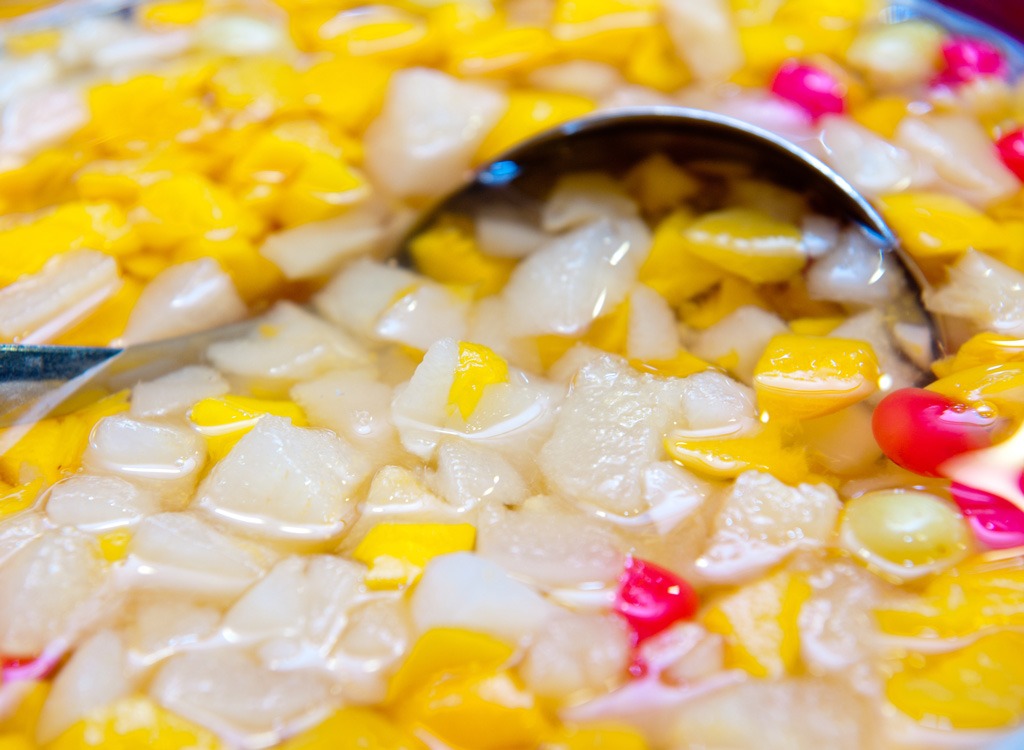 Fruit is among the most vibrantly colored food in the supermarket so it's a bit strange that so many manufacturers add things like Red #3 to their cans to make nature's candy looks even brighter. It just seems silly! Plus, Red #3 has been shown to cause thyroid tumors in rats. Our suggestion? Grab a fresh pear or an apple instead. They're both easy-to-eat on the go. If you prefer a mix of fruit, make a big fruit salad at the beginning of the week and pack some in a Tupperware container to enjoy at work or on the run. 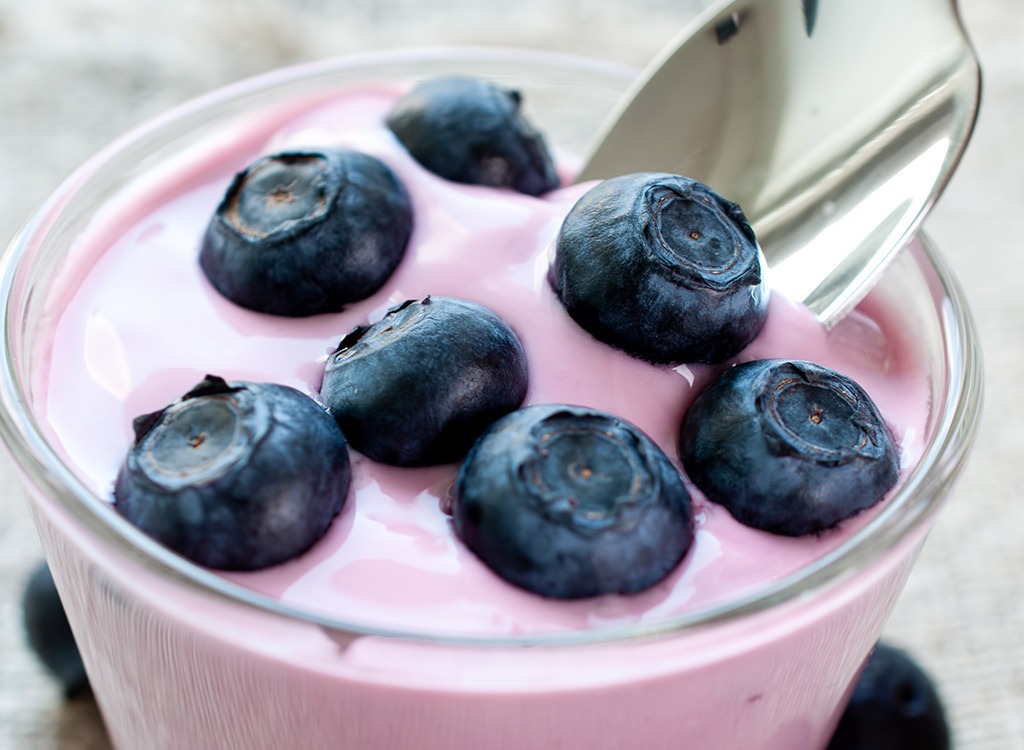 While wholesome Greek yogurt makers rely on novel things like real fruit and vegetable juice to color their flavored yogurts, other brands take shortcuts and save money by using chemicals like caramel coloring, Blue #1, and Red #40, a coloring agent that has been shown to trigger hyperactivity in children and immune system tumors in mice.

Not That! FAGE, Dannon Light & Fit

In it's purest form, oatmeal is one of our favorite superfoods. But once food makers start tinkering with added flavors, things can go awry. Quaker's line of high fiber instant oats contains caramel coloring (a possible carcinogen) in a number of their flavored packets. If you want to amp up the flavor profile of your cereal, we suggest reaching for natural add-ins like cinnamon and honey instead. You'll get the flavor you crave with next to no additional work. For more oatmeal inspiration, check out these best overnight oats recipes. Even if you don't go all in with the recipes, they can still give you a good idea of which fruits, spices, and natural flavors will pair well together in your cereal bowl.

You know you should be adding dressing to your greens to help your body absorb vital veggies nutrients, but not all salad toppers are made from real ingredients. A number of brands use caramel color to give balsamic, Italian, and Asian-style dressings their signature hue, while berry and Catalina dressings often get their vibrant colors from a mix of Red #40 and Blue #1. A number of animal studies have been done to examine the safety of Blue #1 with varying results. The Center for Science in the Public Interest says that further research needs to be conducted before it should be considered safe for human consumption. In the meantime, we recommend staying away from the stuff.

Last we checked, cucumbers are naturally green, so we're not quite sure why so many brands feel the need to add yellow dyes to their pickle jars. A number of them are also filled with sodium benzoate, which has been shown to damage mitochondria, an important area of DNA in the "power station" of cells. Eek—that's definitely not what you want to be shoveling into your mouth.

Nearly every supermarket in America is packed with cartoon-splattered boxes all touting their "natural" ingredients and "essential vitamins and minerals." In reality, though, the cereal aisle is more like a dark alleyway in a horror movie, where all sorts of fiendish villains—vampires, cavemen, blood-thirsty honey bears—lie in waiting. Inside their boxes, you'll find grains that have been stripped of their natural fiber and nutrients and spray-coated with sugar and chemicals. While nearly every box we looked at contained the preservative BHT, a highly controversial, potentially carcinogenic ingredient, it was the seemingly healthy ones (like Kellogg's Special K Fruit & Yogurt Cereal) that contained dyes like Red #40 and Blue #1, likely because leading kids' cereal manufacturer, General Mills, has vowed to stop using fake coloring.

Like oatmeal, popcorn is a wholesome whole grain that goes from healthy to hazardous once it falls into the hands of food manufacturers. Some of the most common scary ingredients found in commercial popcorn include caramel coloring, TBHQ, a form of butane (i.e. lighter fluid) the FDA allows processors to use sparingly in our food, and perfluorooctanoic acid (PFOA), the same toxic stuff found in Teflon pots and pans.

Eat This: Air pop kernels (check out these 20 Delicious Ways to Dress Up Your Popcorn for some healthy flavoring ideas), Quinn Popcorn

Unlike the real stuff that comes straight from trees, famous syrup brands like Aunt Jemima and Mrs. Butterworth are primarily composed of high fructose corn syrup, artificial flavors, and caramel color—all ingredients that have been connected to a slew of health issues, from fatty liver disease to cancer. Some brands even add sodium hexametaphosphate to their bottles. In animal studies, the chemical has been shown to inhibit growth and cause kidney swelling and bone decalcification. Though we can't be certain humans would experience the same side effects, do you really want to knowingly ingest something that could harm a living creature? We sure wouldn't. Another reason to stick with the real stuff: Grade A syrups have a concentrated sweet maple flavor, so a little bit goes a long way in terms of flavor. The less you need to pour on, the fewer calories and teaspoons of sugar you'll take it—a win if rapid weight loss is among your health goals.

Eat This: Maple Grove Dark Amber Maple Syrup or any other Grade A maple syrup

You bite into a protein bar to get hunger-quelling nutrition on the go. Sure, there may be some protein and fiber in your bar of choice, but odds are good you're also getting a hefty serving of caramel coloring and zinc oxide, the chemical that lends sunscreen its milky white hue. Yum? Not so much… 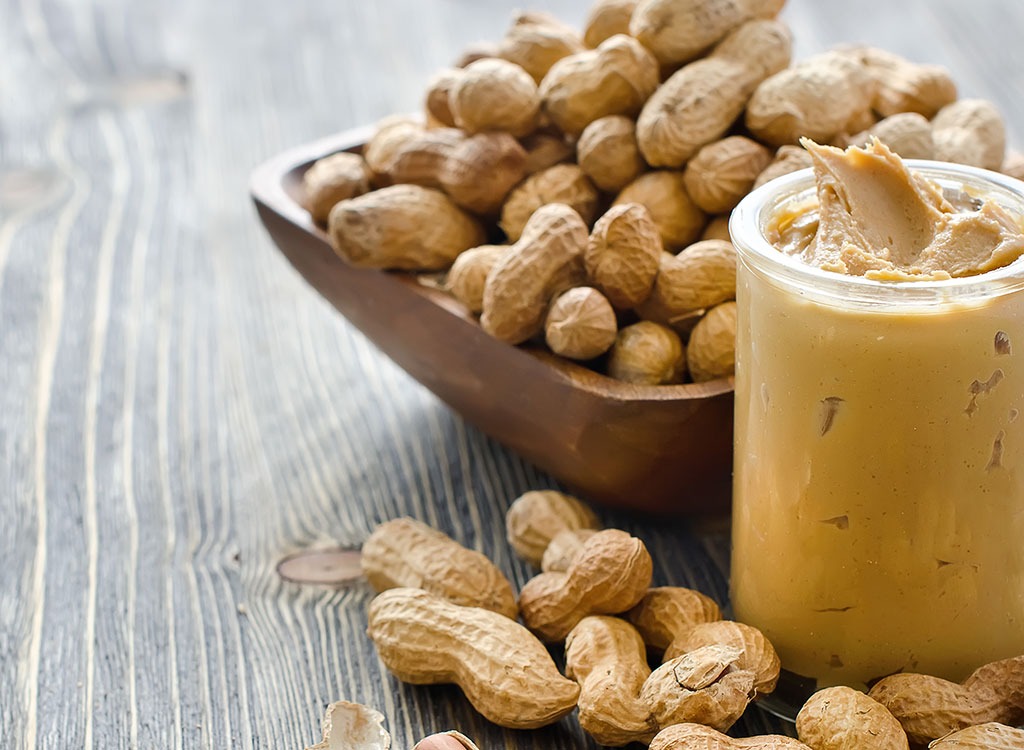 Unless your peanut butter is made solely from nuts and salt, put it back on the shelf. Conventional spread like Jif and Skippy load their products with man-made (read: artery-clogging) partially hydrogenated oils and zinc oxide (that's the stuff that makes sunblock white). To find out how your go-to nut butter stacks up against the competition check out our exclusive report, The 36 Top Peanut Butters—Ranked!.

Caramel color and monosodium glutamate (an additive that has been shown to increases appetite) are abundantly present in the jerky aisle. Stick to the high ranked items in our report, The Best and Worst Beef Jerky to ensure your high-protein snack is a clean eat.

For active people on the go, a bottled protein shake can seem heaven-sent. Sure, they're marketed as easy ways to replenish lost glycogen stores and lose weight, but the reality is that the majority of these shakes and smoothies are really just liquids spiked with things like zinc oxide, Red #3, caramel color, and artificial flavors and sweeteners. Our advice? Kick these bad boy bottles to the curb and make a shake of your own with one of these top-rated protein powders. If you're really in need of something pre-mixed. We're fans of Orgain Grass Fed Protein Nutritional protein shake. 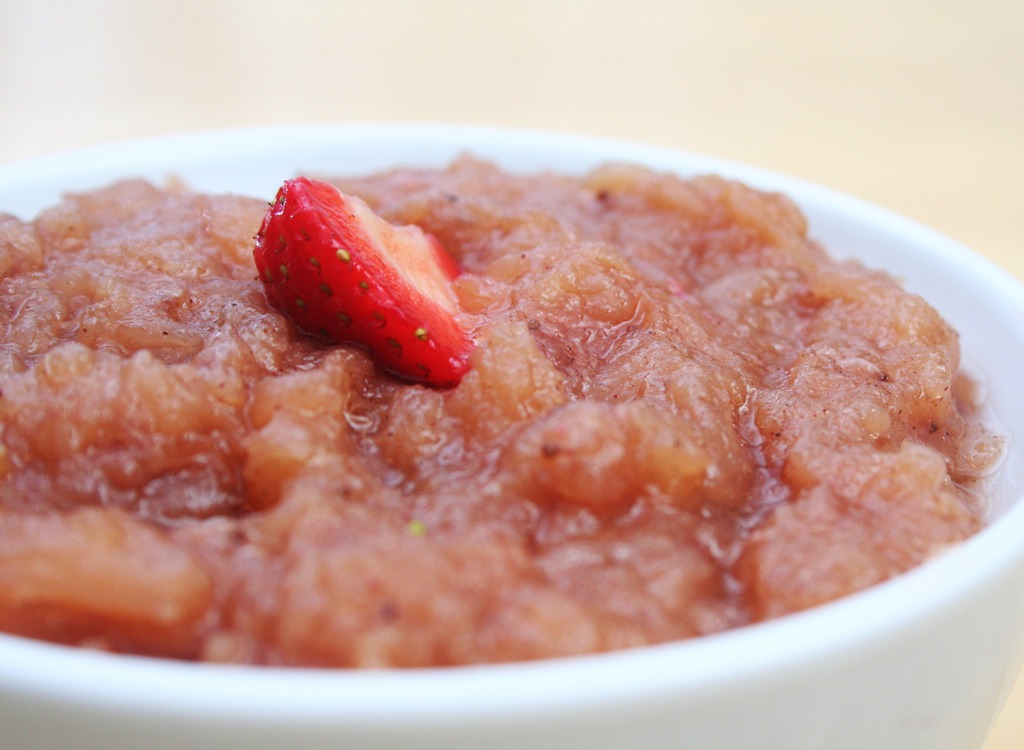 Sometimes it's better to shelf the creativity and stick with the original—and when it comes to flavored applesauce, this couldn't be more true. (And what's the point of eating an applesauce that tastes like some other fruit, anyways?) Instead of relying on whole fruits and extracts, food makers toss Red #40, Blue #1, and Yellow #6 into their containers to give them a vibrant hue. And speaking of bad news apples, be sure to find out The Worst Way to Eat an Apple! 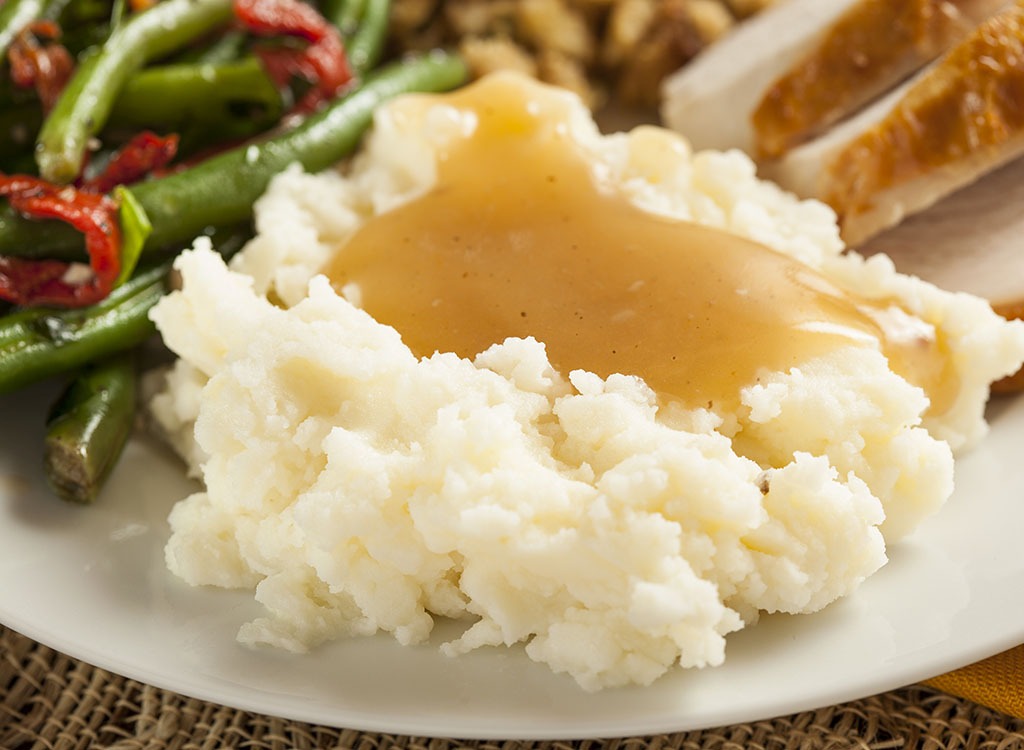 If gravy is brown when you make it on your stovetop, why do food manufacturers have to dye it that hue with caramel coloring? The world may never know! If you don't have time to make your turkey-topper from scratch, stick with an organic variety to ensure your wholesome meal doesn't become tainted with chemicals.

Not That!: McCormick Country Gravy Mix

What if I told you that every time you spooned a warming serving of soup into your mouth you were ingesting Yellow #5, Yellow #6, monosodium glutamate, caramel color, and maltodextrin (a caloric sweetener and flavor enhancer made from rice, potatoes or cornstarch that has the potential to raise blood glucose and insulin levels. Would you still eat it? Though not all store bought soups are spiked with these unsavory ingredients, a number of them are. Stick to our Eat This picks to keep these sketchy additives out of your bowl.