Chick-fil-A's two new breakfast options are deliciously similar—except one is worse for your waistline than the other!

If you've been hitting up Chick-fil-A for lunch, consider this a reason to pay the chicken chain a visit a little earlier in the day. Chick-fil-A recently debuted two new breakfast items in an effort to "provide a wide range of options to our guests who are looking for a fast and delicious breakfast," Amanda Norris, senior director of menu development at Chick-fil-A, said in a press release. These two new a.m. options are (drumroll, please)… The Hash Brown Scramble Bowl and The Hash Brown Scramble Burrito.

So which is best for your belly? We dive in below! 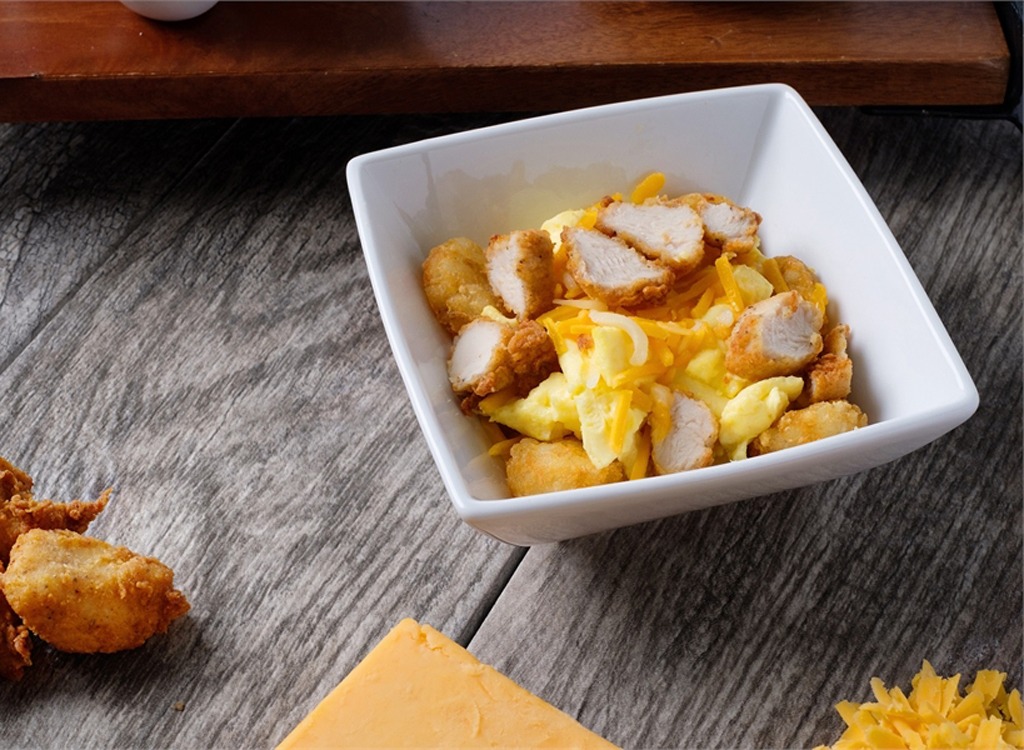 The Hash Brown Scramble Bowl is filled with crispy Chick-fil-A Hash Browns, scrambled eggs, a blend of Monterey Jack and cheddar cheeses, Chick-fil-A Nuggets, and served with a side of Jalapeño Salsa. All of this savory goodness clocks in at 450 calories and 30 grams of protein. "It is a great fit for those seeking a delicious and hearty breakfast that is also packed with protein," Norris said. "We've definitely seen an increase in popularity for breakfast bowls."

The Hash Brown Scramble Burrito (which contains the same fix-ins wrapped up in a soft tortilla) packs in 650 calories and 31 grams of protein. For only an additional gram of protein, choosing the eggy burrito will cost you an extra 200 calories, mostly comprised of empty carbs—a definite no-go for your waistline.

The new hash brown–stuffed burrito is replacing the current breakfast burrito, which contains basically the same ingredients but boasts fire-roasted onions and peppers instead of crispy hash browns. The original breakfast burrito also boasts the same amount of calories and protein as the Hash Brown Scramble Bowl—which is actually 200 calories less than the new burrito! So while we're definitely sad to see the original burrito go, we're glad Chick-fil-A is offering the new breakfast in a bowl style to help cut calories.

If you've already noticed the Hash Brown Scramble entrées on your local Chick-fil-A's menu, it's because the chicken joint tested these items back in 2016 in New York and New Jersey, as well as select locations in California, South Carolina, and Washington, DC.

"In the past few years, we have been more focused on adding different flavors, like the Hash Brown Scramble Bowl and Burrito, and nutritious options, like our Egg White Grill […] to our breakfast menu," Norris said. The Egg White Grill Norris mentioned just happens to be one of our favorite Fast-food Breakfasts Under 360 Calories, boasting an impressive 25 grams of protein for just 300 calories!

Make sure you wake up hungry tomorrow morning, because these delicious new picks have officially hit stores nationwide. But if you're not a fan of eating out for breakfast, steer clear of The One Menu Item You Should Never Order At Chick-fil-A during lunchtime.