6 Yogurt Brands To Stay Away From Right Now

They may be "seemingly" healthy, but what's actually in them may surprise you.

When it comes to delicious foods that fit your nutrition goals, yogurt easily checks the box for many people. And lucky for us, there are almost too many yogurts to choose from. According to the latest reports by Statista, yogurt is a highly-competitive industry, generating $7.24 billion in annual sales in the U.S. alone.

Most already know the health benefits that yogurt offers – its ability to improve your gut health, minimize food cravings and support bone health. The latest yogurt innovations have risen to popularity with wellness in mind. But if you want all the positive effects of this probiotic-rich food, you're going to have to be a little pickier with which varieties you choose for your cart.

"Yogurt contains protein, probiotics, and calcium. It is also fairly low in calories making it a weight-loss friendly food," says Eat This, Not That! Medical Expert Board member Lisa Young, PhD, RDN, author of Finally Full, Finally Slim, a nutritionist in private practice, and adjunct professor of nutrition at NYU. "Many yogurts, however, have too much sugar, so reading labels is important."

Because not all yogurt is created equal, whether it's due to false advertising, poor quality standards, or detrimental additives, the yogurts made by these six brands should probably stay off your list. As for yogurts you should buy, we have that list handy for you, too. 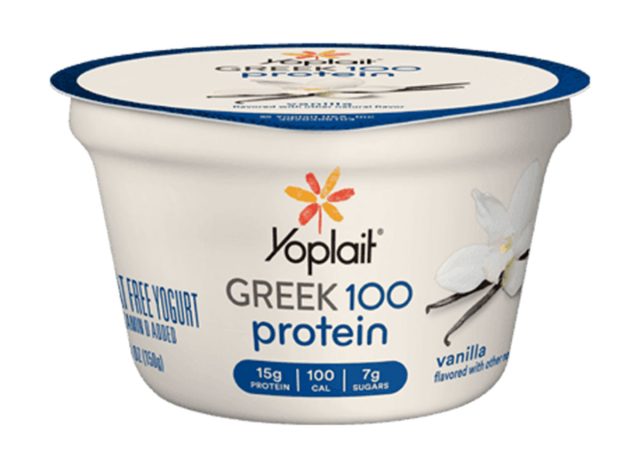 The popularity of Greek yogurt has risen rapidly, as many nutrition experts tout the advantages of the thicker, creamier offering over traditional yogurt. Statista reported that Greek yogurt has 51% of the yogurt market share. While it's no secret that expanding into Greek-style yogurt might be a competitive move, it is something that Yoplait tried early on, but with poor – and potentially harmful – execution.

The Twin Cities Business Journals reported in 2012 that General Mills Inc. was being sued for defrauding consumers with their subsidiary Yoplait's "Greek Yogurt." The claim stated that the product could not be categorized as yogurt. Rather than straining the yogurt to create the thicker texture of Greek yogurt, Yoplait added milk protein concentrate (MPC), a dry milk powder. According to the lawsuit, this ingredient is not listed by the FDA as an ingredient acceptable for use in yogurt production.

The suit was eventually dismissed in court to be handled by the FDA, but it pokes a gaping hole in the standard of processing and marketing that the company stood by.

Yoplait's current addition of Greek 100 yogurt is the brand's way of announcing they're in line with real Greek yogurt products. However, our expert would still pass on this at the grocery store. "While this yogurt is high in protein, I'd leave it on the shelf as it contains these artificial ingredients: Acesulfame Potassium, and Sucralose," says Young. 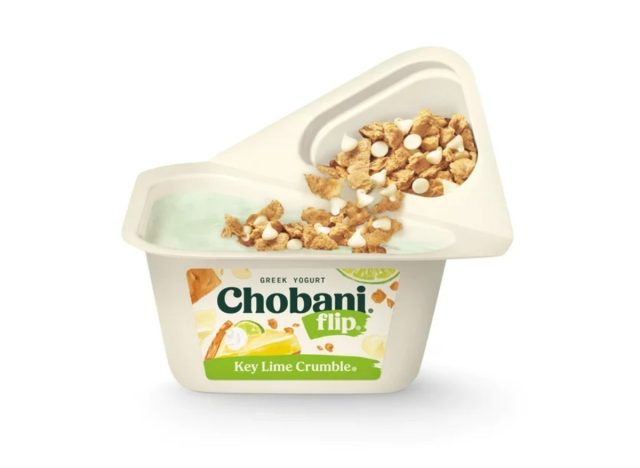 Chobani is known for its Greek yogurt, and while the brand does have some high-quality benefits, such as each container being made with live probiotics and being high in protein, not all of its products have the same benefits. Their plain flavors may not have any added sugar, but when it comes to their Flip product line, you need to be careful of those extra toppings.

Although the brand mentions that the Flip yogurts contain only natural mix-ins, you're still getting the additional sugar from the ingredients. Take their key-lime pie Flip flavor, for example. Its key lime yogurt is topped with a key lime pie crumble made of graham crackers and white chocolate. Sounds delicious, right? While that may be true, your body is consuming a total of 12 grams of added sugars from ingredients like soybean oil, brown sugar, and cocoa butter.

If you're looking for a protein-filled yogurt, there are better Greek yogurt options (and most of them won't have those added garnishes). 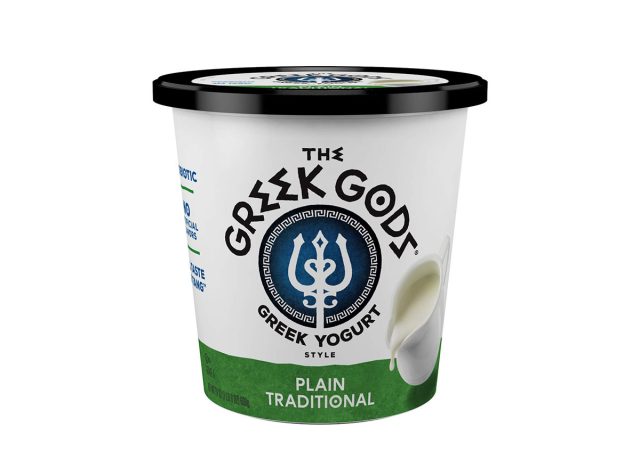 Greek Gods shouldn't be your first choice for a high-protein yogurt. The company calls it "Greek-Style yogurt" because the yogurt doesn't go through the same straining process that traditional Greek yogurt does in order to have a lower-sugar, higher-protein dairy product. While there's nothing wrong with the "pot set" method Greek Gods uses, where the yogurt ferments in the container you buy it in, the issue is that you may be expecting the same benefits of Greek yogurt when you pick up this container. Therein lies the problem.

Without straining the yogurt, you're left with a serving that only comes in at 7 grams of protein—around half that of what real Greek yogurts have. And while this flavor uses no added sugars (which is definitely a plus), it still has 9 grams of sugar, which is more than how much protein there is. Those who don't eat dairy aren't safe from unhealthy yogurts, as plant-based can provide the same amounts of fat and sugar as traditional versions. The Coyo Coconut Yogurt Alternatives are an example of that. Their yogurts, including their Natural flavor, are made from pure coconut, which may sound healthy, but that's not necessarily true if you're eating it in excess. Although you see coconut as a beloved topping on most things (including yogurt), eating large amounts of this high-calorie, high-fat food may have the same weight gain-promoting effects as "unhealthier" options.6254a4d1642c605c54bf1cab17d50f1e

This plain traditional coconut yogurt comes in at 390 calories for a 5.3-ounce serving. There are also 38 grams of fat and 36 grams of saturated fat per container, which is the equivalent of 180% of your daily recommended intake of saturated fat. 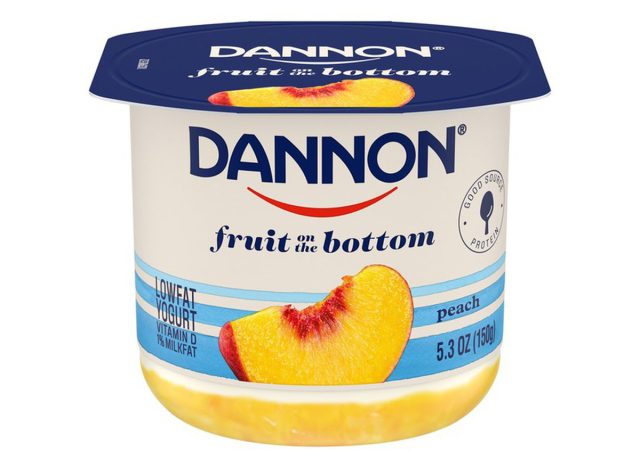 Remember Danimals? You may have been familiar with this brand as a child, sipping their drinkable yogurts at recess. But just because it's nostalgic doesn't mean you should stock it in your fridge. "Many of [Dannon's] yogurts are high in added sugar, with more than 2 teaspoons per serving," says Young.

For example, Dannon's Fruit on the Bottom Peach Lowfat Yogurt has 21 total grams of sugar per serving, 15 of which are added sugars.

The company also produces several lines of nutrition-targeted yogurts –  including DanActive, Activia Light, and Activia – with dubious claims made about their ingredients in the past.

In 2009, Dannon paid $35 million to settle a class-action lawsuit in California over false advertising that its probiotic line of yogurts could produce "clinically and scientifically-proven health benefits," according to the Canadian Society of Intestinal Research. Dannon marked these products up by 30% while allegedly knowing that the benefits were unproven.

The case's lead attorney stated, "Deceptive advertising has enabled Dannon to sell hundreds of millions of dollars worth of ordinary yogurt at inflated prices to responsible, health-conscious consumers."

Dannon has since cleaned up its act, sticking to more sensible claims, such as marketing Activia to help with "supporting gut health and contributing to the maintenance of a balanced gut microbiota." But between this and the added sugar, it doesn't inspire much faith in the quality of their dairy products. 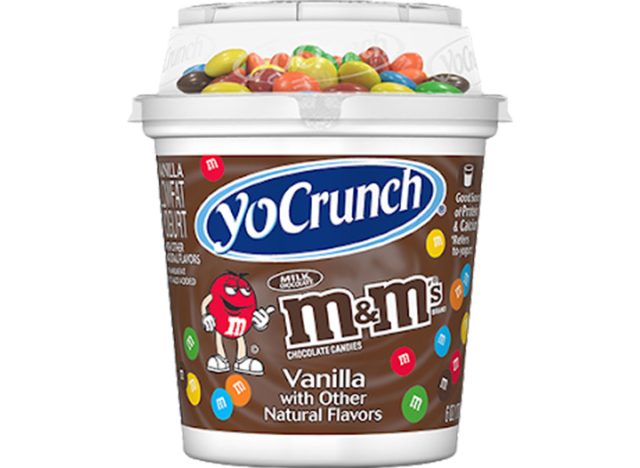 Unfortunately, no, you can't just add this gut-friendly snack to candy-coated chocolate and expect it to still work its magic. The 15 grams of added sugar (and 19 total grams of sugar) in the Vanilla M&M Yogurt may work to reverse the benefits you would get from the yogurt on its own.

According to Young, one container of this yogurt includes over twice the amount of sugar you should aim to have in a serving. Besides contributing to weight gain, too much sugar can negatively alter your gut microbiome, killing off good bacteria and feeding the bad bacteria.

While the cup of M&M topping makes this considerably more exciting to eat, it's not a great grab-and-go breakfast to have each day. "This yogurt isn't an optimal choice," says Young. "It's relatively low in protein compared to other yogurts and contains 2 teaspoons of added sugar."

"M&Ms are OK once in a while as a fun snack, but it certainly wouldn't be a healthy choice to add to your yogurt as a topping. Berries or crushed nuts are a much healthier option," she adds. Either leave it on the shelf or maybe buy a few as an occasional dessert. But if you do, be aware that it is just a dessert – you won't get any nutritional help from this one.

A previous version of this article was published on July 7, 2022.