22 Easy Ways To Cut Back On Carbs

You won't even realize you're limiting your intake with these sneaky shortcuts.

Nobody said losing weight was easy, but a lot of people make it harder than it has to be, especially when trying to cut carbs. Just because you're looking to slim down doesn't mean you need to torture yourself by removing them from your diet cold turkey. Not only is it possible to cut too much and deprive yourself of energy, but going from daily bagel breakfasts to no bread at all can cause massive carb cravings.

Instead, how about incorporating healthy hacks a little bit at a time to get yourself used to a life with less of the starchy stuff? You don't need drastic measures, just some of these simple steps we've rounded up that'll push you towards progress with changes you can handle. And for more healthy cooking tips, check out our list of 21 Best Healthy Cooking Hacks of All Time.

Cookies, cakes, and pastries might be delicious, but they're not doing anything to help with your carb addiction, Cozzolino points out. So it's best to get them out of your pantry, as they only fuel cravings and blood sugar spikes. You'll get your baked-bread fix from a healthy pizza soon enough.

Most Americans get only about half the 20 to 30 grams of daily fiber they should. That means they are missing out on the best way to reduce cravings and fight diabetes. Because fiber isn't broken down in digestion, it doesn't raise blood sugar and actually slows down the flow of sugar into the bloodstream. Get your fiber from whole-grain cereals like oatmeal, low-sugar fruits like berries, apples, and grapefruit, and vegetables, such as broccoli, kale, string beans, cauliflower, onions, peppers, beets, potatoes, and more. One study showed that people who ate 26 grams of fiber per day experienced an 18% reduction in their diabetes risk when compared to people who ate less than 19 grams a day.

Filling up on water can actually keep you from overeating in the first place. Often people mistake thirst for hunger and reach for a fork instead of a glass of ice water. One study found that simply drinking a glass of water before meals helped people lose weight over a 12-week period. But just be to stay away from diet soda. Studies show that people who drink diet soda have higher waist measurements and increased belly fat.

Wrap up burgers or tacos in lettuce.

You already put lettuce in your burgers and tacos, so why not use one of the crisp leaves to hold everything together? That's right, throw out your buns and shells the next time you start grilling. And since there's only one single gram of carbs in an entire cup of lettuce, your simple swap will go a long way. Try it with one of these 13+ Best Healthy Hamburger Recipes for Weight Loss! 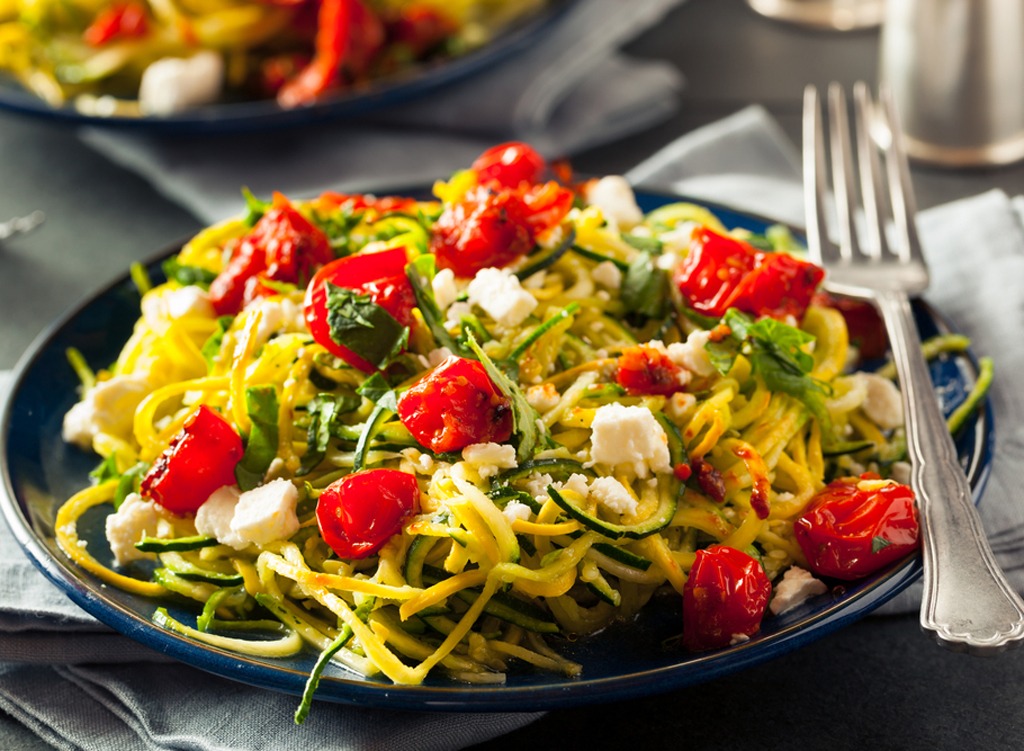 The first thing you probably thought of when you considered cutting carbs was probably all of the creamy, delicious pasta you'd be cutting out of your life. With visions of Olive Garden dancing in your head, you ultimately decided a low-carb diet just wasn't for you. But what if you didn't have to wave goodbye to your favorite wavy noodles? By purchasing a spiralizer and some ripe zucchinis, you could be scarfing down plates of guilt-free veggie pasta in no time. Here are 19 Creative Foods to Spiralize That Aren't Zucchini. 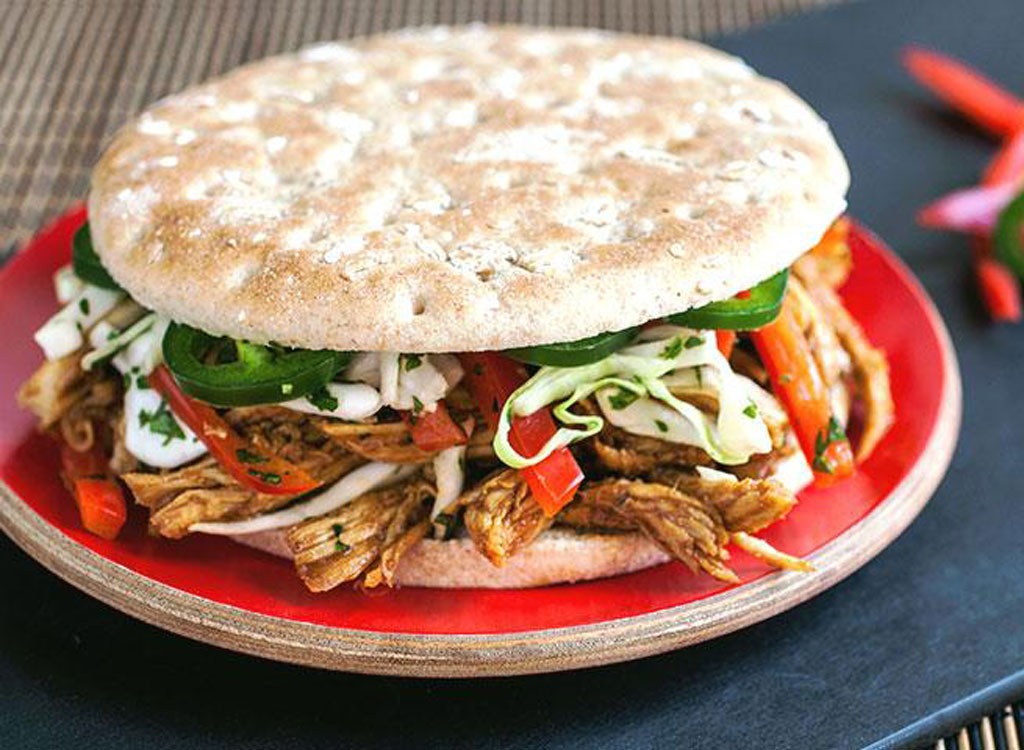 It's hard to imagine a life without bread—cream cheese would be rendered obsolete, not to mention peanut butter and jelly—so it's a good thing you don't have to. There's a way to keep your beloved bread products in your life even if you're carb-cutting; next time you're at the grocery store, just look out for thinner slices. Bagel "thins" and Arnold's sandwich "thins" (pictured above), true to their name, provide a base for your favorite breakfast and lunch staples while slashing carbs and calories.

Crazy idea here, but how about the next time you have a sandwich, only use one slice of bread? Think about it: If you order a whole-wheat with turkey and cheese from Subway every day, eating it open-faced will save you close to 150 grams of carbs a week. Talk about a simple change with not-so-simple results! Try even more healthy eating hacks with our list of 9 Easiest Ways to Start Eating Healthy.

No rice? No problem. For a tasty side that meets your carb-cutting standards, replace your usual mound of white rice with cauliflower rice. The chopped veggie may look the same and have a similar texture, but the comparisons stop as soon as it enters your body. Because it's nutrient-rich and low-carb, you're free to go for seconds without widening your waist.

Ultra-processed foods are the "formulation" of multiple processed ingredients. On top of the added salts and sugars, this "ultra" distinction includes substances not generally used in cooking like flavors, colors, emulsifiers, and other additives designed to imitate the qualities of "real food." So, what are these exactly? Think sodas, cheesy chips, chicken nuggets, and instant soups. According to a study published in BMJ Open, additive-laden foods make up almost 60% of our daily calories. While ultra-processed foods are tailored to appeal to our taste buds, they're often lacking in valuable nutrients—like fiber, antioxidants, vitamins, and minerals—which have been found to combat and protect against
the very same health issues that ultra-processed foods cause.

Serve crudite instead of crackers.

Ditch the pita bread you've been dipping into your hummus, and while you're at it, throw away the crackers you've been slapping slices of cheese on. That being said, you don't need to take a spoon to your dip or bite into a hunk of Havarti. Instead, pick up some crudites next time you're at the grocery store and use these veggie chips to scoop up your faves. "Veggies are low in carbs, but high in fiber and get just as much guac in your mouth as a chip does," explains Amy Shapiro, MS, RD, CDN. All that means is you'll get added nutrients, minus the carbs.

Use a thinner crust.

If you love pizza too much to abstain, at least ditch the deep dish. By going for a thinner crust, you'll get the taste you love without sacrificing an unnecessary amount of carbs to get it. Not only that, but you'll also be reducing your refined white flour consumption. This primary crust ingredient, which made it onto our list of The 21 Unhealthiest Carbs In America, can leave you wanting more when it spikes your insulin levels.

For those of you who are dedicated to this diet change with just one exception, don't worry. You don't have to give up your avocado toast. Instead, get creative with sliced sweet potatoes and use them as a base fresh out of the toaster. You won't miss your crunchy whole wheat, trust us. You'll just wish you'd thought of this before. Here's a Quick and Easy Sweet Potato Toasts Recipe you can try.

If you kick every morning off by drinking a freshly blended green smoothie, that's great and we applaud your efforts—but there's always room for improvement. Bet you never thought about all of the carbs you were chugging when you dumped a bunch of frozen fruit into the mix, but the sugars found in your fave fruits act as carbs in your body. So, start tweaking the ratio and replacing some of these with veggies like spinach, carrots, or kale for a lower-carb breakfast beverage.

Can't give up the crunch? Good thing you don't have to. While we don't recommend reaching into a greasy bag of chips every time you get hungry before lunch, you can find the same texture in a bag of kale chips. These green alternatives usually have less to offer in the carb department, as well as much more Vitamin A for healthier teeth and skin—it's a win-win! Or try making kale chips at home!

Peanut butter toast—whether you left that childhood favorite in the past or still slather that spread on whole wheat every morning before work, there's a better way. Reach for sticks of celery instead. You won't just be slashing your carb levels, but ridding yourself of a major morning calorie count as well. We recommend subbing in some almond butter while you're at it for some seriously nutritious noshing.

It's not enough to know to avoid added sugars and highly-processed foods. You still have to eat! Knowing the right swaps to make can help you enjoy similar flavors without the negative impact on your body. For example, have a homemade sparkling pomegranate tea over ice (pomegranate tea brewed in 1 cup sparkling water) instead of a Mountain Dew Code Red and you'll save 37 and 38 grams of carbs and sugar, respectively, and 133 calories.

Everybody knows that milk alternatives like soy, almond, oat, and coconut milk are great choices for those with a lactose intolerance. But what you probably didn't know is that these other options tend to have much lower levels of carbs because they're missing out on the milk sugar (lactose) in the regular stuff. Start small: Add it to your coffee, pour it into your cereal bowl, and soon you'll choose to chug these alternatives over glasses of milk. Here are The 8 Best Almond Milks to Buy, According To Nutritionists.

Cut carbs by cutting cravings. If you incorporate more protein into your diet, this satiating stuff will keep temptations at bay. With a protein-rich breakfast—think Greek yogurt or an omelet, for example—you'll be less likely to reach for your favorite carb-laden snacks as lunchtime draws closer. "This helps to improve post-meal satiety and prevent the afternoon energy crash and subsequent sugar craving," explains Miriam Jacobson, MS, RD, CDN. 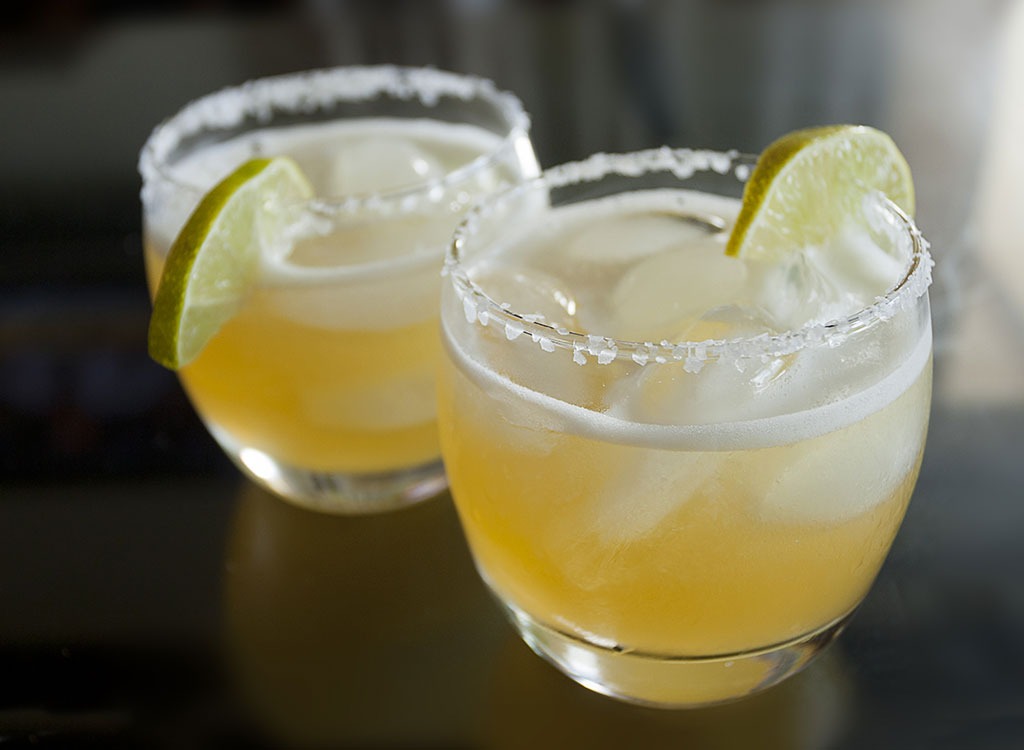 Not the drinks, anything but the drinks. You'll cut carbs everywhere else, but the rich, sugary cocktail menu staples are where you're going to have to put your foot down, right? Wrong. With a simple swap, you don't have to avoid alcohol altogether to avoid carbs. Keep things simple by ordering your drink on the rocks or getting a glass of wine. Don't believe us? Read up on these healthy hacks and the other boozy beverages Diet Experts Order At The Bar.

Bananas to the rescue! Banish carbs by getting creative in the kitchen with one of our favorite fruits. Use slightly underripe ones to make "nice" cream that the scale will love just as much as your sweet tooth. Then mix any leftovers with eggs (two per banana) for yummy pancakes you'll flip for.

Just because there's lettuce and maybe a broccoli floret on your plate doesn't mean you're in the clear. Restaurant salads can be higher in calories than a cheeseburger and fries, topping out at 1,000 calories and a day's worth of sodium. And those light salad dressings aren't any better They often make up for the lower calories by overloading the sugar, salt, artificial sweeteners, and preservatives. Ask for regular dressing and cheese on the side so you can control calories and prevent a good idea from turning into a fat one.