Osteoporosis, a disease that makes your bones weaker and more likely to break, affects 10 million Americans. Meanwhile, another 44 million Americans have low bone density, meaning they're at risk of developing osteoporosis. So, why does this matter? Well, because of osteoporosis, one in two women and one in four men will break a bone in their lifetime. To put that into perspective, that's higher for women than their risk of having a heart attack, stroke, and breast cancer combined.

When it comes to preventing this bone disease, experts say your lifestyle—what's in your diet, how often you do strength training exercise, whether or not you smoke or drink alcohol—plays a major role. Specifically, they warn that certain drinking habits can increase your risk of osteoporosis, and should be avoided at all costs.

Below, registered dietitians share some habits that you'll definitely want to kick for the sake of your bone health.

Your bones rely on certain key nutrients to maintain their strength—like calcium and vitamin D. Alcohol increases how much calcium is excreted in your urine, while also interfering with vitamin D production, according to Samantha Cassetty, MS, RD, co-author of Sugar Shock. When you're consistently deficient in these nutrients, your bones become weaker.

"It's a double hit to your bones," she explains. "Plus, chronic heavy alcohol use can cause hormone disturbances that may impact your bone health. For instance, women may experience irregular periods and lower estrogen levels, which can raise the risk of osteoporosis. And heavy drinking can raise the stress hormone cortisol, which can reduce bone formation and also break down bone—another double whammy."

Many Americans consume more than 3,500 mg of sodium per day, which is double the maximum recommended intake and seven times what the body needs to function.

According to Catherine Gervacio, RD with Living Fit, studies have found that sodium increases how much calcium is passed through your urine. And higher calcium excretion is linked to lower bone mineral density.

Commercial sports drinks can have anywhere from 100 to 300 milligrams of sodium per serving. In other words, in order to ensure your body holds onto enough calcium, you're better off drinking plain water to stay hydrated.

Another substance that can increase calcium excretion through your urine is phosphoric acid, says Michelle Rauch, RDN. Unfortunately, soft drinks just happen to be loaded with this ingredient, which gives beverages their tangy taste and prevents mold growth.

That's not all, though. "The caffeine in soda can also interfere with calcium absorption and lead to bone loss," adds Rauch.

A 2020 study in Nutrients found that daily soda drinkers had almost five times the risk of fractures compared to people who didn't drink soda.

"Another issue is that if you're drinking soda, you may be missing out on other nutritious foods and drinks that have bone-strengthening nutrients," says Cassetty.

Whether you buy cow's milk, almond milk, or oat milk, not seeking out products that are fortified can be a big mistake as far as supporting your bone health is concerned. That's because fortified milk contains an extra boost of calcium and vitamin D.

Still not convinced? A 2015 study in Archives of Public Health found that consuming fortified dairy products daily reduced the incidence of osteoporotic fractures in older adults.

RELATED: The #1 Drink To Keep Your Bones From Aging 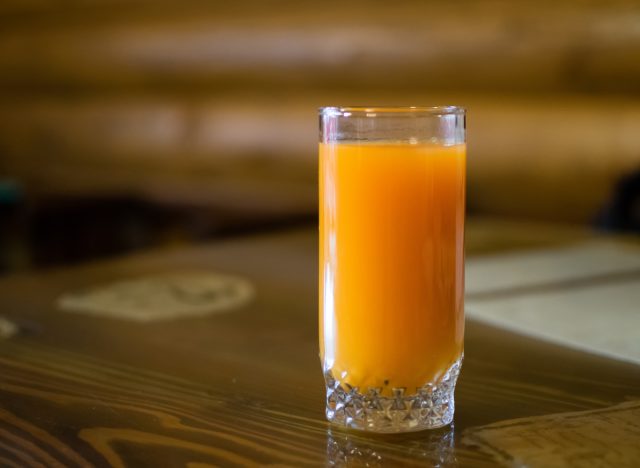 You might want to take a peek at the nutrition label next time you buy a bottle of juice because oftentimes these beverages contain added sugar. And whether you know it or not, that sugar can take a hefty toll on your bone health.

A 2021 review in Nutrition Journal found that drinking more sugar-sweetened beverages can negatively impact bone mineral density in adults. According to a 2018 review in Missouri Medicine, over-consuming sugar increases your risk of osteoporosis in multiple ways. For one, it increases how much calcium and magnesium (both bone-strengthening nutrients) are excreted through your urine. Not only that, but it also reduces how much calcium your body can absorb by lowering the levels of active vitamin D in your system.