Unlike plain yogurt, Greek yogurt is strained to remove the whey, resulting in a thicker consistency. Greek yogurt can be pretty tart and bitter. However, many brands have picked up on this and decided to add flavors and mix-ins to this popular yogurt to give it a better flavor and appeal to the masses. With that said, this process has taken a product that naturally contains high-quality ingredients and diminished the quality for the sake of taste and flavor.

All dairy-based yogurts are going to contain some naturally-occurring sugar, however, you'll want to keep an eye out for excess added sugar.

"When you look at the label, you might want to avoid Greek yogurts that contain a ton of added sugar," says registered dietitian Breanna Woods. "I usually look for something with 10 grams or less per serving if I'm shopping for individual cups."

Additionally, Woods advises to look out for artificial sweeteners, which have a tendency to trigger headaches or bloating.

One last ingredient Woods says to be aware of is chicory root. "This is a prebiotic fiber so it's mostly beneficial, as it feeds good bacteria in the gut. However, it could cause gas, bloating, and even diarrhea for some people, especially anyone intolerant to FODMAPs or anyone not used to taking in a lot of fiber."

With that information in mind, here are eight greek yogurts with the lowest quality ingredients that you can buy right now.

RELATED: 4 Best Store-Bought Pies To Save Your Thanksgiving 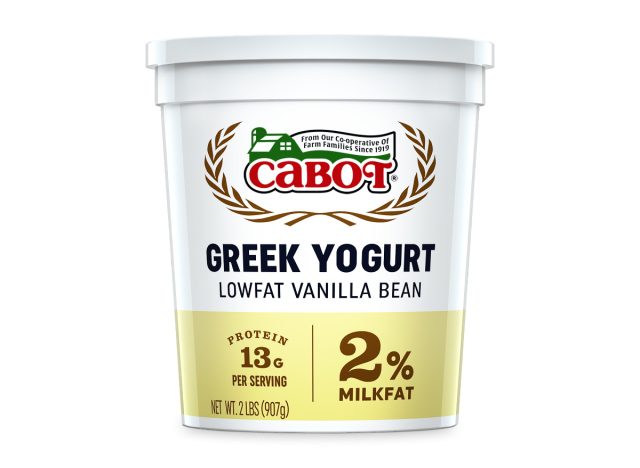 Out of all of the Greek yogurts on this list, this vanilla bean one has the highest amount of added sugar at a whopping 18 grams per serving. However, you'll find a significant amount of vitamin D and vitamin A, which is an added benefit to this brand.

While this Greek yogurt has a significant amount of protein, don't let that fool you into thinking that it's one of the better options. Like Woods mentioned above, this Greek yogurt contains chicory root fiber, which has been shown to cause gas, bloating, and diarrhea in some people, so you'll want to proceed with caution.

Although this Greek yogurt contains no natural flavors, it is loaded with added sugars which Woods advises to keep a watchful eye on. With that said, there's only seven grams of protein per serving, which is a lot less than other brands, so you may not feel as satisfied after eating a cup of this.

After taking a glance at the nutrition label, you'll see ingredients like caramel color, guar gum, cocoa butter, etc. These aren't ingredients you'd find in your typical container of Greek yogurt and they certainly aren't the highest quality.

"Yogurts with fun mix-ins like Cookies & Cream Chobani Flip are usually much higher in added sugar," says Woods. "They're delicious as a snack every now and then, but not something I would eat daily."

This orange cream Greek yogurt contains nearly a third of the recommended daily value of added sugar per serving which to mention is a single cup. Additionally, you'll see different gums on the ingredients list like xanthan gum and locust bean gum which you'll want to try to avoid to prevent unwanted digestive issues.

Vanilla Greek yogurt is a solid choice when looking for a flavored version that goes down easier than the traditional tarte flavor. With that said, this nonfat yogurt has 13 grams of added sugar per serving which is nearly double the amount of natural sugar present.

It also contains a bioengineered food ingredient according to the label so when talking about high quality ingredients this lands at the bottom of the list.

If you're looking for flavorful Greek yogurt, then this strawberry one might pique your interest. With that in mind, it does contain 15% of the daily recommended value of added sugar which can be detrimental to health over time.6254a4d1642c605c54bf1cab17d50f1e

On the ingredients list, you'll notice that this Greek yogurt contains erythritol and sunflower oil. Erythritol is a sugar substitute that can cause bloating, gas, nausea, and headaches as Woods mentioned above. Additionally, sunflower oil has been shown to lead to weight gain and increased inflammation in the body.