40 Restaurant Meals You Should Never Eat After 40

Don't even consider these belly-busting dishes after you've hit the big 4-0.

Finally hitting 40 comes with a lot of perks. You've mastered the arts of confidence and resilience, and you're at your peak career- and family-wise. But what about health-wise? Sure, you can't bounce back after a holiday binge or outrun the younger kids in your family like you did a decade ago, but staying slim and fit isn't as hard as you may think.

Given, as you age, you're more susceptible to certain ailments like heart disease, diabetes, and muscle loss, so we've curated a list of 40 foods you should absolutely steer clear of after 40. If you wish to prevent feeling older, ditch these sabotaging restaurant meals. And instead, try out any of these 21 Best Healthy Cooking Hacks of All Time.

Because They're… Bad for Your Heart

Heartbreakingly enough, the leading cause of death in America is heart disease. But making over your diet is actually a simple way to bypass a failing ticker. Make sure to start by avoiding the absurd amount of artery-clogging fats and blood-pressure-raising salt in the dishes below and opt for making these 22 Diet Changes For a Stronger Heart After 40 instead.

TGI Fridays' Signature Whiskey-Glazed Burger is infused with Jack Daniels and not only has more than 3,500 milligrams of blood-pressure-raising sodium, but those 72 grams of sugar are just alarming, too. A salt and sugar bomb? No thanks.

You would consume two full days worth of sodium if you scarfed down this pasta dish from The Cheesecake factory. The American Heart Association recommends that "cutting back just 1,000 milligrams of sodium a day can significantly improve blood pressure and heart health." You can start by cutting this order out of your life and replacing it with one of our favorite low-sodium fast food orders.

This might be a newer addition to the Outback menu, but that doesn't mean you have to try it. Without fries or any other side side this, this meal is coming in with more than 100 grams of fat and 4,530 milligrams of sodium. It also contains trans fat, a fat that has been connected to coronary heart disease and preventing heart attacks when consumed regularly. 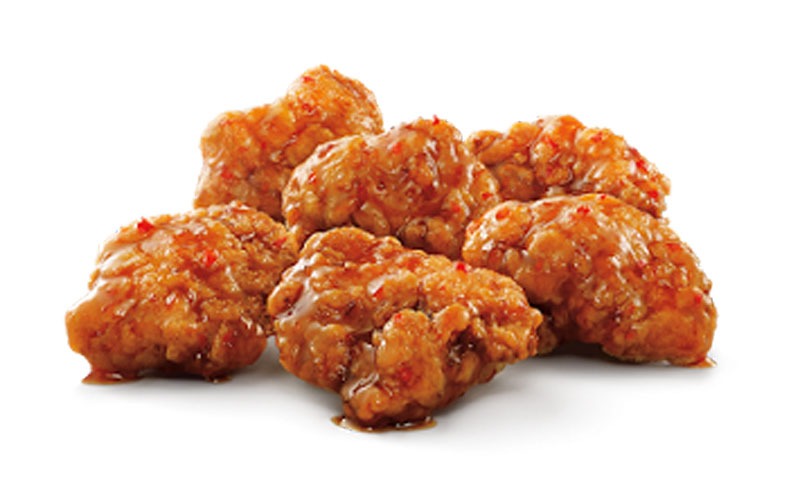 Succulent boneless wings sound like a good idea at happy hour, but not when they're tainted with the salt equivalent of over 23 bags of Lay's Originals.

Unless you're planning to feast on Italian fare with a gallon of water beside you, don't order this monstrosity. After ingesting 3,250 milligrams of sodium, you're definitely going to be thankful for our report on 20 Ways To Beat The Bloat.

Quiznos combines a slew of cured meats like pepperoni, salami, capicola, and ham with mozzarella, black olives, lettuce, tomatoes, onions, and red wine vinaigrette to create a sub that's bound to leave you parched and regretful.

When you're ordering an individual pie, you may think you're doing a favor for your waistline by sticking to the suggested portion. But definitely not in this case. Uno's Chicago Classic Deep Dish Chicago Meat Market Pizza's sodium count should come with a warning label. No wonder why we ranked this the worst restaurant pizza on the planet.

No one needs a burger that's stacked with seven whole patties, let alone a jaw-dropping 3 grams of trans fat and 4,060 milligrams of sodium.

We usually recommend pregaming your dinner with a filling bowl of soup to cut back on calories, but with P.F. Chang's broth, you'll be consuming the salt equivalent of 44 bags of Doritos Cool Ranch tortilla chips! Avoid this like the plague.

If you wouldn't crunch your way through nearly two whole bags of Lay's party-sized potato chips in one sitting, you shouldn't lick your fingers clean of these boneless wings, which are equally as sodium-ridden.

This pasta sounds like an ideal meal. "Whole grain" pasta, shrimp, all healthy, right? Don't let it fool you. One look at the sodium count should warn you to steer very clear.

Yikes. With almost 10 days' worth of saturated fat and 16 grams of trans fat (scary stuff!), this fish fry should be nowhere near over 40-year-olds. Trans fat has been banned from the food supply due to its link with heart disease, so it also doesn't belong in your restaurant food.

They may be a Chinese food staple, but P.F. Chang's egg rolls are going to be a blood pressure-raising disaster.

You're going to want to think twice before sticking your fork into this entrée. Not only does this pasta dish from Cheesecake Factory easily break your daily calorie budget, but the amount of sodium is truly shocking. It even has more sodium than 33 bags of Lays potato chips!

Besides boasting nearly 1,500 calories, this deep-fried fish and fry platter is swimming in salt! Big yikes.

With more than a day's worth of fat, saturated fat, and over two full days' worth of sodium, this Bob Evans breakfast plate is just bad news for your arteries.

Shrimp has the potential to be one of the healthiest lean proteins you can eat. It's lower in calories, but the whopping 4,370 milligrams of sodium doesn't justify the calorie savings.

With those nutritionals, there's no way Papa Murphy's is getting our blessing for this cheeseburger-lover's nightmare. A whole pie of this monstrosity pitiful pie packs in more salt than 10 slices of bacon and more carbs than eight slices of white bread!

To start off, the chicken in this dish is fried and covered in sauce and cheese. So that means it's automatically going to be higher in calories and fat. This version over a bed of pasta is tainted with trans fats, a ton of carbs, and an unbelievable amount of sodium, too.

Even when this generous appetizer sampler is shared, it has a hard time not breaking anyone's calorie, fat, and sodium bank. Skip the "monster" mozzarella sticks, onion rings, and chicken strips. Please!

Outback is known for its iconic Bloomin' Onion. But it's easy to see the calories, sodium, and carb counts are simply excessive here. And all that trans fat? Just scary, especially knowing it has been linked to heart disease as a result of increasing your blood's LDL (bad cholesterol) and reducing the HDL (good cholesterol).

Want to zap your hard-earned abs away? Just order this massive plate of roasted lobster tail, shrimp, sea scallops, and mussels drenched in an oily garlic and white wine sauce next time you hit up Red Lobster.

The fat content is simply high here and while may be tasty, you're better off skipping this dish.

This dish is simply salty, sugary, and fat-laden. You'd be better off having two McDonald's Big Macs than this monstrosity…

This mac and cheese is topped with breaded fried chicken tenders and shredded Parmesan cheese, and the result is a dish that's high in calories and enough sodium to spike your blood pressure.

Because They're… Bad for Your Blood Sugar

According to the UF Diabetes Institute, Type 2 diabetes—the most common type—generally affects people over 40. "It's important that we're eating consistently for blood-sugar balancing which is really the key [to staying fit in your forties]. The fat that tends to collect around the midsection is all about blood sugar and cortisol levels," says Isabel Smith, MS, RD, CDN, registered dietitian and founder of Isabel Smith Nutrition. Start stabilizing your system by steering clear of these nauseatingly sweet offerings.

Ordering up a grilled chicken salad seems like a wise decision when it comes to your waistline, but not at Applebee's. This Asian-inspired bowl packs in a whopping 65 grams of sugar, which means you're better off chomping on the Classic Burger.

The scary part about this pancake dish from IHOP? It's loaded up with way too much sodium and sugar. Two very solid reasons to never order this dish.

The 32 grams of sugar hidden in these boneless bad boys surely doesn't justify the "touch of honey" Sonic claims to add to its wing sauce.

No one ever thought chicken and waffles was all that healthy, but would you have guessed your order came with more added sugars than you should consume in two whole days? This meal is simply high in everything, as the sodium and fat are sky-high, too.

Calling this "dessert for breakfast" wouldn't even cut it, as this French toast dish is drowning in sugar.

When ordering a chicken dish, you probably expect it to be packed with protein rather than sugar. Unfortunately, this dish is the complete opposite, with nearly as much sugar as there is protein.

If you're in the mood for a burger, you're most likely craving something savory, right? And you might not expect to indulge in a burger that is topped with a brown sugar glaze, candied bacon, BBQ sauce, and caramelized onions—along with cheese, lettuce, mayo, on a brioche bun. It's easy to see where all the sugar is coming from here…

If you're conscious of your weight and overall health, ordering a bagel isn't a wise choice—especially if it's Panera's Cinnamon Crunch bagel. Biting into this donut-like treat will cost you 32 grams of sugar, which is just not worth it.

Served with homemade whipped cream, this Butter Cake is simply hard to pass up. But just one order is more than 1,000 calories, has 73 grams of fat, and the same amount of sugar as six glazed donuts. Just skip this!

Peanut butter is one of our favorite weight loss foods, but when it mingles with Oreo in Sonic's large milkshake, it becomes an absolute diet disaster. With more than 1,000 milligrams of sodium and 111 grams of sugar, and you have every right to be truly terrified.

Ordering a chicken bowl usually means you can bypass the extra carbs found in bread or a tortilla. In this case, the absurd amount of sugar should warn you to stay away if you'd like to stay slim.

Top buttermilk pancakes with cinnamon crumb topping,  whipped cream, and a pitcher of warm cream cheese icing for drizzling and you have one of the highest-sugar dishes you can order.

Because They… Don't Encourage Muscle Maintenance

If you're regularly exercising, you're already a step ahead in maintaining hard-earned muscles. But you may be sabotaging those abs if you're not refueling with enough protein. "It's important to make sure we have 20 to 30 grams of protein at every meal. That's ideal to help keep that muscle mass strong," says Jessica Crandall, a Denver-based RD, Certified Diabetes Educator, and National Spokesperson for the Academy of Nutrition and Dietetics. These meals definitely don't fit the bill.

With 53 grams of sugar, this fluffy breakfast waffle should at least offer some muscle-building protein to keep you full. Skip this carb-laden a.m. meal and choose some of these best breakfast foods for weight loss instead.

One cookie shouldn't cost you 800 calories, 43 grams of fat, one gram of trans fat, and a jaw-dropping 56 grams of sugar—the equivalent of about 12 Oreos.

Besides this Southern dish being tainted with trans fat, the fiber is simply measly. If you're ingesting nearly 1,000 calories, we'd expect there would be a bit more to keep you satiated.