We preferred the old recipes for the apple pies and French fries, to be honest.

Sure, the Big Mac has stayed on the McDonald's menu for years, and it's hard to imagine chicken McNuggets going away anytime soon. But not everything at the Golden Arches has been a success. There are plenty of failed McDonald's menu items that didn't make it, whether because fans weren't buying them or because their production effort was unsustainable for the fast-food chain.

We're taking a trip down memory lane with these 15 discontinued McDonald's items. How many have you tried? And for more, don't miss 15 Secrets McDonald's Employees Don't Want You to Know.

If you were feeling fancy in the '90s, you could order an Arch Deluxe instead of a Big Mac. But there wasn't much to differentiate the "deluxe" burger from its cheaper counterpart, so it was removed from the menu.

Don't miss What a McDonald's Big Mac Cost the Year You Were Born.

Apple pie is still on the menu at McDonald's, but the recipe changed in 2018, and it's never been the same.

Just be sure to stay away from these 10 Worst Menu Items at McDonald's.

Once upon a time, McDonald's made its fries with beef tallow. These days, the fries are vegetarian-friendly and are prepared in vegetable oil. But there was something delicious about the beef tallow spuds.

McDonald's botched its rollout of this dipping sauce with a racially insensitive ad campaign. But the dip is still beloved by many fast-food fans, especially those who watched Rick & Morty. It returned briefly recently for a limited time and, as predicted, fans went wild for it.

Thanks to the coronavirus pandemic, McDonald's has simplified its menu, and that included getting rid of its salads. It's not clear if and when they'll return to the Golden Arches.

If you prefer grilled chicken to crispy chicken at McDonald's, we have some bad news. The Artisan Grilled Chicken Sandwich is another pandemic casualty on the McDonald's menu, though the McChicken is still available.

Check out The Best and Worst Fast-Food Chicken Sandwiches, According to a Dietitian. 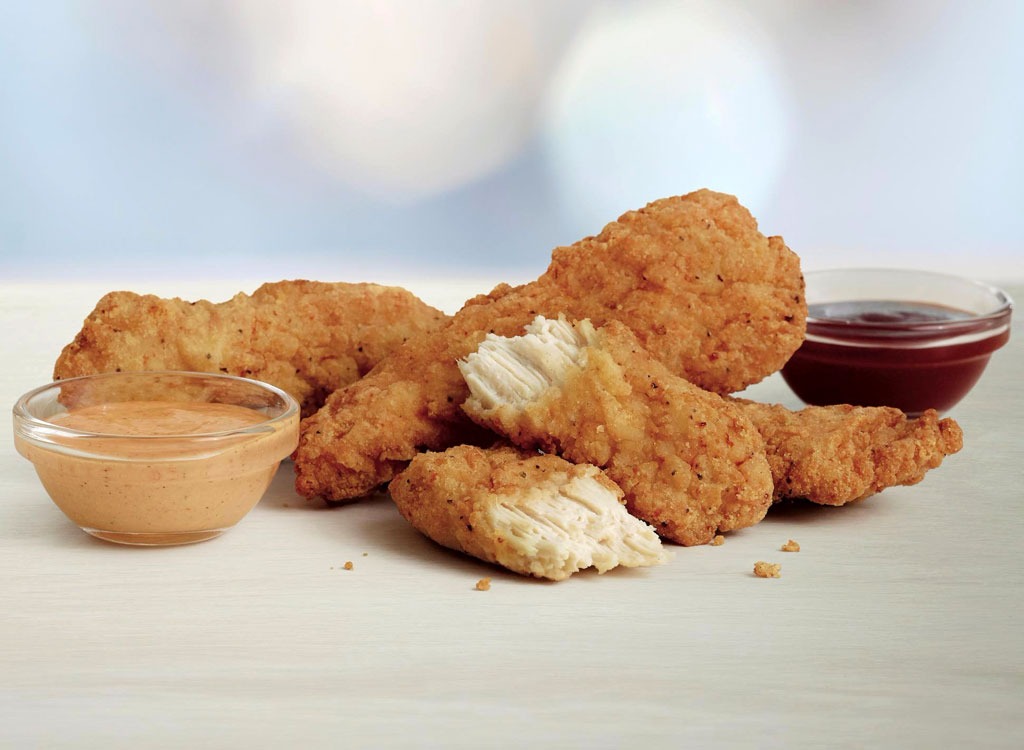 Yes, McNuggets are still on the menu, but there was something that felt a little more grown-up about ordering chicken tenders instead.

All-day breakfast was another coronavirus casualty at McDonald's. Fortunately, you can still order a Golden Arches breakfast the old-fashioned way: Before 10:30 am. Some locations have limited items all day.

If you didn't like the traditional breakfast sandwich offerings like the egg McMuffin, you used to be able to get your sandwich on a bagel instead. Sadly, that's a thing of the past—you'll now have to head to a bagel shop to get your beloved bagel sandwich.6254a4d1642c605c54bf1cab17d50f1e

And for more nostalgia, don't miss these 15 Fast-Food Menu Items You Might Never See Again.

The only two items currently on the McDonald's "fries and sides" menu are fries and apple slices. The fruit and yogurt parfait, which layered strawberries and blueberries with vanilla yogurt, disappeared during the pandemic.

McDonald's doesn't serve onion rings, but once upon a time, the Golden Arches served Onion Nuggets. They were a bit like the Texas Tonion from LongHorn Steakhouse, with fried onion chunks that were perfect for dipping.

The Big N' Tasty was added to the McDonald's menu in the late '90s. But like the Arch Deluxe, the burger didn't have enough to differentiate it from the chain's other burger offerings like the Big Mac.

Cheese and pineapple slices don't usually go together, and pineapple isn't usually served in place of burger meat. But this inventive vegetarian creation was so out-of-the-box that we'd love to see it on McDonald's menus again.

This wasn't a salad, per se—it was apple slices with yogurt and candied walnuts. But it was a major upgrade from the plain apple slices, so it's a shame it didn't last.

This Lent favorite is beloved if only for the catchy jingle from the ads that went with it. Fishy, fishy!

RELATED: The Worst McDonald's Menu Items You Should Never Order