10 Beloved Taco Bell Items That Have Disappeared From the Menu

The beloved Mexican Pizza is a thing of the past, but so are several other fan favorites.

Although we're more than halfway through 2021, we're still thinking about all of the menu changes that Taco Bell made in 2020. The fast-food chain took us on a roller coaster ride of emotions sparked by new additions and heartbreaking cuts last year.

If you can't exactly remember what is and isn't on the Taco Bell menu any longer, we won't blame you. To refresh your memory, we gathered some of the tacos, burritos, and other menu items you can't order now. And for another trip down memory lane, check out these 15 Classic American Desserts That Deserve a Comeback.

This iconic item left the menu for good on Nov. 5, 2020—but not before a flood of fan efforts to stop it. At the time, a Change.org petition dedicated to keeping the Mexican Pizza gained 80,000 signatures. It now has more than 150,000.

In a previous statement, Taco Bell said "one silver lining of saying goodbye to the Mexican Pizza that might help you rest easy is that removing it from our menus helps us work towards our commitment to leave a lighter footprint on our planet." In total, the packaging for this retired menu item accounted for more than 7 million pounds of paperboard material each year.

If you really miss this menu item, the Bell's rival, Del Taco, launched the Crunchtada, the chain's version of a crunchy tostada, similar to the beloved Mexican Pizza.

Related: The Healthiest Foods on Taco Bell's New Menu, According to a Dietitian

When it announced the departure of the Mexican Pizza, Taco Bell also revealed to fans that Pico De Gallo would be getting the boot in favor of fresh diced tomatoes.

If a "Fresco Style" burrito or taco was your go-to order, don't worry. "Guests can still order Fresco Style, which will soon mean swapping out nacho cheese sauce, shredded cheese, mayo-based sauces, and low-fat sour cream with tomatoes," the company said in a statement.

For more on how to eat healthier while eating out, here are the The Worst Fast Foods for Your Health, According to RDs.

Related: The Healthiest Fast-Food Chicken Nuggets, According to Dietitians 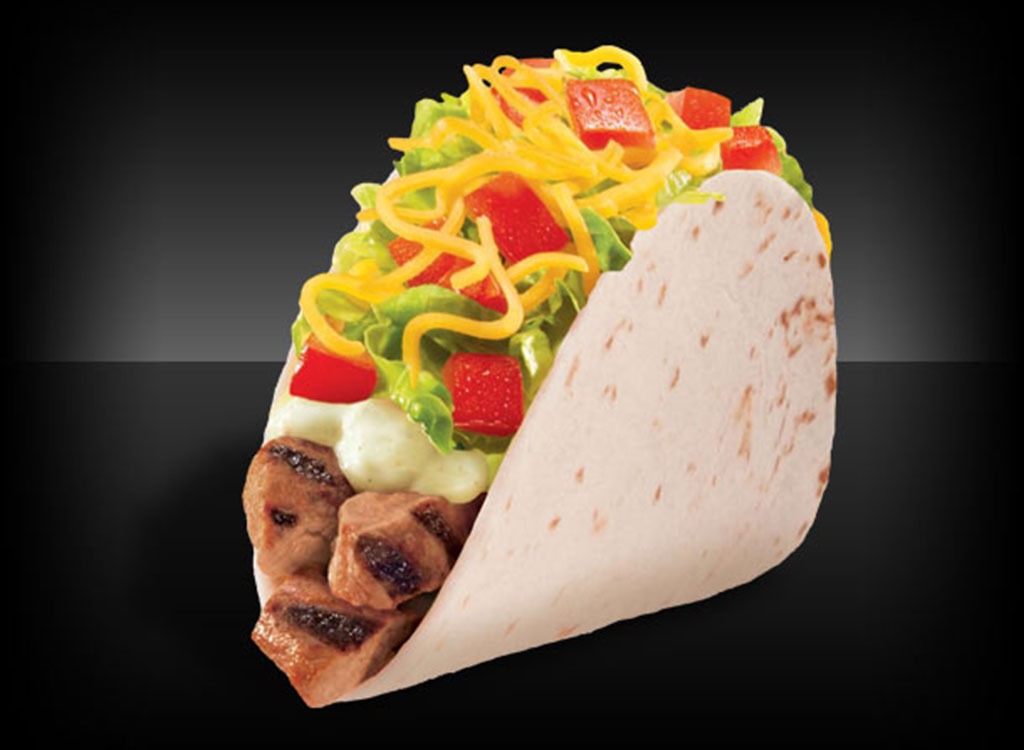 This soft taco was removed in July 2020. The decision came about in order to make room for other items, as well as to streamline operations amid the ongoing COVID-19 pandemic, the company said. However, if steak is your protein of choice, you still have three other options: the Steak Quesadilla, the Grande Toasted Steak Breakfast Burrito, and the Hash Brown Toasted Steak Breakfast Burrito.

But all isn't lost! You can always make your own at home with our 17 Best Healthy Steak Recipes.

Though it's gone, Taco Bell's menu is "easy to customize," the company reminded customers in a September statement. "We encourage guests to play around on our mobile app or on our website—you never know what fan favorites you can recreate!"

The cut was initially announced in July, but Taco Bell wasn't the only chain dropping menu items at the time. Here are All the Menu Items Fast-Food Chains Stopped Selling in 2020.

This combo of beans, beef, cheese, and tomatoes on chips remained on the menu for a few more weeks in July after Taco Bell announced its departure with quite a few other menu items. Luckily, a previous fan-favorite nacho item came back just in time for 2021—Nacho Fries!

"In a year as difficult and uncertain as this one was, we know that consumers crave the comforts they love most," Nikki Lawson, Taco Bell's chief global brand officer, previously said in a statement given to Eat This, Not That!. "That's why we're excited to bring back Nacho Fries for our passionate fans to close out this year and kick-off 2021 positively and deliciously."

Another menu item you won't be able to order as a result of the pandemic is the Beefy Fritos Burrito. "And while change is hard, a simplified menu and innovation process will leave room for new fan favorites, continued progress in categories such as plant-based diets, and even opportunities for the return of some classics on a limited-time basis," Taco Bell said.

This lighter menu option was part of the big discontinuation in July. And while there's no remaining tostada on the menu, this Mexican favorite is actually pretty easy to make at home. Here's our recipe for Healthy Nacho Cauliflower Tostadas.

The Cheesy Potato and Beefy Nacho Loaded Grillers left the menu together over the summer in 2020, but hope is still alive because Taco bell goodbyes are never permanent. Remember, there are "opportunities for the return of some classics on a limited-time basis." Just think about the great comeback story of the Spicy Potato Soft Taco!6254a4d1642c605c54bf1cab17d50f1e

If Taco Bell is your preferred fast-food breakfast stop, there are still other egg combos to choose from. But do keep in mind the 8 Foods You Should Never Eat At Breakfast.

For more Taco Bell news delivered right to your email inbox every day, sign up for our newsletter!