The Unhealthiest Canned Foods on the Planet

You knew canned foods were bad, but you didn't know they were this bad.

I'll be honest. I try to avoid canned goods at all costs. Between scouring labels to ensure metal tins are free of hormone-disrupting BPA, ensuring nutrition labels aren't touting absurdly high sodium contents, and skimming through ingredient lists for nasty additives and preservatives, it seems like buying healthy canned foods is more of a burden than a convenience.

While the canned goods landscape is increasingly becoming more diverse and adding more diet-friendly products than ever before, some of the worst diet saboteurs still line the canned goods section. Check your pantry to see if some of these waistline-wrecking picks are taking up precious shelf space and replace them with our Eat This!-approved alternative. And if you'd like to continue making more healthy swaps, don't miss these 20 Food Swaps that Double Weight Loss. 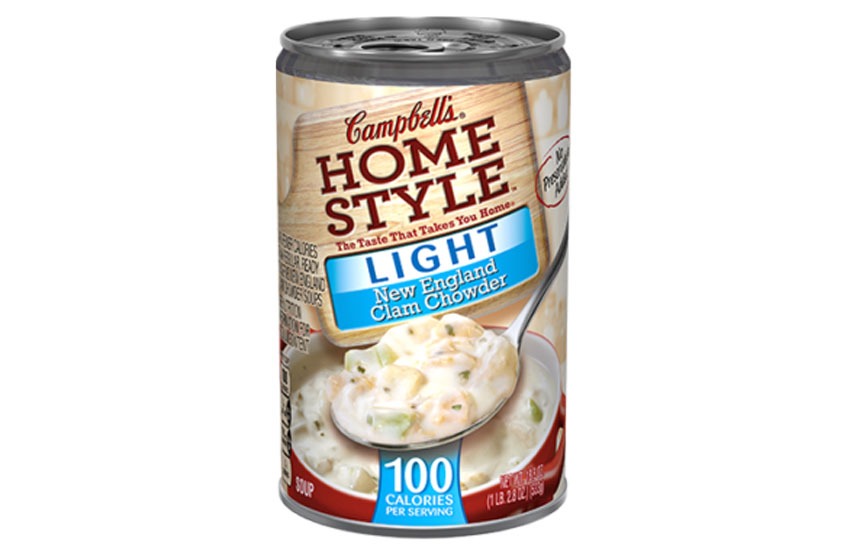 Don't be fooled into thinking this soup is good for you just because it plasters the words "Light" and "100 Calories Per Serving" on the label. Lurking beneath the aura of natural foods is one nasty additive: titanium dioxide. A recent review found this whitening agent has numerous negative health implications in humans, including hindering the functioning of digestive cells and reducing absorption of nutrients such as iron and zinc. Because it has no nutritional value as an additive other than keeping artificial foods white, there's no reason TD should be in your soup.

Instead, we recommend going with a condensed version from Bar Harbor so you can control how much cream and butter you'd like to add and you'll avoid more preservatives that are among the 23 Worst Food Additives in America. 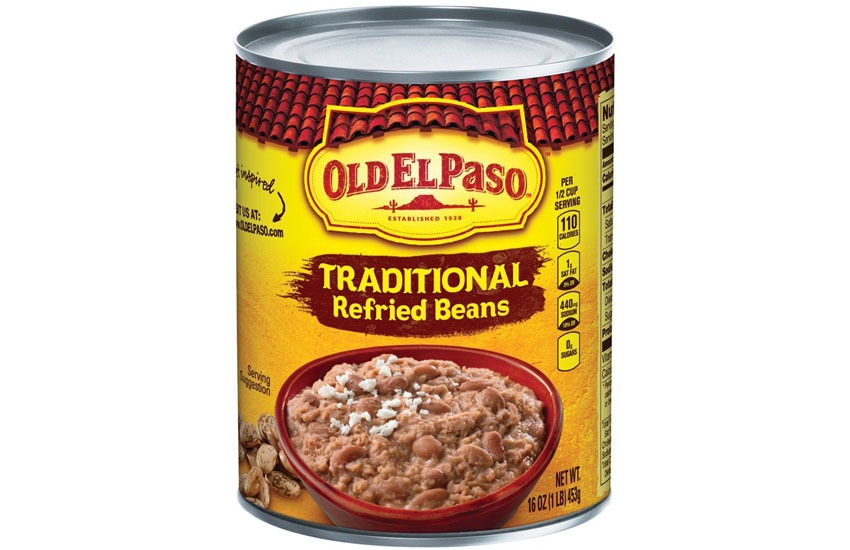 Beans, beans, they're good for your heart! Well, until you add hydrogenated lard to them. High in saturated fats and potentially contaminated with artery-clogging trans fats, these refried beans from Old El Paso should stay off your grocery list. Replace them with the vegetarian version from Amy's that is also more heart-friendly because it has 250 fewer milligrams of sodium. 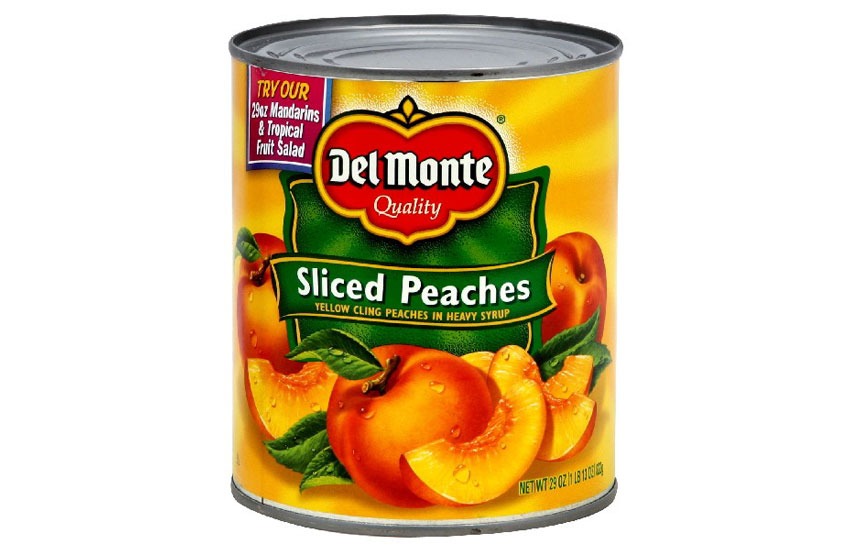 Remember eating these as a kid? We bet you never knew these melt-in-your-mouth peaches were actually soaking in water, high fructose corn syrup, corn syrup, and sugar. By marinating in this sweet solution, just a half a cup of these peaches racks up 21 grams of sugar. (According to the USDA Nutrient Database, the same half a cup of natural peach wedges will only have 7 grams of sugar.) That equates to 28 percent of your recommended daily limit of added sugars. Instead, cut back on the sweet stuff by picking up the "Lite" can, which is simply made with less added sugar. 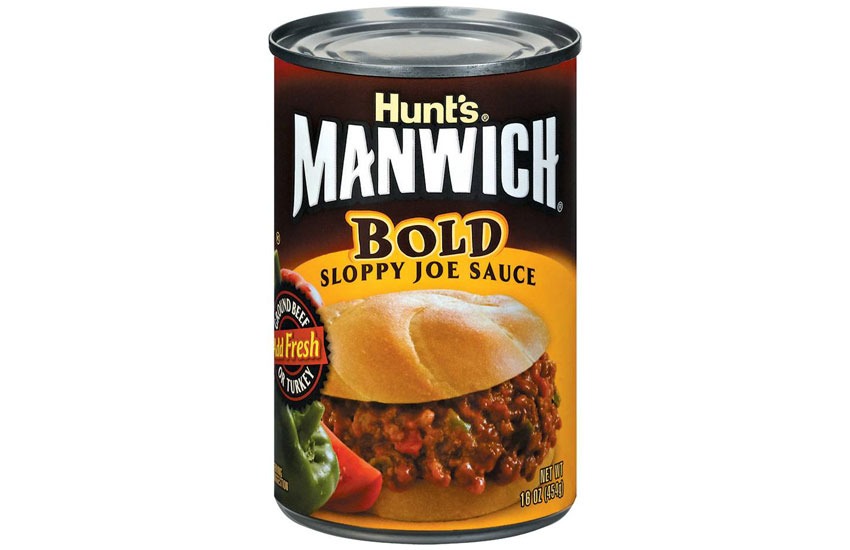 Lunch in under 15 minutes? Call on a Sloppy Joe! Just don't grab a can of Hunt's Bold Sloppy Joe Sauce. Besides tomato puree, this can is mostly high fructose corn syrup and corn syrup. The issue with high fructose corn syrup is that it's high in a specific type of sugar called fructose. Because your liver is the only organ that can metabolize fructose, high intakes of this sugar have been linked to a wide array of health issues, from high blood pressure, belly fat, heart disease, non-alcoholic fatty liver disease, and insulin resistance.

While Hunt's Original Manwich sauce also has high fructose corn syrup, there are 5 fewer grams of it, which, combined with being 180 milligrams lower in sodium and half the calories, makes it our "Eat This!" pick. Speaking of HFCS, have you read about these 23 Surprising Foods That Shouldn't Have Syrup In Them? 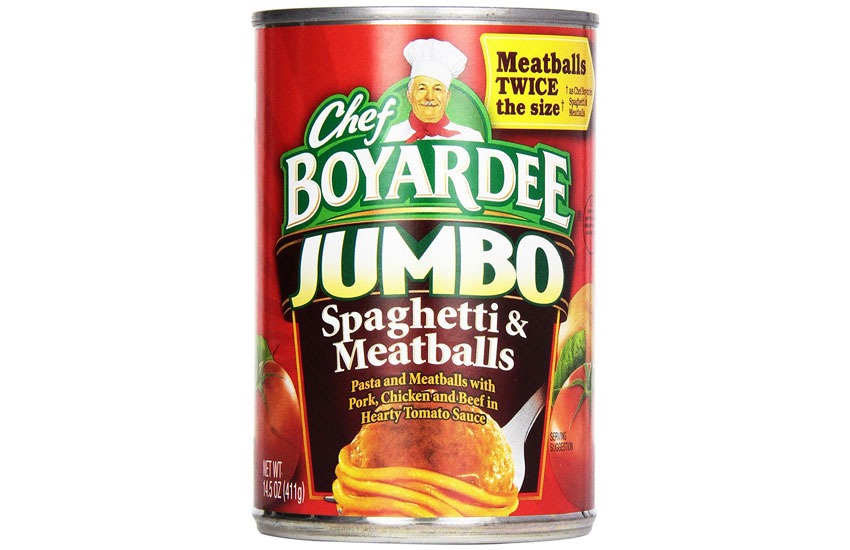 Who knew that spaghetti and meatballs could come with 8 grams of sugar? That's thanks to Chef Boyardee adding high fructose corn syrup to their sauce. That's not the only issue we have with this canned food. It gets a significant amount of protein, not from the actual meat used in the meatballs, but from soy protein concentrate. Unlike a protein isolate, protein concentrate contains more of the nutrients found in soy, which could mean it's more likely to contain traces of the carcinogen-containing pesticides used in genetically-modified soy production. To make matters worse, the meatballs are dyed with caramel color and most of their 13 grams of fat comes from soybean oil. 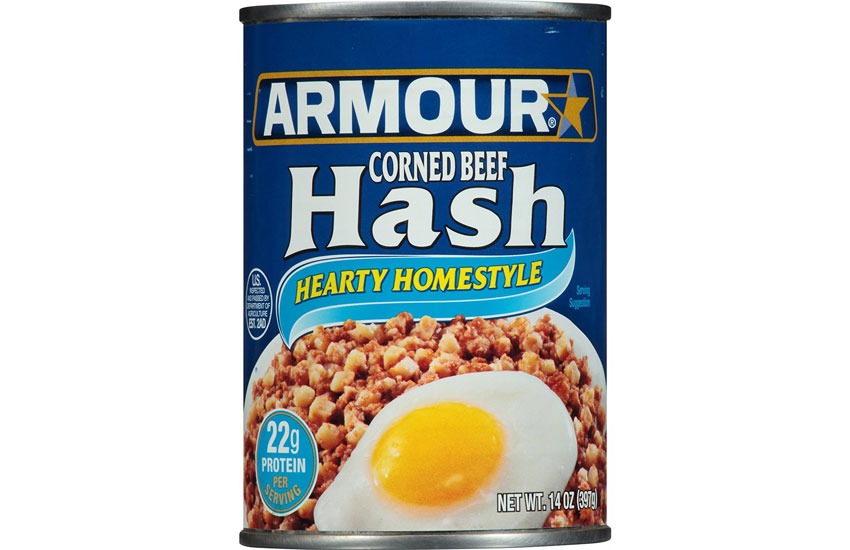 There aren't any nasty additives found in Armour's Hearty Homestyle Corned Beef Hash; but, we're concerned about the 40 percent of your daily value of fat, 50 percent of your DV of saturated fat, and presence of trans fat in just a cup serving. Although the trans fat isn't from artificial sources, studies show natural trans fats may also have a negative effect on cholesterol levels. Plus, the fact that a serving climbs to nearly 1,000 milligrams of sodium makes our blood boil. 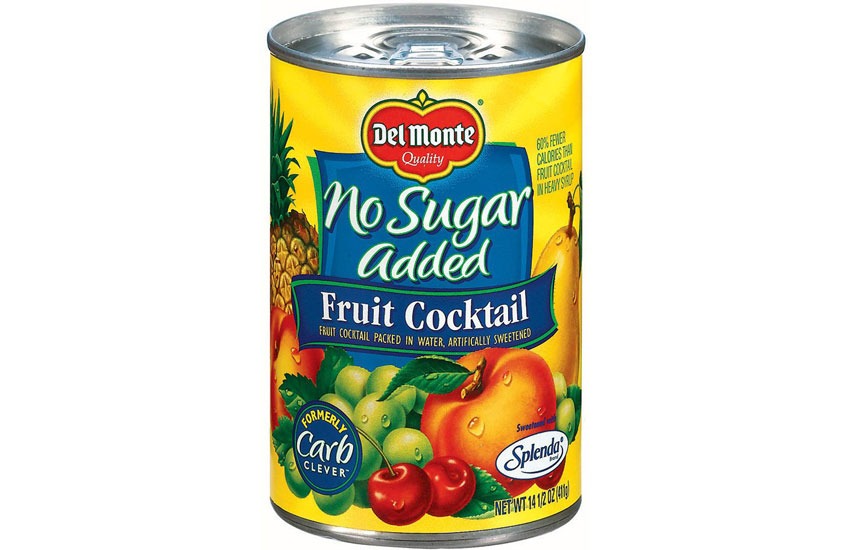 Here's a tip: "no sugar added" is usually code for "we still sweeten this product, but we just use artificial sweeteners instead of cane sugar." And that's precisely the case with this can of fruit cocktail from Del Monte. It's sweetened with two artificial sweeteners—Acesulfame Potassium and Sucralose—which researchers have found to have negative health implications that range from causing an imbalance in your gut microbiome to recalibrating your sweetness receptors (which can cause you to overeat traditionally-sweetened foods). If you're looking to cut back on the sweet stuff (which is 21 grams in the regular can), we recommend going with Del Monte's "Lite" version listed below. 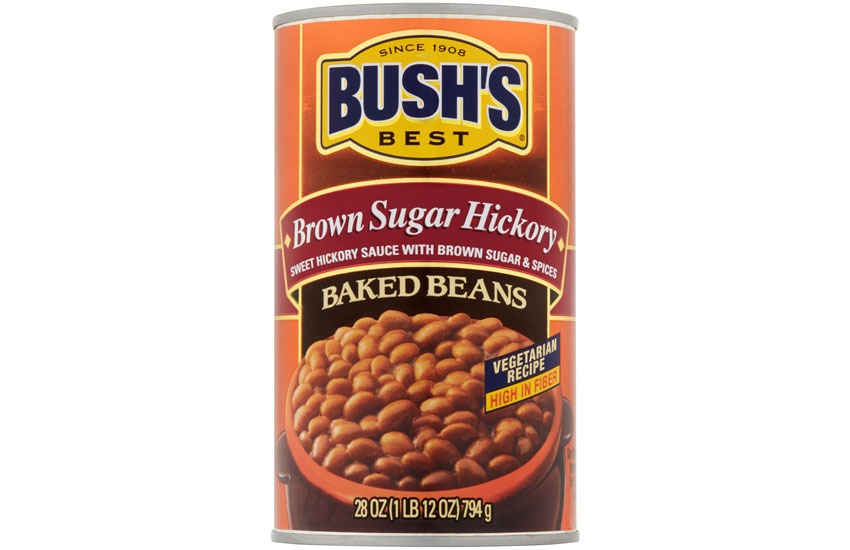 This serving of beans has nearly as much sugar as 4 Oreo cookies! To make matters worse, Bush's also artificially colors their beans with caramel color, a food additive that has been known to contain a potential carcinogen called 4-methylimidazole. Although unconfirmed in human studies, you'd be better off avoiding any products with this additive as it has no nutritive benefits. Instead, Amy's makes pleasantly-sweet baked beans for a fraction of the sodium and sugar and with none of the nasty additives. 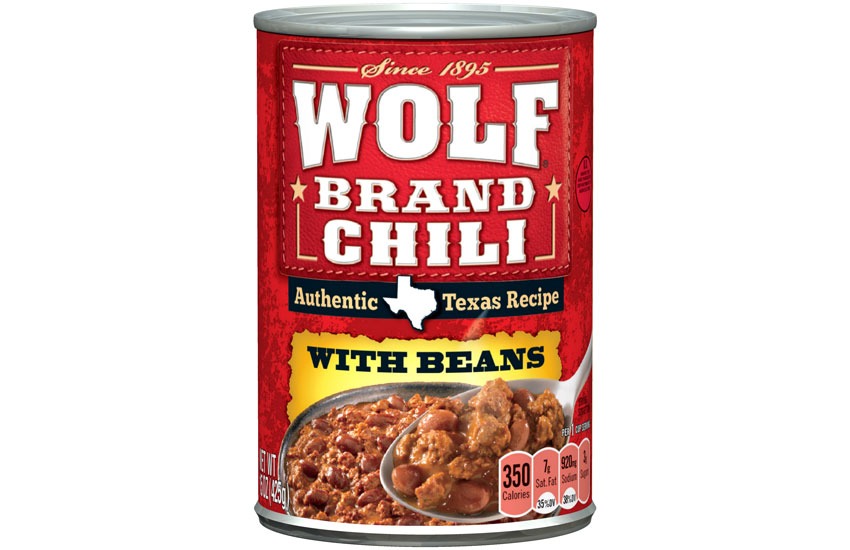 Racking up nearly 1,000 milligrams of sodium per measly 1 cup serving and managing to be one of the few soups on the market with any artery-clogging trans fat, Wolf Brand's chili doesn't deserve a place in your pantry. Cut back on calories, 12 grams of fat and 4 grams of saturated fat by picking up a similar chili offering from Campbell's. 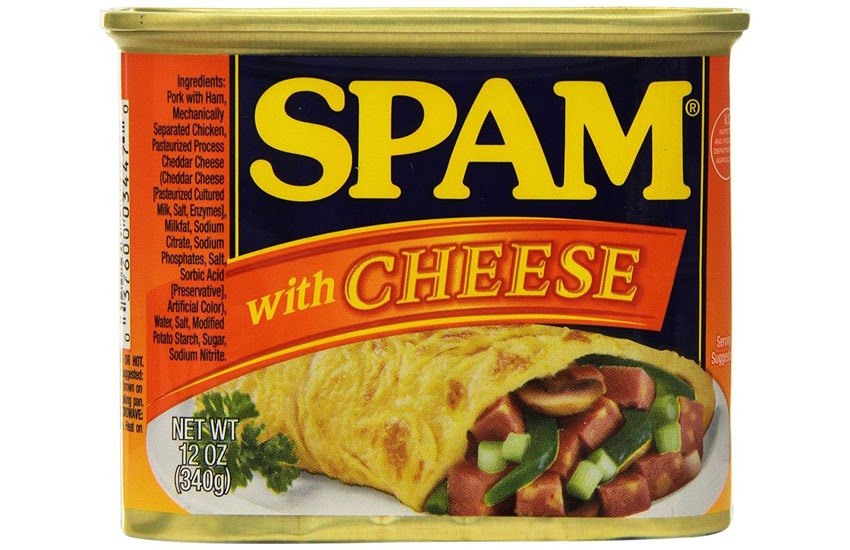 SPAM might be kinds gross, but it's actually made with decent ingredients: pork, salt, water, potato starch, sugar, and sodium nitrite. Sure, it's higher in sodium than we'd like, but it's a decent alternative to SPAM with Cheese. This frankenfood is dyed with artificial colors and is loaded with sodium phosphates. While low levels of phosphates are necessary for health, when you eat them in excess, studies have found it to accelerate aging. Processed meats and fast food are two types of food which contain the highest levels of this ingredient. If you can lay off the SPAM, please do. And replace it with one of these 20 Foods That Turn Back Your Metabolic Clock.

Canned albacore tuna, like the tuna in StarKist Solid White, contains three times the level of mercury as canned light tuna, according to the FDA. Although the mercury level in StarKist white tuna is around 0.35 ppm, according to StarKist's website — which is less than the FDA-recommended 1.0 ppm — the FDA still only recommends you eat albacore, or white tuna, once a week. On top of that, this tuna from StarKist sits in a pool of inflammatory soybean oil. Opt for canned light tuna in water instead. Light tuna is a mix of smaller tuna species, most often skipjack, and is one of the FDA's "Best Choices" for fish, which means you can eat 2-3 servings of canned light tuna a week. Plus tuna in water means fewer calories than tuna in oil. 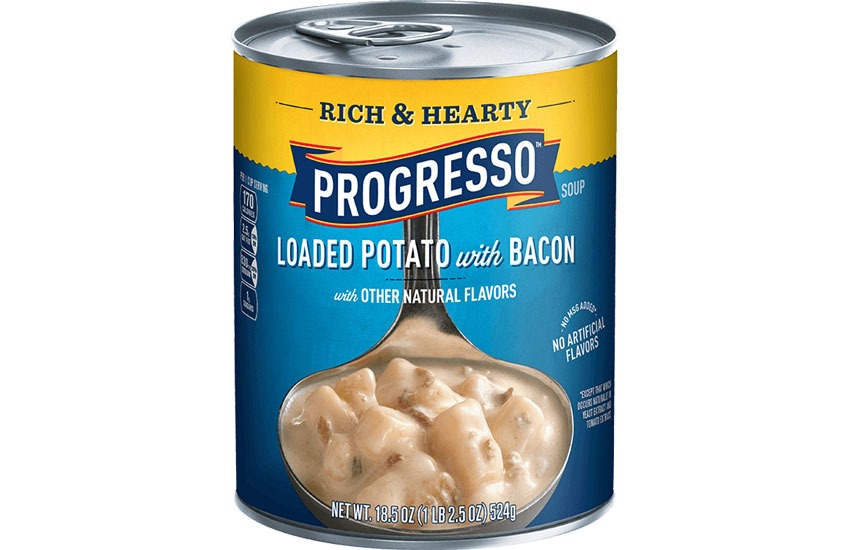 Since there's less than 1% of bacon in this soup, those 10 grams of fat and saturated fat are mostly from inflammatory, omega-6-laden soybean oil. Combine that with a higher-than-standard sodium count, age-accelerating phosphate additives, artificial colors, and artificial flavors, this soup is best left of the shelf. 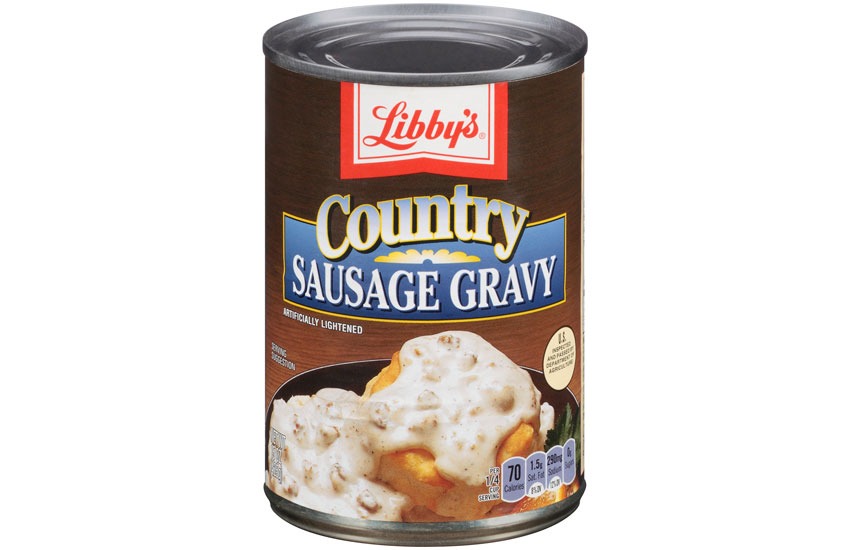 We actually weren't able to find an Eat This!-approved alternative to Libby's Sausage Gravy because no other brand makes a canned sausage gravy. Maybe it's because the product is absurdly unhealthy. It's made from caramel-colored sausage, inflammatory soybean oil, whitening-agent titanium dioxide, artificial flavors, and propyl gallate (PG). PG has been classified as GRAS (generally recognized as safe), but a National Toxicology Program study associated ingestion with tumors in rats. Unfortunately, not much research has been done since that 1982 study, but before we eat anything, we'd like to have ample evidence suggesting an ingredient is safe rather than potentially harmful. 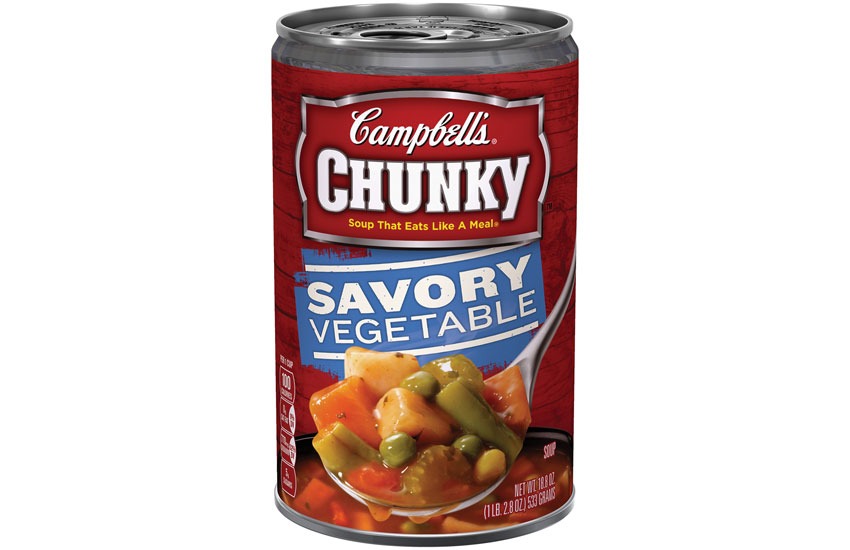 It might sound healthy because it's a vegetable soup, but there are hidden diet saboteurs lurking in the ingredient list of Campbell's Chunky Savory Vegetable Soup: high fructose corn syrup, "flavoring," hydrolyzed soy protein, and caramel color. All of these are missing—along with nearly 100 milligrams of sodium—in Amy's version. 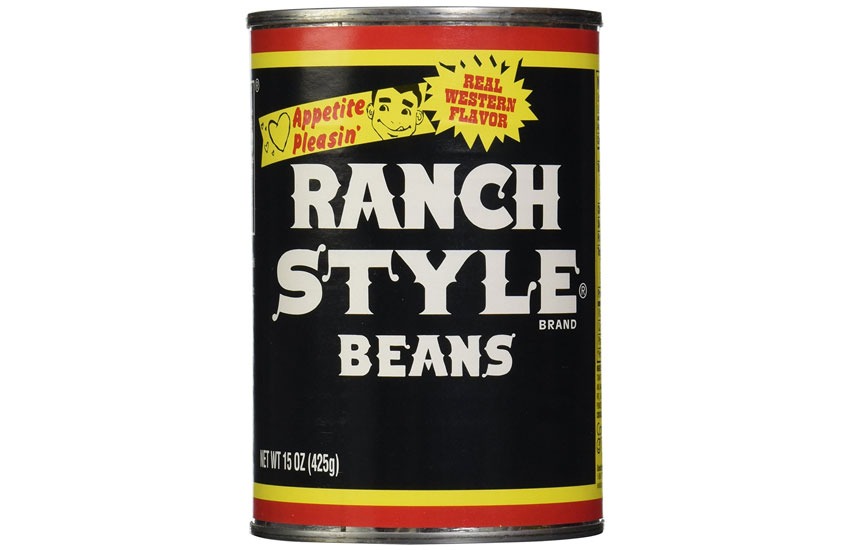 These Ranch Style Beans are still stuck in the dark ages. That's because they're made with partially hydrogenated soybean oil, a man-made trans fat that's been linked to heart disease and has been banned by the FDA from being used in the food supply. 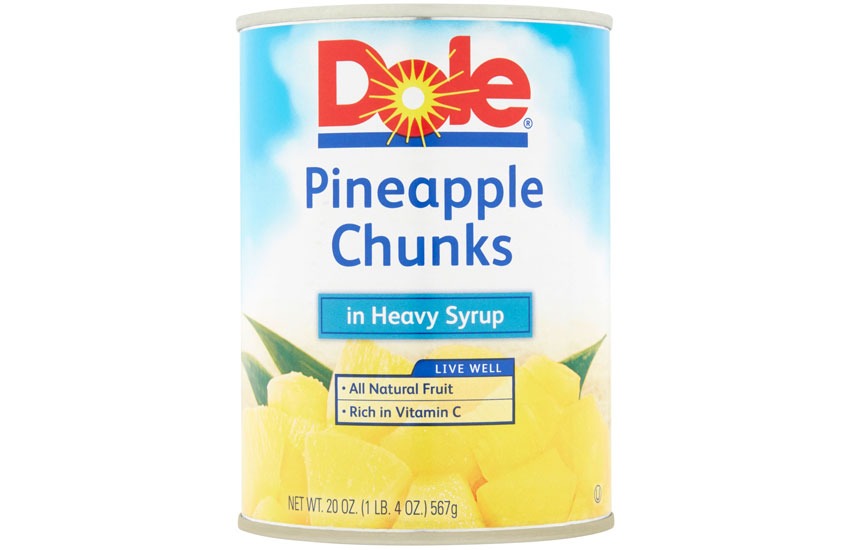 Sure, this can is only made up of pineapple, water, sugar, and citric acid, but our issue here is that there are 10 unnecessary grams of added sugar that don't need to be there.

When we say name a food that's both sweet and salty, would Raviolios come to mind? Just one cup of Campbell's Raviolios will set you back the same amount of belly-bloating sodium as 44 Rold Gold pretzels and 2 Sugar-Raised donuts from Dunkin Donuts. Cut back on each of these belt-busting ingredients with a similar can from Chef Boyardee. 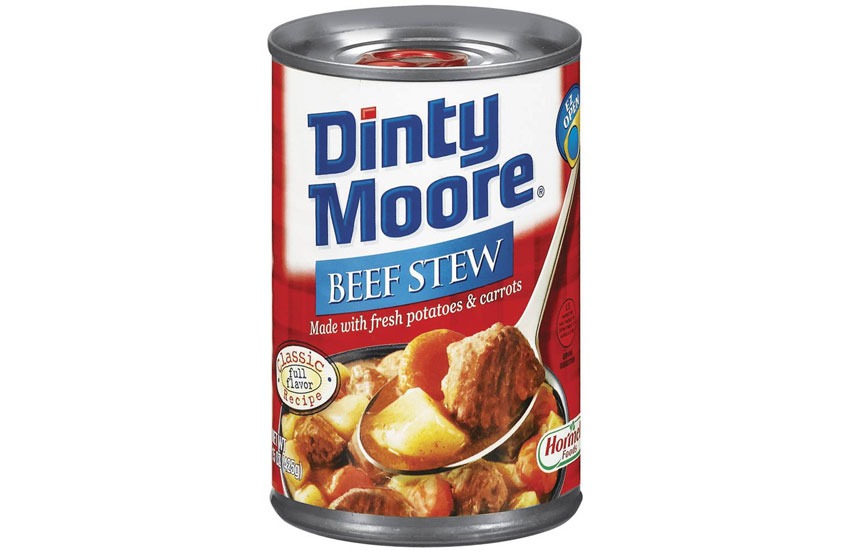 Despite being colored with caramel coloring and flavored with MSG-like additives and artificial flavors, our main beef with Dinty Moore's Beef Stew is that it nears 1,000 miligrams of sodium per dainty 1 cup serving. Cut back on the blood-pressure raising stuff by choosing Healthy Choice's low sodium Vegetable Beef soup. 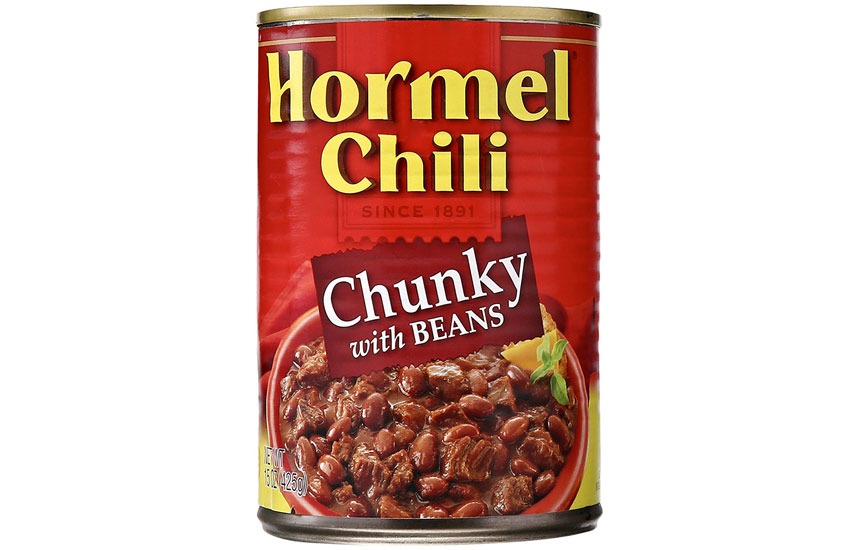 Despite having a relatively clean ingredient list (save for the potentially carcinogen-contaminated caramel color), Hormel's major error with this chili is its absurdly high sodium content. Too much sodium can have negative effects on blood pressure and water retention, which can make you look wider around the middle. Cut back on the belly-bloating stuff by choosing Hormel's lower sodium option. 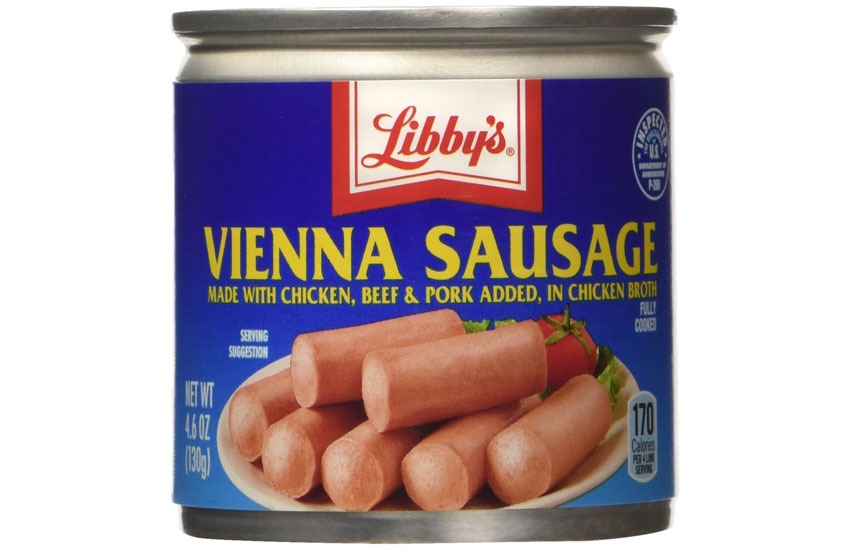 Libby's definitely does a great job of keeping a low sodium count for their Vienna Sausages, but this can boasts a high calorie and fat count among all the products on the market. Another grievance we have with the brand is that Libby's uses sodium erythrorbate—a preservative that may cause allergic reactions, gout-like symptoms, and kidney stones in a small subsection of the population. To steer clear of this sketchy additive and save yourself some fat-laden calories, go with Armour's sausages. (Just be sure to wash the salty pick down with extra water.) If you're looking for waistline-friendly chicken dishes, check out these 35 Healthy Chicken Recipes for Weight Loss.

Olivia Tarantino
Olivia Tarantino is the Managing Editor of Eat This, Not That!, specializing in nutrition, health, and food product coverage. Read more about Olivia
Filed Under
Unhealthy