We Tasted 9 Frozen Waffles & These Are the Best

Sure, you've had Eggos (and probably craved them if you've watched Stranger Things), but the classic brand is far from the only frozen waffle on the market these days. With so many options out there, we set out to find the best frozen waffles, once and for all.

While our editors' palates vary, the top and bottom choices in this test were nearly unanimous. To calculate the list, we took the average score for each frozen waffle box, with 1 being the absolute best and 9 being the worst. Our test included three gluten-free brands, a few high-protein options, and some classic brands, too.

The frozen waffles we taste-tested were:

Now, see which waffles our staff loved the most—and which ones we'd leave in the freezer. And for more, don't miss the Best Waffles in Every State

Even after being toasted, some of the waffles maintained a chewy texture without getting soggy. On the other hand, some of them were picture-perfect, boasting a golden hue before even hitting the toaster. While texture and taste are the main factors in this test, we couldn't help but notice the appearance of a few standout waffles, too.

As far as taste goes, our testers favored waffles that tasted like they could have been used for ice cream waffle cones or ones that were delicious even without syrup. Less high-ranking are the brands that tasted more like toast than waffles and the ones with grainer textures. 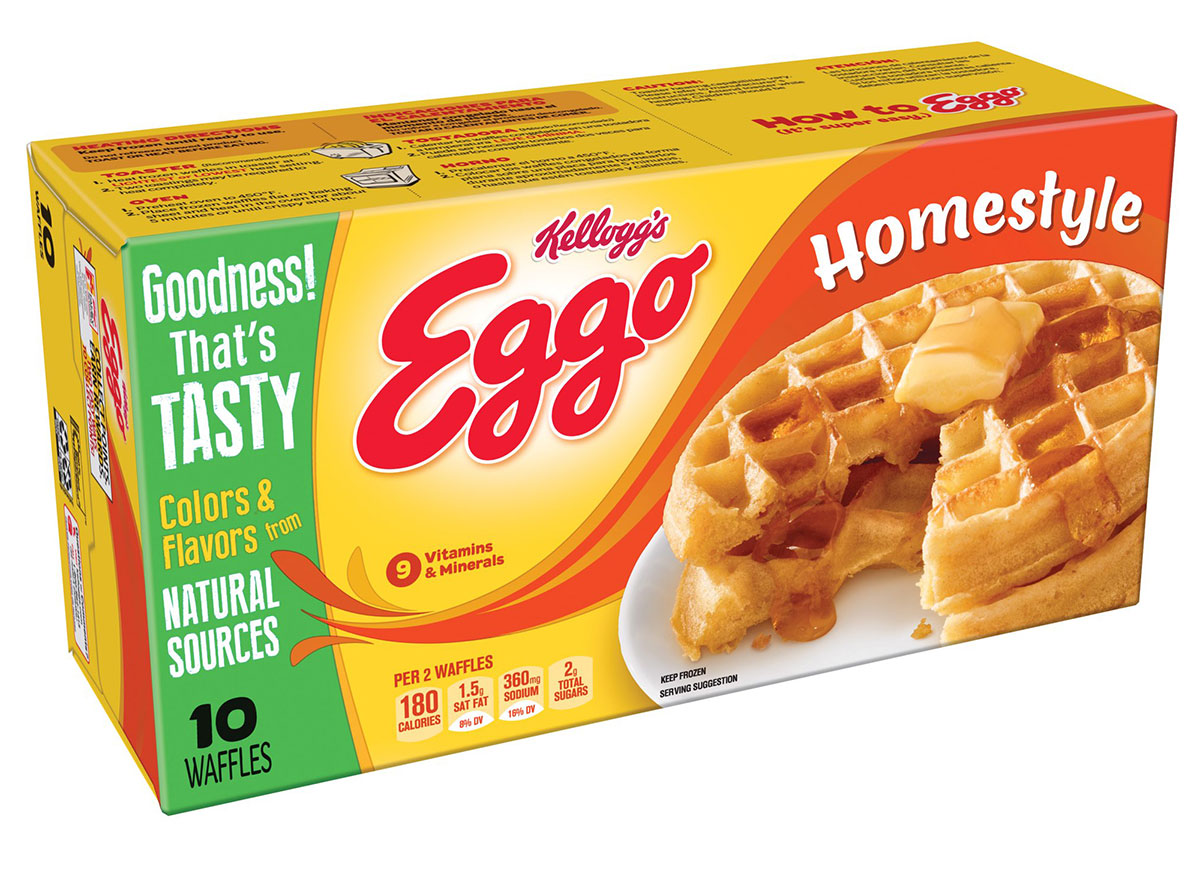 The Eggo waffles didn't maintain a crunchy exterior after toasting. One taster wrote that these waffles were "kind of rubbery," while another wrote that they were "very limp."

"Honestly, I don't see the thrill behind this," one taster wrote of the Eggo waffles. "This has absolutely no flavor. It's soft at least? They look bleached and artificial."

Echoing the flavor criticism, another editor wrote that the Eggo waffles were "fake-tasting." The Eggo box boasts "colors and flavors from natural sources," but our editors didn't get that vibe from the product.

Despite being arguably the most well-recognized toaster waffles on this list, Eggo didn't win our tasters' hearts. These waffles evoked nostalgia—one taster wrote that Eggo waffles "taste like childhood"—but that wasn't enough to earn them a higher spot on this list. We might have grown up eating these, but nowadays, there are better waffles out there.

Off the Grid Vanilla Buttermilk Waffles 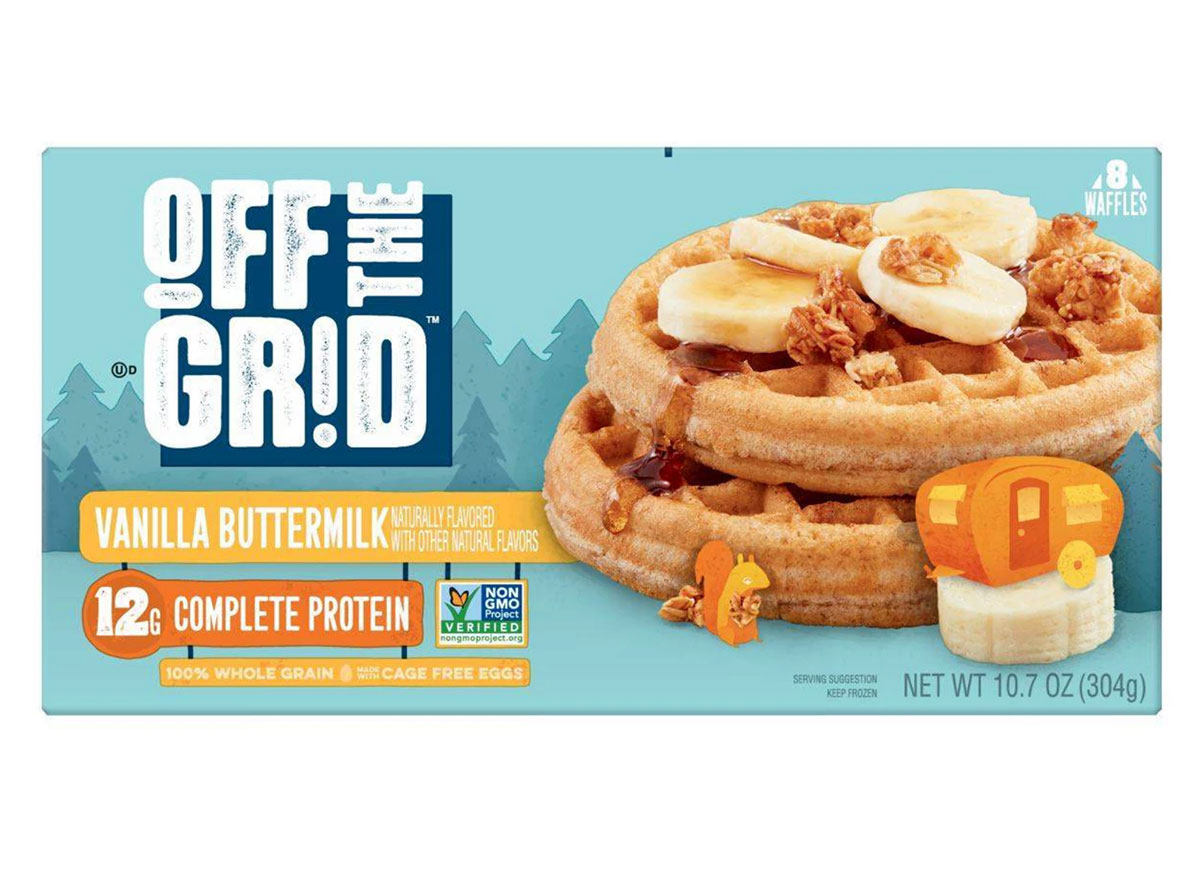 The vanilla taste of these waffles was overwhelming for some of our editors. "Vanilla is overpowering," wrote one editor.

Off the Grid's texture also didn't fare well in this test. "Grainy, not pleasurable," is how one editor described these waffles. "Tastes like mushy bread," another taster wrote.

Still, not every taster was displeased with Off the Wall. One editor wrote that they liked the "strong vanilla flavor," and that she was "surprisingly pleased" by this brand.

This was a divisive brand for some, with the vanilla flavor evoking both positive and negative reactions. We love that this brand includes 12 grams of protein per serving, but if you're not a huge fan of vanilla, you'd be better off with another one of the Off the Grid flavors. 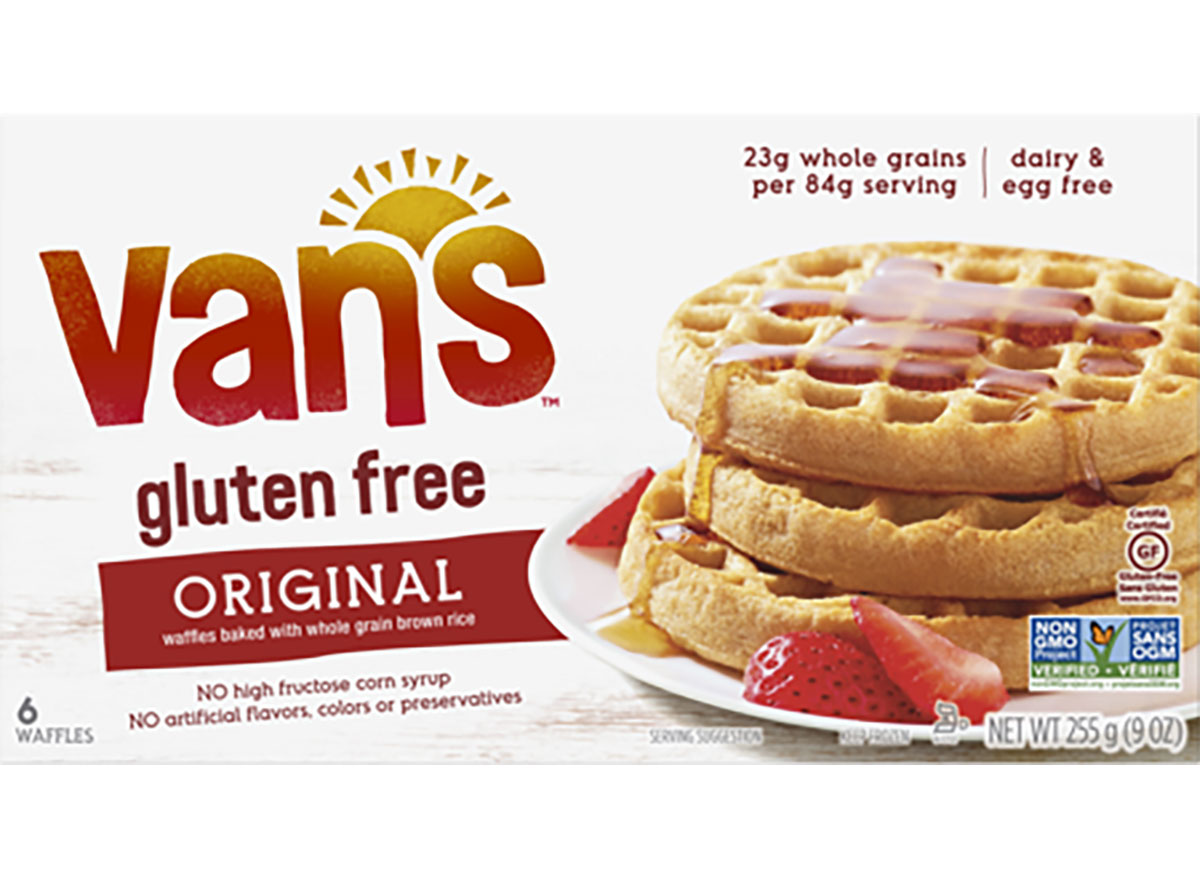 These waffles earned points with our tasters for their texture, but the taste still left something to be desired. One editor wrote that while the Vans waffles have "good texture for a GF version," they do "taste different from 'regular' ones." Another taster wrote that these waffles were "slightly grainy"—but that she'd still eat them.

While our tasters were pleasantly surprised by the Vans waffles' texture, the taste was still bland. One taster wrote that these waffles had "no flavor" whatsoever. "I'd need chocolate chips, butter, AND syrup to eat these," she wrote. 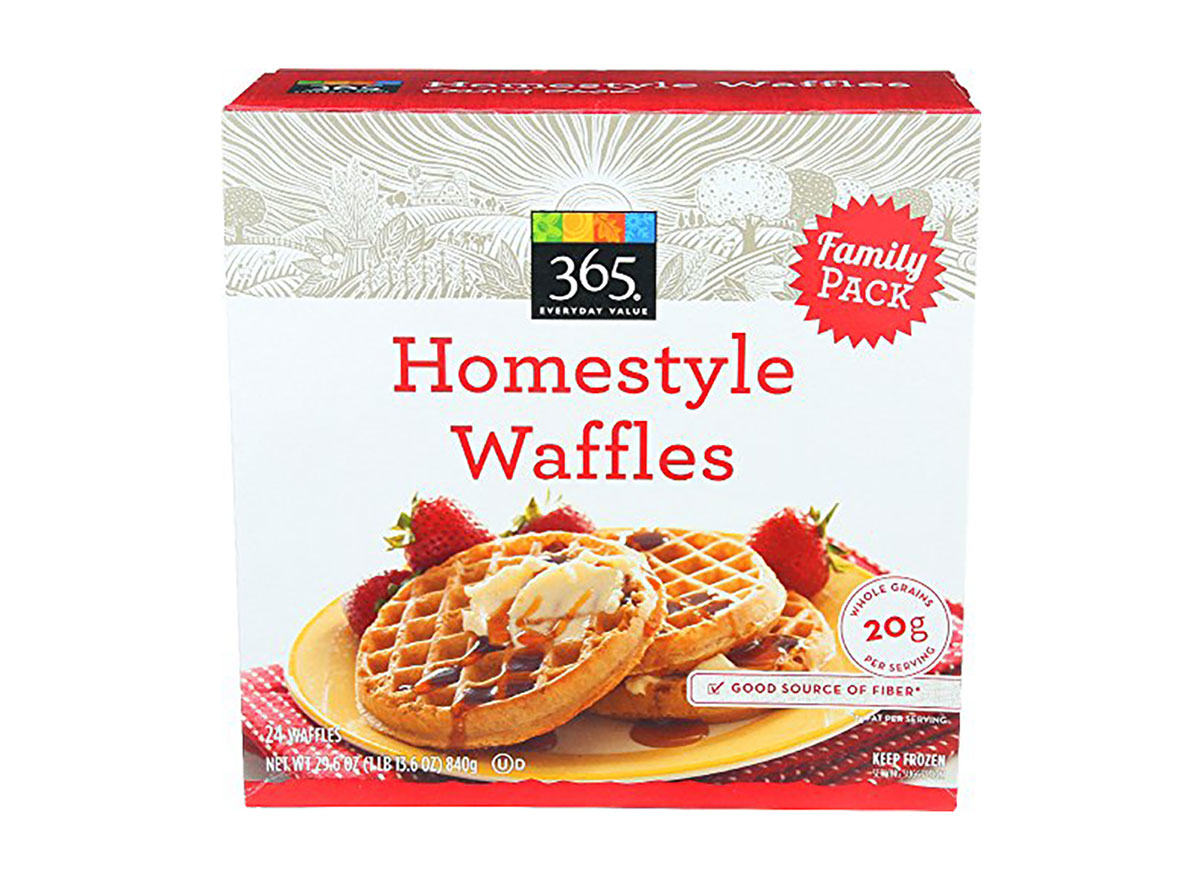 One of our editors wrote that these waffles had a "spongey texture," but she liked that about them. Another wrote that this waffle "tastes and smells like a bland cake cone." The sentiment seemed to echo across the board—these waffles weren't bad, but they also weren't memorable.

There's nothing wrong with these waffles, per se. And for a whole-grain option, they're definitely not bad. But if you're looking for the best frozen waffles on the supermarket shelf, these aren't it, which is why they ended up in the middle of the pack.

And if you prefer homemade waffles, try one of these 20 Healthy Ways to Trick Out Your Waffles. 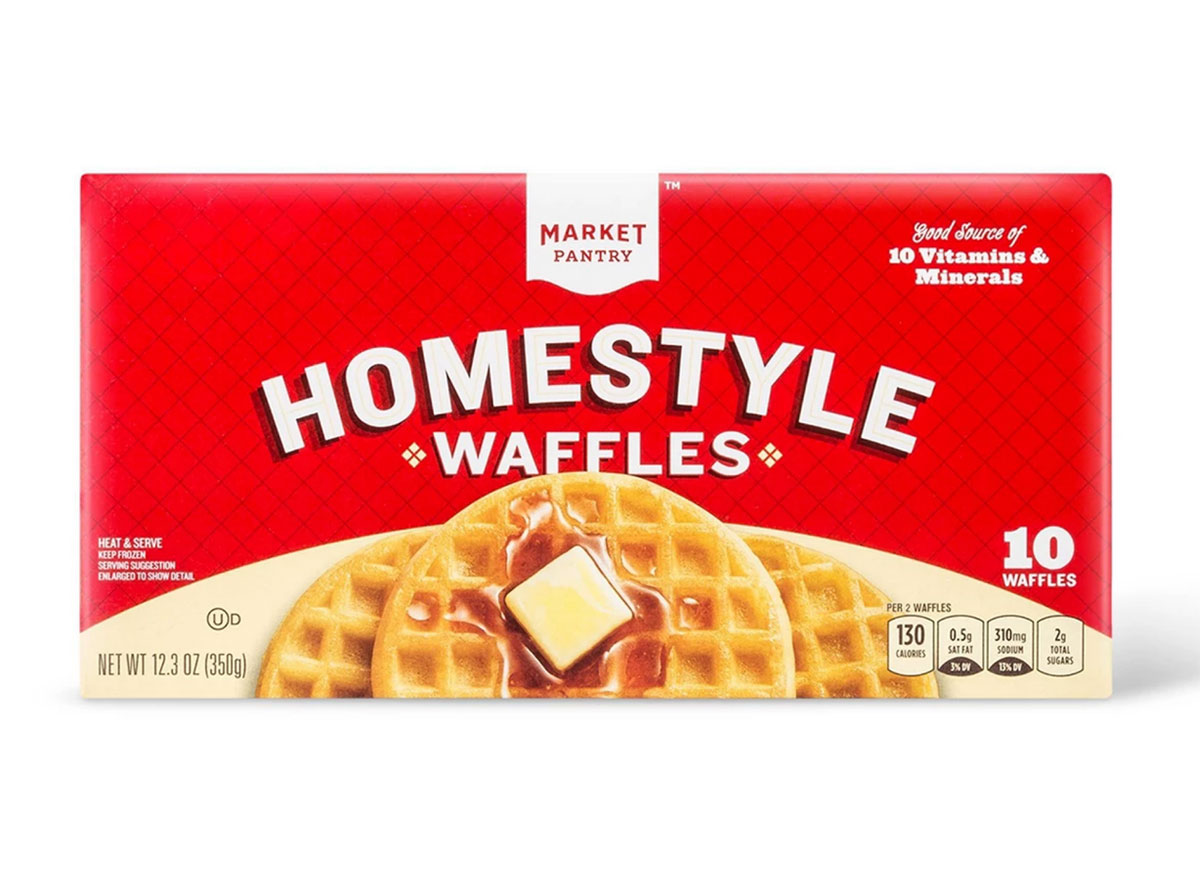 This was another divisive waffle contender for our editors. One staffer ranked this Target brand first, writing that she tried the waffle without any toppings and it "still had a buttery flavor." But another editor wrote that the Market Pantry waffles were "not that special in a lineup."

While some editors liked this waffle more than others, we all agreed it was better than Eggo. If you're looking for that classic taste, this store brand is more satisfying than its name-brand competitor.

RELATED:  The Best Frozen Food as Costco in 2021 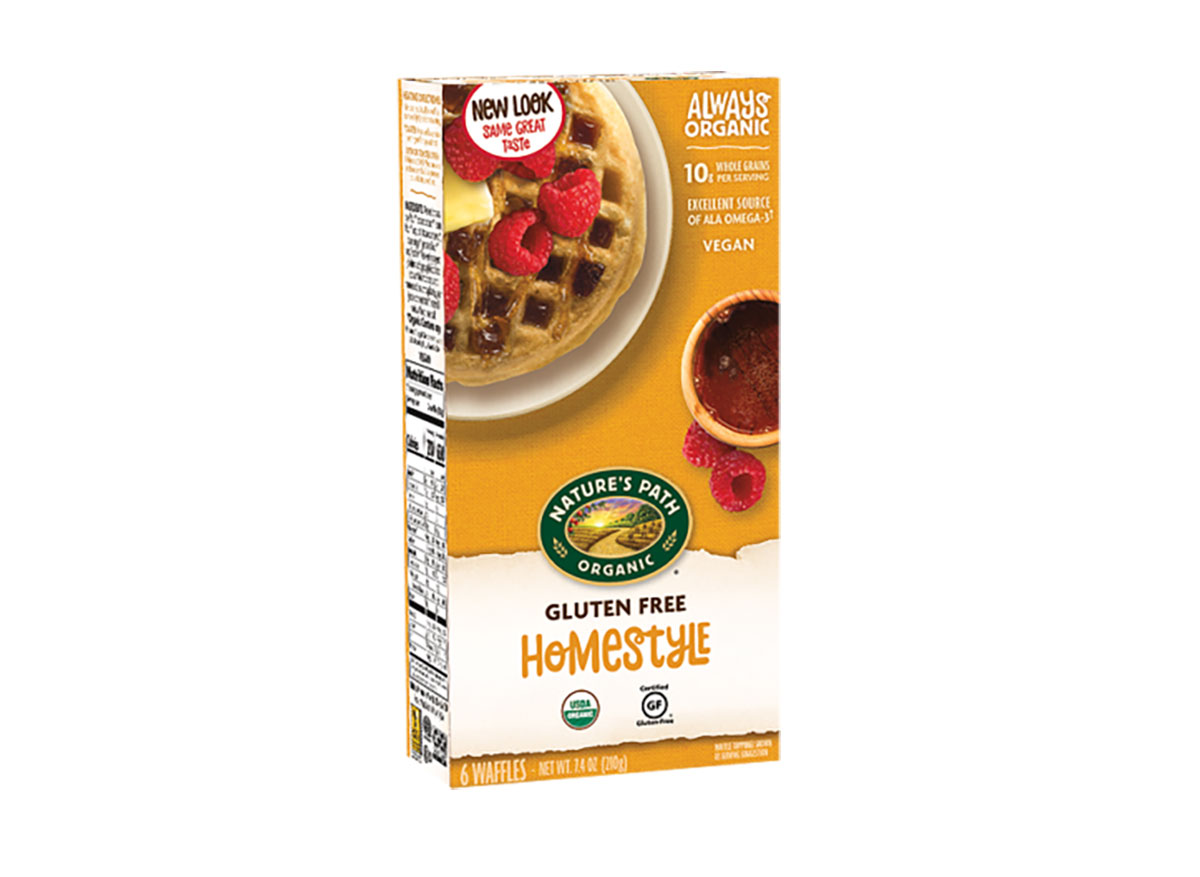 These waffles were a bit sweeter than some of the other options, which gained favor in our editors' eyes. One taster ranked this one in first place, noting that it "tastes like a waffle cone" and that she would eat it plain. Another editor also compared this one to waffle cone batter but wrote that it was "a little too sweet" for her liking. As for the texture, one taster noted that she "wouldn't have known they were GF" if she'd tried these blind.

These waffles are sweeter than some of the others, and they resemble a waffle cone batter in terms of taste. If you want a sweeter option that doesn't taste like vanilla, these are a safe bet.

For a homemade waffle idea, Here's How to Make Tasty, Protein-Packed Waffles. 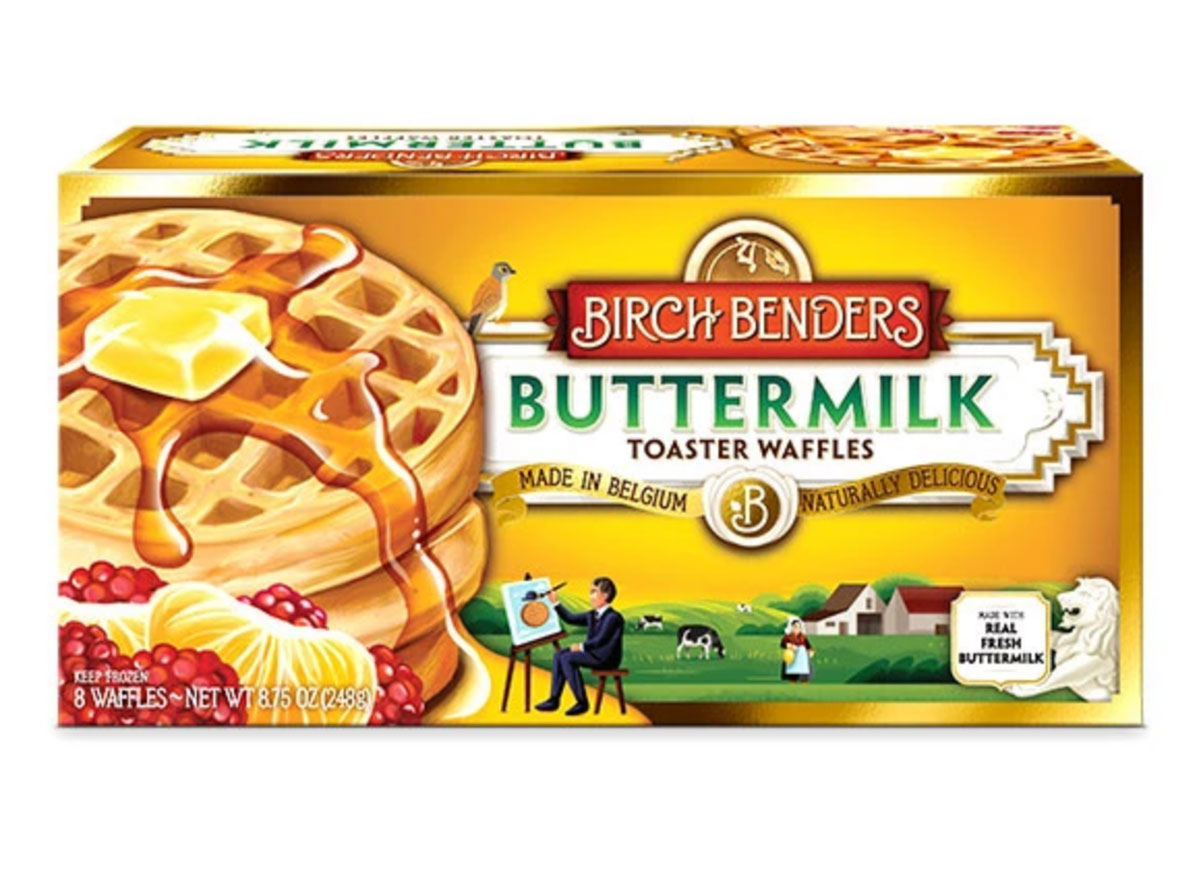 These waffles earned points for their appearance and sweet flavor. The golden-brown treats look like they were just baked; one tester described them as "very pastry-like."

"Even without toppings, these felt like a treat," one taster wrote. "It reminds me of a buttery croissant," another commented. "Great, fluffy, thick texture! Beautiful color."

These round waffles were thicker than their competitors, and our tasters couldn't get over their "beautiful color." Plus, they tasted like an actual pastry, not like a frozen item.

RELATED: The Best Pancakes in Every State

Even though these were gluten-free, our tasters loved their texture, and of course their sweet taste. "Sweet and not grainy!" one taster wrote. "Have a great, sweet taste. Crispy level is perfect—toasts well."

"They had an innate sweetness," another taster wrote. "Classic frozen waffle flavor."

These waffles were sweet without being overpoweringly sugary. And even without syrup, they tasted like a true breakfast treat. "I wouldn't need syrup," one taster wrote. "Nice taste."

And while we love the waffles, steer clear of these 22 Things You Should Never Buy At Trader Joe's. 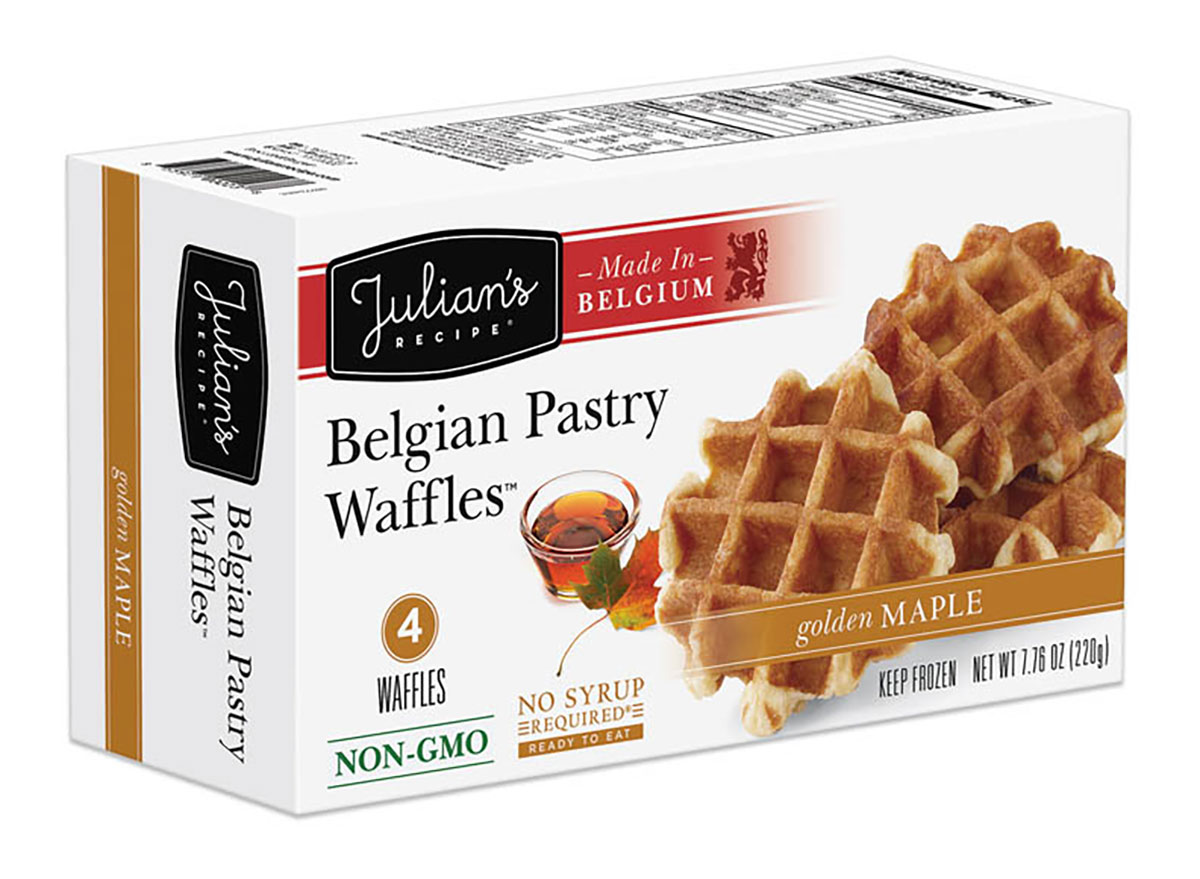 If you're looking for a waffle that's more of a dessert than a breakfast, you can't go wrong with these thick, fluffy Belgian ones. Our tasters raved about the taste and texture, as well as the golden-brown appearance.

"I cannot stop eating this," another taster wrote. A third editor called these "a great weekend treat that's easy to make."

If you're in the market for a frozen waffle, Julian's reigns supreme. These waffles look like they just popped out of an oven, not a toaster, and they taste just as fresh.

Now that you know which toaster waffles rule the frozen aisle, you can make a more informed decision next time you're at the grocery store. And if you want to do a taste test of your own, we can't say we blame you. Prefer to make a homemade breakfast? Don't miss the 19 Non-Waffle Things to Make in a Waffle Iron.

The Best Pancakes in Every State

The Best Egg Dishes in Every State