If you love hot dogs, you're going to want to hear these results.

Hot dogs. You either love 'em, or you pretend not to. Whether you're slapping a few on a portable grill at a tailgate or throwing together a quick meal for your kids, hot dogs are one of the ultimate American comfort foods.

Sure, hot dogs aren't the healthiest thing in the world, but enjoying one every so often isn't too bad if you dress it up with some high-fiber chili or tangy sauerkraut. Plus, no party is seemingly complete without the ubiquitous crowd-pleasing, appetizer pigs in a blanket. So, if you're going to indulge once in a while, why not seek out the best-tasting hot dog you can find?

For the good of the world, we decided to put the most popular hot dogs to the test. Two tasters took eight readily available all-beef franks and pitted them against each other in the ultimate blind taste test. Each dog got zapped in the microwave for 30 seconds and then judged on its appearance, texture, and of course, taste. In the event of a tie, we compared the nutrition labels to determine which was the healthiest.

A note before we jump into the results: All of these franks were very good. Some were better tasting than others, but every one of them would be a hit snuggled in a bun with tangy toppings. The hot dogs we tasted are:

Without further ado, here are the best-tasting hot dogs you can buy, presented from worst to best as judged by two hot dog aficionados. (And if you're looking for something to sip with your snack, check out We Tasted 10 Popular Light Beers & This Is the Best.) 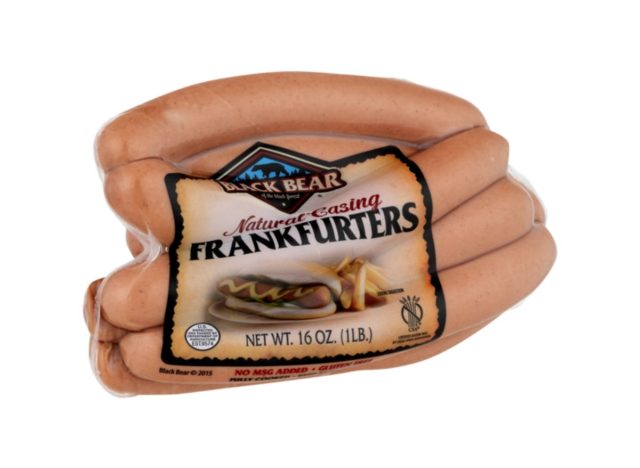 Neither taster disliked the Black Bear hot dogs per se. The franks were good, but the tasters just didn't love them. The flavor wasn't as pronounced as the other hot dogs. Though it was praised for being "meaty," it "lacked spice" overall. One taster also loved the snap of the natural casing, while both commended the texture. 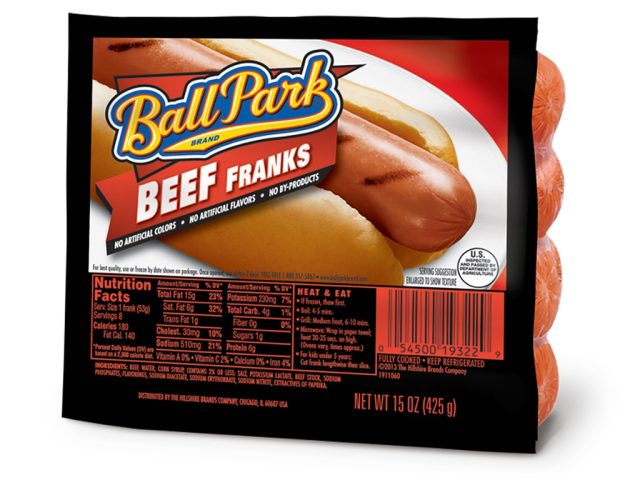 The tasters were divided over the Ball Park frank, with one praising its spicy flavors and "mouth-watering" taste. After noting that this option smelled like a hot dog should smell, the other taster detected an odd, acidic flavor and thought it was too mild. At the same time, they noted this milder frank would be a good kid-friendly option. If the flavor of a Ball Park dog is for you, read on for a better, healthier option for your kids.

RELATED: We Tried 5 Chain Restaurants' Chicken Wings & These Are the Best 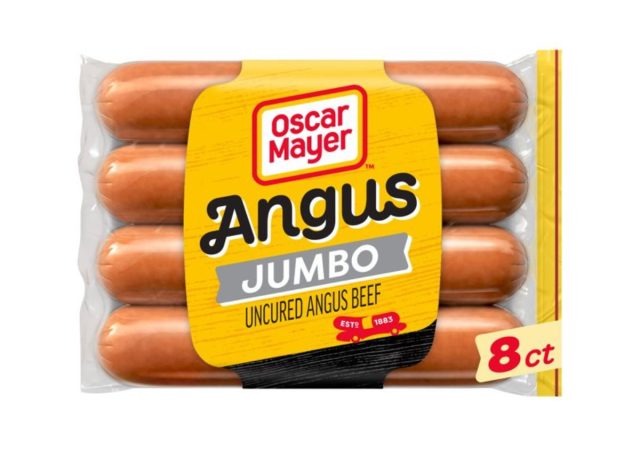 This was another frank that clearly split the tasters. Interestingly, the taster who loved the Ball Park hot dog disliked the Oscar Mayer hot dog and vice versa. The one who liked this frank praised the juicy mouthfeel and lingering spice, noting that the deep flavor would stand up to a bunch of condiments. The other described a "nondescript" taste and thought the hot dog lacked aroma. Both noted this hot dog was soft, without a good chew, and it left the largest grease stain of all the hot dogs on the plate.

Also, a note, while Oscar Mayer technically tied with Ball Park in terms of flavor, it was ranked higher because it doesn't contain any nitrates or nitrites from artificial ingredients. For more on the role of these preservatives in food and possible health ramifications, check out Are Nitrates and Nitrites in Food Bad For You?

RELATED: The Best Authentic BBQ Spot in Every State 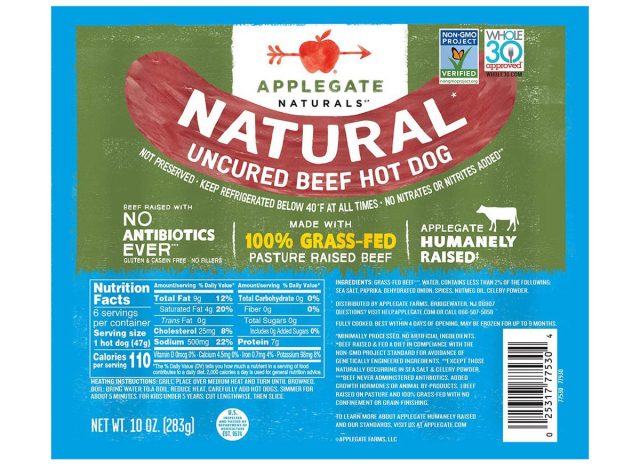 While Applegate's offering technically tied with Ball Park and Oscar Mayer in terms of flavor, this frank had 60-70 fewer calories and 6 fewer grams of fat than the other hod dogs. It also consisted of grass-fed beef and was free of added sugar.

The fact that Applegate tied with two main-stream brands was refreshing. One taster sang the praises of this dog, complimenting it for being juicy and having a "robust" taste and rich, bold flavor. Despite praising the frank for being "very meaty," the other taster wasn't equally won over. They noted it wasn't very spicy and detected an "odd flavor." It's possible that the nutmeg oil was to blame for the latter critique.

RELATED: The Best Chicken Wings in Every State Bar S is one of those hot dogs you might not buy if you grew up with one of the aforementioned heavy-hitter brands. While it tasted good, it does have some problematic ingredients. Both tasters liked the balanced flavors of this frank, calling it "delicious" and "pleasant" with more spices unraveling as they chewed. One could see this hot dog standing up to grill marks and benefitting from a good char.

While the tasters liked the Bar S hot dog, it's far from a nutritional stand-out. It contains a bunch of preservatives like potassium lactate, potassium acetate, sodium diacetate, and sodium nitrite. It also has corn syrup, and these additions dropped it down a few points in the list.6254a4d1642c605c54bf1cab17d50f1e

RELATED: The Best Fried Chicken in Every State 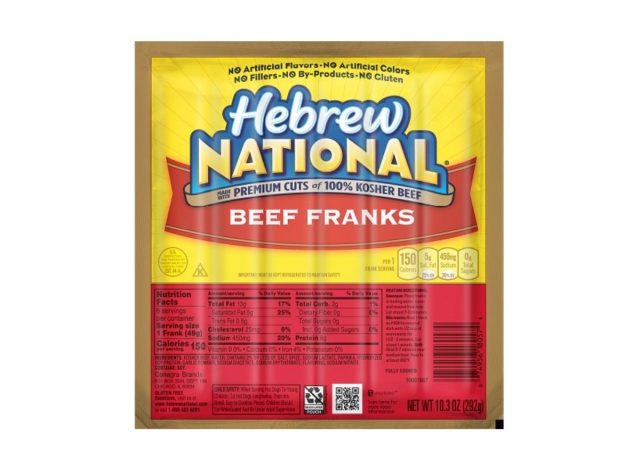 The tasters were getting closer to agreeing on a best dog as they aligned on the Hebrew National offering. Both loved the spice level of this hot dog, actually detecting garlic in the flavor profile—garlic powder happens to be an ingredient instead of miscellaneous spices. This juicy frank had a firm bite but was soft in the center, making it a good candidate for a snack for the kids. This hot dog does contain sodium nitrite and hydrolyzed soy protein, but it doesn't have any added sugar.

RELATED: The Best Hot Dog In Every State 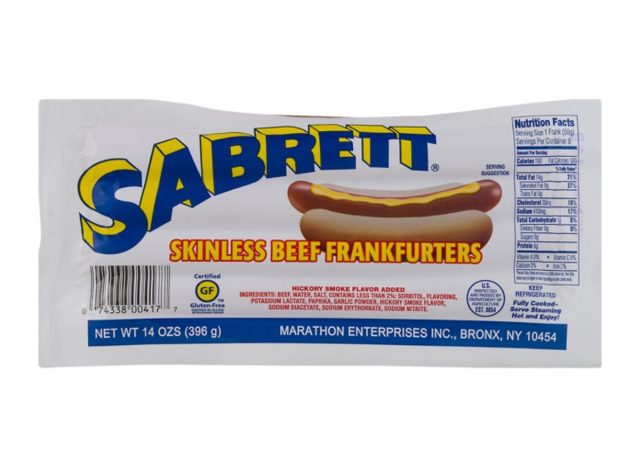 Sabrett is a good frank with a juicy, "succulent" bite that "coats the lips," gushed the tasters. One taster again detected the presence of garlic powder, which is specifically called out in the ingredients. The other said it was "what a hot dog should taste like," adding that it "tasted like childhood." Sabrett had added hickory smoke flavor that wasn't in the other dogs.

The Sabrett frank does have some preservatives and additives that might not be the healthiest like potassium lactate, sodium diacetate, sodium erythorbate, and sodium nitrite—so keep that in mind when choosing a hot dog. Again, these all tasted good, and if you pile on the toppings, you might not notice the subtle flavors too much.

RELATED: The Best Spot to Get a Burrito in Every State 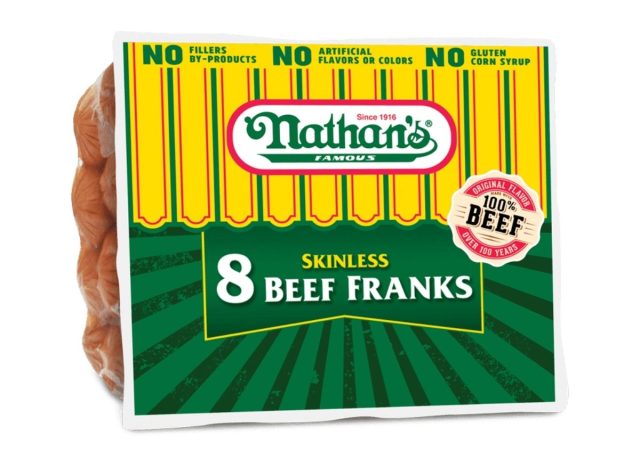 In terms of taste, Nathan's all-beef franks stole the show. Both tasters loved this dog, praising the "juicy, smooth even spices" and "tangy and tasty" flavors. The texture of the frank was firm, but it was also light and easy to bite, ensuring that the hot dogs wouldn't escape from the bun and leave all the toppings behind.

This hot dog did lean heavily on the traditional preservatives of sodium lactate, sodium phosphate, sodium diacetate, sodium erythorbate, and sodium nitrite. Again, all of the franks tasted good, and any of them, even the healthier ones, would hold their own in any hot dog creation you choose to make. A good swirl of spicy mustard and sauerkraut would change the profile of these hot dogs, so feel free to experiment if you're worried about any of the ingredients.

A previous version of this article was originally published on December 13, 2021.

Meaghan Cameron
Meaghan Cameron is Deputy Editor of Restaurants at Eat This, Not That! Read more about Meaghan
Filed Under
Groceries // taste test