Did you order any of these this year?

Unfortunately, this past year, our favorite fast food joints managed to create outrageously unprecedented burgers and freakshakes with way more sugar than the USDA recommends for an entire day. Below, we've unveiled the worst of the worst of 2017's unhealthiest fast food disasters. We're hoping you continue to avoid these meals, along with these unhealthiest foods on the planet in the new year.

Burger King managed to remake mac and cheese, the ultimate comfort food, into a portable snack that might be even worse for your waistline than the original thing. The Flamin' Hot Cheetos-dusted treat, jam-packed with inflammatory vegetable oil and 1,170 milligrams of sodium, is dangerously bloating.

Remember when your social media feeds were infested by Starbucks' cotton candy-colored, glitter-topped unicorn frapp? How could we forget. Good thing this freakshake was only offered for a limited time, because no amount of likes is worth almost 60 grams of sugar!

Although Quiznos' tzatziki-spiked Gyro sub is packed with fresh veggies and a solid amount of protein, opt for the 12-inch and you'll be ingesting over 1,300 calories in one sitting! For those craving the Greek staple in 2017, opt for the 6-inch sub or order it on a slimmer flatbread.

No one ever stops at one garlic knot. Which is why these cheesy twists from Papa John's are especially dangerous. Indulge in three and you'll be looking at enough calories to be considered a meal.

It's served on a fluffy potato bun, the sausage is well-seasoned, and it's got eggs—so what's not to love? This breakfast sandwich will add almost 500 calories and a walloping 29 grams of fat to your plate, an a.m. meal we can do without.

Sure, it's hand-spun with vanilla soft serve and nostalgic Cinnamon Toast Crunch cereal, but did you notice the outrageous amount of sugar in this shake? If you thought the Unicorn Frapp was bad, BK managed to outdo Starbucks by sprinkling almost double the amount of sweet stuff into this beverage. Not to mention, the milky disaster somehow manages to pack in half a gram of artery-clogging trans fat.

As a health rule of thumb, anything that references a monster in its name should be avoided at all costs. Checkers' bacon and cheese-piled burger packs in an insane amount of fat, including FDA-banned trans fats. If that's not enough to deter you from ordering this scary sandwich, the 2,000 milligrams of sodium might.

Leave it to Taco Bell to stack an extra helping of beef piled high with fatty fixin's like cheddar, nacho cheese sauce, sour cream. And it gets even worse: these bountiful ingredients are all cradled in a giant, fried tortilla shell. This pick is clearly better off abandoned.

We totally understand the excitement: nothing screams fall more than pumpkin-flavored everything. But this ring-shaped treat packs in a button-busting amount of calories, sugar, and fat with negligible amounts of protein and fiber. You can do better for breakfast.

Just two bread twists pack in 250 calories and 12 grams of fat, leaving your tummy rumbling and asking for more. There are better ways to satisfy your sweet tooth; just try any of these weight loss desserts.

McDonald's brought back this barbecue fan favorite due to popular demand, but for us health-conscious foodies, this pick is better left unordered. At first glance, the McRib's nutrition isn't one the worst on this list, but its ingredients—such as inflammatory soybean oil, caramel color, and potassium sorbate—deem this a definite no-go. 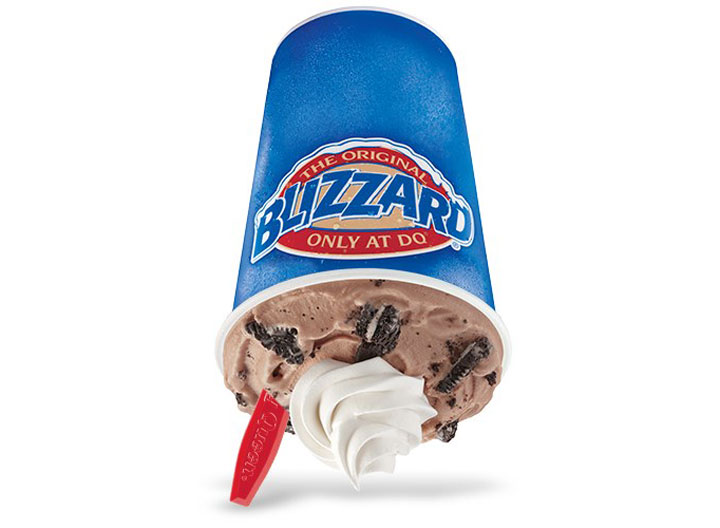 Craving that classic cookies and cream flavor? The last thing you should go for is this DQ Blizzard. The sweet, chocolatey treat taints milk's favorite cookie with an incredulous amount of added sugar and trans fat.

Although this cocoa-glazed doughnut is more caloric than Dunkin Donuts' Pumpkin, Krispy Kreme's treat gets a hard pass due to its sugar and fat count—as well as its seemingly endless ingredient list. If you're at the retro doughnut shop and must indulge in a carby ring, we recommend going for the sugar doughnut, which packs in 190 calories, an impressive nine grams of sugar, and three grams of protein.

Don't be fooled by this breakfast's relatively low carb count and high protein content; White Castle ruins this waffle with an absurd amount of cholesterol-raising saturated fat. And if you regularly wake up to this 'wich, you surely won't witness the inches melt off your waistline.

When the cheese cravings hit, make sure to avoid placing a Pizza Hut order. One sliver of the Margherita Cheesy Bites pizza packs in 229 calories and almost five grams of saturated fat. And trust us, one slice is way too small to satiate you, and you'll end up reaching for seconds and thirds.

Arby's managed to further fatten an already belly-busting dish by packing it into a hearty white bun. This chicken parm rendition is stacked with salty pepperoni, which seriously jacks up the sandwich's sodium count.

Here at Eat This, Not That!, anything with trans fat and more sodium than the FDA recommends per day gets a bad rap. So even if you can find a way to allocate about 600 calories into dinnertime, you're better off foregoing this gooey buffalo chicken melt.

How does a glass of fruity lemonade hide six grams of fat, you may ask? This sugar bomb is spiked with the joint's signature vanilla Icedream (which Chick-fil-A describes as "a delicious, dairy treat with an old-fashioned vanilla taste,") and strawberry purée. Perhaps Chick-fil-A should stick to crafting chicken sandwiches instead.

Stacked with a third pound of baby back ribs and slathered in tangy sauce, there's no wonder why this sandwich is oozing with over a thousand calories and 57 grams of fat. Not to mention, this fast food monstrosity sodium count looks more like your grandkids' birth year than a reasonable nutritional.

Puffier than the OG Crunchwrap Supreme, this Mexican-ish meal is stuffed with beef, nacho cheese, lettuce, tomato, and sour cream—justifying the wild sodium, fat, and calorie counts. If you really want to "Live Mas," pick up some of these healthiest foods on the planet instead.